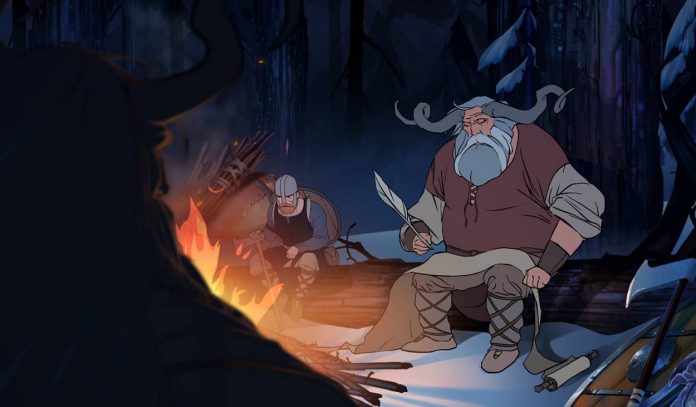 If I were to review The Banner Saga based solely on its excellent setting, lusciously clean graphics and sumptuous music, it would be a 10 out of 10 game. Unfortunately, in other ways, The Banner Saga feels barren and under-developed, leading to an interesting title that is full of potential but often just a bit dull.

Developed by Stoic, a team of three indie developers formerly of the highly regarded BioWare, The Banner Saga marries a branching narrative full of choices, twists and turns alongside bouts of strategical turn0based combat and light resource management. Planned as the first part of a trilogy, it introduces us to a world on the brink of a great war due to a sudden invasion by the Dredge, a stone-clad race feared for their tenacity in battle.

The Banner Saga largely plays out like a visual novel, with immaculately designed characters overlaid on hazy backdrops. Heavily influenced by the likes of gritty fantasy such as Game of Thrones, the story is perhaps The Banner Saga‘s greatest achievement, managing to maintain great pace whilst also creating intrigue and a few genuinely surprising scenarios along the way. More impressive however, is how it makes you care for its bunch of protagonists without reams of exposition. During your time playing playing The Banner Saga you’ll grow to love your ragtag bunch of survivors before having your heart wrenched out by their sudden misfortune, or, in extreme circumstances, even death.

With many of your actions and dialog choices affecting the events of the game, a single playthrough of The Banner Saga can take you anywhere between 12-20 hours. Amongst the growing number of games offering the player “choice”, what really makes The Banner Saga stand out from the crowd is how each of its decisions genuinely feels like a matter of life and death. Like Game of Thrones, you never feel like any character is safe from a quick and unexpected exit, and when you’re not worrying about them you’ve also got to worry about the caravan of civilians and fighters under your supervision. This tension and dynamism creates an experience that you will need  to play multiple times to see all it has to offer, and those who can stomach the tedium of the actual gameplay of The Banner Saga will undoubtedly do so. Spending most of the game fleeing from the advancing Dredge, travel plays a large role in The Banner Saga. Moving from town to town, you’ll be watching your caravan from a side-on perspective, slowly making progress towards to the next destination. There’s a modicum of involvement in these sequences; you have supplies to manage, morale to maintain, and quite often you’ll engage in a bit of banter with members of your caravan, or travellers you meet along the way – usually leading to a choice or two to be made.  Unfortunately these travel sequences can often be quite boring, especially when they tend to be prolonged. It also doesn’t help that you don’t ever really feel fully in control of your caravan’s morale or supplies. You’ll embark on great journeys, never really knowing just how many days they’ll actually take; your soul shattered as you realise that you don’t have enough supplies to make the journey. With hunger setting in, it doesn’t take long for you to start losing members of your caravan due to starvation, and then, inevitably, morale also starts to plummet. With hindsight, it’s an issue that’s easily rectified: you can spend some renown – the game’s single form of both experience and currency, if you will – to acquire supplies at the various merchants between journeys, but it would have been much simpler for the game to just give you an idea as to how long your travels will take.

Being set at the brink of a great war, conflict plays a major role in The Banner Saga; whether it’s with the Dredge that are forever at your heels, or the unscrupulous characters you meet that use the chaos of the unfolding events to steal or exert their power at the misfortune of others. Turn based, in a similar vein to titles such as Final Fantasy Tactics and Disgaea, combat is initially interesting, with a basic but solid system of strength versus armour. With you and the enemy taking turns to move your combatants one at a time, on any given turn you may move and perform a single action, such as attack or use a special ability. Where The Banner Saga is unique however, is in its emphasis on reducing your opponent’s armour in order to make them more susceptible to attacks. Hulking brutes are often nearly impervious to all but the strongest of warriors’ blows, but by focusing on wearing away at their armour for a few turns they may be felled by even the modest of men. The movement range and damage of each of your fighters may also be increased by expending willpower – a limited resource that can be replenished to some degree as you defeat your adversaries – but it’s always scarce enough that using it becomes a vital element of strategy. All in all, it’s a novel combat system, but it’s one that never feels like it fleshes out as you progress through the game, leading to battles that eventually feel repetitive and unrewarding. Other issues also rear their head with regards to combat too, like the fact that you can’t rotate the camera, or cancel a character’s movement that may have been in error, despite not yet taking an action. The biggest problem with The Banner Saga’s battle system though, is that it is sorely lacking in character customisation and development. From the moment a character enters the battle roster, they’re likely to stay pretty much the same until the end of the game, unless of course, they get killed off prematurely.  You’re afforded a limited opportunity to increase their abilities somewhat – you can rank them up by accumulating a certain number of kills before spending renown to promote them – but when renown is also used to purchase supplies and accessories, you often won’t have enough to do so. If you do somehow manage to accumulate masses of renown by being victorious in battle and selecting certain dialog choices, you can choose to rank-up each of your battle-hardened warriors up to four times, granting them eight additional attribute points overall as well as upgrading their personal skill and allowing them to equip a higher rank accessory. With a team of combatants all at rank four or five, you’ll certainly find the battles a little easier to handle, but not to the extent that it will feel like the expense was worth it. It would have been nice to be able to buy weapons and armour to equip in addition to your solitary accessory, perhaps with good old-fashioned coins that everyone seems to have forgotten about, but alas, you’re unable to do so, resulting in character development and combat that feels very bare-bones.

So, aside from the often dull travel sections and the underdeveloped and repetitive combat, is there anything else for me to complain about. Well, yes, actually. Growing up playing the likes of Final Fantasy VII and Suikoden in the 90s, I’m no stranger to reading masses of text, but in 2016, The Banner Saga’s lack of voice acting is just undeniably disappointing. You sit there, reading conversation after conversation, thinking just how much better it would be if the characters actually had a voice. Thankfully you at least have Austin Wintory’s fantastic musical score to listen to whilst you’re reading. Finally, my last gripe is that I encountered a rather irritating bug whilst facing the final boss of the game. Playing on PlayStation 4, were I to unceremoniously fall in battle, selecting the option to restart from the last checkpoint would cause the game to crash, repeatedly. Luckily the game’s autosave system meant no progress was lost, but it was a pain nonetheless. Hopefully the issue will be quickly resolved via a patch.

Judging by the fact that my review seems rather negative, you may think that The Banner Saga is a game to miss. Strangely though, it’s not. Sure, sometimes the travel sequences can be boring and the combat isn’t quite as fleshed-out as other games in the genre, but it still has that certain je ne sais quoi that makes you want to push on until you make it to the end. Many of the game’s issues are no doubt down to its meagre budget, leaving you with the feeling that with more time and money, The Banner Saga could have truly been a masterpiece. As it is, it’s a game that certainly has issues, but also one that manages to enrapture you in its gritty world of turmoil thanks to its compelling storytelling, visuals and music. And with the second part of the trilogy due out this year that promises to improve both the combat and caravan management, it’s an adventure worth investing in for fans of fantasy.