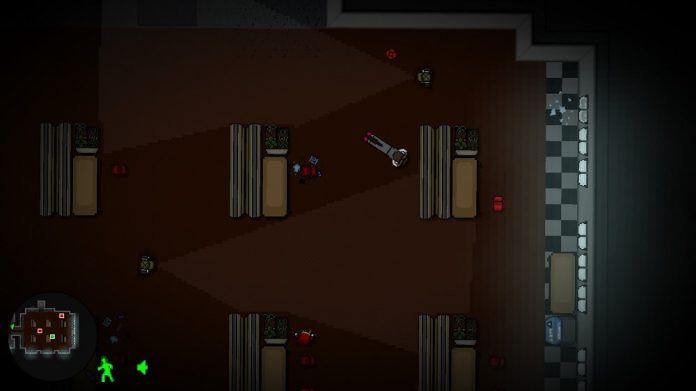 “Hostile takeover” is a term most people are familiar with. But this is a literal hostile takeover, with guns, flamethrowers and dogs all courtesy of your rival corporation. Imagine a corporate version of Hotline Miami if it wasn’t on ANY drugs, and you’re close to Turnover.

Bought to us by developers Long Division LLC, Turnover is a top-down 2D stealth game where one corporation suffers the most extreme hostile takeover imaginable, and the police don’t seem to mind in the slightest. The sole purpose of the game is to survive and escape, by sneaking around levels. Well, until you can fight back but then you still have to sneak, but not as much. Confused? Let me explain. For the first few levels, you are unarmed and have to rely on avoiding detection to navigate the levels. This is made possible by all enemies having highlighted vision-arcs and appearing on your mini-map. Your level of noise is shown, and if you’re spotted, those vision arcs will go from neutral white to angry red. As a bonus, if that vision arc belongs to a person, then it’s angry red filled with grey bits moving at very high speed. Enemies can hear you and also see you, so you have to become acutely aware of how much noise you make. Even throwing items as distractions is not always a guarantee they’ll go where you want them to, as throwing the item makes noise. If they are alerted, then their vision range increases and they appear to hear you easier. It makes you feel vulnerable and quite alone.

You’re not always alone, though. You can recruit your colleagues to disable computer systems or automated turrets (it’s a serious hostile takeover) and even employ “Rent-a-cops” who’ll take down patrols who wander into their path. With those in mind, your enemies will work together to track you down and flush you out, so it’s a constant power struggle to gain the upper hand which is good! It gives tension to the game. The game is quite lengthy too, boasting an impressive 29 levels to test your patience and ability to remain silent. The levels themselves are surprisingly detailed, if a bit similar, and the animation appears to be a little choppy. Fortunately, this does fit with the overall theme of the game’s visual design in a retro-pixelated way, nevertheless smother animation would have made the design shine. The first few levels are a little dull in the visual department, but given it’s a corporation office block, it does actually fit quite well with the theme. Later on, the colour and variety comes out, with visual effects really popping out and generally being visually pleasing – when they aren’t killing you. It’s a similar story with the sound too; it fits with the game’s feel but crisper sound effects for events, cutscenes and the characters would not have gone unwanted. It’s not that I don’t like the sound, more so that retro-styling doesn’t necessarily require retro-effects. There are so many times you can hear a muffled 80’s video game effect before it starts to grate. It’s okay, we have surround sound and studio-quality headphones, we can take modern sound effects and music. Speaking of which, Turnover comes with an FLAC version of its main theme, which is something I wish more games would do.

Visuals and sound aside, I’m sorry to say that the game does have some issues that taint its otherwise enjoyable nature. From the off, Turnover doesn’t hold your hand aside from teaching you the basics, and that’s fine. Games work well when you learn through playing them. However, putting you in situations you’re not prepared for or forewarned about is just unfair when you’ll be insta-killed by most enemies. There’s no way to save progress other than finishing the level, so regardless of how far through you’ve gotten, if you die, then it’s back to square one. And you’ll die a lot. You can get perks to help you evade detection and defeat enemies, but it never gives you much of an edge. The rent-a-cop additions are the best defence, as they’ll kill anything they see, but don’t expect much help beyond killing a few dogs and the occasional guard. Sneaking is your best hope, but what counts as cover isn’t overly clear. In all honesty, I don’t even know how the game ends because I didn’t finish it. Call this lazy, unprofessional or whatever you will, but the truth is I got so bored and frustrated with it, I just gave up. There were too many instances where you would get killed that were simply unavoidable, and when these deaths cause you to start back at the beginning, it brings the gameplay to a grinding halt. For example, interacting with computers alerts the guards, but there’s no indication it initially will. You only find this out when it happens, and then you get shot. This may sound like more of a personal issue than a gameplay issue, but let me explain another aspect. In many instances, you will come across dogs. Now, as with all enemies in this game, you can see their line of sight (coloured yellow instead of white) but even if they can’t see you, they can still “find” you which means any patrols will also find you. And then it’s game over. There’s no clear distinction on what the limits of the dogs’ vision and hearing is, so it’s a case of trial and error. They growl if you’re too close, but that’s it. They can even find you if they aren’t on the screen, there’s no vision-indicator and you’re behind cover. This would be fine with either prior warning – no matter how simple – or if the game let you save progress.

This brings me onto the main reason why I didn’t complete Turnover: it is just too unforgiving. The levels become far too long for the difficulty and the initial sense of challenge is quickly replaced by anger. The enemies have set paths and clear vision lines, but you’ll still be placed in unavoidable death situations when entering new areas, even within the first few levels. The emphasis throughout has been about stealth, and that works. It works fantastically despite it being a bit slow at times. You do become conscious of how much noise you’re making, but cover isn’t clearly defined. What has provided cover on previous levels doesn’t on the later ones. I want to like the game, I really do. But it feels like it just punishes you for things you don’t know and it doesn’t tell you. That can be part of the fun, and certainly part of the challenge with games that don’t hold your hand, but there is a limit – and Turnover sadly goes beyond it.

If you enjoy remaining motionless in the shadows and learning patrol-paths for hours on end, then buy it, unlock hard mode and go insane. Bear that in mind and avoid if you’re looking for anything else.

Turnover is available on PC.