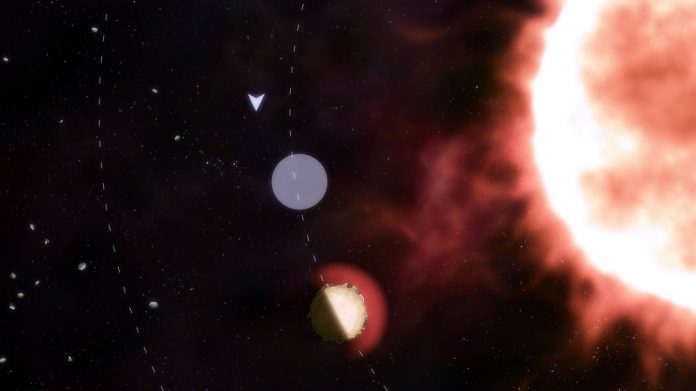 You awake alone on a mysterious planet. You don’t know who or where you are. Your only companion is your ship’s computer, ZING, who tells you the only way home is to jump between solar systems and hope you get lucky.  Trapped in an endless vastness, your only goal is to make it back and make Amazing Discoveries in Outer Space.

Amazing Discoveries in Outer Space (or ADIOS) has a dramatic premise, but one that is lost quickly in its slow and tranquil gameplay. Little focus is placed on the mysterious circumstances that caused you to crash on an unknown planetm and your first goal of getting back to your homeworld is seldom mentioned. Instead of a plot concentrating on hopelessness and desperation, ADIOS is a journey where discovery is not just the name of the game but the objective; a journey that will take you through many strange and wonderful solar systems.

To fuel your engine to allow you to reach new worlds you must first fill your “Discovery Meter”. Filling it is easy, in theory. Everything you do will net you points: flying to a planet and finding lost cargo; finding ancient rocks filled with minerals or fossils; or meeting the local aliens – some of whom will try to eat you. If that doesn’t sound dangerous enough, try weaving your way through asteroid belts to find derelict space stations or destroyed satellites. Or, if you feel just a little brave, try getting close and scanning the nearest sun (though I wouldn’t recommend it).

Unless you are a complete sucker for danger, you will often find yourself focusing more heavily on exploring planets rather than asteroid belts. Although this isn’t just due to the higher abundance of supplies or risk associated with careening yourself through asteroids: you’ll often find yourself lured towards them thanks to their colourful watercoloured design, adding a sense of charm not often found in other randomly-generated worlds. A special mention must also be given to the victory song played whenever you complete a solar system which, while seems an odd choice of 80’s disco-funk adds to the overall quirky nature of ADIOS. 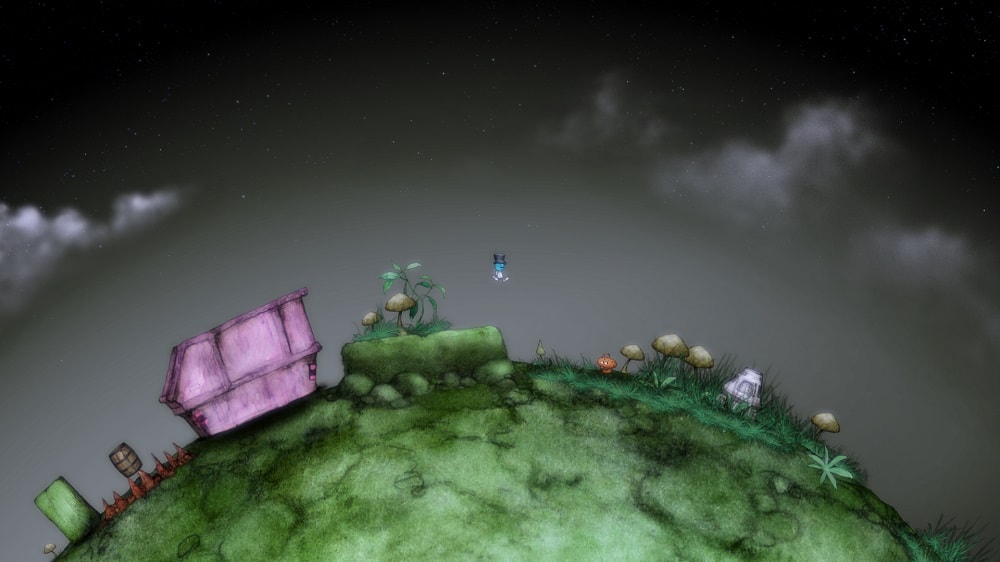 With Amazing Discoveries in Outer Space being a roguelike, death is all too common. Most playthroughs will take you between 10 and 45 minutes before you meet your grisly end. The game will not, however, grip you in your first venture through the universe and will feel – rather ironically – a little empty. For me, this was due to many features not being unlocked straight away, such as the use of the grappling hook or being able to exit your spacecraft and explore on foot. After one or two tries however, most basic gadgets will be unlocked and you will be able to enter and exit your vehicle, allowing you to freely explore planets looking for more things to discover.

When outside your craft is when the platforming elements of Amazing Discoveries in Outer Space come in. Some pieces of cargo are in hard-to-reach areas and you must use a combo of jumping and jetpacking to reach them. While the platforming elements themselves are basic, it is the addition of outside forces that make ADIOS truly unique. Every single planet (each randomly generated in every playthrough) features its own unique terrain, gravity and time of day meaning there are many ways for you to die. You may end up on a volcanic wasteland and burn to death; or you may be forced to explore during the night and stumble across a giant monster in slumber and accidentally walk straight into him. On rare occasions, the gravity on a planet may be so low you jump once and fly off into space.

In my own experience however, I have rarely succumbed to any of these forces. Instead, nearly all your deaths are likely to come from one of two things: running out of fuel (which becomes more common the further into the game you make it), or accidentally crashing into a planet when trying to land. I say “accidentally” because crashing is not due to the difficulty of solely piloting a spacecraft – which is in fact, surprisingly easy – but rather, due to an imposing camera. You may have spent awhile boosting your spacecraft perfectly so the gravitational pull of a planet will help you towards it, only, to find when you reach said planet, hurtling at high velocity, the camera suddenly zooms in and turns upside down causing you to speed to your rather explosive death.

Amazing Discoveries in Outer Space is an odd game. For a journey that can often be so tranquil, death will come quickly and suddenly (and sometimes unfairly) – but you will want to return. Like many good roguelikes, the sense of exploration and wanting to do better will drive you forward, although you may find yourself wondering if going from planet to planet is all ADIOS has to offer. For a genre with a universe of possibilities the Cosmic Panic team have possibly aimed too high but instead of crashing and burning, they manage to fly leisurely and create an exploration of space that, if nothing else, will keep you entertained for a good few hours.

Amazing Discoveries in Outer Space is available on PS4.