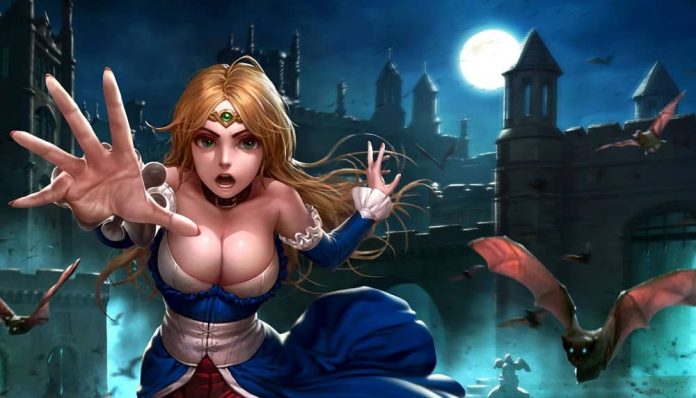 Have you ever played a 2D Castlevania game and thought, “what this series really needs is bigger boobs and the ability to throw your enemies’ lukewarm corpses”?  Wait… what, you did? Well, you’re in luck, because that’s exactly the kind of action Amazing Princess Sarah provides – and the best thing? It’s actually pretty good!

Channelling the very essence of the Castlevania series, Amazing Princess Sarah has you hacking away at the undead and other monstrous denizens of five sprawling castles. Your ultimate aim isn’t to take down Dracula however, that would encroach just a tad too much on Castlevania’s turf; here your goal is to defeat the evil succubus called Lilith that has kidnapped your father, the king.

With its three button combat system, playing Amazing Princess Sarah is simple. You have one button to jump, another to swing your sword (there are no whips here I’m afraid!), and finally a button to pick up objects – including recently killed enemies – and throw them. It’s this throwing mechanic in fact, that is Amazing Princess Sarah’s most interesting gameplay aspect. You see, whilst thrown objects like rocks and bombs behave just like you’d expect they would, throwing enemies’ corpses can have all sorts of weird and wonderful effects that create some element of strategy. Throwing demonic archers for instance, creates a cavalcade of arrows that reign down in an arc, and easily killed bats become dangerous projectiles that can be thrown far. The best of all though are the flying female demons that do serious damage to every enemy on screen. Clever gamers then, will make use of enemies’ dead bodies effectively, defeating the castle’s miscreants from a distance where possible, and using the best cadavers available in any given situation. 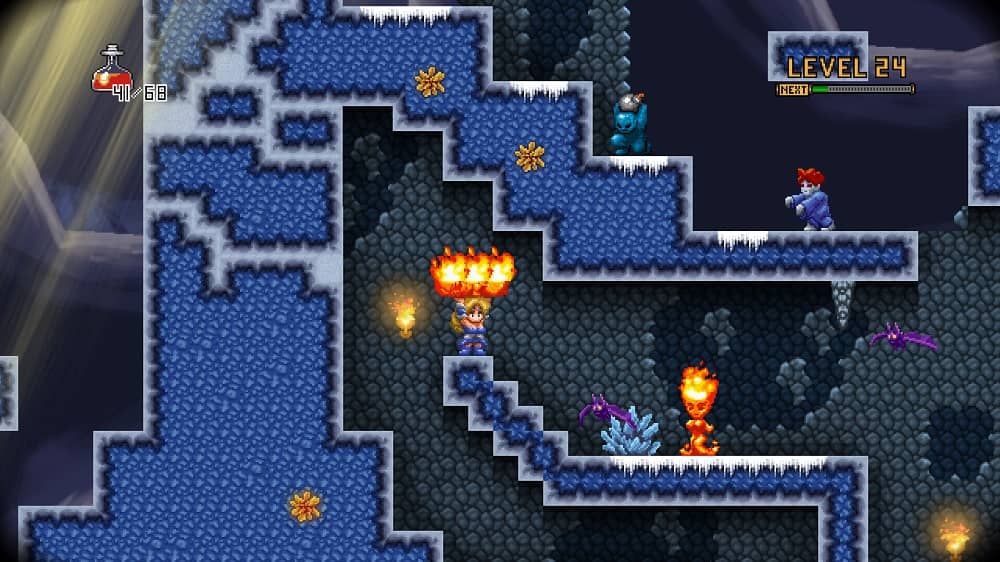 You should think of each castle in Amazing Princess Sarah as just one big level, taking around 20 minutes to an hour to complete on your first attempt. That means it’ll take around three hours to play through all the castles on your first try, and you’ll just about enjoy every minute of it if you like old-school platforming action with a bit of basic combat thrown in for good measure. Of course, each castle also has its own boss for you to take care of too, usually gargantuan in size, but if you want to defeat the nefarious Lilith and truly complete the game then you’ll have your work cut out for you, as simply playing through the game once is not enough.

Significantly boosting its longevity, Amazing Princess Sarah has a whopping six new game plus modes in addition to its standard normal mode, each with their own gameplay modifications and of course, boosts to your enemies’ levels. The first new game plus mode for example, has a ghost of Sarah that chases you through the game, edging ever closer when you’ve got your back to her and doing damage if she makes contact with your fleshy form. Other new game plus modes on the other hand grant enemies the ability to respawn, make our amazing princess continually lose health, or even take away her ability to use a sword altogether. Rest assured, each new game plus mode adds a unique and interesting challenge that is sure to make going through all the castles multiple times a refreshed experience.

If you’re worried that Amazing Princess Sarah may get too difficult for you before you’ve made it through all five castles then never fear: you’ll be happy to know that it employs a very lenient checkpoint system. Well placed throughout each castle, meeting your demise at the hands of a foul foe or a pesky environmental hazard will worryingly admonish you with a game over screen before returning you to your last checkpoint relatively unpunished. Granted, you may have to repeat a short section to get back to where you were, but the checkpoints are never really too far away from each other for it to be a real bother. Amazing Princess Sarah also employs a levelling system, meaning that you gain experience for every enemy you defeat until you have enough to level up. Handled automatically, levelling up offers a nice boost to your hit points and strength which makes your adventures in the castle just that bit easier as you become more seasoned.

Amazing Princess Sarah is a game that is hard to find fault with really, apart from the fact that it’s generally just quite derivative. Heavily borrowing elements from Castlevania, it’ll appeal greatly to fans of that particular series and even those that just fancy a good old fashioned platformer. It’s not going to impress you with its generic graphics or mediocre music, but it’s going to entertain you with its challenging and addictive gameplay, complete with its quirky throw mechanic. In the end then, Amazing Princess Sarah isn’t particularly amazing, but it is bloody good fun.

Amazing Princess Sarah is available on PC and Xbox One. We reviewed the Xbox One version.