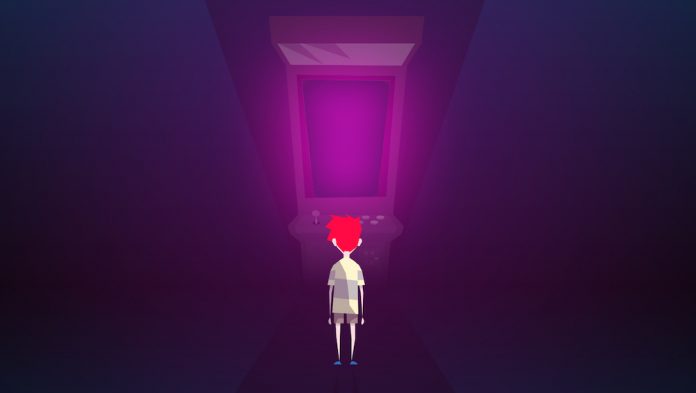 Between Me and the Night isn’t what you expect, but that is exactly how it’s supposed to be. It is the story of a young man struggling with life and reality, walking along the edge of insanity. He is plagued by the demons and ghosts of his past, of which we can’t be sure whether they exist only in his mind.

Between Me and the Night is marketed as a surrealist action adventure game, but to me, it’s more of an exploration and puzzle game. As the young, flame-haired protagonist, you begin by exploring his childhood house. For some reason the house is abandoned, but the ghosts of the people he loved still linger there. It is never explained exactly why the house is empty, but you can imagine various scenarios as to why. As you explore, it becomes clear that not everything is as it seems.

Almost every object in this house holds a story. Everything in sight is interactive, so long as it is within reach of the protagonist. Once clicked, it gives an insight into the character and his relation to the object. Many objects you come across are needed to progress further through the storyline, so you’re never quite sure what to take with you in your six slot inventory.

The style of animation is minimalist yet beautiful. The colours are bold and blocky, which I think works really well. The face of the protagonist is intentionally blank, as if he has lost all sense of identity.

There are minigames in the form of retro arcade games found on Gameboys and NES consoles. Each of these is knight-themed, although even now I am unsure how it connects to the storyline. In theory it’s a nice concept, but in practice the minigames themselves are somewhat annoying. Luckily you don’t need to complete most of them to allow you to progress through the game.

The controls are easy to manoeuvre – except in the knight minigames where they feel clunky and uncoordinated. You use the WASD keys to move, the shift key to run and E to interact with objects: nice and simple.

The first level of Between Me and the Night by far the largest; with three floors to the house and numerous rooms to explore, it took me over an hour to complete. Unfortunately from there, each level gets progressively shorter and less interesting; the second took slightly less time, and by the third level, it was barely a 10-minute run through. Each chapter is segmented with a knight minigame.

The sense of loss and loneliness in Between Me and the Night is present throughout. The ghosts that reside in the house usually disappear as you approach them, as if your character can never be with them anymore. There is no speech or narration at any point; the story is told entirely through script on the screen, which separates him further from any true human contact. Because of the borderline madness of the protagonist, practically anything can happen. A part of the house that was normal on your first visit can later yield new discoveries or strange monsters when you revisit. This helps to keep the game refreshing and exciting, but sometimes it leaves you frustrated and with little sense of direction.

Each level of the game contains various monsters, that are unique in design – but very irritating. Because you rarely expect them to be there, you don’t have much of a chance to run away or any way to avoid them. Usually they stand in your way, eat you and send you back to another place.

Upon completing Between Me and the Night, I was left rather confused – I didn’t get it. The ending links the story of the game to real life, but it doesn’t attempt to explain the relevance of the knights. However, seeing as on completion of the game you receive an achievement entitled “I don’t get it”, I figure that the developers intended to leave you with unanswered questions.

Overall, Between Me and the Night is a fun side-scrolling exploration game that enters the mind of a teen struggling with life. The themes of troubling thoughts and the social anxiety of growing up are something that we can all relate to in some way so helps engage you in wanting to play more. Sure, the game isn’t perfect and has a few flaws – the ending is disappointing and the minigames feel quite pointless – but they are forgiveable simply because the game is fun, with a storyline and gameplay that are thoroughly enjoyable.

Between Me and the Night is available on PC.