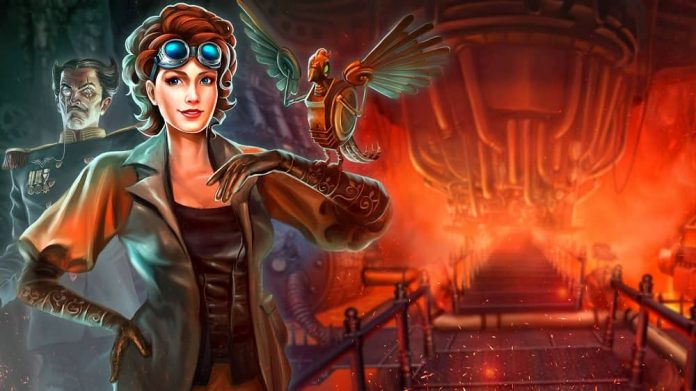 I have to confess something: in my misguided youth, I spent far more time than I should playing downloadable PC “hidden object” games.

I was a sucker for their dull yet soothing repetition; never tiring of endless quests to spot spyglasses, parasols and boomerangs amidst chaotic and messy scenery. Then, when I spotted Clockwork Tales: Of Glass and Ink on the Xbox One store, I did a little whoop for joy. At last, a guilty pleasure on console!  After gleefully devouring the game though, there’s no reason to feel guilty: Artifex Mundi’s Clockwork Tales is much more than your run-of-the-mill hidden object game. It’s a fully-fledged adventure puzzle game that’s well worth your time.

Clockwork Tales: Of Glass and Ink takes place in Gottland, a mysterious steampunk land fraught with terror under the power of Gerhard Barber – the steam revolution’s answer to Hitler. As the game begins, you find yourself in the shoes of Evangeline Glass, a young and inquisitive secret agent who has just arrived in the strange town of Hochwald, where she’s to meet up with a Dr. Ambrose Ink. A great scientific mind, Ink has set himself the task of unearthing Barber’s nefarious plans. Unfortunately, before he gets chance to relay his findings to you, he’s snatched from his hotel room by a giant robot and marched up to the evil Gerhard Barber’s castle. Yes, there are giant robots, steampunk pseudo-Nazis and even a mechanical raven as a sidekick. This certainly isn’t your usual generic adventure-in-a-small-town, no sir-ee.

Much like most games from the hidden object genre, environments are displayed to you as static screens, with minimal animation applied to certain elements. The graphics are hardly the most hardware-burning, but every scene is meticulously detailed and very pretty to look at. The hand-painted locations are simply gorgeous, filled with colour and character, and every new scene is just as impressive as the last, whether its a snowy village or the bowels of a diabolical steam-powered machine. There’s no shortage of different environments to explore either – you will find yourself retreading old ground occasionally, but the game regularly introduces new areas at a steady pace to keep it from getting boring or stale.  The visuals are accompanied by a pleasant soundtrack that perfectly complements each location (and the looming danger). 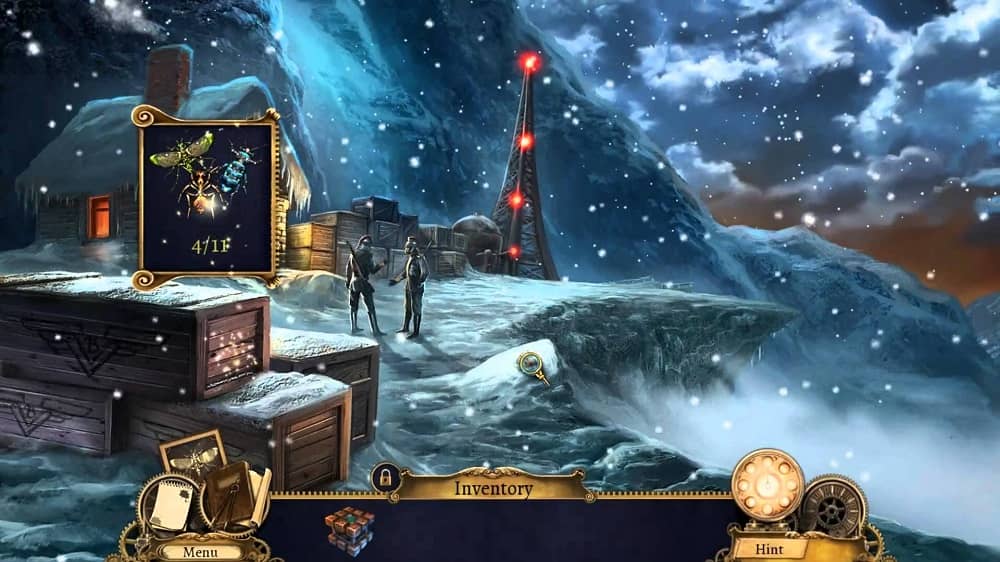 Gameplay of Clockwork Tales: Of Glass and Ink is simple, but very engaging. Primarily a point and click adventure, you move your cursor around the screen until you find objects to interact with. You’ll either find an item you can pick up and add to your inventory, or clicking will reveal a closer inspection of a particular area, often with a puzzle or minigame attached. The puzzles are incredibly well thought-out and varied. Of course there are the obligatory hidden object puzzles thrown in for good measure, but these are sparse and well-spaced, bolstered by much more brain-intensive puzzles that really do require you to think. There’s a great variety, from piecing together torn pieces of paper, joining together wires in a circuit system, unlocking complicated locks and mixing together your own cocktails. Nothing is ever too complicated, but should you ever get stuck, the game has a built-in hints system that constantly recharges throughout the game, so you never need to feel at a loss for too long. You can also skip a puzzle if it just proves too much to bear… but, y’know, don’t do that.

The biggest downfall of Clockwork Tales: Of Glass and Ink is its playtime. I completed the game – and gathered all its achievements – in a rather conservative four hours, and was left bitterly disappointed that it was over so quickly. Still, my eagerness to play more is only a testament to the overall enjoyment and satisfaction of the game. It may be short, but there is a lot packed into its brisk running time. Unfortunately, there isn’t much reason to replay the game once you’ve finished, unless you simply want to relive the story and replay the puzzles. There is a choice of difficulty levels, but the harder of the two merely limits the amount of hints you receive, and penalises you for excessive clicking.

If you’re a fan of good old-fashioned puzzles to sink your teeth into, then Clockwork Tales: Of Glass and Ink will certainly satiate your brainteasing desires – for a few hours at least. Whilst it’s not the most original take on the point and click genre, its unique steampunk angle makes the story more captivating than most, and the gorgeous hand-painted graphics make it an altogether worthwhile experience. It’s a shame it’s such a short experience, but it’s one that is thoroughly enjoyable from start to finish, and will leave you wanting more. At least, it did me.

Clockwork Tales: Of Glass and Ink is available on Xbox One and PC. We reviewed the Xbox One version.