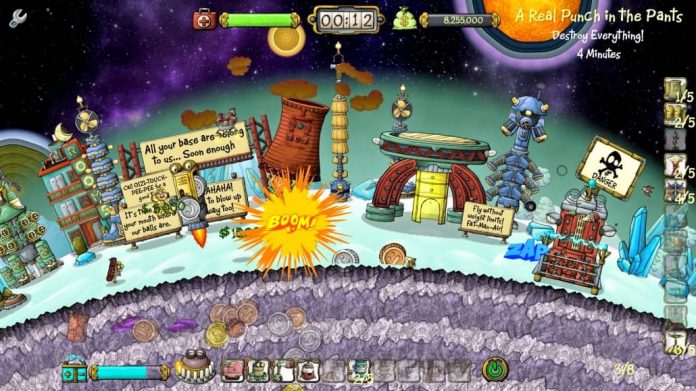 By the 26th Century, robots have become mankind’s supreme overlords, reducing us to a state of stupidity so immense, the death penalty for being slightly smart is to compete on a game show.

If that made you think of The Running Man, then you’re pretty much on track with the idea of the game, although developers oointah have put their own spin on it. Your character – named “U.H. Wutt” – is singled out for being able to read and write, compared to the rest of humanity who have become stupid and addicted to social media. Because of these “special powers”, you are then condemned to death on Death by Game Show, where you must complete a series of levels with increasing difficulty against droid/robot foes. You’re never just left to compete alone though; you have access to a whole range of droids and emplacements that’ll die on your behalf. All these have their own strengths and weaknesses, with colourful characteristics and distinct styling. You can alter the level difficulty to reap more rewards, or spin the wheel to receive bonuses.

The levels do require strategic thinking, but for a fair few of the early ones, you can just spawn one type of droid and come out smiling on the other side. Later on, the levels start to flex their muscles with increasing the variety of spawned foes and your own spawning allies. This opens up the availability to pick up on weaknesses and play them to your advantage. Once you unlock emplacements, then there is some thinking to do with regards to their placement due to damage infliction/arcs and reloading times. If it isn’t clear; this is a tower defence game… now, don’t groan too much! Although this is a highly saturated genre, Death By Game Show does stand out at least. Its core idea –  competing on a gameshow with an almost celebrity status (complete with robot paps snapping away and the occasional heckler) – is worth a mention. The fact you can move about the levels freely is also a nice touch when so many games have you stationary. 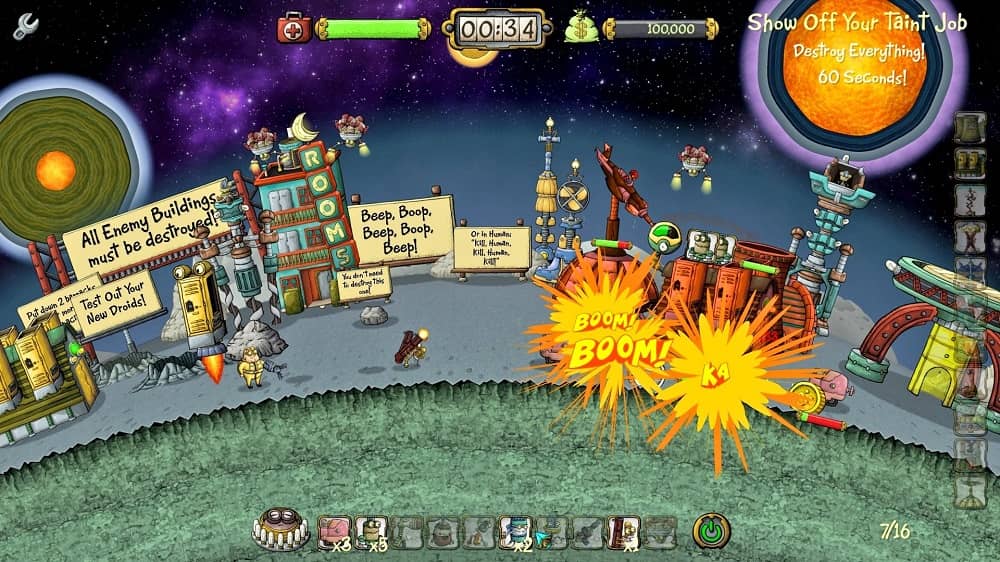 Even before you start playing, Death By Game Show explains the premise and introduces the gameplay elements in an enjoyable way: you learn how to play instead of being told (the best kind!). You’re never stuck thinking “What do I do?” and if you are, well, you can just make your own levels instead! The levels themselves are nicely detailed, and it is a visually appealing game. It never becomes overly busy on screen, so you never miss any of the action. The shading and effects are cartoonish enough to be enjoyable, but not cliché. There’s enough in the background to keep you entertained if you end up having a bit of a battle of attrition, and some of the signs will raise a smile. All droids come out with their own quips, from movie references to previous pop-culture and social media trends. Even when things got completely chaotic on screen, the frame rate never suffered, so the flow of the game was never compromised.  The sound effects can’t be faulted either: aside from the quips and one-liners, the robots have typically goofy sound effects and you’re treated to giant “POW” and “BLAM” exclamations whenever metal meets metal.

But in all honesty, it sounds more interesting than it is; which is disappointing. It may be colourful and well animated, but Death By Game Show’s biggest problem is that it’s just boring. If you’ve ever played a tower defence game, then you’ve played this. There’s nothing new or particularly unique about it, aside from its humour and constant references to movies, TV shows, songs and so on. You’ll recognise plenty of one-liners and direct references even if you aren’t a movie buff. Some of them will make you chuckle or smirk, but most just seem jammed in for the sake of it, and the funny side will wear off quicker than you think. Some of them are overdone and some were funny several moons ago, but have since stagnated and now just receive embarrassed and awkward glances. It just starts to grate, and brings down the overall feel of the game.

I get that it’s trying to emulate a Game Show where you’ll laugh and cringe, but it relies too heavily on what used to be funny in popular culture. Yes, “Get to da choppa” can be funny and is a golden classic; doesn’t mean you have to use it though. These things change for a reason, so the game feels as if it’s trying too hard to be funny. Your character is named “Uh, what” and your support character is called “G.I.M.P.”. Don’t get me wrong; most people can laugh at a stupid name and a classic joke, but it all just feels a bit too forced. There’s no wit to it, it’s not clever or even original when compared to the concept of the game, and you certainly won’t remember the jokes in weeks to come. All quips you’ve probably seen before in lolcat format more times than you can count and can repeat on command. 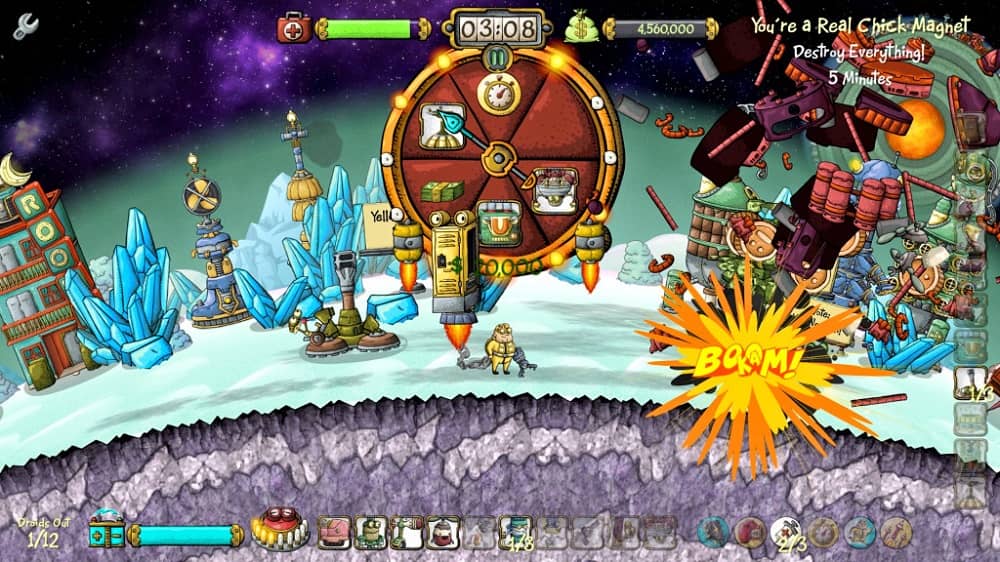 The other main issue with the game is that there’s a lack of originality. Sounds mean, but there isn’t. It’s a tower defence game, yet there’s no real strategy to it. The difficulty fluctuates all over the place and the controls are ridiculously clunky. For example, when trying to build an emplacement, it doesn’t go where your cursor is pointing; it’s to the right of it. Your character animation is smooth but the movement is slow and tedious. If you’ve decided to move back, you face away from the action (no running backwards), and droids won’t spawn in where your cursor is; instead where your character is pointing. So they’ll spawn the wrong way, hit the level walls and die. The freedom of movement is a nice touch when tower defence games seem to insist on remaining static, but once you start throwing down structures it becomes more identical to what it’s trying to stand out from. You can still run around, but you can’t do much whilst all the robots are fighting, so what’s the point? Developers have to make their game stand out, but try too hard and it goes full circle and blends back in. As the saying goes; “quality not quantity” and unfortunately, Death By Game Show has quantity, but it’s badly lacking in quality. Perhaps there’s too many limitations with making a tower defence game, in that they have to follow a certain script to qualify. But you only have to look at names like Plants Vs Zombies to see how creativity can stand out.

Death By Game Show brings very little to the table, and leaves with even less. As with most Game Shows, there will be a new replacement before too long. So I’m sorry guys, but it’s a “No” from me. BZZZT.

Death By Game Show is available on PC.