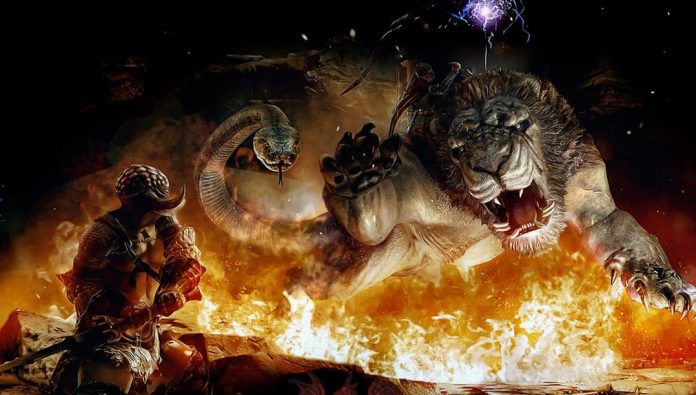 Combine the art style of Dark Souls with the open world of Skyrim and the vertical combat of Shadow of the Colossus.

That would make for an awesome game, right? It does. Mostly. That awesome game is called Dragon’s Dogma and it was easily in my top ten for the last generation. Now, after an ungodly wait, it’s arrived on PC, and while it’s mostly just a quick and dirty port job it’s still handily the best it’s ever been.

For those of you who haven’t played it  (that is to say most of you), Dragon’s Dogma is an open world action role-playing game published by Capcom in a rare act of artistic risk-taking that it immediately put a stop to. It was also too much damn game for the Xbox 360 and PS3. Saying that it suffered from an inconsistent frame rate would be like saying that Half Life 3 is sure taking a while. Its PC release has almost entirely mitigated that problem now as Dragon’s Dogma: Dark Arisen now runs at a near constant 60fps in 1080p on even the most modest hardware. It also lets you shut your pawns’ stupid faces which surely adds at least a point to the final score…

You’re the Arisen, the last hope for the Dutchy of Gransys now that the great dragon has returned. The Arisen is a hero who… er… arises once in a generation to slay the great dragon and restore peace to the land. It’s a standard fantasy setup that leads to a story that wanders somewhere in the space between good, incomprehensible, and shithouse rat levels of crazy weirdness. You almost certainly won’t care about its lore or the plight of its characters because they’re both about as deep as a birdbath, but that doesn’t matter because you can jump off a mountain, on to a griffin’s back, stab it to death with a flaming sword, then ride its burning corpse from the sky. And that’s not a QTE or scripted event, it’s just something you can go do whenever you feel like it.

From your humble beginnings as the newly arisen Arisen who arises you will be asked to pick one of three vocations: that of a fighter, mage, or strider. Later down the line, these choices branch into three advanced vocations and then further into three additional hybrid vocations for a total of nine. 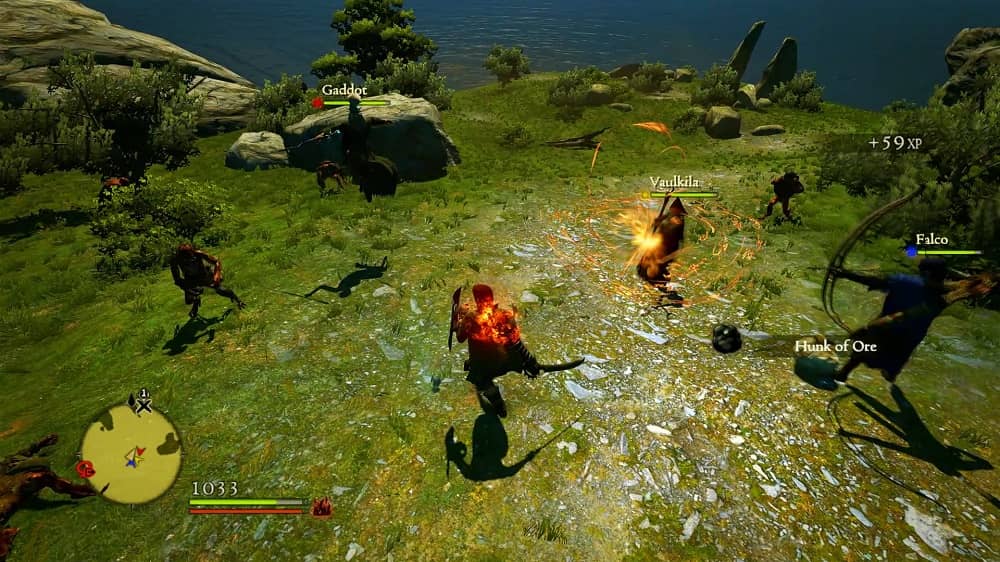 Vocations act almost identically to jobs in Final Fantasy. They level independently of your character’s primary level and each has unique abilities, some of which can be carried over to other vocations. It’s a deep system but doesn’t really begin to show its utility until very late in the game, possibly not even until you reach New Game+.

You will not face the trials of Gransys alone, though. Early in your quest you will be given the ability to command Pawns. These soulless homunculi appear human on the surface but come from an empty realm between realities where they await the next opportunity to act as the Arisen’s private army. You will be given a personal Pawn who is always with you and will level along with your main character, plus the option of two additional pawns created by other players (if you play online) but who cannot be customised and don’t level in your game. This gets you to constantly upgrade your pawns like equipment by spending a special currency you earn when other players choose to travel with your pawn. There are other asynchronous multiplayer elements best left up to players to discover themselves since discovery is probably Dragon’s Dogma‘s strongest draw.

The world of Gransys is certainly not as large as Skyrim nor as dense as From Software’s Souls series, but it feels lived in and filled with sights and mysteries that beg you to step outside your comfort zone and into the salivating maw of a skulking manticore or vicious ogre. In Dragon’s Dogma reward and risk go hand in hand, but if you take advantage of the generous save system that lets you create a checkpoint anywhere you’ll never feel punished for your curiosity, just wiser for it.

Combat is also one of Dragon’s Dogma: Dark Arisen‘s highlights. Depending on your vocation you’re given a layout of strong and light attacks plus three primary and three secondary skills that you can swap out at inns and rest areas. You could spend most of an entire playthrough simply experimenting with different loadouts between yourself and your primary pawn as some skills can chain into tandem attacks that cause massive damage to your enemies. Honestly, I don’t even know how it all works myself as the system is kind of obtuse – but combat is forgiving enough to allow room for experimentation without forcing you into an optimal set of skills in order to survive. 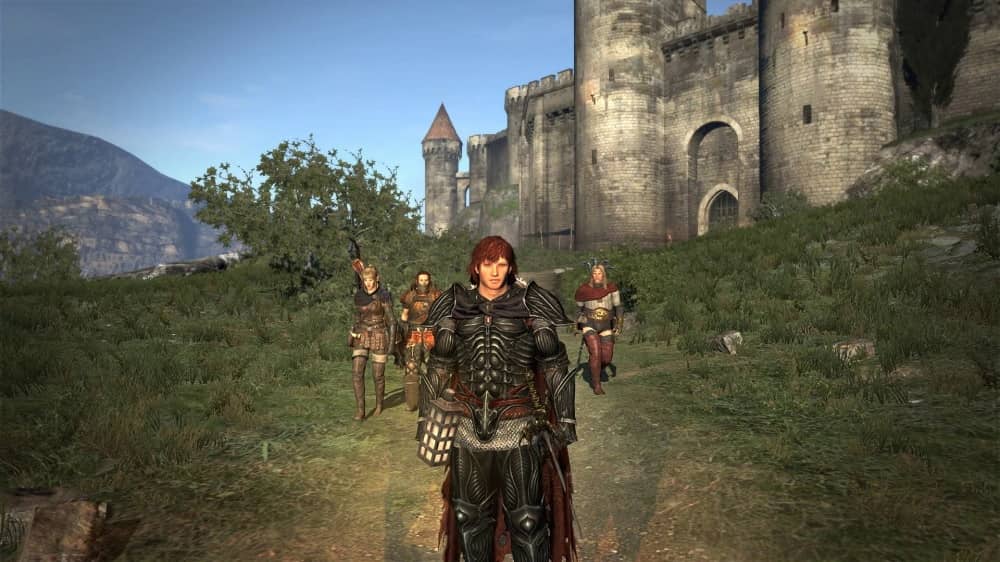 You also have a grab option on the right trigger that can let you do anything from pick up and throw a giant boulder, to put a goblin in a full nelson, to climb up a cyclops’ back to deal the finishing blow. It changes everything and turns Dragon’s Dogma from a competent hack and slasher into a thrilling, swashbuckling action adventure RPG.

All these actions rely on a regenerating stamina pool that is managed through the numerous curatives you can find around Gransys. Scattered about the landscape are many collectible and consumable items, materials and tools that can be combined to make even more useful items or powerful medicines. Unfortunately, this crafting system falls prey to one of Dragon’s Dogma: Dark Arisen‘s biggest flaws: its terrible inventory system.

The sheer number of items and equipment you will be carrying on you at any one time is staggering and the UI does little to help you manage it. Everything you do from consuming curatives to equipping a new weapon or piece of armor requires a two or three level matryoshka nest of menus. Just moving items to your pawns in order to carry more weight yourself requires three or four button presses. The barely restrained complexity is so exhausting that I defy you to spend more than a few minutes experimenting with combining item after item to discover their hidden effects.

This particular port also contains all of the downloadable content that was available in the Dark Arisen edition of the console game. This includes some extra weapon and armor sets, some cosmetic items, an improvement to the fast travel system, and the Bitter Black Isle expansion. All of this is pretty paltry except for Bitter Black Isle which contains a multi-level dungeon with branching paths to explore, new enemies to face, new items to collect, and a new weapon and armor enhancement system. Bitter Black Isle is not for the faint of heart though and would be best left alone until your main character has completed the main game, no matter what Capcom might have to say about a level 25 bar of entry. 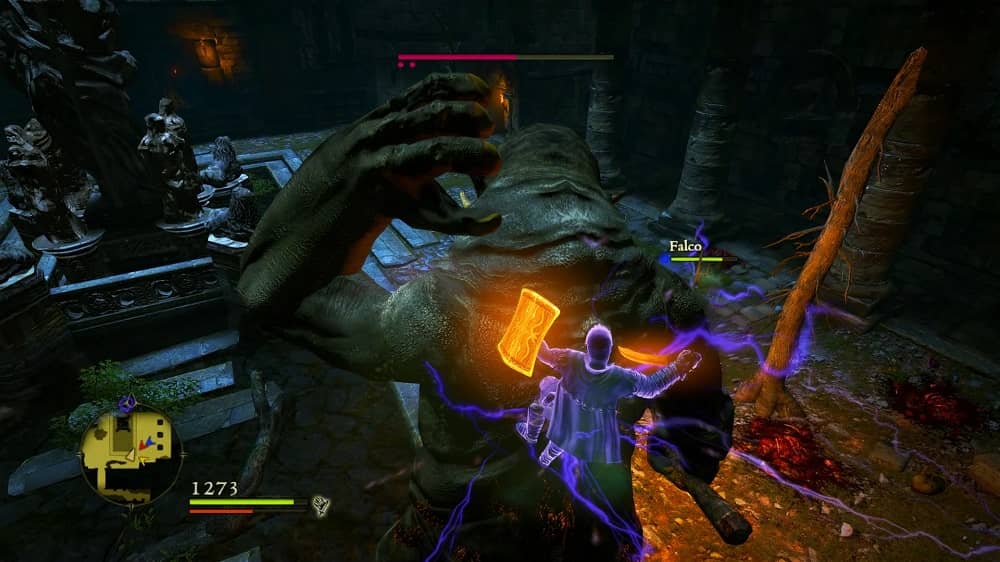 Bottom line, Dragon’s Dogma is a hell of a game that deserved everyone’s attention when it came out, but unfortunately left only a modest impression. Now it has a second chance to shine and maybe, just maybe, convince Capcom that it deserves a sequel with an expanded budget and team to make it into something that can compete with the likes of The Witcher or The Elder Scrolls. If you think you can appreciate a beautiful, rich, rewarding RPG that favors the joys of exploration and combat over the substance of story and polish then Dragon’s Dogma: Dark Arisen on the PC is one for you.

Dragon’s Dogma: Dark Arisen is available on PC, PS3 and Xbox 360. We reviewed the PC version.