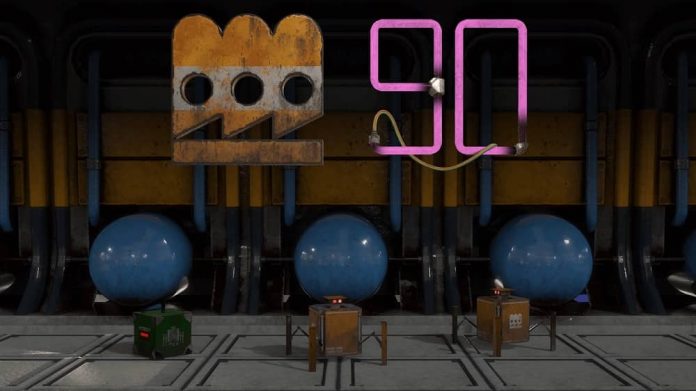 The few people out there who actually own a Wii U might be aware of a well-received strategy puzzle game by the name Factotum. Well, the developers TACS Games have chosen to completely overhaul the game and get it out to a wider audience with the Xbox One release of Factotum 90.

Factotum 90 is essentially a 3D re-imagining of classic strategy puzzlers such as Sokoban and Chip’s Challenge. In a nutshell, you are trying to get to the exit on each level by using and manipulating the environment around you. You do this by controlling metal four-legged droids; these reminded me a bit of the scutters from Red Dwarf for some reason. These stumpy, square robots can move in all directions, pick up objects, deflect lasers and talk to the computer terminals littered around the levels. You will need to master all these skills in order to progress, but since Factotum 90‘s control scheme is incredibly simple, it’s easy to get to grips with the tasks at hand. The game is presented in split screen, which initially makes you think this is a two-player game but in fact this is so you can switch between your droids and still see what the other one is doing. This is very useful when you can’t look over the whole level like you could in the 2D games in this genre of old. Factotum 90 also sports a unique restart feature that comes in very handy. Should you get stuck, you can reset your progress at any time, but unlike most other games, it doesn’t reset the whole level, just the robot you are controlling at the time. This is a fantastic idea as you don’t have to lose all your hard work if only one of your robots has gone wrong.

Unlike most of the retro puzzle games that inspired Factotum 90, the gameplay here is bolstered by a story. You are aboard a large spaceship that has stupidly sailed right into an asteroid field and got badly damaged. The worst of the troubles is that the on-board life support system has gone down and the crew are quickly running out of clean air. The damage to the ship has also caused debris to litter the cargo decks and has also messed up the vessel’s computer terminals, and it’s up to the droids to fix the problems and get the ship up and running again. So basically, use the little bots to get the power back online, save the humans and get the glory… well, as much glory as a rusty metal box can get anyway! 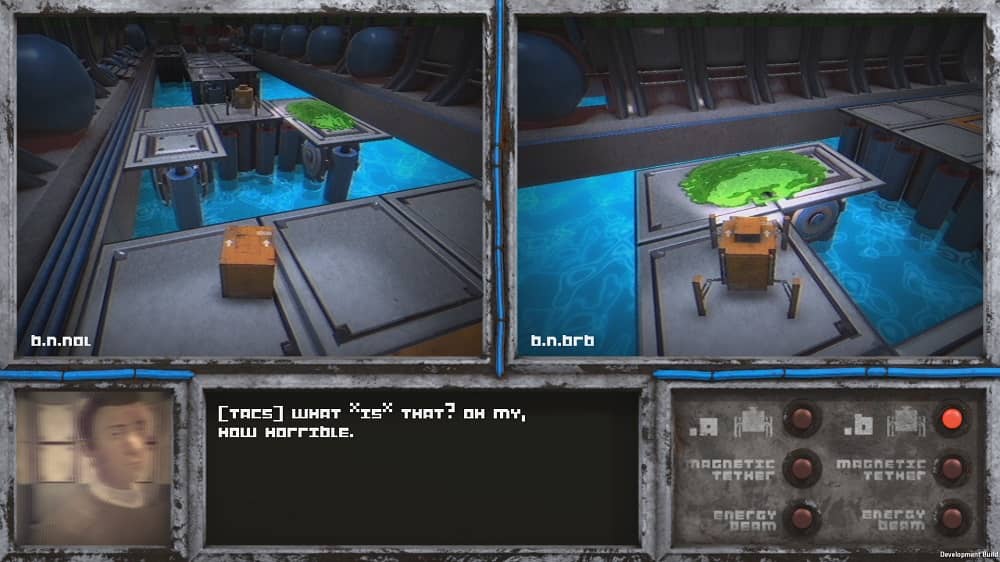 The puzzles naturally start off easy – put a box on a switch to hold a door open, turn of a force field, use a series of lifts etc. However, as the game progresses, you not only have more puzzles to deal with but also multiple droids to get into the exits. Sometimes this almost seems impossible as you generally use one droid to operate switches and such, while the other one escapes. You really do have to try and adjust your thinking to take both sides of the screen into account, constantly switching between the two in order to reach your goal. Some of the puzzles do seem almost impossible; all but those with the most godlike of patience will likely turn it off in frustration and storm off – only to have a eureka moment while sat on the toilet hours later and hastily return to it to prove your theory right! I think I returned to the same puzzle three or four times in one day as I suddenly had an idea out of nowhere. People who love to tax their brain cells will certainly be in their element here.

In terms of visuals, Factotum 90 is pretty smart; the 3D graphics are clean, clear and move around nicely. My only real quibble here is the lack of a proper camera: you are very limited in your ability to look around. I did feel this was a bit of a major flaw, especially considering that looking around the levels is so important to the game. The sound is also decent with some nice music to listen to that can also be found on Soundcloud.

Factotum 90 is certainly not a game that will appeal to everyone, especially if you one of these people who likes to turn off their brain when they play, but for those who like a challenge and want to make the old grey matter work a bit harder, then this might just be the game you are looking for.

Factotum 90 is available on Xbox One.