Although little more than a looping corridor filled with gratuitous jump scares and disturbing noises, P.T.‘s innate levels of terror somehow captured the imaginations of a generation and now lots of developers want to get in on the action. Enter Bloober Team’s Layers of Fear, a psychological trip with a disturbed artist through a very freaky mansion.

Just like we’d said when we previewed this game back in September last year, we were surprised to see such a mature horror title come from a relatively unknown developer as Bloober Team. Their previous titles, Basement Crawl and Brawl, were not exactly resounding successes and as Bomberman clones, are worlds apart from Layers of Fear. But more than anything, it just goes to show that you should never judge a book by its cover and first impressions aren’t always accurate; Layers of Fear is quite an achievement that has certainly made us consider this developer in a whole new light.

On starting the game you’re subjected to a short and suspicious-sounding voiceover, before being thrown into the entrance of a seemingly empty – and instantly eerie – mansion, with the roaring sound of thunder rolling outside. So far, so cliché. As per any “walking simulator” of recent times, you’re given no direction, so naturally your instinct tells you to go poking your nose into everything you possibly can. There’s a wealth of objects around the house to interact with – cupboards to open, drawers to siphon through – but there’s nothing you can actually use, apart from a series of letters and documents that upon finding, will gradually unravel the story of Layers of Fear. It pays to explore as much as you can – if you’re brave enough – as the underlying narrative is worth paying attention to, and if you don’t do much straying from the beaten path you’ll probably be left more confused come the end of the game. The story is bolstered with a theme of art and painting; it’s apparent early on that the protagonist – you – is an artist, or was an artist. The end of each “chapter” in the game is marked by a particular picture being added to; the end product being revealed at the end of the game. 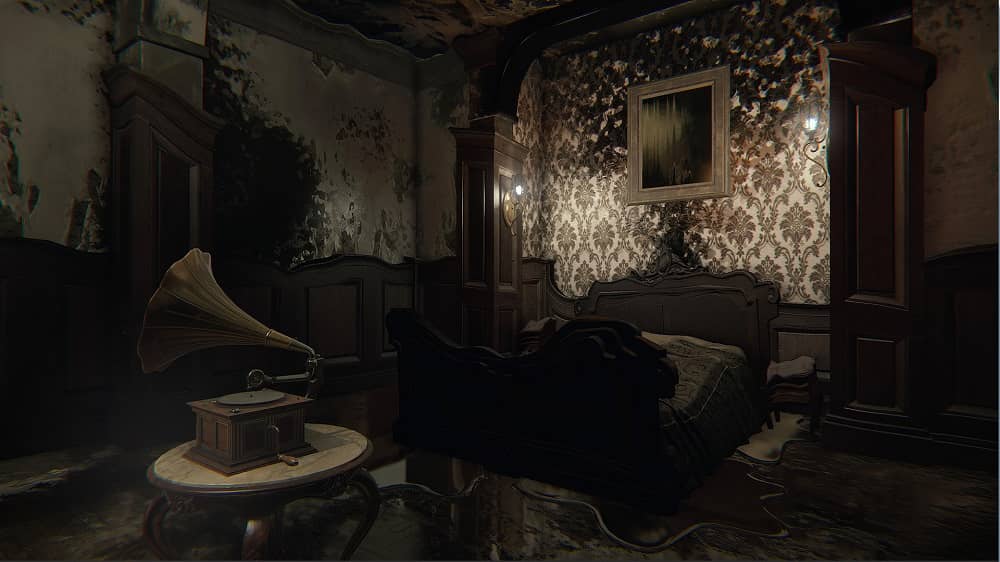 The first thing that struck me about Layers of Fear is just how pretty it looks. Graphically, a lot of care and attention has gone into making this house seem as realistic and believable as possible. Textures and environments are nothing short of gorgeous – but unfortunately it comes at a price. From the minute you load up the game, it’s jittery as hell. The framerate struggles to keep up with your movements as you look around which resulted in me feeling rather nauseous. Hopefully a patch will fix this on consoles, and I’m sure it’s not even an issue for more powerful PCs. As annoying as it initially was though, it wasn’t too distracting from the overall experience and I was still fully absorbed in the incredibly creepy atmosphere that permeates the entire game.

It’s very clear throughout that Layers of Fear is heavily influenced by P.T. And that’s no bad thing either; it wears its inspiration proudly – even down to a scene where you find yourself in a looping corridor, with the sound of a phone ringing in the distance. Déja vu, anyone? Don’t assume that this is some lazy rip off though; far from it. Layers of Fear has taken the seed that P.T. so expertly planted and expanded on it to create a more immersive, deeper, and – dare I even say it – scarier experience. It has its fair share of them, but Layers of Fear is much more than a series of jump scares. The fear comes from the intensely unsettling atmosphere, and the fact that you’re never quite sure what’s going on. From early on, you’re led to question your own sanity – is this real, or is this all in my head? – and as a result, you soon question everything you see. Rooms change in front of your eyes; corridors that once led to a kitchen now lead to new corridors. As you travel further into the belly of the mansion, things become darker and creepier, and you’ll soon have an unshifting feeling of dread in the pit of your stomach every time you come to open a new door.

With no heads-up display, no inventory menus, no weapons and not even a run button, you feel very alone and vulnerable as you wander through the labyrinthine rooms offered up to you. For the most part, an obvious path is laid out, but there are times you can stray to explore extra rooms and uncover more of the story through interacting with objects. Being quite the chicken I am however, I unfortunately missed out on some extra content by being too afraid to turn back around to explore further. I came across an interactive Ouija board at some point, deciding not to mess with it, partly out of fear and partly thinking it would later become part of the story. Unfortunately I never encountered it again so I missed out. It’s safe to say you’ll get the most that Layers of Fear can offer you when you’re brave enough to delve into all of its nooks and crannies. 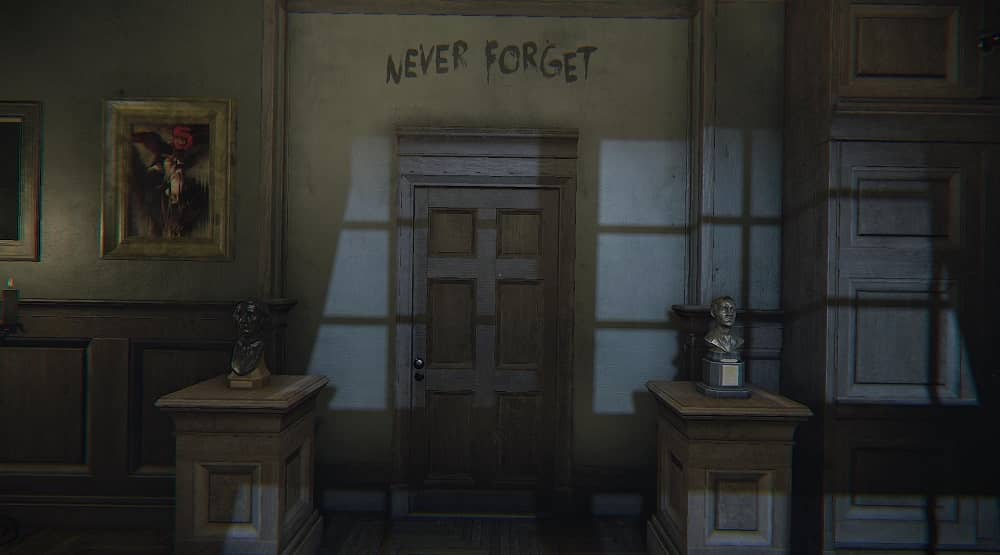 With the majority of Layers of Fear‘s gameplay coming in the form of simply exploring, observing and interacting, Bloober Team have attempted to break out of the typical walking simulator trope by adding in a smattering of puzzles. Unfortunately, these are probably the weakest part of the game; the last puzzle in particular – where you have to find a number of hidden checkers pieces before you can continue – damages the pacing of the game and removes any layer of fear (ahem) from the experience thanks to its monotony. Although far and few between, the puzzles just feel out of place and serve little purpose other than to interrupt the atmospheric tension that the game otherwise expertly creates. Layers of Fear is a rare example of an exploration game at it’s best when you’re doing just that; exploring at your own pace.

It may be a short experience – around three hours if, like me, you’re too much of a scaredy-cat to do too much exploring – but it’s very much worth your time. Very few other games manage to create and sustain such a feeling of horror from the minute you boot the game up, and that’s largely thanks to the way the game constantly keeps you guessing about what is going on. The story, although fragmented through scattered notes and held ransom by your own desire to explore, is well worth the extra effort to uncover as it’s genuinely macabre, making the experience even more unsettling. It’s a shame there’s some duff puzzles in the game, and the technical issues I encountered on PlayStation 4 left a slightly sour taste, but they’re easy enough to look past when the rest of the game is so masterfully delivered.

Oh, and if you’re really brave, you’ll want to play this in the dark with headphones on. But don’t say I didn’t warn you.