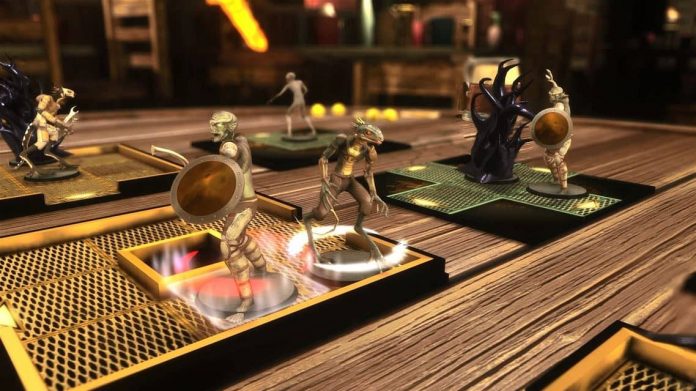 “Time to remove some obstacles in my way…” the sly Sajotir remarks, watching a Devout on their way into the depths of the Living Dungeon.

Perhaps there’s no better phrase to describe the gameplay of this indie dungeon-crawler board-game hybrid. Ger rid of the obstacle. Get around the obstacle. Or move the obstacle. Any way is the right way as long as it works. Living Dungeon brings something truly unique to the video-game genre. Unlike Monstro: Battle Tactics, in which the integration of  board-game mechanics into a videogame didn’t quite produce the end result we were looking for, Living Dungeon is a successful hybrid, bringing back the old-school joy of local multiplayer, something that is increasingly a rarity in our online world.

The mechanics of Living Dungeon are exceptionally well thought out. The rules are easy to grasp within a few turns but there are enough variables to provide complexity. There’s also the mercurial luck of the dice which can really put you in a bad place or save your bacon, depending on how the dice-gods feel. Living Dungeon feels like playing an expertly crafted board-game. Think Dungeon Quest or Betrayal at the House on the Hill. You roll five dice at the start of a turn. There are agility dice, combat dice and mechanical dice (which allow for manipulation of the dungeon itself). Depending on a character’s strengths and their choice of starting dice, you can mix and match dice types for unique play-style. Your initial roll determines your available actions in a turn. Some actions are common to all dice, like moving, whereas others are dice-specific, such as jumping (move two squares and move over gaps) which is agility-dice specific.

Your characters have gems which allow certain number of dice to be re-rolled in a turn. They also have cards which can be played once per game and which can drastically alter the dungeon or stakes. There are too many variables to list here, but you get the idea of a simple yet interesting system. Further to this, the dungeon itself has a turn (it can be played by an A.I. or by a particularly vindictive player). The dungeon has its own set of dice and can spawn wretched (twisted,  goblin-like creatures, the canon-fodder of the darkness) and shadows (horrifying spirits which move through walls and are practically unkillable).  They can also more comprehensively manipulate the dungeon, cutting off progress from players or trapping them with monsters. 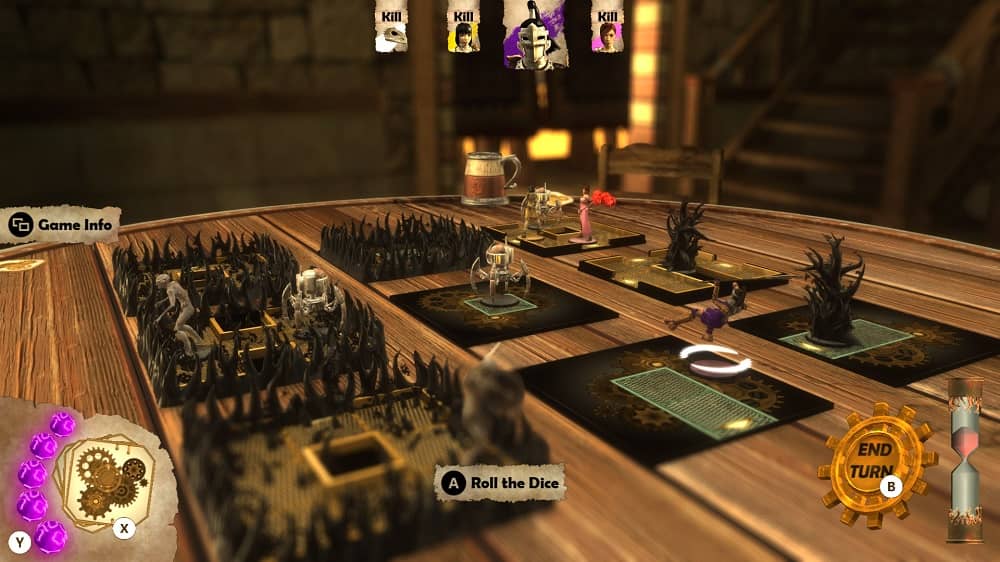 In terms of its aesthetic, there is an air of Hearthstone, but with a little more that is unsettling. Soft harpsichord music plays, building to a shivering crescendo as the two-minute turn-timer depletes. Everything has a mechanical, rusted appearance, aided by expert lightning which casts everything in a sepia, amber hue. For a game which was made in Unity, is turn based, and focused primarily on strategy, Living Dungeon looks amazingly good.  The story mode is a 30-hour epic and is thoroughly engrossing. Short, dubbed,comic-book-style still shots mark narrative transitions between missions. The voice-acting is mostly on point, though there are some dodgy moments, but these can be forgiven in the light of how interesting the cast of characters is. There is someone for everyone to root for; from Sajotir, the mysterious and enigmatic spellcaster who knows more than anyone has a right to about the dungeon and its half-dead god at the bottom, to the gruff and uncompromising Rojef.

The world of Living Dungeon is not strictly speaking original but it is done in such a way that it feels like it might be. The concept is this: a weakened (but not destroyed) god is imprisoned at the bottom of a dungeon/tomb. Slowly, the god comes to control and animate its mechanical surroundings, possessing the dungeon and making it into a deathtrap. A city develops on top of this tomb, drawing all from the far corners of the globe; some seek treasure with the depths below, some seek to control the god, and others view the dungeon as a kind of executioner’s pit, casting the unworthy down into its uncharted halls. The minimalist approach to the cutscenes and storytelling works well in building the world over time, rather than bombarding the player with exposition at the start. Enough mysteries are left that we want to know more and fill in the blanks ourselves, but we also get answers.

By far the best part of this game is the local multiplayer, however. I played against one friend mostly for this review, but in the future I’ll be sure to invite a large group around for a big game. Only one controller is needed, which can be passed around. There are three game types and a ludicrous level of customisation available, from scores to win, round limits, whether advanced rules apply and more. In addition, if the dungeon is an A.I. as opposed to a player, you can adjust its level of aggression and “fairness” (does it attack randomly, distribute the pain equally, or target one person?), meaning that no two games need ever be the same. The tiles are also random, furthering the uniqueness of each play. This game makes me wish my friends lived more locally so I could have them round every week to play a few matches of Living Dungeon with beer or two. 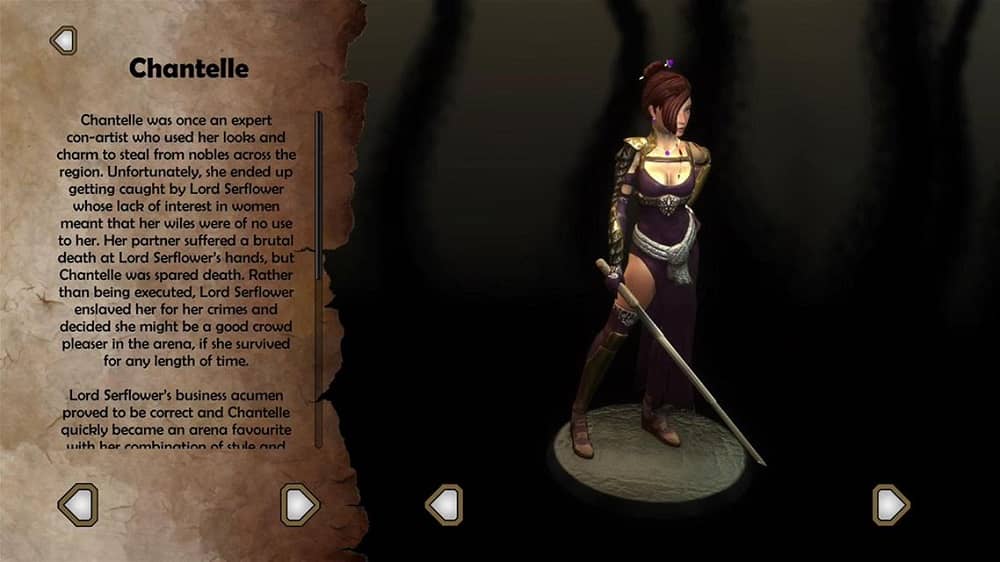 As much as the local multiplayer is to be praised, however, the lack of an online play is a blow. Unfortunately, it has become an expectation of modern gaming. Online play makes it easy for people with the same interest to connect. If I had to wait for my friends to come round every time I wanted to play Battlefront, I would hardly play it at all. Not everyone has friends who are not only local, but also interested in RPG board games, and also able to play regularly (work commitments tend to make weekly meet-ups implausible). I am very fortunate to have friends who share the same love of all things RPG (even if we don’t share the same city, but it’s worth the train fare), however the majority of people probably don’t have this good fortune so I feel this aspect of Living Dungeon might frustrate them. The story mode is engaging, but there is only so much fun to be had there. The real replayability of this game comes from the multiplayer, and that is dependent on these external factors. I think it is a bold and welcome move from Radiation Burn in creating a game where you actually have to be in the same room as a human being; I laud it, but it is also risky. If I didn’t have people who were interested in board games and Dungeons & Dragons, it would be unlikely I’d buy this game, because there wouldn’t be enough of a guarantee I could get the enjoyment out of it.

There is talk online play might be added (certainly for the PC version of the game, but we don’t know about the Xbox One edition). As it stands, this is an unfortunate absence from what is otherwise an amazing and fun game that delivers on its promise of being unique.

So, call your friends over, crack open your favourite beverage, and have a few rounds at multiplayer. Trust me it’ll take you back to the good old days of nights in with the PS2 and original Xbox, or of your favourite table-top RPG. For those who love to spend hours puzzling over difficult problems, pick this game up and immerse yourself in 30 hours plus of storymode.

For those of you who want to play online, I’d wait and bide your time. I can’t say fairer than that.

Living Dungeon is available on PC and Xbox One. We reviewed the Xbox One version.