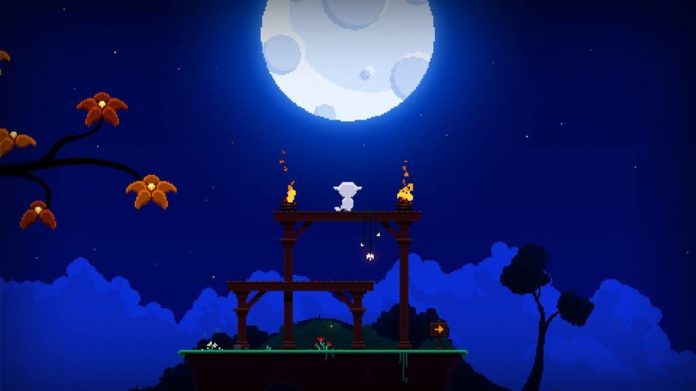 I decided to pick up Moonlight on Steam after a friend recommended it to me, and although it isn’t one of my favorites, I’m still glad that she did. The game makes a very good first impression due to its charming 2D graphics and adorable protagonist Kinubo, but it did fall flat in more than a few places.

Moonlight is a 2D platformer/puzzle game set in a whimsical-looking world filled with talking monkeys and trees to climb. You play as Kinubo, a white lumpo monkey, whose dream is to someday travel to the moon. Befriending your fellow monkeys and doing favours for them is the key to moving forward in the game. Your character believes that by doing these favours, one way or another, someone will be able to help him reach his goal. The trick is that in this silly world the monkeys are not very trusting, and will only speak to you if you are wearing the right hat.

It was definitely love at first sight with me and Moonlight. The graphics are incredibly lovely; featuring sparking blue waterfalls, large trees that you can jump on and off of, and of course, the monkeys whose character designs are simple and cute. The beginning of the game has your character learning how to do things in this new world with a featured tutorial, which once completed, leaves you free to do as you please. It isn’t long after the tutorial that you come across other monkeys standing around in different places on the map but none of them seem interested in talking to a stranger. After wandering around a bit you are able to find one monkey who is willing to speak with you and she teaches you that if you want to be able to chat with other monkeys, you’re going to have to dress to impress.

Your first hat of the game is probably the most simple to acquire as it only involves making your way through a jumping puzzle; you must bounce across bubbles that float in the air. Did I say simple? What I meant was excruciatingly difficult. Whether this is due to my extreme lack of platforming skills or the game being made difficult on purpose is hard to say, but right from this first jumping section I was faced with a challenge that took me quite a long time to beat. The jumping mechanic can be quite unforgiving, especially when jumping across the bubbles, where if you do not land perfectly in the centre, you’ll go bouncing off in the opposite direction of where you intended. 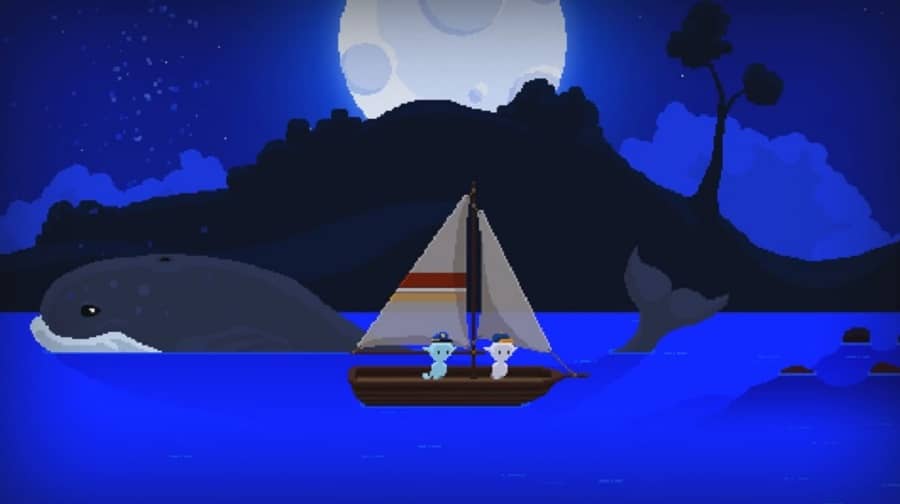 After you eventually get this first hat, you have to continue to find the next monkey that will talk to you, and then the next, and so on. For example, if you’re wearing the fancy top hat, given to you by a very posh monkey, a young boy monkey will give you his own baseball cap in exchange for the top hat. The entire game is driven by this strange monkey black market hat trading/favour system which allows Kinubo to get closer to finding someone who may be able to help him get to the moon.

Despite my initial fawning over Moonlight and its pleasant visuals, it unfortunately soon became apparent that these jumping puzzles were almost all that the game had to offer. The game does feature other favours for your character to complete but none of them are anywhere near as challenging. A game of hide-and-seek proves effortless, and a certain puzzle soon becomes disappointing when you are literally given the solution. Other than the difficult and repetitive jumping puzzles, and other simple favours, Moonlight is also a little unsatisfying in terms of the size of its map. The game really only consisted of two areas; the first being where the majority of the game was set, and I was able to memorise the locations of everything within the first hour of playing. The other area was even smaller than the first and featured very little variation. In terms of level design, both areas looked markedly similar; the only difference being that the second area was darker, as it was meant to look as though it was underground.

This second area did redeem itself though when the jumping puzzles changed to involve gravity-altering mechanics in a way that reminded me of Portal or Limbo. Kinubo, clad in a purple wizard’s hat, has to touch crystals, placed throughout the map, in order to change the gravity of the room. This allows the player to reach taller platforms and, using momentum, get to the end of the level. This portion of the game gave me a very satisfying “I’m a genius” feeling, like what you get when you complete a testing chamber in Portal or when you save yourself from having to watch your character’s graphic death happen over and over again when you finally solve a puzzle in Limbo. In spite of this brief moment of redemption, the game then returns to its previous normalcy.

Additionally, the ending left something to be desired. Without revealing anything about the story, the ending broke the fourth wall in a way that had me asking myself why the game was given a creative story at all. It even slightly defeats the purpose of having an immersive, completely made-up world in the first place. A more finite ending to tie off the experience would have been better. 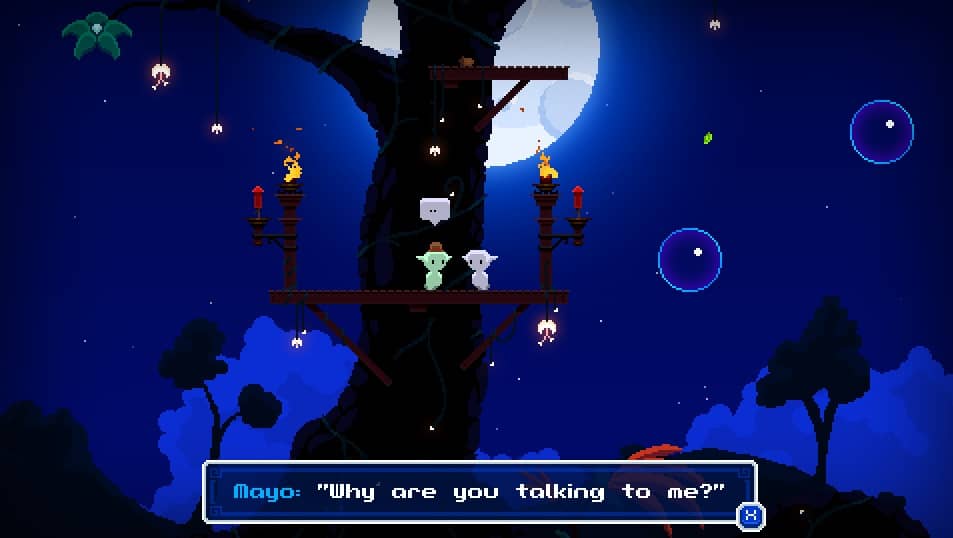 Despite its flaws, Moonlight is still an entertaining and delightful platformer. Its pleasing graphics and wonderful, calming soundtrack won me over right away but its brief playing time, frustrating jumping mechanics and underwhelming ending let the overall experience down in my opinion. At around four hours playing time, Moonlight offers a silly, quick platformer game, but those looking for anything with more depth or longevity are best looking elsewhere.

Well, unless you’re only looking for hat-wearing monkeys. In that case, Moonlight is perfect.

Moonlight is available on PC.