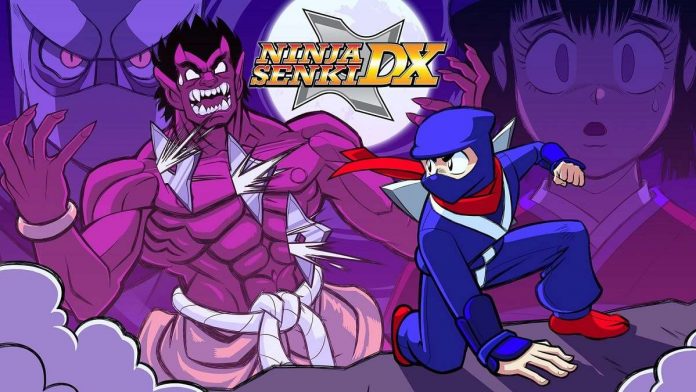 In an age where virtual reality can whisk you away to the Jurassic and where curved televisions needlessly exist, Ninja Senki DX still prays that the milkman arrives on time so it can have breakfast before the Pick ‘n Mix rush at Woolworths.

Developed by Tribute Games and originally released as a free title back in 2010, Ninja Senki celebrated its fifth anniversary by indulging in a few upgrades. At its core, it was a platformer inspired by the SNES classics, and nothing’s really changed apart from a few tack-ons. The music’s been remixed by Patrice Bourgealt and there’s a few new game modes. Challenge Mode introduces speed-running challenges amongst other particularly difficult obstacles to overcome, whilst there’s two secret modes that you’ll have to unlock by jumping and throwing shurikens a lot. You can also obtain awards for impressive feats during levels or “scenes”. This might involve killing all enemies within a level or collecting all the coins, as you can tell, it’s not something to give too much thought.

To kick things off, Princess Kinuhime is slain by an otherworldly demon and Hayate (you) decide to cast away your art of invisibility to unleash your power of shurikenjutsu – the art of throwing shurikens like nobody’s business – and take vengeance on those pesky demons and evil ninjas. There’s sixteen levels which you’ll have to jump and fight your way through in order to fulfil your desire for revenge. You traverse through the levels with the use of the W and D keys to move left and right (though the game does have controller support too). The J and K keys shoot and jump respectively. Hayate can jump higher if you smash the key harder, and he can also do a little double jump – though it’s more like a lacklustre hop – to get to some vital areas. It all felt as fluid as it could for a simple 2D platformer, although I did find playing on the keyboard made life a lot easier. This was thanks to the game responding to the sensitivity of my keystrokes in contrast to my pressing of a button. Hayate is very precise when he jumps, meaning that you have to control yourself when you just miss a jump or just fly head-first into some spikes because you didn’t quite press hard enough. 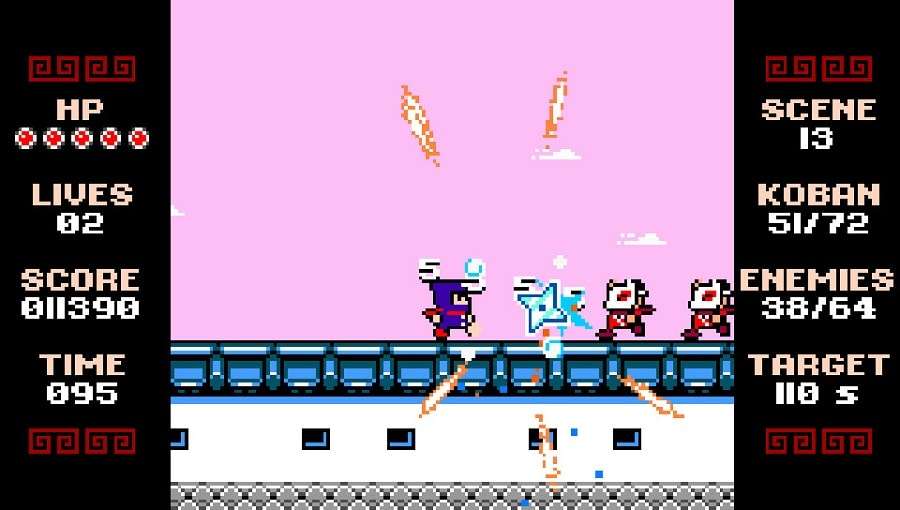 The graphics are colourful and beautifully “Bitty”, and the level design is also what you’d expect from a good platformer. You’ll find enemies placed in the most irritating of spots, or colliding with you as you’ve meticulously timed your jump. Moving platforms slide from side to side at a pace that’s just a little too fast, spikes are present when you really don’t need them to be and there are some pretty hair-raising moments when you just about make a jump onto a minute ledge before it falls from underneath you. It’s honestly pretty brutal. Ninja Senki DX isn’t a casual affair in the slightest; it requires a great deal of patience as the levels are designed fantastically. You’re never really comfortable as you tentatively progress, and even checkpoints are hard to come by; lives aren’t even dished out generously… you only get three chances to start off with. I found myself getting frustrated as I handicapped myself over and over when I lost just a tiny smidgen of concentration. What’s more, Hayate does this really annoying stumble backwards when he gets hit, meaning that he just falls backwards or drops to his death instantly if caught in a bad spot.

Shurikens are Hayate’s go-to weapon: you just smash the button and he flings these things gratuitously. You can throw them so quickly that enemies just evaporate in no time in earlier stages. Early on in my fledgling Ninja Senki DX career, the challenge involved mastering the basics: landing jumps and not getting this shit wrong. As I managed to barge my way into later levels, the challenge wasn’t just landing jumps on platforms. These platforms now moved or they had a bed of spikes underneath them – cheeky bastards. Occasionally the floor might collapse on you, leading you to your impeding demise. Sometimes you might have to cling onto a falling platform and jump at the last minute before hastily flinging a shuriken at a leaping frog that’s out to make you stumble annoyingly to your death. Generally I found that difficulty correlated with new things to worry about suddenly making an unwelcome appearance. Early on, all you had to get anxious about was batting away a few simple enemies and landing on static platforms. However it became trickier when enemies fired homing missiles or became invulnerable as they locked you in their iron sights. It’s a difficulty that ramps up thanks to good level and enemy design. 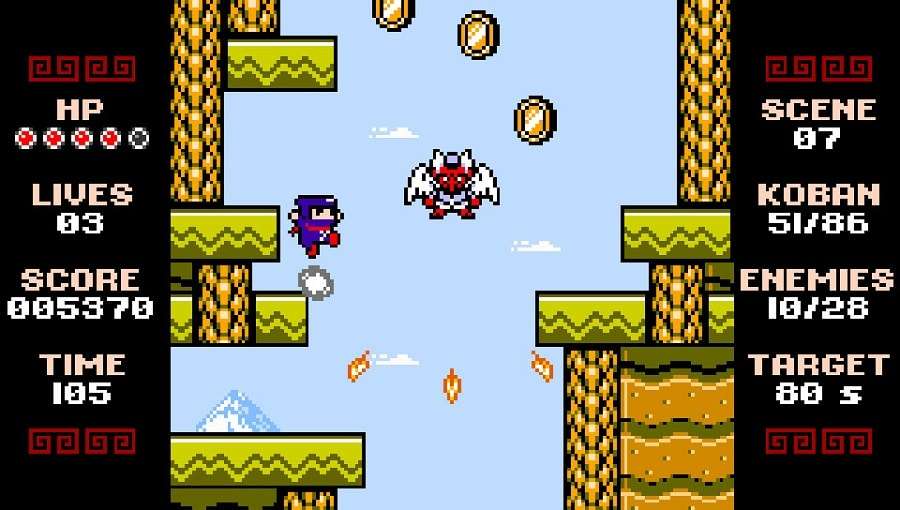 Thanks to that difficulty spike, there were plenty of occasions where I desperately wished for more lives. You can attain more lives and refresh your HP bar through collecting a certain number of coins or points, but it wasn’t exactly a generous mechanic. This sounds rather naggy and very needy, but when you’ve made it so far through a teeth-grinding level just to face a boss for the first time and then proceed to get slaughtered, it’s no fun at all when you’ve got to repeat the whole level over again. I don’t know exactly what drove me insane about it; I usually adore games that offer a Ninja Senki DX form of brutality, but the notion that I had such a limited chance at a tricky scenario really began to grind my gears. It actually felt a little like Ninja Senki was trying too hard to take on the persona of old SNES platformers, forcing the game into a tricky experience because it had to keep up its old-school appearance. Throughout my time playing the game I was hyper aware that it was a tribute, almost to the point where I didn’t think of it as a standalone title. It succeeds in replicating what’s already been done, which is fine, but it fails to be a classic in its own right. You could say that it’s inspired, but not inspired.

Ninja Senki DX is a neat tribute to the classic days of old. It’s a simple game that’s difficult to master, seeking out the slightest slip in concentration to punish you heavily. If you’re not careful it can morph into an agonising experience that’s fuelled by impatience. As long as you can control your emotional state, you’ll be alright and ultimately enjoy a rewarding experience. If you’ve just come back from a hard day at the office and hope for a nice relaxing platformer, this may not be the game to ease you into an evening of splendour. It’s not ground-breaking or exceptionally memorable, but it’s ultimately a fun game that’ll sate some nostalgic desire and does its job admirably.

Ninja Senki DX is available on PC, PS4 and PS Vita. We reviewed the PC version.