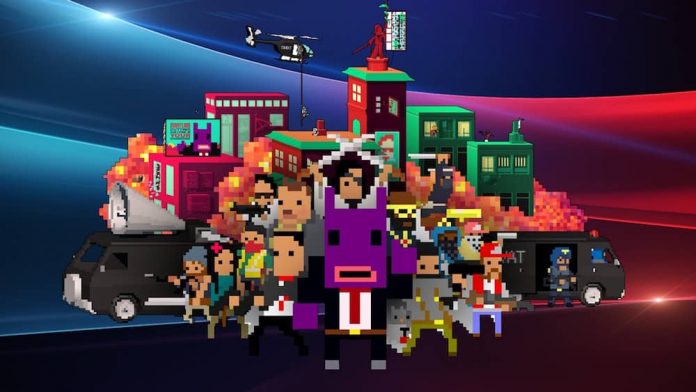 Some consider all politicians to be crooks.

Many probably are in some way or another, whether it be by fiddling their expenses or leveraging their power to profit financially from the economy or big businesses. So what if you could help a new kind of politician get in power; one who comes down on thugs and mobsters like a tonne of bricks; who uses a ragtag bunch of hitmen (and women!) to run his campaign for popularity – a campaign that mainly involves shooting people in the face? Would you support him, this morally dubious man that is getting things done and making the streets safer for all of us, yet is surely Not A Hero?

In the case of Roll7’s Not A Hero, the politician in question is BunnyLord, an anthropomorphic rabbit from the future. Declaring that the world is on the brink of mass destruction unless he is made to be mayor in 21 days’ time, it’s up to you playing as his band of dangerous miscreants to do his bidding and increase his approval rating to get him into power. In gameplay terms, that means you’ve got 21 levels to complete, in which you’ll murder, destroy, deface and steal all in the name of your rabbit faced master.

Before each mission, you’re given a bit of a comical briefing by BunnyLord, with his unfathomably squeaky voice being conveniently subtitled for your reading pleasure. Whether you pay attention to them or not is up to you; Not A Hero’s story and quirky dialogue is hardly engrossing, but it is at least amusing. The fact of the matter is though, that the briefings aren’t entirely necessary; the missions pretty much just all boil down to killing everyone you meet whilst maybe completing some rudimentary objectives along the way. That is to say the linear structure of all but a few levels makes completing the main objectives rather trivial as you engage in your merciless campaign of murder. 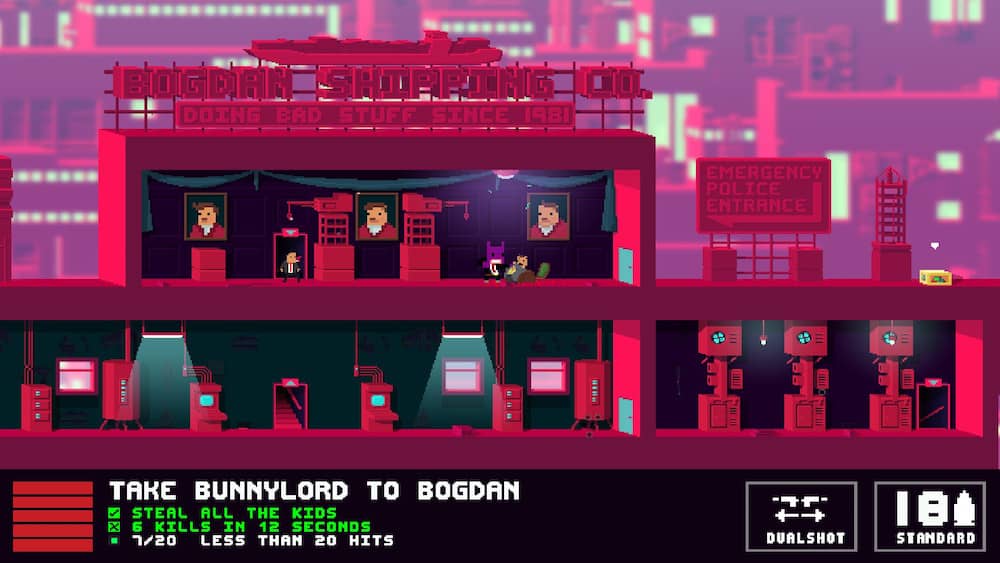 Not A Hero‘s gameplay itself is rather unique; a compelling hybrid of a 2D platformer and a cover shooter. With its comically charming pixelated graphics, it initially seems like a strange combination of gameplay styles, and indeed it is, but it’s one that actually works rather well. As you make your way through each of the levels’ buildings, you shoot hordes of bad guys, ever mindful of your need to reload; an act that leaves you wide open for attack if poorly timed. To avoid such instances then, you have to make use of the game’s cover mechanic, which is essential to your long-term survival. Tied with the button that enables your character to slide, knocking over most enemies if they’re in your slippery path which allows you to stylishly execute them, getting into cover can sometimes be an awkward affair. When you get used to effectively getting into and moving between cover however, it feels immensely rewarding, with you dispatching your foes with grace and ease. That is until you come face to face with the many samurai sword wielding foes towards the end of the game, who take great pleasure in effortlessly one-hit killing you with an alarming turn of speed.

In order to make your task a little easier and more varied, dotted throughout the levels are an assortment of handy pick-ups that offer you some alternative (and usually explosive) methods of killing the waves of thugs that stand before you, such as turrets, grenades and even an inventive cat bomb. You may also find that some goons will occasionally drop special ammo for your character’s signature weapon upon their death, enabling you to temporarily become a bad-ass killing machine. If that’s not enough diversity for you, then you’re also afforded some combat variety by the game allowing you to choose which character you want to use before every mission, each with their own unique strengths and weaknesses.

Initially only one character is available: Steve, a Danny Dyer-esque cockney with a foul mouth and impeccable aim. As you complete missions and improve BunnyLord’s approval rating however, more playable killers join the fray until you have the choice of nine. Simply completing the main objective of a mission will see you unlocking the roster of characters slowly, with the BunnyLord’s approval rating rising by a nominal amount, but thankfully each mission also has three additional objectives that can be completed to accelerate his approval gain. Unfortunately though, no matter how amusing it is to play as the hip-thrusting Jesus or the Glaswegian redneck Cletus, none of the additional characters ever feel more capable at getting the job done than Steve; his pin-point accuracy being far more valuable than any other of the characters perks on offer. 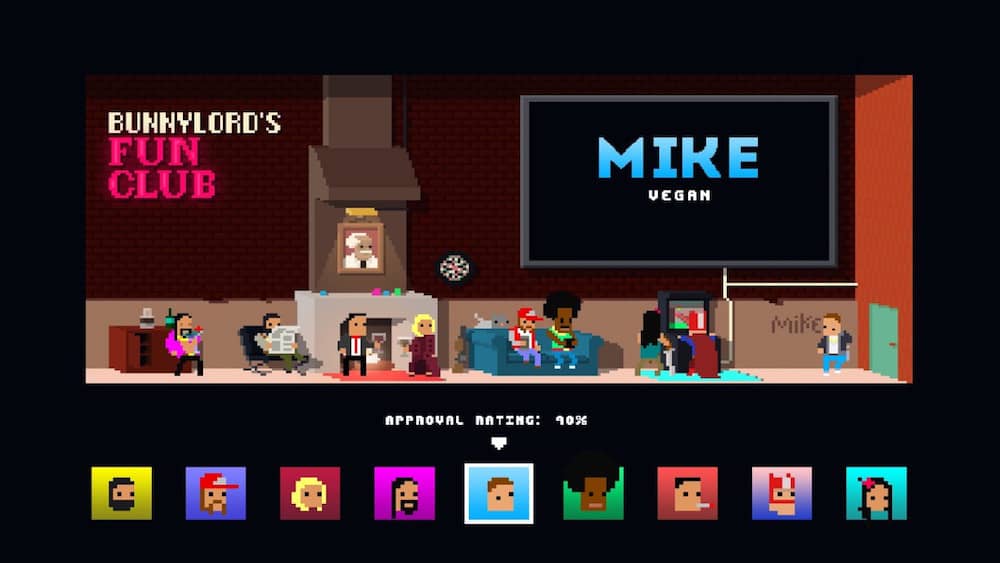 For the most part, Not A Hero is a unique and engaging affair with a fantastic chiptune soundtrack and difficult but addictive gameplay. Sometimes though, it can just feel too brutal for its own good. Levels have no checkpoints whatsoever, and when enemies often swarm in around you or suddenly drop in from the ceiling before putting an end your merciless killing spree  you can justifiably feel cheated out of your hard-earned progress. The last level is particularly bothersome, expecting you to overcome insurmountable odds before throwing everything but the kitchen sink at you, infuriatingly sending you back to the beginning of the level when you meet a swift and unpredictable demise. In fact, I’d wager that the last level will frustrate many players so much that they will probably never finish the game – a shame considering how much fun it is to get there.

An enjoyable but flawed game then, Not A Hero is commendable for what it achieves, but disappoints with its preventable shortcomings. Offering an absorbing and skilful challenge, fans of titles such as Hotline Miami will find Not A Hero‘s gameplay similarly cathartic, but those without patience will soon become bored of its repetitive nature. Crude, humorous, and action-packed, there’s a lot to like about Not A Hero, but the sometimes awkward cover mechanic and unpleasant difficulty spikes mean that it’s definitely not for everybody.

Not A Hero is available on PS4 and PC. We reviewed the PS4 version.