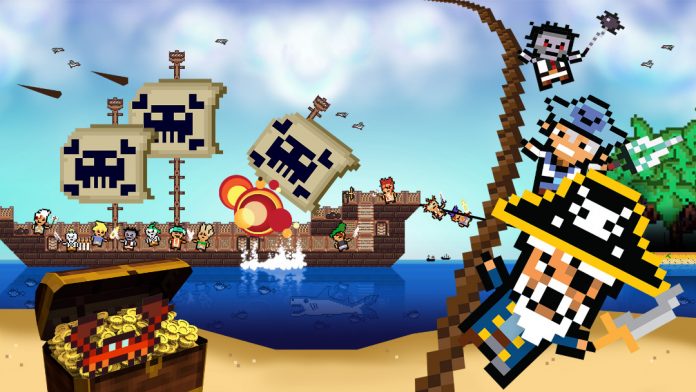 Given what a huge hit Terraria was, everyone has been waiting to see just what Re-Logic would bring us next. Well now the wait is over as they have teamed up with 505 Games once again to bring us their latest retro-inspired offering, this time with a helping of pirates thrown in for good measure: Pixel Piracy.

At first glance you can see Pixel Piracy‘s immediate relation to ReLogic’s previous hit; the exact same style of pixelated 16-bit graphics has been used with small sprites, vibrant colours and cutesy characters. Once you begin to delve into the game, however, you quickly learn that this is a very different affair, when it would have been much easier – and possibly more profitable – to have re-jigged a winning formula. Rather than letting you jump straight into the game, Pixel Piracy requires you to spend some time just setting the game up. The first thing you are faced with is designing a character and giving him a name; I am sure many people will spend ages on this element alone! The next part sees you choosing the way your game is going to play by directing the story. Three different options of story are presented to you in succession with a choice required each time. These choices affect things like the difficulty level, the enemy AI and whether you want to choose a more passive style over a wild and aggressive one. While this is an interesting way of presenting the game I can see a few people getting annoyed and just wanting to dive right in.

Another thing you are tasked with doing is choosing a crew. What good is a pirate if he doesn’t have any scurvy dogs to order around? This takes place in a drunken tavern where you can select your comrades and look at their skills. As the game progresses, you can use the money you pillage and plunder to hire more crew as well as improve your ship and buy supplies. This is where Pixel Piracy starts to get interesting because you can both control your own character as well as order around the crew. The left stick and front buttons are used for yourself and the right stick and shoulder buttons operate a little crosshair and menu system that controls the crew. You can move people around, put them into groups, tell them to attack or just have them follow your lead. It takes a while to get the hang of this and the controls can be very awkward in battle situations but it’s an interesting system that gives you much greater control over the way the game pans out. It might not initially seem like it but in many ways Pixel Piracy is nothing more than a good old fashioned real time strategy game. 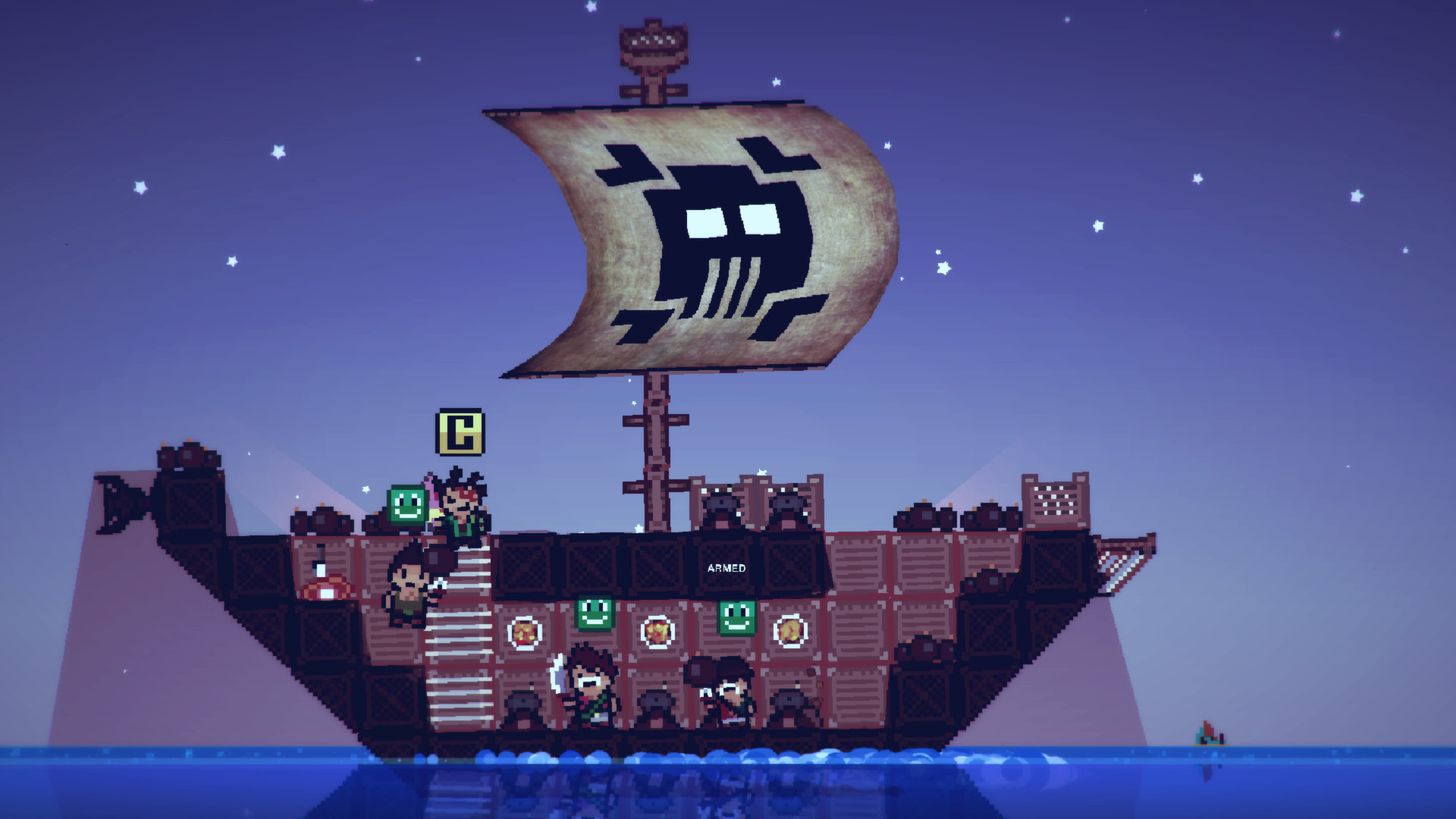 You can move your ship around a map, where you can head into encounters with other ships to see who rules the waves or sail to a nearby island to stock up on supplies and make friends with the natives; well I say make “friends” – most of them are far from friendly! The fighting elements of Pixel Piracy are pretty simple; just bash the button fast enough and try to dodge their attacks and win. It’s certainly not Street Fighter V! If you defeat another crew you also get the option to steal their boat, which is a nice way to upgrade. The various islands also feature wild animals, traps and treasure that can be discovered, so there is a lot to look out for. Of course both you and your crew can get killed in a number of ways and once your own character dies, it’s game over. Thankfully, you can return to the last save point to try it all over again so all your good work isn’t lost. A key feature of not dying is making use of your inventory, remembering to take food when you need it as well as keeping morale up by feeding and paying your crew.

There are lots of nice features in Pixel Piracy from the colourful graphics to the neat original features and lashings of humour, but there are also quite a few things that let the game down. Pixel Piracy is difficult to get into: there is a lot to be learned and lots to remember; namely getting to grips with the vast inventory system and mastering how to keep the crew in check. Now normally this wouldn’t really be a problem but Pixel Piracy is clearly a game aimed at children, who became the key audience for Terraria before it. The problem is that many children have short attention spans and won’t want to spend time learning all the intricacies of this title, which is a real shame in many ways as there is essentially a good game hidden in here; there’s just lots of minor annoyances that seem to get in the way of it.

Pixel Piracy is available on PC and Xbox One. We reviewed the Xbox One version.