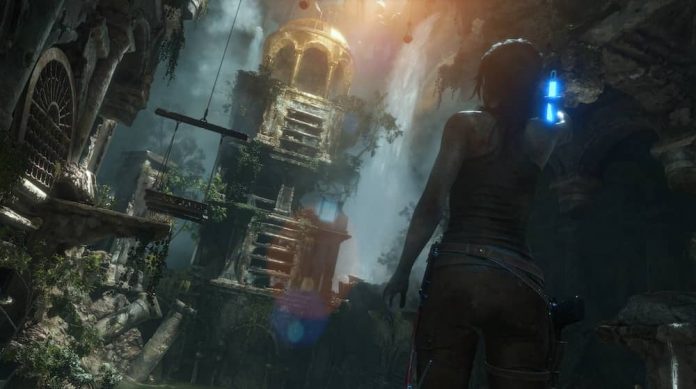 Over the past few days I’ve climbed nearly to the jagged peaks of snow-capped mountains, swung over perilously deep, geothermally heated chasms, scavenged deadly, ancient ruins for much-needed supplies and have personally butchered hundreds of para-military troopers from the present and the forgotten past. No, I’ve not joined a Scout Troop, I’ve been playing Rise of the Tomb Raider.

Following from Lara’s harrowing reboot in 2013, Rise of the Tomb Raider is much less about taking control of an ideological young woman – doing whatever it takes to survive in a vicious world that she can’t understand – and more about guiding the fledgling Tomb Raider through her first real quest: one that she has inherited from her late father and one that she has chosen (albeit under some duress) to go on.

Rise of the Tomb Raider has a plot that Indiana Jones would murder a million Nazis to get his hands on and, while Crystal Dynamics don’t really do anything you’ve not seen before, the game does an exceptional job of telling the story and drawing you into their world. Cutscenes are sprinkled liberally throughout to flesh out the main story details but the real story is experienced as you play the game; listening to conversations between AI, picking up documents and audio-logs and even getting to hear Lara’s inner thoughts when you rest by a campfire. Crucially, you never feel as though the story has been pushed aside by the gameplay, any more than you feel that the gameplay is getting in the way of the story. It all works brilliantly together.

This time, Lara is looking for a semi sci-fi, high fantasy-ish MacGuffin called the Divine Source: a piece of God’s soul that is purported to gift whomsoever looks upon it eternal life. Lara’s journey takes her through some of the most breathtaking environments I’ve ever seen in a video game (and some of the most varied); including a sprawling Soviet base, a war-torn jungle village and a crumbling ice-bound city, not to mention miles and miles of mountain passes, rocky chasms, underground rivers and, of course, TOMBS.

Easily the most satisfying and engaging part of Rise of the Tomb Raider are the Challenge Tombs. These optional areas are almost completely devoid of any combat and are all about cracking the devious puzzles that those wily ancients have left behind. Every tomb presents new challenges and are liberally sprinkled with collectibles and loot for you to find as you progress through them, as well as a hefty bonus for completing each tomb. The only downside is that there just aren’t enough of them and, while the game does intersperse puzzles throughout the main story, it often feels as though you’re playing a more combat oriented game than Tomb Raider really should. 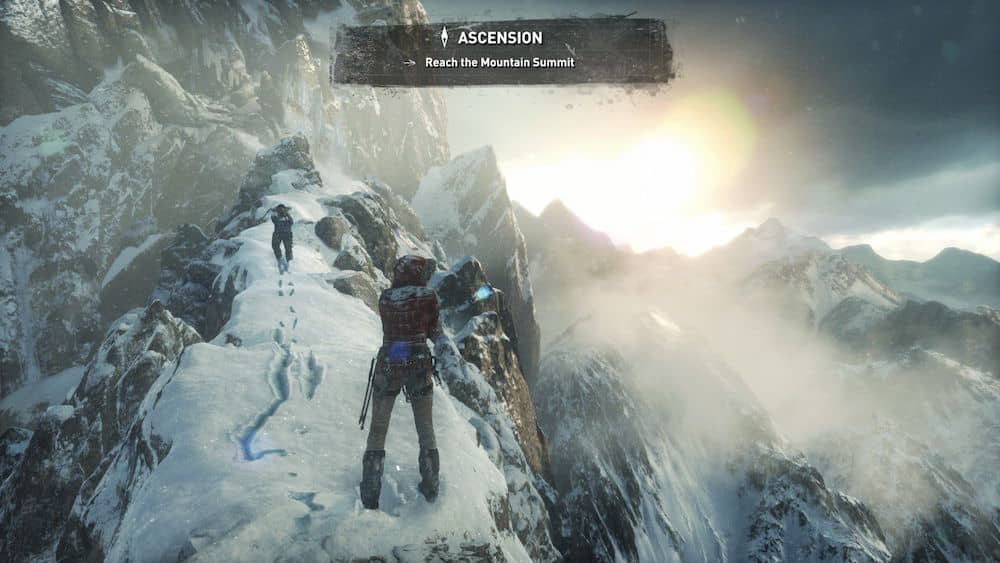 Despite many assertions that players can choose the stealthy path in Rise of the Tomb Raider, I found that it was much faster and more rewarding to get my gun on whenever enemies were around – and they’re around a lot. There are also a large number of sections where combat is utterly unavoidable and, therefore, the necessity for the player to try and assume the style of a silent, pony-tailed lady-assassin during normal play is moot and can feel a bit out of character. Not only that but you’re going to miss out on a lot of fun if you’re trying to play this like Ezio Auditore da Firenze, as the best combat mechanic in the game comes in the form of being able to craft improvised weapons and ammo on the fly.

Lara will need to find a campfire to sit and craft larger items and weapon upgrades but, in Rise of the Tomb Raider, she’s able to create arrows and bullets on the move as well as more specialised ammunition and some clever little items that will give you the edge in battle – like a molotov cocktail or an exploding can full of shrapnel. Most items can be picked up in just about every area you’ll be in but you’ll find bottles, cans, urns and radios in any zone where combat takes place (usually perched on or sitting nearby those incredibly useful chest-high walls). Simply pick one of these up and hit the craft button and Lara will convert it into a lobbable object of fun and despair that you can launch at your enemies.

The crafting mechanics in Rise of the Tomb Raider are right at home with the two open-world hub areas that you’ll encounter as you play. You’ll spend a lot of time traversing the Soviet base and geothermal valley; not only during the main story but in gathering precious crafting materials, taking part in side-missions from your allies and searching out those elusive Challenge Tombs. There are plenty of collectibles to find too, as well as stashes of Byzantine coins that can be handed in to a disgruntled soldier who’s decided that fighting isn’t for him so it’s time to turn merchant with all the gear he’s nicked. Unlike in some games, spending time to complete side missions and finding all of the little nooks and crannies that relics, documents and murals are secreted away in is incredibly rewarding as the majority of collectibles help to flesh out the story and just about every action in the game awards XP.

Skill points don’t come too frequently, though, and the likelihood is that you’re not going to have accumulated enough to purchase every skill available to you by the end of the game, forcing you to make hard decisions about what you’re going to find most useful and how you want to play. As Rise of the Tomb Raider progresses, you’ll naturally learn more skills and accumulate more weapons as the story throws in variations in enemies, environments and methods of traversing its terrain. The rope arrow from Tomb Raider is back but there are more opportunities to use it this time as most puzzles require you to draw one at least once. Lara will also have access to climbing arrows, a grappling hook and a re-breather as you advance but you’ll encounter areas early on that you’ll need to go back to once you’ve unlocked those particular skills for 100% completion, so there’s always something else to do if you’re looking to prolong your experience. 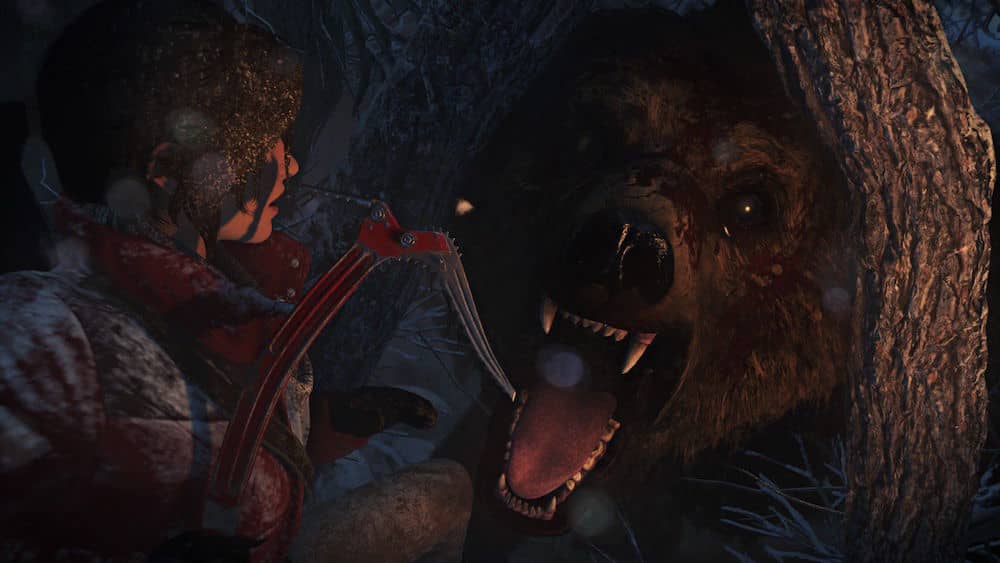 Another area of excellence for the folks at Crystal Dynamics are the action set-pieces. There’s at least one in each of the game’s story missions; though, most of the time, you’ll feel as though your entire experience of Rise of the Tomb Raider has been one giant action set-piece. Some of the more notable moments come when swinging between buildings that collapse dramatically as you fly by and zip-lining above a frozen lake while being chased by a helicopter but, as I said, this really just provides some punctuation in a paragraph made up almost entirely out of comic book noise-splosions. Despite most actions being fairly simple to carry out (generally with a single button-press), you never feel as though you’re free of danger – you can almost feel Lara’s fingers slipping on her climbing axes as you traverse an ice-wall or her chest tightening as you navigate a submerged cave system. I’ve sighed and gasped plenty during some of the more tense platforming sections and, when you’ve unlocked all of Lara’s impressive arsenal of archery and acrobatics, the game becomes a memory test as you try to remember which button you need to mash next to save yourself from a grizzly death by misadventure.

Of course, the thing that really stands out about Rise of the Tomb Raider is that you care about the characters at all. The villains of Rise of the Tomb Raider, while a little less developed than Lara, are quite absorbing and manage to retain a vestige of their humanity (while committing some quite serious atrocities) and the secondary cast is, likewise, well written and varied with some superb character moments, but the star of the show is certainly Lara herself. This may be helped by the award-worthy work of Lara’s voice actor, Camilla Luddington, whose performance really makes Lara stand out as being a believable, relatable, human character who has stumbled into a world that she’s struggling to come to terms with while discovering some shocking truths about her family and learning more about who she really is, all at the same time – and it’s a powerful journey to go on with her.

All of the above may be old news to the Xbox One bods who played this back in November but for us PC gamers Rise of the Tomb Raider is the new hotness, so I’ll address the port quickly before I conclude. Graphics have been ramped up from the original release and you can definitely tell the difference in quality between the two. Of course, you’re going to need a pretty hefty setup to maintain 60fps with the highest graphics settings (even with a higher end Nvidia GPU), but my AMD R9 290 Tri-X had no problems handling everything on high with some settings bumped up to max (though I did, I’ll admit, get some stutter on the more intense battlefields). There are plenty of settings, too, so you’ll be able to tweak just about everything from anisotropic filtering to shadow quality to tessellation and more to suit your hardware. Just be sure to leave PureHair switched on – it’s very pretty. All in all, it’s a spectacular port that goes to show that the developers absolutely know what they’re doing and do it very well. 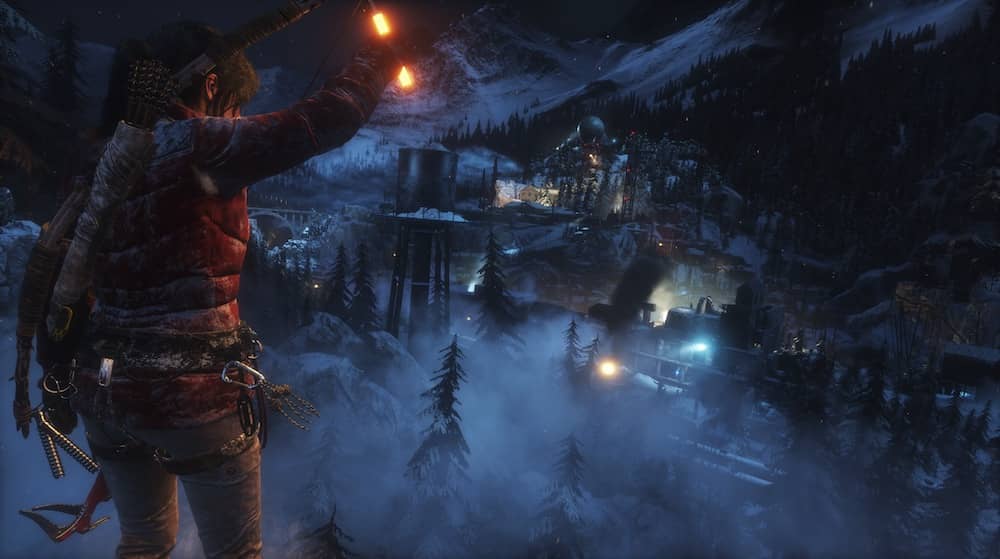 Rise of the Tomb Raider manages to do what a lot of action/adventure games wish they could do. It pulls in ideas from almost all of its contemporaries and squeezes them into a shape which, bizarrely, almost exactly fits the mould of what I think of when I think about action/adventure games. There may be a little too much combat and there may be slightly too few puzzles but Lara’s story, as well as her character, more than make up for not having another excuse to whip out the rope arrow. The stage has also been set for Lara’s next outing – her first as the fully-fledged Tomb Raider that she was always destined to be. And, maybe this time, there will be a T-rex.

Rise of the Tomb Raider is available on Xbox 360, Xbox One and PC. This review is of the PC version.