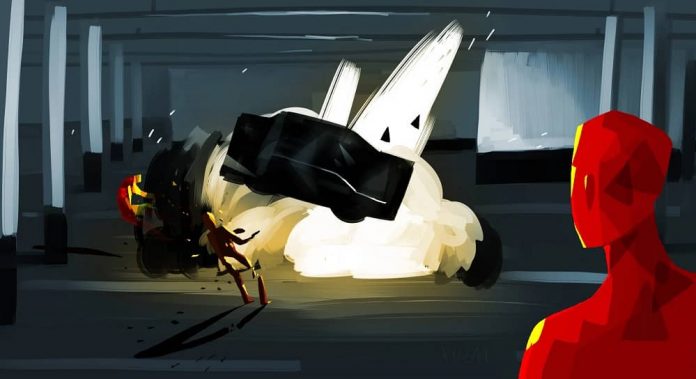 With Superhot, I see red, black and white.

I see contrast in all areas. I see faceless bodies that shatter into a hundred pieces like crystal statues when I put a bullet or sword through them; the remnants dropping like rubies on compacted snow. Six have already perished beneath my fingertips. I turn and punch the last one, disarming him with a single swipe, and grab the gun… line up the shot and… get shot in the back by a red guy with a shotgun. A nerve tweaks. The control squeals in my hands as I try not to crush it. I didn’t notice the last guy. Bugger.

Superhot is both endearing and unbearably frustrating at times. Originally created by SUPERHOT Team on the Unity engine for 2013’s 7-Day FPS Challenge, my first contact with the game was at EGX 2014 on the Oculus Rift DK2, and it’s sure come a long way since that demo. Though after initially experiencing it in virtual reality, I was a tad uncertain as to whether it would translate well as just a PC game once everything had flattened back down. Yes, it loses some of its charm but it still makes for an enjoyable game, regardless of the format.

In its original set-up, and especially with its computer chat boxes and fraying codes, the out-of-game moments remind me a little bit of Pony Island, though without the hacking puzzles, thank god. You (the nameless protagonist) get involved and obsessed with Superhot; a game that you’ve hacked your way into, and eventually you get deeper and deeper into the system until… well, something happens. I won’t spoil it.

In the world of Superhot, time is connected to the speed you move at: if you walk slowly, time moves slowly; if you run, times speeds on – and in that case, nine times out of ten, you die. In an FPS game where you die in one hit and can only see what’s going on directly in front of you, it’s safe to say you’ll have a lot of restarts. But what I admire most about it is its faith and dedication to its concept. Take away the time factor and you’re left with a one-dimensional (albeit striking) FPS game you could’ve found on a floppy disk in the late 90s. Yes, they still existed. The time element turns it from something tedious into something unique, and not just by giving you the option to slow down time when you want; everything in the environment is connected to your movements. It makes you think, and twinned with a stark environment it spelled success for the game in the end. 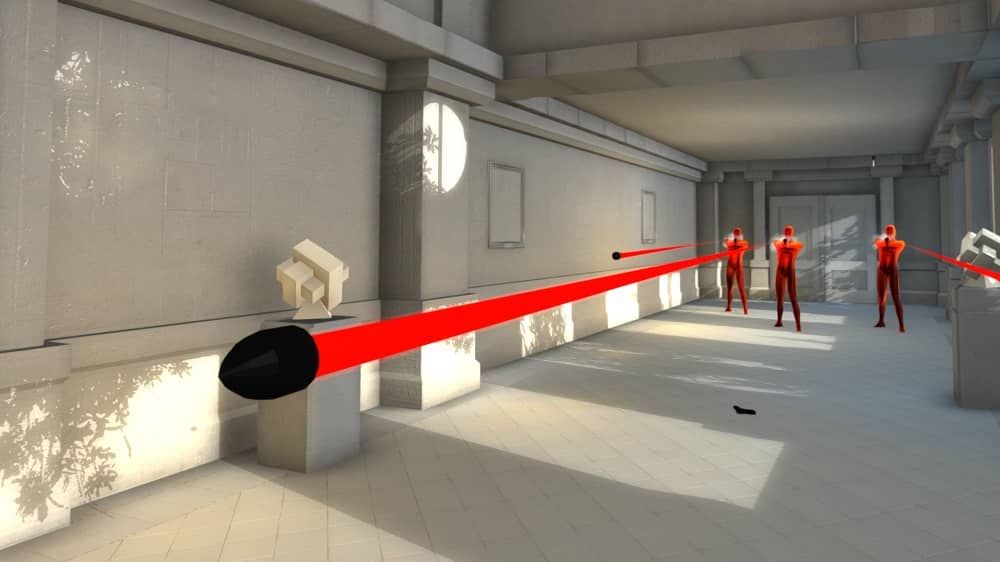 When you get into the game, its minimal design is really quite beautiful. The levels are designed using the sort of white Daz adverts brag they can get; the sort that makes you smell bleach when you look at them. Usually I’m really not a fan of those sorts of environments, inside and outside gaming, as it tends to give me a headache – I know, bust out the tiny violin while I finish. However, Superhot uses it right. The environment is white. The enemies are red. The weapons are black. For the amount they throw at you sometimes, this really helps you to respond quickly without unnecessary distractions, i.e. you see red – you kill red.

Don’t let its simplistic appearance fool you, though; Superhot is also quite complex when you look at the little details. One that immediately caught my eyes was the physics used for each different object, e.g. when throwing weapons, the katanas, shotguns, AKs and handguns will fly a relative length, but not as far as a bottle, billiard ball or ash tray. You also have to be aware of the time constraints tied to each element of the game, e.g. when shooting a handgun and standing still, time is relatively unscathed, but shoot an AK and time speed up to match the rate of multiple shots. By looking at Superhot this way, I’d be tempted to slip a “strategy” sub-category under its belt for safe keeping.

Despite how many times I died and retried levels, to complete the “Story Mode” it only took about an hour and a half, which is very surprising. I understand that with games like this, the number one rule is that you can’t drag it on for too long otherwise it gets stale, but I’ve never played an indie game that short that wasn’t episodic. Regardless of its length, the Story Mode part ofSuperhot has been very cleverly designed; my favourite point of which you’re forced to quit during the game and re-join, only to be greeted by a totally different message. With 32 initial levels, 12 challenges, and plenty of opportunity to unlock further maps on Endless mode, the game doesn’t just end when you’ve completed it. I can only assume with this format that SUPERHOT Team have left themselves open to incorporating more levels should it be desired in the future. My one big “but” for this occasion however is that with a £17.99 price tag, I don’t know how comfortable that price is for the amount you get with it.

When it comes to the gaming experience it’s difficult to discuss straight off the bat because it is undeniably repetitive. Like Portal or Portal 2, you load up the levels, you complete the challenges, you move on to something more difficult, and so on. Rather than throwing you into it with a list of controls and letting you plod through the levels yourself, their thought-out segmentation of your abilities helps to give you something to look forward to. The final ability you don’t actually get until the last chunk, and for very good reasons. 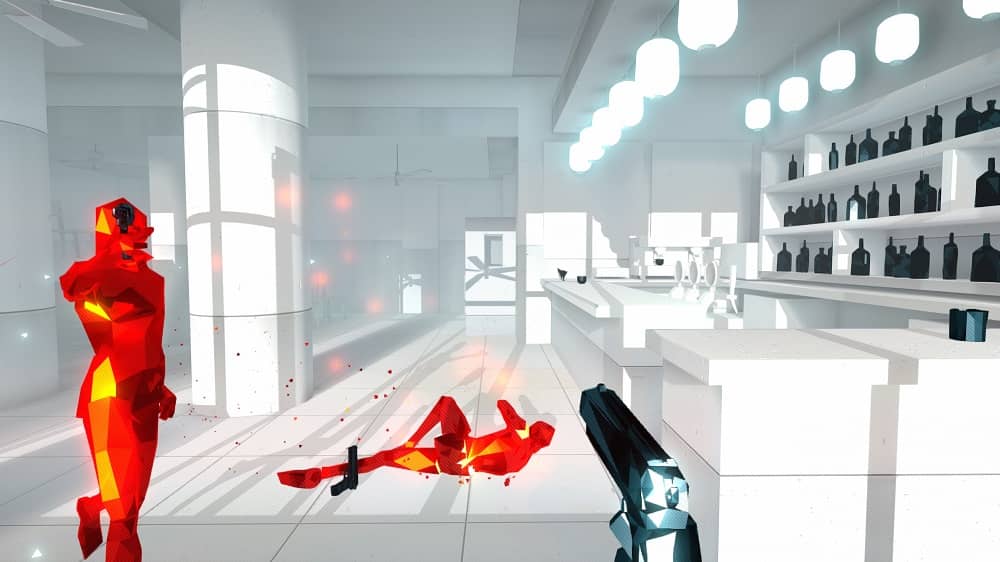 Superhot isn’t ground-breaking. It’s a fun game with a unique concept and I was fully immersed during my playthrough, but I like to look at the replay value of anything I review, especially when it comes to FPS games. Some people might find it addictive and they might get huge amounts of enjoyment out of playing through the challenges and endless mode, but for me, after playing through some of the after-game content I’m fairly confident that I won’t pick it up again, at least not for a while. Not because it’s a sub-par product but because there’s nothing else for me to gain in playing it. In the end, it’s a creative take on the FPS genre that’ll provide a few hours’ entertainment, but I’m not sure I can whole-heartedly recommend it based on its relatively high price point.

Oh, there was something else I was supposed to say at the end…

“It’s the most innovative shooter I’ve played in years.”

Superhot is available on PC and will be coming to Xbox One soon. We reviewed the PC version.