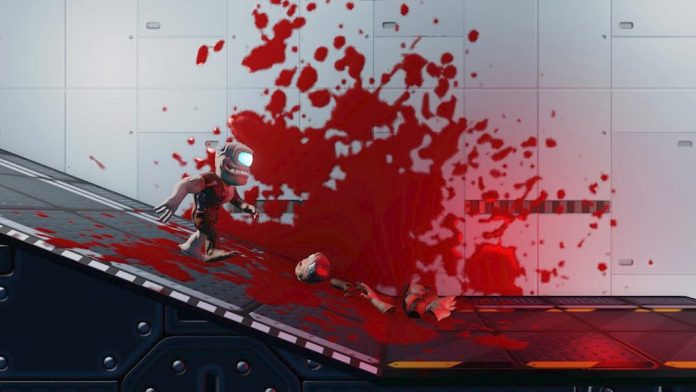 As the title suggests, I’m here to review 101 Ways To Die, but first, let me upset some people: I don’t like indie games.

Okay, that’s a broad statement. What I mean to say is, I’m not one of those gamers who thinks all indie games are great or that just because something was made on a tiny budget by a few people, it should automatically be successful.

Having said that, I have a lot of time for those which are done well. I’m talking Fez, Braid, Limbo, Rocket League and (hopefully) No Man’s Sky. Fortunately, 101 Ways To Die is one such game. The developers at Four Door Lemon have produced a smart, fun game with good ideas which are both plentiful and enjoyable.

The premise is that Professor Ernst Splattunfuder, an aging and unstable scientist has dedicated his life to discovering the titular 101 Ways To Die. He collated his work into a single, bulging tome before one of his experiments went awry, destroying the book and leaving only shreds of each page remaining. As he is now too old to replicate his work he hires you to assist him. This is all told via a quirky animation which resembles a classic fairy-tale.

The mechanics are this: a green pump produces Splatts – little humanoid/zombie creatures – and their goal is to plod their way across to a red pump, usually at the opposite end of the level. Each level is comfortably visible on the screen all at once; the camera can be zoomed in and out with the triggers, or angled slightly, though the angles make very little difference. Your aim is to stop the Splatts from achieving their goal by killing them in a variety of different, often gloriously gory ways. 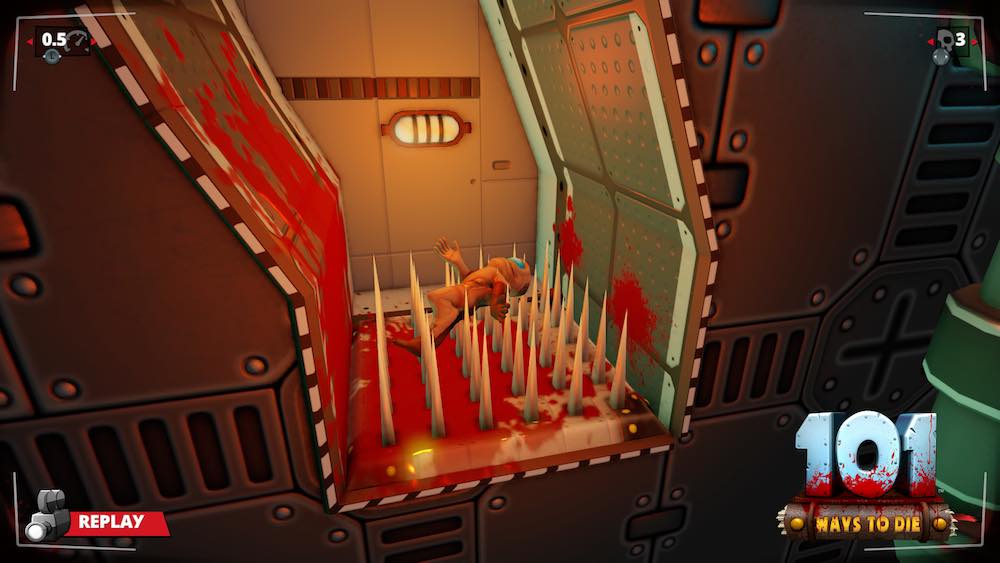 To begin with, you’re responsible for placing all of the traps in the level, before the game begins to take away your sense of control and it forces you to work with things that are already fixed in-place. These traps can vary from Sonic the Hedgehog style spikes to landmines, lava and large, electrified steel balls. Some can be combined in a number of ways, like a goo pool forcing a slip into another trap. There’s even cake to distract the Splatts, setting them up to be taken out in trickier ways.

It’s straightforward enough to begin with; knowing that the Splatts will jump from a ledge, you can place some spikes as a nice surprise for them to land on, perhaps adding some goo as I said before, for them to slip on to seal their fate. As the game wears on, you’ll need to chain these weapons together.

An explosion from a landmine could blast the Splatt into the air, before a cannon shoots it across the level into a pool of goo which slides it neatly into a lava pit. Of course, a regular Splatt’s limbs would be severed by a cannon blast, so this could only be achieved with a Tank. These are slower and more sturdy creatures who can take more of a beating, letting you use these longer combinations. Rapids, however, are much faster than either of these; these guys are pretty frail, often not staying in one piece after so few as one or two hits.

These extra two classes, while not adding a huge amount to the game individually, offer an extra layer of challenge, transforming a straightforward level into a mind-bending conundrum. You can usually clear a level by only completing the “Graduate” challenges but the elusive three-star reward will only be yours if you can also complete the “master” objectives, too. 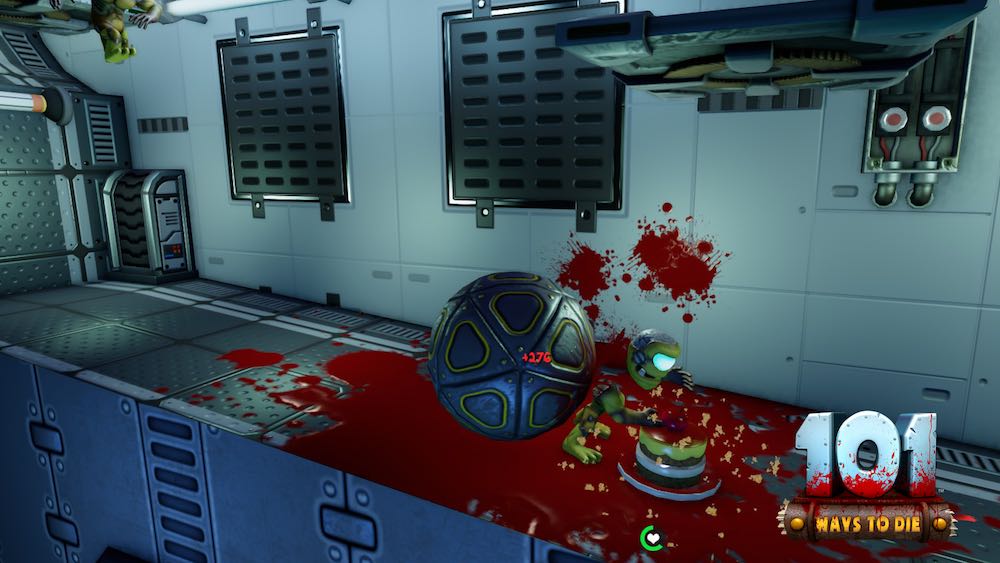 Graduate challenges are usually simple; only one Splatt can escape, kill one Splatt with spikes and so on. The master challenges are significantly more difficult and will require some thought. These usually involve elaborate combinations of traps with precise timing. You may need a Splatt to be in just the right position, then you’ll set off the timer on a bomb which will catapult him into a ball, the ball will then roll down a tunnel towards your cannon and your cannon shot will shoot the ball and squish the remaining Splatts just as they are about to clear the level. That’s one way to die. Just 100 more to go…

This game is genuinely funny, too. After several hours I still found myself chuckling at the fates of some of the unfortunate Splatts or at a name of one of the 101 Ways To Die, like “Slipping a Wa-hey!” (slide in goo into the path of a fan which blows you into some spikes) or That Ol’ Chestnut (have a steel ball dropped on you whilst you stop to eat cake). If you particularly enjoy one of them, you can even watch an instant replay of each one at the end of each level.

At its core, this is a puzzle game and it works a little like an entertaining crossword, where the placement of one of the existing traps is usually a clue to where one of those in your inventory should be placed, in turn reducing the number of possibilities where you can put any of the others. While the difficulty does increase as expected, the learning curve is just right, introducing new elements as you progress. Sometimes puzzlers can become more frustrating than fun towards the end, but that’s fortunately not the case here and the variety on offer keeps the pace fast and fun right to the end.

This bright and breezy atmosphere is helped by the upbeat and strangely enjoyable music. It’s always at the right level to stay in the background without becoming distracting, but once you notice it each time, you’ll love it.

Despite the praise I have lauded so far, I do have my gripes. Well, gripe. The heads-up display is too small. My TV is pretty big and I sit the correct distance away; but each time I brought up the HUD to view my objectives, I really struggled to see them, sometimes having to lean toward the TV to figure out what it said. 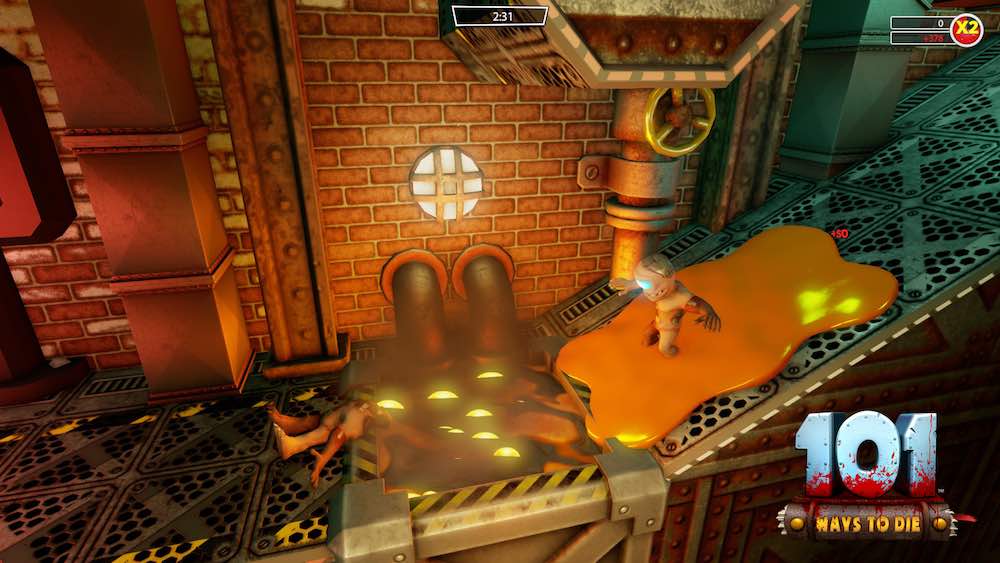 Other than the HUD, the game looks very slick. It’s clearly an indie title at heart, but developers Four Door Lemon have put a lot of effort in and the polish has paid off; textures look realistic, worlds and characters are detailed and everything looks crystal clear in HD, especially the red mist/blood spatter that you’ll come to love when you see those little Splatts impaled on spikes or fall apart at their seams.

101 Ways To Die is great fun; each level is superbly crafted and the whole experience is enjoyable. Loading times are almost non-existent and the install size is only notable by the fact that it’s a mere 289mb. How they packed it all in to that, I’ll never understand. There are plenty of levels, which gives it a good sense of value and the overall quality affords a uniquely well-made feel. At £10.99 ($14.99) it seems to be priced pretty perfectly, if maybe 10% more than I would have expected, but the 30 levels and overall objective (combine traps until you have discovered every one of the possible 101 Ways To Die) provide plenty of replay value. In short: pick it up when you can.

101 Ways to Die is available on PlayStation 4, Xbox One and PC. We reviewed the PS4 version.