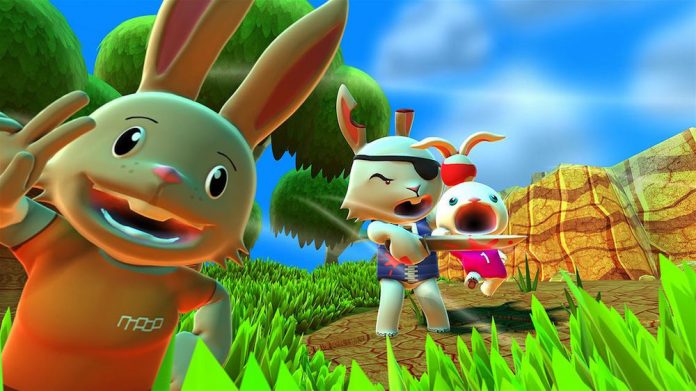 If you were thrown into Blast ‘Em Bunnies without prior research, you’d consider it to be a child’s game, with the somewhat childish art style and general simplicity.

Well, that’s until you encounter what the developers over at NNOOO decided to name the “Throat-slitter Bunny”. No, really, there is a bunny in this game that takes a knife and cuts the throats of child bunnies. Can we get PETA on this? The RSPCA maybe?

So, I like to jump into games to make up my own opinion before I do any real research. All I knew about Blast ‘Em Bunnies going in is that it’s basically a horde-mode game in which you play as a bunny, defending themselves against other bunnies… Right, from now on, I’m referring to them as rabbits, we’re all adults here. Horde-based games done right can be great games, some examples being Killing Floor and even Super Crate Box to an extent. Well, has NNOOO made a good horde-game, as I’m sure you’re wondering? Short answer: No. Not at all. It’s atrocious.

The review copy we received was the Super Mega Bundle, including all DLCs. Considering this game isn’t even out at the time of writing this review, it has a seemingly ludicrous amount of DLC available for it already. Looking at individual prices of DLC, skin packs – of which there are already five and contain three different skins for each enemy – are going for €1.99 (£1.54) each (bear this all in mind, I’m getting to my point.) and “arena” packs are being sold for €2.99 (£2.31) each. Guess how many arenas there are in the base game? One. There’s one arena in the base game, with no variation in skins for yourself or the enemies. If you want anything more than the one level and the one set of enemies, you’re going to paying anywhere from £11 to £19 extra on top of the base price. The game feels massively incomplete without the DLC. The base game is a small piece of the game, the fact that you have to pay four times the amount you paid for the base game if you want the full experience is an absolute piss take. 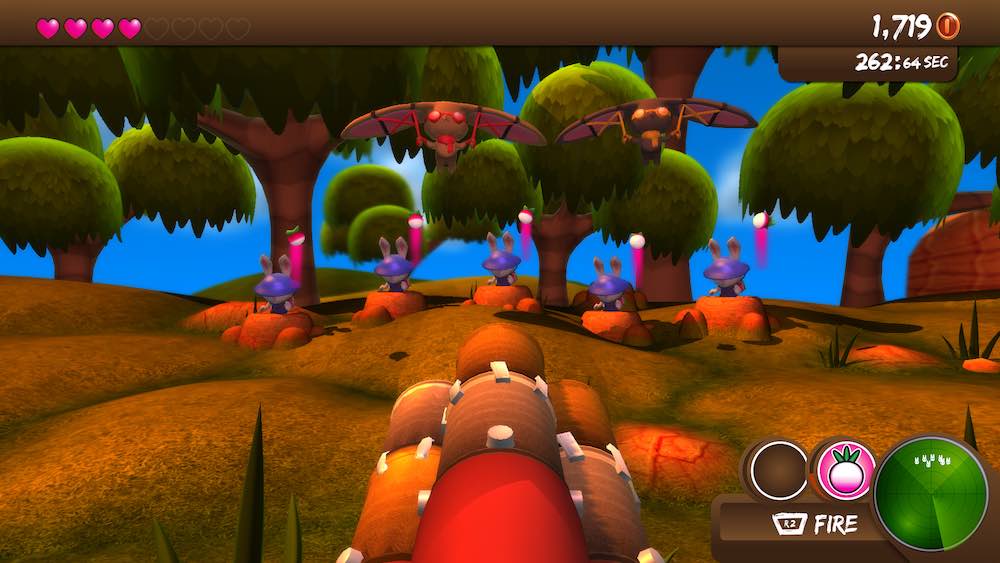 Right, so, gameplay, let’s talk about that. Remember that Rambo game that came out sometime in the previous couple of years that everyone despised because it was a poorly made on-rails shooter? Well, Blast ‘Em Bunnies doesn’t even have rails. You sit stationary in the middle of the so-called arena, shooting at rabbits that spawn around you in waves. The only actions you have to choose from as a player are to shoot and rotate 360 degrees on an axis. I’ve played flash games involving the massacre of rabbits as they approach in hordes that were so much more fun than this. Again, this leads me to question who the target audience for this game was supposed to be. This game belongs on the Wii, but like four years ago. It’s so simple only a child could find some mindless enjoyment in it, and yet they have homicidal throat-slitting rabbits and an unreasonable level of difficulty from the tutorial onwards? Really, I, a relatively experienced gamer, died in the tutorial. Blast ‘Em Bunnies clearly isn’t aimed at kids, and yet it’s so… childish.

I suppose I’d best talk about what the game’s got going for it before I get a harshly worded email from the devs. The character design isn’t the worst thing in the world. While everyone happens to be a rabbit, the variation from enemy to enemy is somewhat interesting. You’ve got a whole roster of nine different enemy types, ranging from the tank-types to the aforementioned “Throat-slitters.” I have to say, the design of each rabbit is quite pleasing aesthetically – except for the player’s rabbit, ironically, being the main character in a way. My only issue with the physical design of the rabbits is the fact that, while the majority of them wear some sort of t-shirt or jacket, none of them wear trousers. It makes me feel uncomfortable. Besides aesthetic differences, the enemies seem to have a great deal of variety in technical design as well with varying abilities, that is until you realise each one just comes at you at a different pace utilising a different set of animations and requires a varying amount of ammunition to take down. Speaking of ammunition, Blast ‘Em Bunnies‘ combat is the least satisfying combat I’ve ever suffered through. Have you ever played a game in which you’re given a gun that has some weight it? Some real substance? Star Wars Battlefront 2 came out in 2005 and has a better sense of impact in its combat. I’d go into the variety of different weapons but several of them are practically the same, none of them are fun to use. 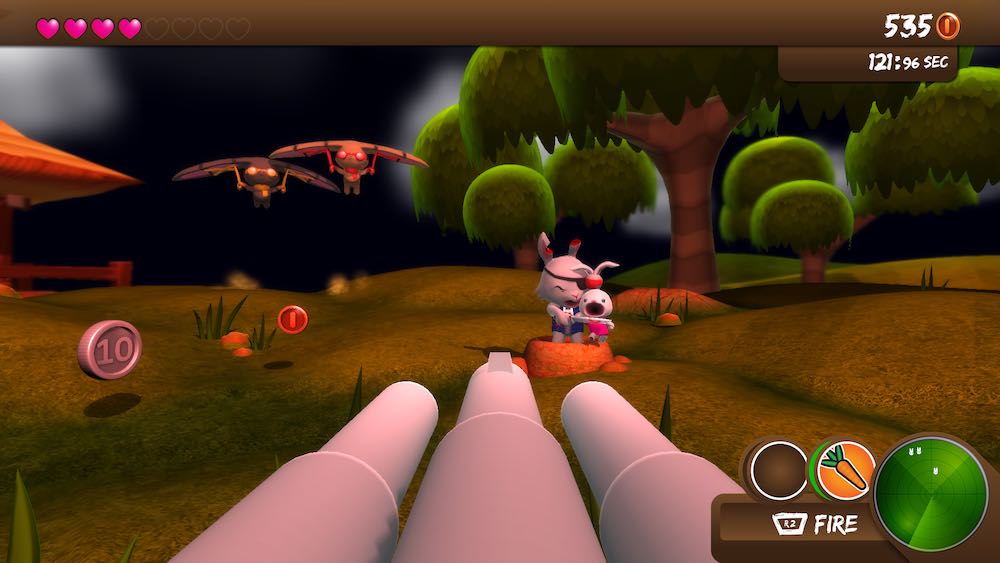 All-in-all, I’d strongly advise you to not buy this game. From its ridiculous lack of content to boring and repetitive gameplay, there isn’t much in the way of redeeming features for Blast ‘Em Bunnies. Frankly, it’s unreal that it’s available on PS4, Xbox One, 3DS and PC. It’s just an unfinished, poorly thrown-together game.

Blast ‘Em Bunnies is available on PC, Xbox One, PS4 and Nintendo 3DS. We reviewed the PS4 verison.