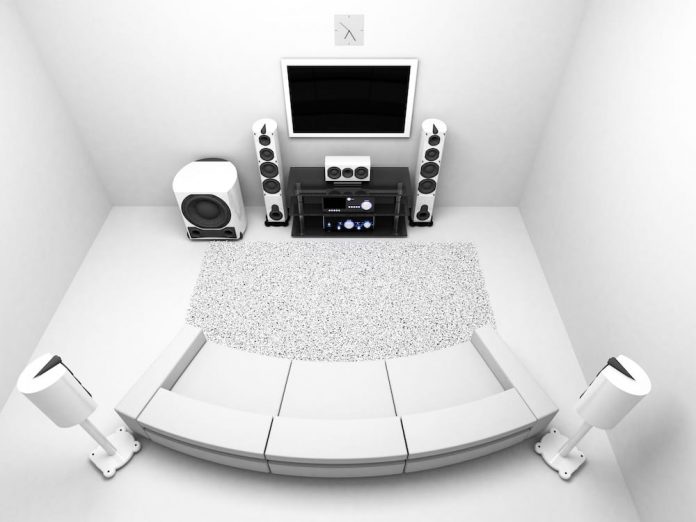 As a lifelong music enthusiast, I’m a stalwart consumer of stereo sound.

I owe my adolescence to a pair of middling speakers and a booming subwoofer, and when I’m not in the comfort of my own home, a set of headphones clamped around my skull does wonders to dampen the frenzied street ruckus. I never really gave much thought to a surround sound setup; I just assumed they cost more than they were worth – the cherry on top of a custom gaming rig or a monstrous home cinema.

When I first rifled through my parents’ basement a few years back, scouring for tech to add to my bare-bones setup, I came away with three Logitech speakers and a subwoofer. The centre and rear left speaker were nowhere to be found, so I stashed the third speaker back where it came from, and made do with dual speakers for as long as I can remember. They were proportionate in size to my 24” monitor and worked well enough, so I never had much reason to complain.

By a thin stroke of luck, the two missing speakers surfaced a few months ago after a lengthy basement renovation. With the full set in my hands, I decided to give surround sound a go and I wired everything in – or at least, I tried to. It turned out that my parents’ speakers were old school, as in analogue old school. All the speakers plugged into the subwoofer, with a three-way aux cable coming out the other end. There wasn’t an optical jack in sight, so there was no way for me to plug the cables into my monitor, which had only a single audio input. So I booted up my laptop and threw down £11 for a three-way splitter through Amazon, which I figured would distribute sound evenly through my newly assembled set of speakers.

The next day, I rummaged through a bevy of tech forums and quickly realised that I had purchased rubbish. Well, to be fair, not exactly rubbish – yes, the three way splitter would cause sound to emit from each and every speaker, but it was just doubled up stereo sound, not genuine 5.1. Upon further research, I concluded that the correct device to purchase was a 5.1 Analog to Digital Decoder. This obscure Chinese gizmo would allow me to plug the three ends from the subwoofer into my monitor and run an optical cable directly into my Xbox One. It seemed simple enough, included an optical cable, and cost only £21 – God bless the Chinese. Three weeks later, the magic box arrived in the mail, and I unwrapped it with feverish anticipation.

My last impression of surround sound had left an indelible mark on my psyche. I recall it with ease: I was riding high on the dope train at my old condo unit, making the most of the various amenities my roommates had so kindly installed in the living room – a Marantz 5.1 home theatre system and very widescreen TV. I was catching up with a friend in the form of Mortal Kombat X, and during episodes of freakish violence – eyes bulging and ears tingling – we would hurl lines at one another like, “Dude, did you hear how badly I crushed your skull in the rear left speaker?” Okay, maybe not exactly like that, but words to that effect. As I finished plugging in the last of the wires and the memory came racing back to me, I looked forward to recreating that sensation, but just as soon came to the realisation that without drugs it probably wouldn’t be the same. That didn’t mean it wouldn’t be as enjoyable, just… different.

Digressions aside, when the Xbox One loading screen was done taking its sweet time, I navigated to the settings menu and adjusted the sound output. My first choice of game was obvious – I couldn’t think of a game that screamed immersion louder than Grand Theft Auto V. Closing the curtains and dimming the lights, I cranked up the volume dial and eased into my recliner chair, and within moments I stepped foot into the bustling streets of Los Santos.

Of course, the first thing I did was whip out my shotgun and bust out a few dozen rounds. BOOM. BOOM. BOOM BOOM BOOM. The gunshots careened off cars, walls and people, echoing all around me. People screaming from behind, vehicles exploding in front. Waves of sound came flooding in from every direction. As a cop car zipped by I turned around slowly, and the whirr of the siren swiveled from the front to the rear right speaker. When the cops started closing in, I clambered into my pimped out red convertible and put the pedal to the metal. The engine roared out of the rear speakers while the front channel blasted “Still D.R.E.”, the thunderous bass making my room tremble savagely. With the cops in hot pursuit, I zipped down the street with the top dropped low and my eyes on the road, making a furious beeline for the freeway.

Who knew a set of crusty analog speakers could bring me such a sweet dose of adrenaline and unbridled ecstasy? It turns out that finding the best PC gaming speakers for your own setup can make a hell of a lot of difference. Since then, I’ve been replaying various games from my collection – Rise of the Tomb Raider, Forza Motorsport 5, Arkham Knight – reaping the fruits of my freshly goosed up rig. The ability to hear enemies coming from all angles during high-octane firefights keeps Lara Croft on her toes and on the prowl. Cruising across the tundra in a fully decked out Lamborghini Gallardo has never sounded and felt better, and touring Gotham City with the rain in my ears really makes me feel like I’m a caped badass swooping around a wicked urban sprawl. Once you’d made the switch, you’ll never look back – and you won’t have to, because you’ll hear it coming from behind you.