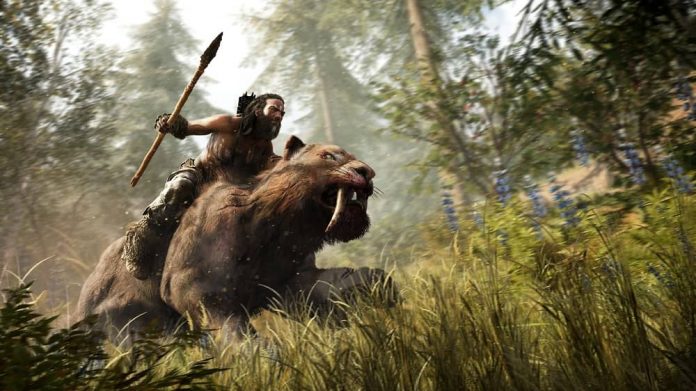 With an announcement less than five months before release, we really had no idea what to expect from Ubisoft’s latest open-world epic. Was another Far Cry necessary, with less than 18 months since the last release? Turns out yes; yes it was, because Far Cry Primal is nothing short of brilliant.

Playing as Takkar, a hunter from the Wenja tribe, you’re thrown straight in the action as you travel with what remains of your tribesmen to find the lost land of Oros, where more Wenja are said to live. Unfortunately, your journey has been long and arduous, and your tribe gets weary; in a desperate attempt to find food to survive, you chase down a mammoth, only to be struck down by a sabretooth tiger. Your travel companions don’t make it, but you, Takkar, manage to run to safety, and face the last leg of your journey alone. Luckily for you, the beautiful land of Oros is just in front of you – as is your whole epic adventure. Stopping to find shelter, you encounter a tribeswoman – a fellow Wenja – who tells you of Oros and of more Wenja who live scattered across its lands. It’s here your adventure truly starts: it falls to you to find the Wenja and bring them home.

The opening segment of the game, no longer than 15 minutes or so, is unfortunately the most storytelling you’re going to get here. Far Cry Primal‘s narrative is perhaps the weakest part of the game, but taking into consideration it tells the story of simpler people in a simpler time, you can forgive that it’s hardly going to rival your favourite soap opera in terms of any kind of depth. In these primal times, only three things really matter, and that’s food, shelter and safety. As a result, your only real goal throughout the game is to build up the Wenja tribe by finding more people to move to your village, and destroy the rival tribes that threaten your safety. It’s very simple. 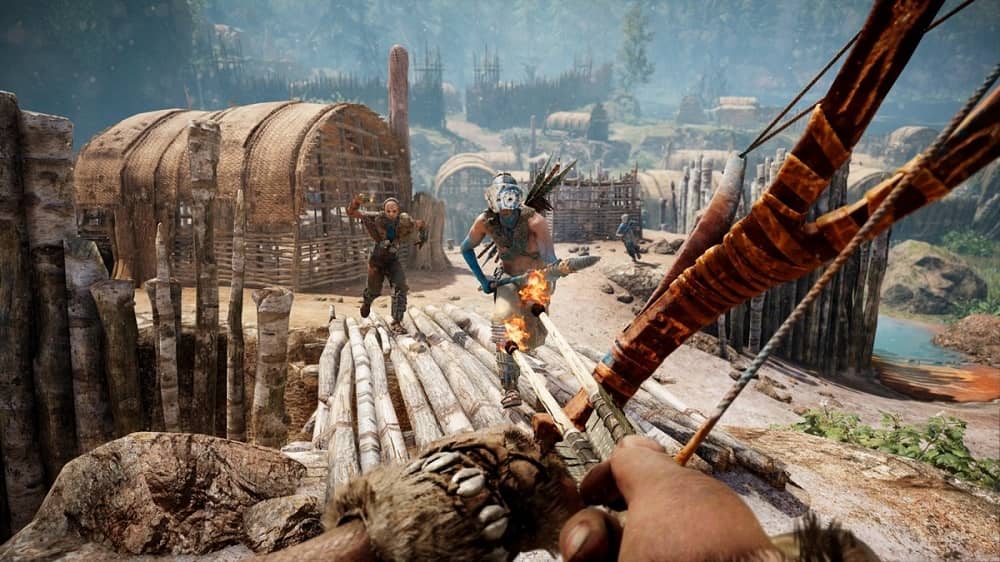 The little narrative that does exist is told through a smattering of main missions. Far Cry Primal presents itself as being rather non-linear – at least to begin with. Rather than in typical open-world game style where you have one main story mission to complete at any one time, here you have a choice of several that you can tackle in any order you wish (though sometimes providing you have the required skills). The missions on offer are ranked from Easy to Very Hard, and this is the only indication you have on what order you should be playing them in. The freedom you’re given as a result is very welcome, although a little more linearity would not have gone amiss at times. The lack of guided direction meant, in my case at least, the last few missions were poorly paced; there came a point where I was left with no main mission markers at all on my map and I had to return to my village to complete an upgrade before I had any clue what to do next. The last two or three missions then became a to-and-fro exercise of fast-travelling to mission, fast-travelling back to my village, and rinse and repeat. It’s hardly a major gripe but it did make the whole thing feel rather anti-climactic .

What Far Cry Primal lacks in story however, it makes up for in pretty much everything else. Firstly, the visuals are nothing short of stunning. This is by far one of, if not the prettiest open world games available. Environments are flourishing and incredibly detailed; character models are very realistic and the plethora of wildlife on display is incredible. There will be times when you have to stop whatever it is you’re doing and just gape at the awe-inspiring view in front of you – even if that does mean getting mauled by a mountain lion. Hey, it’s all part of the experience. Far Cry 4 looked pretty inspiring, but Primal, for me, blows it out of the water. Some of the locations used look somewhat familiar – snow-topped mountains in the background; luscious foliage – but it’s understandable given that both 4 and Primal contain a lot of barren, unspoilt land… despite the 12,000 year time gap between them.

Given how sublime Far Cry Primal‘s graphics are, you’d be forgiven for thinking it’d have to compensate somehow in its performance, but – rather surprisingly – it ran silky smooth constantly during the 20 or so hours I spent with the game. I can count on one hand the number of times the framerate slightly dropped, and on those occurrences it lasted no longer than a few seconds. Even during busy combat sequences with upwards of 20 enemies – and a mixture of both humans and animals – the framerate remained consistently solid. Coupled with the intuitive (and familiar) control system, it all makes for extremely enjoyable gameplay. 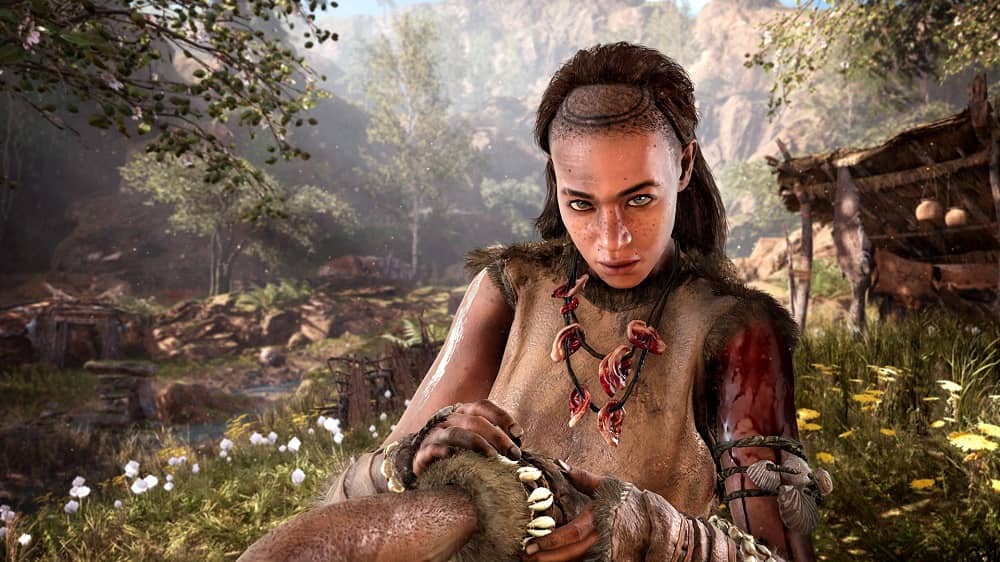 The beautiful graphics are complemented by a very ambient soundtrack. There is rarely any background music, which admittedly feels a little odd at times, but the organic sounds of the environments around you work really well at stilling the silence. It means that when background music is used, it’s that much more effective; tribal drum beats kick in when you’re approaching danger or when engaging in battle which perfectly sets the tone and increases the tension. The sound effects used are a bit of a mixed bag, however – some stock sounds have been used which, to the more aurally astute amongst us, may be slightly irksome, but personally I barely noticed as I was too engrossed in the action.

Far Cry Primal‘s map is absolutely huge, and is literally teeming with objective markers and missions. I challenge even the most ardently focused of players to travel to their intended location without getting sidetracked on the way. It’s nigh on impossible. If it’s not a preset mission – varying from hunting a particular animal, to scavenging certain objects, or exploring a secret cave (Lara Croft raiding tomb-style) – then it’s a pop-up “event” to save or protect your fellow Wenja people, of which there are plenty of. There are also, as you’d expect, lots of collectibles to discover across the map. You’ll be granted extra XP for finding them, but besides full game completion, they don’t hold much benefit in terms of actual gameplay.

Of course, away from main missions, side missions and collectibles, the map is alive with resources to hunt and collect. It’s easy to get distracted simply finding resources you need to craft your next upgrade, or hunting down an animal whose skin you require to improve a hut in your village. All hunted and scavenged materials have a purpose – be it upgrading your weaponry, improving your village or crafting ammo – so it pays to pick things up along the way. Some materials are extremely common and within an hour or two you’ll have run out of space to carry any more, but there’ll likely be times when you have to do a bit of farming to find a particular item you need for a particular upgrade. Given that the game helpfully tells you where certain materials and animals can be found on your map, it’s not a tedious task, and actually, can be quite a cathartic part of the gameplay. The hunting, especially, is great fun, and wild animals are the enemies that likely pose the biggest threat to you. That is, until you tame your own bigger, and more powerful beast.

Yup, Far Cry Primal lets you tame your own beast to fight by your side and accompany you on your missions. Like a giant savage pet, you can even show affection to your chosen furry warrior, with a handy “pet” command (though annoyingly this is tied to the same button as “heal” or “ride”) that offers no advantage to you other than a close-up of your fuzzy friend’s face for you to “awww” over as Takkar tickles under its chin. The beast taming is a great addition to the game and is unlike anything Far Cry has offered us before. The taming skill is unlocked fairly early on in the story, and your ability to tame bigger and more dangerous beasts increases through upgrades that you can unlock as your progress. With a ferocious beast by your side, combat becomes much easier as you can command your animal to attack anything on your behalf – and when he senses you’re in danger, he’ll act on his own accord. What a good little pet. Beasts have their own health bar which you’ll have to watch; should they die, you’ll get a generous window in which to heal them, and even if you miss out on that, it’s only a case of going to your beasts menu and spending a conservative amount of resources to respawn them. 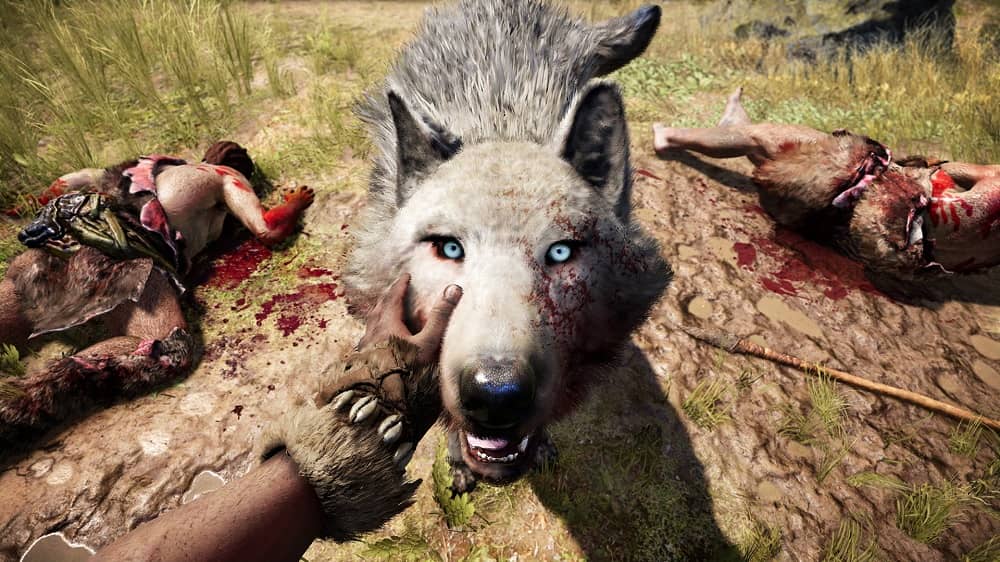 Far Cry Primal is an epic adventure that really encourages you to sink your teeth into the incredible world it offers up to you. Despite a “few” historical inaccuracies and silly nuances, Primal‘s world is believable and immersive, even down to the language spoken – there’s no English accents to be found here. Whilst it’s a shame that the story and main campaign are both a little weak, there’s so much else on offer that it’s easy to forgive. Fantastic visuals, varied locations, so much content you’ll be kept entertained for weeks… and let’s not forget the giant beasts ready to fight by your side – what’s not to love? Oh, and did I mention you can ride around on a woolly mammoth? This isn’t just a re-skinned Far Cry 4 as many have claimed; Far Cry Primal is a entirely different experience with an incredible world all of its own. If you’re a fan of open world adventure, then this is certainly not one to miss out on.

Far Cry Primal is available on PS4, Xbox One and PC. We reviewed the Xbox One version.