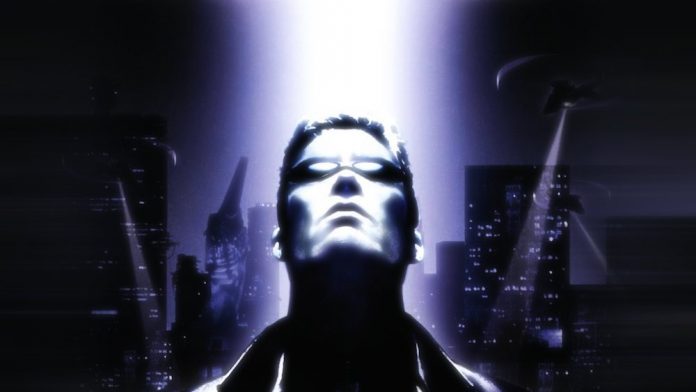 If you’ve played a video game since the year 2000 then chances are that Deus Ex had an impact on it in some way; its large open-world hubs, encouragement of multiple play styles and an immersive and reactive story-line have left a huge mark on the industry, the benefit of which we are still enjoying today.

Deus Ex is a difficult sell. If you haven’t played it by now, then it’s unlikely you ever will. Hopefully this article will change your mind, as I’d hate for you to miss out on this cornerstone of modern gaming.

You play as United Nations Anti-Terrorist Coalition (that’s a bit of a mouthful, we’ll say UNATCO) agent JC Denton, a man augmented with nano-technology, as is fairly standard in the game’s version of the future. These augmentations afford you certain Six Million Dollar Man type abilities such as running faster, jumping higher, lifting great weights, seeing in the dark or even cloaking or healing yourself, among others. These are all unlockable and upgradeable as you play in a pseudo-RPG style, meaning your experience is very different to that of your friends.

“Augmentations afford you certain Six Million Dollar Man type abilities such as running faster, jumping higher, lifting great weights, seeing in the dark or even cloaking or healing yourself”

That’s Deus Ex‘s main focus; every experience is different from the last. All of the missions are sumptuously designed to allow completion in any number of ways. The origin of this mechanic can be dated right back to the 70s and to Will Crowther’s ADVENT which was the first computerised text-adventure game, following on from years of printed books featuring “Turn to page…” options. Deus Ex allows the same freedom; where usually FPS games restrict you to a corridor, you are encouraged to scour the environment for a unique angle to tackle the next objective. Do you walk in the front entrance of a hotel and try to find the room you want, or do you assist the manager with something, or sneak a look in the guest book to find a room number? Alternatively, you could sneak onto the roof and drop in, or climb the fire escape and look through the windows. Whichever route you took was usually up to your imagination but it made the game feel so fresh compared to what you were used to. Even down to which objectives you tackled and in which order.

The opening mission, set on Liberty Island, New York, introduces you to your brother Paul, and he asks you how you prefer to operate. Your answer will reward you with either a GEP Gun (Rocket Launcher), a Crossbow or a Sniper Rifle. Your main objective is to reach the top of the recently damaged Statue of Liberty. How you do this is up to you. If you choose to walk straight ahead towards the statue, you’ll be fired upon by the NSF (National Secessionist Forces) and their mechanical sentries. You could return fire and force your way in with one of your newly acquired weapons, perhaps even sniping at the NSF from a distance or you could simply try to avoid them and skirt around the edge looking for a way in. You’ll find plenty of opportunities; a contact is nearby, track them down and use the phrase “Iron & Copper” to gain access to an underground access panel, or look further around to find some shipping containers which you can use to climb up. Alternatively, if you chose hacking as one of your skills early on, you can disable the sentries and cameras and just sneak in, literally, through the back door with the aid of a lock-pick. 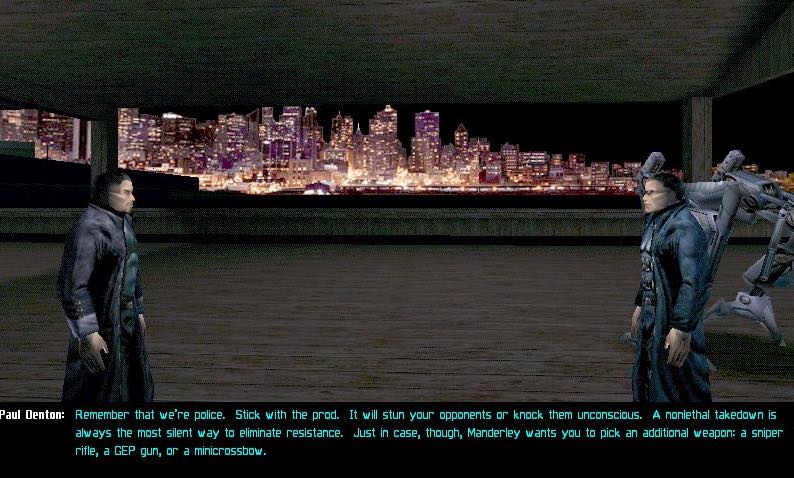 Every single level and objective is designed with this kind of freedom in mind. Every action you choose, if relevant, will be acknowledged by the story; characters might refer back to your exploits making the whole process of searching for alternative options feel encouraged. Instead of being greeted in the same way however you arrived to meet someone, they may comment on it being a little odd that you climbed through their window instead of using the door. In larger ways, perhaps you came across a gun fight in Hell’s Kitchen which you put a stop to. In doing so, the residents would feel safer and be more willing to help you, just one example of many throughout the game.

You’ll travel the world, too. Instead of being confined to just New York City, you’ll visit Area 51, Paris and Hong Kong, with several different hub areas within each location. This was a fairly unique mechanic, too, instead of loading one level at a time, you’d load a whole area which you could happily free-roam around and look for hidden goodies, areas and missions. After accepting a side-quest from someone, you could then head off to a particular building and work your way in, à la Liberty Island; complete the objective and it could make the main campaign easier later on.

“Instead of being greeted in the same way however you arrived to meet someone, they may comment on it being a little odd that you climbed through their window instead of using the door”

The story that takes you to all of these places is complicated and steeped in mis-directs, deceit and double crosses. It’s even perhaps a little too long lasting around 24 hours for a standard play-through and up to 40 hours for the completionists; but given its high quality, you can’t say that’s not good value! The overall premise is based around several popular conspiracy theories. You work alongside the Illuminati, battling another mysterious group called the Majestic 12 and both of those are fighting for control of the world. Pay attention to the details and it’s about more than just that; it’s about what it is to be free and if you’d want freedom at the expense of quality of life.

I keep suggesting that you pay attention to the story and that’s partly because if you just look at Deus Ex, well, it’s not pretty. In fact even at the time it was released some of the graphics were dated. I remember my friends and I mocking some of the character models who seem to have their guns magnetically attached to their hands. But there it is; we were talking about it! These days conversations about games usually consist of “What’s *such and such* like?” followed by “Yeah, it’s good”. That’s not a conversation! A game that gets you laughing and joking around because you all love it is so rare! Yes, the graphics are a little shoddy, but they’re a foible, nothing more. The fun is to be had by discussing how you completed an area. That first section on Liberty Island; how did your friend get inside? Was it better than your method? Why? That’s the sign of a great game. 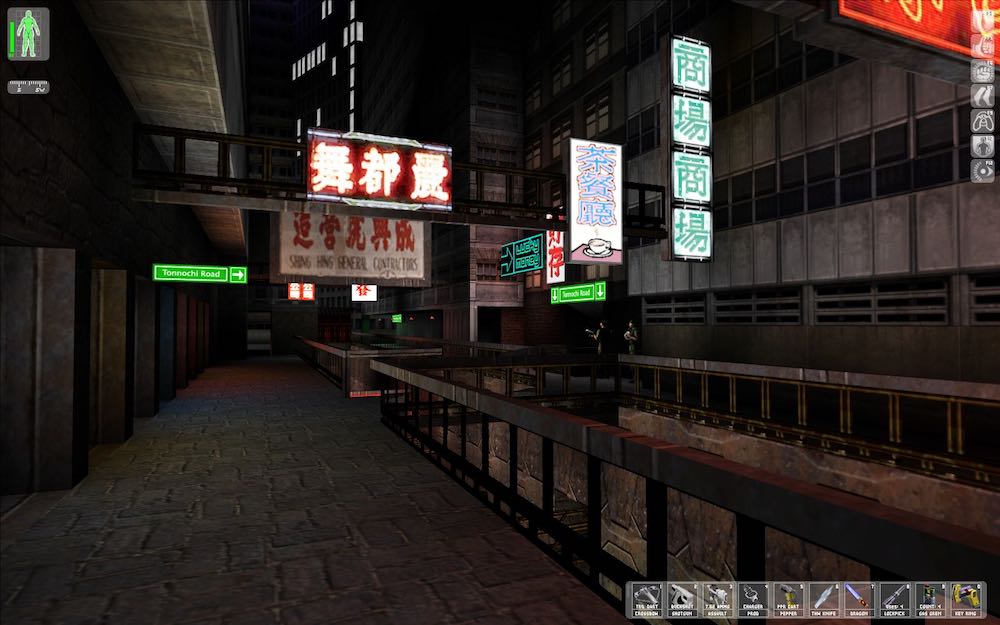 Deus Ex really is the thinking man’s shooter – Yes, you can go in all-guns-blazing (or Dragon’s Tooth Sword waving towards the end) but should you not want to – or if the odds are stacked against you – there’s always another way to play. The ambience in every level is immersive and only improves on what is already an intensely enjoyable experience and if you pay attention to what the other characters have to say and read some of the little titbits of information left lying around, you’ll find yourself hooked by the frequent twists and surprise changes in direction. Interesting, intertwining and intricately woven stories and multiple, simultaneous narratives make for compelling gameplay and you’ll want to save and re-load an area just to try the different options that are available to you.

2011’s Deus Ex: Human Revolution was one of my all-time most hotly anticipated games (just behind any Metal Gear Solid sequel and just ahead of the SSX reboot) and it didn’t disappoint. The graphics are incredible, the story is solid and the levels are well-designed with the same feel as the original, to which there are plenty of tasteful, subtle nods. Sure, as you probably read when it launched, the boss battles are a little staid, but they are far from numerous and the director’s cut of the game improved them anyway. If you don’t fancy playing the original, I usually don’t advise picking up the later editions, but this is a rare case where Human Revolution does enough to deserve your attention as well.

“The fun is to be had in discussing how you completed an area. That first section, on Liberty Island, how did your friend get inside? Was it better than your method? Why? That’s the sign of a great game”

Ultimately, if you’re a gamer and you haven’t played Deus Ex, you owe it to yourself to see what you’ve missed out on for all of these years and to see where some of your favourite games got their ideas from. Maybe the graphics haven’t held up all that well but it’s the care and attention that went into the game that make it what it is, and what it is, is the pinnacle of the FPS genre. It’s also a Game That Changed Our Lives.