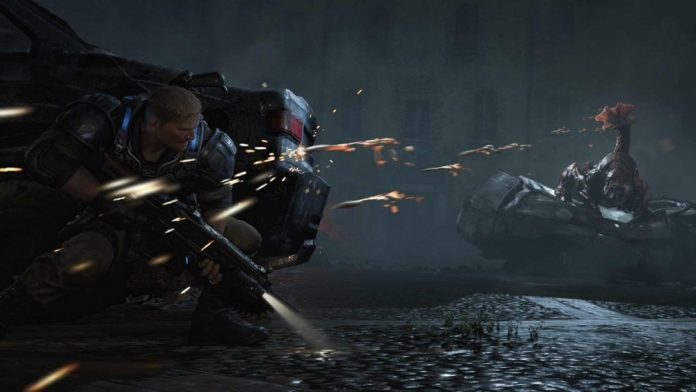 Over at GameInformer’s ongoing coverage of Gears of War 4 they’ve revealed some exciting new screenshots giving us our first glimpse of the beauty and brutality that’ll feature in the franchise’s long awaited return.


I was initially anxious about Gears of War 4. The gameplay footage at E3 was pretty ordinary, prompting me to reinforce my belief that the franchise had come to an end and should stay that way. Secretly in my head though, I’ve been thirsting for more on Gears of War 4 , hoping that some footage could reinvigorate my love for the franchise. Whilst it’s still a little too early to say, these new screenshots have instilled some hope. They seem to have listened to feedback, paying attention to the fans and bringing back the survival-horror themes that pervaded the first Gears. The vibrant colour palette of Gears of War 3 has been replaced with a much darker, moody scheme. Not to say that it isn’t beautiful; it is. But in my opinion, it’s also a sure sign that they’re steering the franchise back in the right direction. To me, they began to lose sight of what made Gears, Gears. It gradually began to morph into a globe-trotting, ass-kicking adventure which dropped suspense for triple A, blockbuster moments. Remember that moment when you come face to face with a Berserker for the first time as it crashes through the wall? Or maybe when you’re investigating the unnerving Wretch infested facility? What about the tense driving section where you fend off the Krill as they swarm at you from the darkness? The first (and even the second) had action, but also had a certain atmosphere that made them a distinct blend of action-horror with mysterious story and dry humour. It didn’t need enormous explosions and lots of shouting over gunfire to be memorable, as some of the pace changes proved to be the most engaging. They not only need to recapture this formula, but also expand upon it to chainsaw through some new boundaries. Forget the need for monumental scale and focus on quality in intense, unique sequences. Who knows if they’ve actually done away with ‘ass-whoopin’, but from the screenshots it looks like we’re in for a deeper, darker treat.

All of the information you see on this article will have stemmed from this coverage over at GameInformer. It provides a great deal of exclusive info on Gears of War 4 as they got their lucky mitts on a playable section of the game and came away with a bunch of new details to boot.

Gears of War 4 is set to release sometime in 2016 for Xbox One and potentially PC. As always, stay tuned to GameSpew for the latest.