“Kel’Thuzad and Rafaam are competing to see who the superior endboss is! Take a side and battle for evil supremacy!” It’s the Tavern Brawl for 23-28 March, An Evil Exchange.

I love these kinds of Tavern Brawls: pre-made, new heroes to play as, and new cards – overpowered ones at that. It’s an interesting one this week, an entirely new one, with cards and characters specific to this Tavern Brawl. Players take on the role of either Kel’Thuzad or Rafaam, which is randomly selected at the start of the match. Both have their own hero powers as well as unique cards. 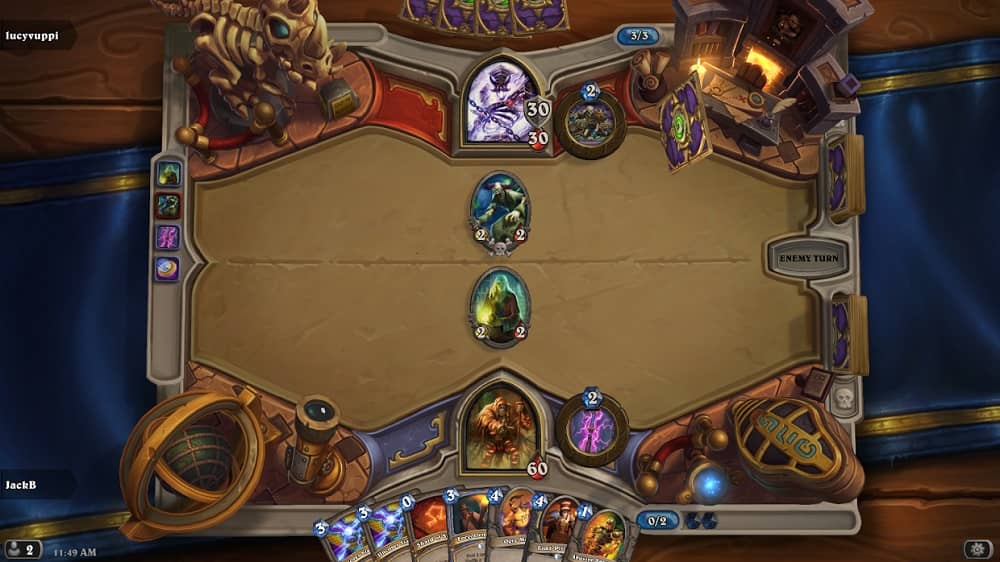 This was one of the longest and most interesting matches I’ve played in the Tavern Brawl. The latter because both heroes have 60 hit points to take down, but this Tavern Brawl really benefits from that. I did lose, however. I played as Rafaam, and spent too long trying to get his hero power to its maximum strength. To do this, Rafaam has a three cost spell card to build up his staff with the most powerful hero power; adding a legendary minion to your hand that will cost four less. While doing that, Kel’Thuzad had set up good enough board control that the rest of the match was me consistently on the defence. I made some nice plays, as did my opponent, but ultimately I made mistakes that cost me the match. During the match, the hero powers were really important, especially for Kel’Thuzad, who as a mage had racked up enough secrets that most of my turns were nullified by them. Kel’Thuzad’s hero power allows him to bring back a random friendly minion. This kept bringing back really good minions that I thought I’d dealt with already, ones that kept reinforcing my opponents board control. Throughout the match, though, I was trying these cards out and without much attention to winning at the start.

A problem with Tavern Brawls like this is that one of the characters could be objectively more powerful with better cards than the opposition, but here I don’t think that’s the case. Rafaam does have cards to counter board control from Kel’Thuzad – most notably Flamestrike – and with a fully upgraded hero power he can damage Kel’Thuzad very quickly. A great Tavern Brawl for new players and veterans alike, fun and engaging with enough useful cards that you almost use your allotted turn time as there are many different plays you could make. I recorded this as well; watched it back and facepalmed an infinite amount of times at my own plays. You don’t want to see that!

I’m off to keep playing this Tavern Brawl, and probably keep losing, but, there are lots of interesting cards and plays to be made here as well as the desire to play both characters. I’ll see you at the Tavern.

What about you? Were you Kel’Thuzad or Rafaam? Did you win? Let us know in the comments below!