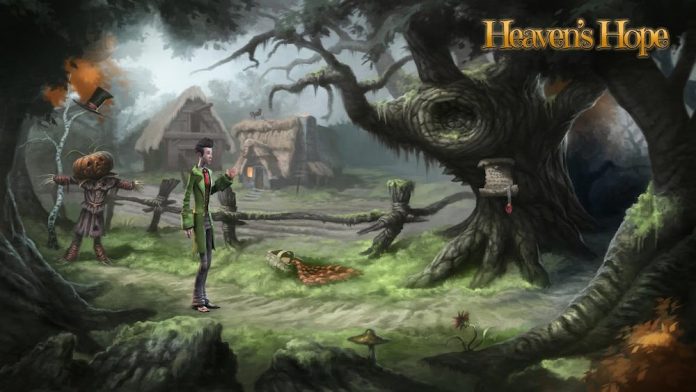 Some of my favourite ever games are point and click adventures.

Unfortunately, since the golden age of LucasArts and Revolution (and, arguably, Sierra) ended in the early 2000s, no-one has made a really great point and click game. That hasn’t stopped German studio, Mosaic Mask, from having a go with Heaven’s Hope, though.

Heaven’s Hope is immediately recognisable to anyone who’s ever played a point and click adventure. You control fallen angel Talorel, using your wing-shaped pointer to highlight areas of interest and then choose an action to perform from a predetermined set of verbs (in this case indicated by little hovering icons) like “talk to”, “pick up” or “use magic angel breath on”. While preparing for his Aviator’s exam, protagonist Talorel is challenged by another angel, Umorel, to perform a dangerous stunt and, inevitably, falls from heaven – right into the titular town of Heaven’s Hope. The town is currently under the thumb of an over zealous nun who has brought her own bat-poo crazy version of the Inquisition to 19th century rural England, with all the Monty Python jokes that implies. Your quest is to retrieve your halo and find some way of getting back to heaven. Easy, right? Not quite.

Your way back through the pearly gates is blocked by (amongst other things): the insane nun, Greta; a mad scientist whose flying machine has been dismantled; a demon-possessed goat and an alarming array of circumstances. It’s those circumstances that are the point and click adventure’s stock in trade. Developers have got to conspire to give their audience puzzles to solve and that often means that you find situations cropping up that, outside of a puzzle game or TV soap opera, would seem quite ludicrous. Heaven’s Hope does an admirable job of setting up those circumstances, but unfortunately some of them still feel rather contrived and incredibly unlikely. That’s not helped by the fact that Heaven’s Hope falls into a trap that a lot of other point and click adventures also fall into: giving us access to objects, locations and – sometimes – characters that we really won’t need to deal with until much, much later. 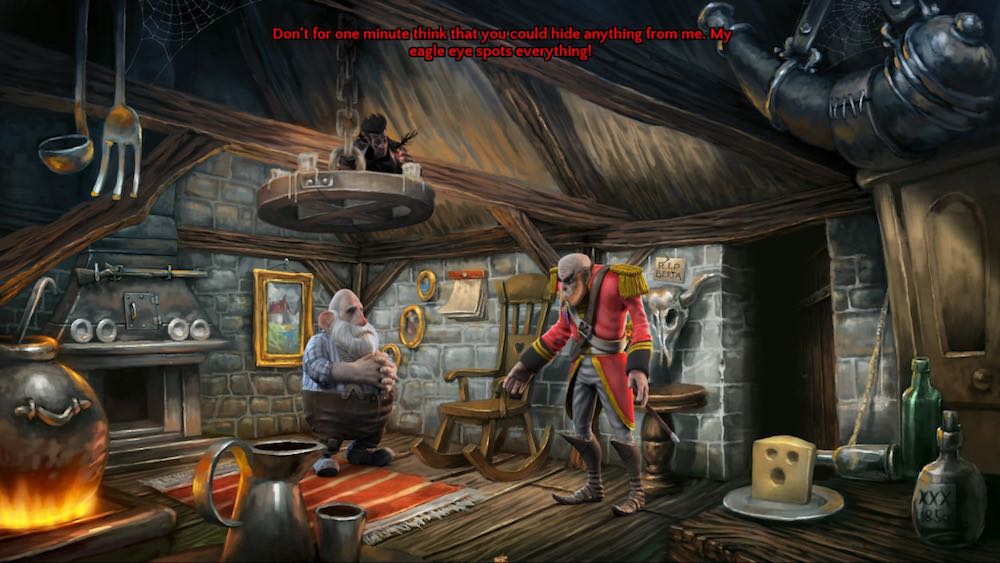 These sort of moments can either ruin carefully set up puzzles (in that you already know how to solve it before it presents itself) or can make potentially simple puzzles much more difficult because you’ve forgotten about the rubber chicken that’s been stashed in your pocket/backpack/dog’s arse since the beginning of the game. The early reveal dialogue can also be troublesome but in a different way: if the conversations have been set up in quite a linear fashion and you manage to break that chain, you’re going to be talking to someone about something that you’ve not discovered yet or revealing information that you didn’t think you had. Fortunately, these instances are rare in Heaven’s Hope (providing you don’t go too far off the beaten track) but it’s not entirely devoid of them.

What Heaven’s Hope has in spades, however, are pop culture references. I couldn’t have counted the amount of times I came across references to Monty Python (the Inquisition gags, obviously), Discworld, The Hitchhiker’s Guide to the Galaxy and Ghostbusters. This last franchise gets more gags than the others put together, though, with items such as a PKE meter, a book about Gozer and Zuul and some choice pieces of dialogue. I don’t mind send-ups or the occasional nodding reference but Heaven’s Hope doesn’t as much lampoon its inspirations as it does lift sections from them wholesale, even though they don’t quite fit with the world Mosaic Mask Studios have tried to create.

It’s a pretty confused world, too. Not just becasuse of the incessant pop-culture references but because the game seems to change its mind about how the world works quite regularly. A great example of this is in the shared knowledge of Talorel and his two angelic helpers (still in heaven and appearing in visions); in one early section Talorel is shocked by a certain smell – his helpers tell him that it’s something called “food” and that humans eat it (“humans” – we’ll get to that). The next second, you can instruct Talorel to examine some cheese and he tells us that “…cheese is always useful…”, despite having only just been told what “food” is. I mentioned “humans” (the quotation marks are valid) a second ago – that’s how the angels refer to us. Maybe it’s a quirk of the translation but, the last time I checked, angels weren’t considered to be aliens so their constantly referring to us as “humans” as opposed to “mortals” is incredibly confusing. 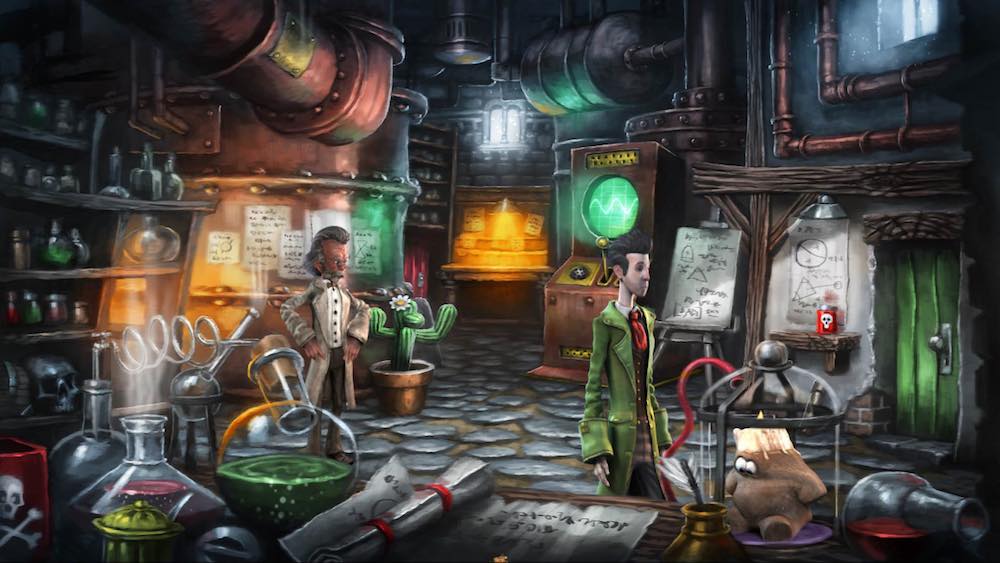 I’ve been a little (okay, a LOT) down on Heaven’s Hope so far but it does have a number of redeeming qualities. It’s a great looking game (for the most part), with graphics that sit somewhere between water colour, caricature and stop-motiony 2.5D. The environments are well crafted and there’s plenty to take in. The character models are great and rather varied – though it often feels like they shouldn’t all be in the same game together. The game’s audio is also good, despite some occasionally ropey voice acting and a weird “splat” sound when you use some items. It really comes alive in some of its trickier or less obvious puzzles – you don’t feel as though all you’re doing is rubbing an array of items against each other in the vain hope that something will work: most of the puzzles seem logical (for a point and click game, at least) and you’ll use all of your items at least once.

Two of those items are an absolute joy that you’ll be sad to leave behind at the end of the game: a mouse that Talorel rescues from death and a very cute homunculus that you’ll have to create at some point who both prove more useful even than Talorel himself. Unfortunately, the main character, of all of the characters, is the least interesting. He’s not relateable in any way (unlike Guybrush, Manny Calavera or, even Green Tentacle) and comes across as being one of the dullest and stupidest beings on earth and in heaven. We’re never really given the chance to get to know him, either, and he’s as much of an enigma at the end of the game as he is right at the start. I still don’t know what an Aviator’s exam (in this context) is.

Heaven’s Hope, then, isn’t the incredible new point and click adventure you’ve been waiting for. In fact, when you get right down to it, it’s an incredibly mediocre offering that tries but ultimately fails to revitalise the struggling genre. I’ve used the word “unfortunate” a lot in this review – that’s not just my go-to mood-flipping word, I’ve used it intentionally. It really is unfortunate that this game isn’t better and I really wanted to like it. You can see the love that Mosaic Mask have piled into it and, in some respects, it definitely pays off. But the great puzzles and some endearing characters (notably the two who can’t talk) don’t quite make up for the boring Talorel, the confused world or the fact that the writers were too busy stealing other peoples’ jokes than trying to create more of their own.

Heaven’s Hope is available on PC.