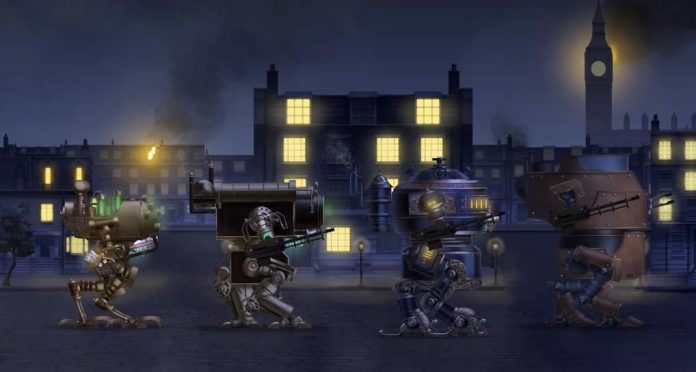 Well, Ironcast certainly sounds interesting – and for the most part, it is. However, treating this as a bog-standard match -three puzzler will only lead to disappointment. While on the surface it may look little more than a casual match 3 game with giant mechs thrown in for the fun of it, below lies much more depth, management and strategy than would be expected.

Looking at screenshots for Ironcast you would be forgiven for immediately jumping in and matching the green boxes to the green and purple to purple – but you would also have your mech quickly blown up. Set in the late 1800s, the English are engaged in a lifelong battle with the French and a recent technological advancement has created the Ironcasts – powerful, human-controlled machines that are sure to turn the tide of the war. But this is a long time ago and machines need many things to run: energy for shields and movement, ammo for weapons, coolant to stop overheating, scrap to upgrade your mech and repair to… well… repair.

When fighting enemy Ironcasts (or the sturdier Steamtanks) you only get three matches per turn. Unlike most match three games this is not a game of making as many matches as possible, but one of resource management and planning. Are the enemy shields down? Collect lots of ammunition nodes and fire with one of your two weapons. Is the enemy about to be destroyed and you want some more currency to spend in the workshop? Collect the leftover scrap lying in your matching pool. Is the enemy building up for a large attack? Collect energy nodes to activate your protecting shield and move faster allowing yourself to evade attacks. But be careful; nearly every action your mech takes heats it up and you will need to collect coolant to stop overheating. While attacking, you can target a specific area of the enemy – their drives if they are too evasive or weapons if particularly damaging – but they can do the same to you, meaning you will always have to make sure you have enough repair nodes in reserve to fix any damaged areas. 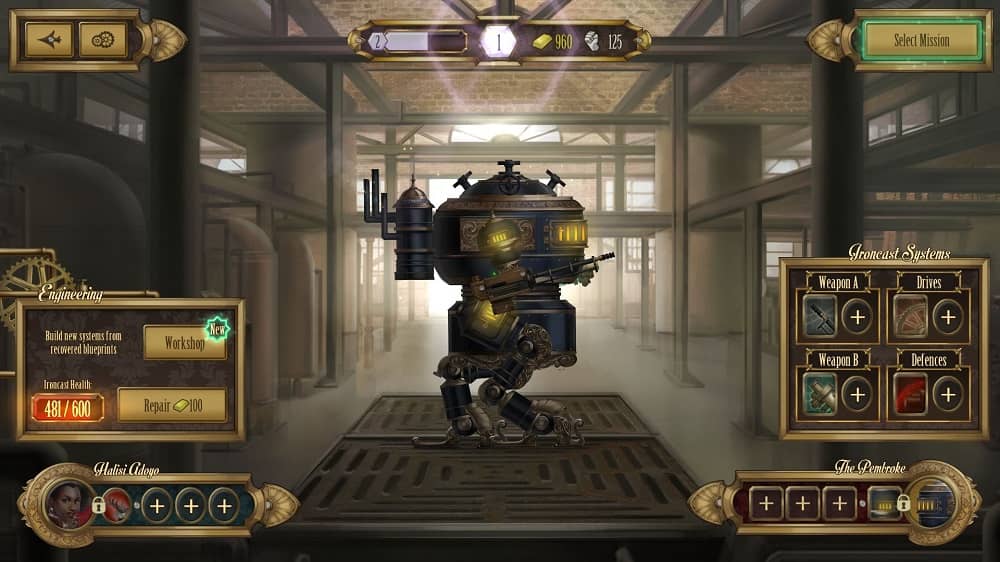 Thinking ahead is crucial, both to make longer matches to collect morenodes and experience, and to make sure you don’t suddenly overheat or become impossible to repair. Just to make make things that little bit worse, permadeath is on, so if you are destroyed it’s game over, and back to square one. Starting from scratch can be frustrating, but your performance in each gameearns you “commendation tokens”, which you can spend on new drivers, mechs, general upgrades and more items and augments that will become permanent for each subsequent playthrough. In between missions and battles you return to the workshop where you can spend your collected scrap on upgrades and new items such as weapons, defences or augments as well as to repair any damage taken. Every fight earns you XP, and every time you gain an experience level you get the choice of one of three abilities or mech augments.

Ironcast presents many player choices in an attempt to make each playthrough unique, although in reality they make relatively little difference to the overall gameplay. While it is a balancing act on whether you should spend your hard-earned scrap on this or that, most of the items you acquire are just straight damage or shield upgrades rather than offering more unique choices. Again, this is prevalent in the mission layout system. Each campaign consists of nine days (nine missions) and each day offers you one of three missions to take. Some may pay a little more, others may be more difficult and some may ask you to fulfil a specific task such as avoid damaging the enemy’s shield, or solely attack their weapon, but most just amount to “Kill the Ironcast/Steamtank within X turns”. There are rarely other types of missions such as negotiations or supply-run missions but even supply-runs consist merely of not dying while collecting a special type of node. 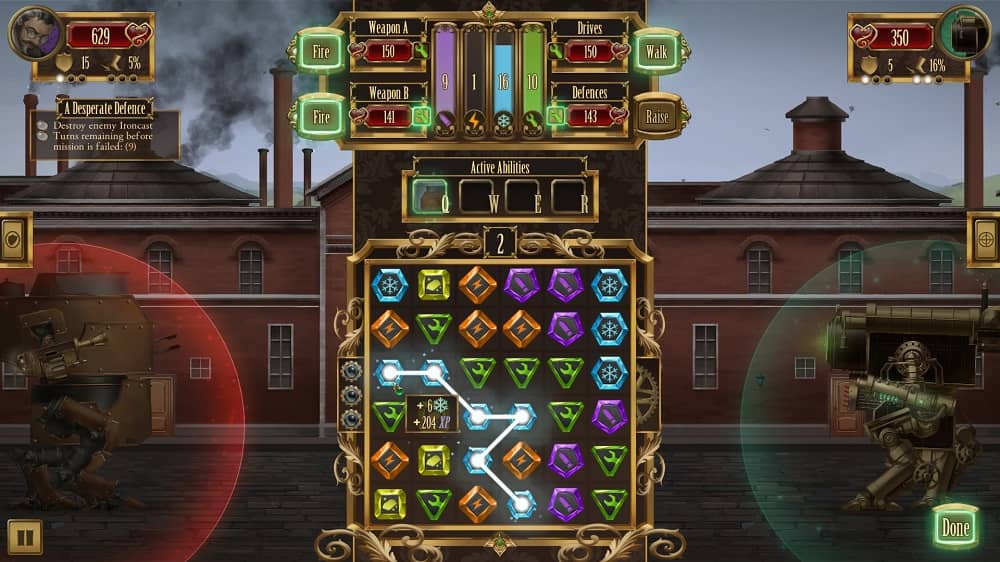 Quickly into playing Ironcast you will realise there is much more depth and choice than initially expected, but keep playing and you may find that depth and strategy isn’t actually all that engaging. Most fights end up coming down to wishing you had more ammo and coolant available to make a match with, and the inevitable permadeath of your mech becomes more an annoyance as you lose any progression and hard work you put into planning your build. I did also face problems with bits of text and description not fitting on the screen, making them impossible to read. I don’t face this problem on any other game and even after changing multiple settings on my TV and PlayStation nothing seemed to work. While it is (mostly) possible to view descriptions of items in another menu it required extra work and while may not be a problem for all, could frustrate some.

Some may love the unexpected strategy and depth that Ironcast provides behind a sleek match three exterior. Others however may find that unlucky RNG and the too often loss of progression from permadeath begins to deteriorate any sense of achievement or progress being made. Personally, I feel that Dreadbit should have excluded any roguelite features to make for a more compelling and engaging experience. That said, for those who stick around and enjoy the strategy that Ironcast offers, it can be an addictive and enjoyable experience.

Ironcast is available on PS4, Xbox One and PC. We reviewed the PS4 version.