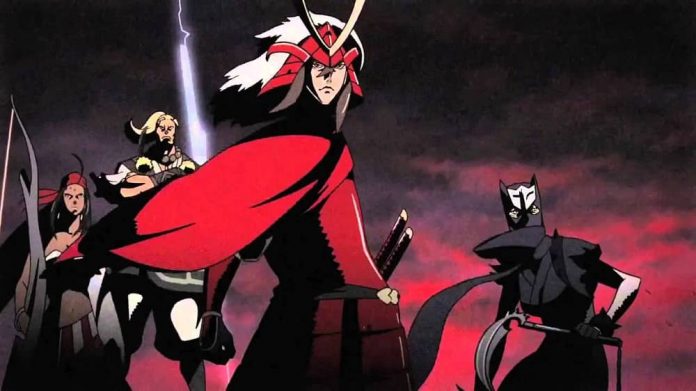 There was a point with Sadame where I put it down and declared I was done with it, mainly because of its ridiculous difficulty spike towards the end, and its annoyingly convoluted systems. However, I forced myself to pick it back up just to see if I could finish it for the sake of this review. My nightmare is finally over.

Sadame is a Japanese action-RPG originally released in Japan in 2014, developed by Mebius and published by Intergrow, brought to the West by Rising Star Games. The story to Sadame is… er… well, West Japan has been infected with evil Karma and been taken over by Nobunaga, and your quest is to take him down and restore balance to Karma. I think. Or something along those lines – I can’t quite be sure. The poor attempt to convey the story isn’t the first problem with Sadame, either. If you’ve seen any promotional material for Sadame, you might have seen some really good looking anime-like animated sequences. Well, they aren’t in the game. There’s no 3D compatibility either, which for a 3DS game (come on, the clue is in its title) is quite a poor offering.

There are four character classes you can play as in Sadame, each having their own story that attempts to explain, through dialogue, why they’ve come to West Japan to take on Nobunaga. One character had been told of this place by their grandfather, whereas another was here because their sister had been taken. Each class does feel different; the Ninja, Monk, Samurai and Rogue all have their own weapon type and a different set of spells. Personally, I found some classes to be more fun to play as than others, but this will depend on your individual preferences – there’s a class to suit everyone’s preferred playstyle.

Despite the lack of animated sequences shown off in the advertisement for the game, the art style and enemy design in Sadame is great and does a good job at fitting the overall aesthetic. However, enemy design gets a bit dull towards the end; enemies are no longer the interesting flying skulls or spiders with faces on them that you face in earlier battles, but instead are replaced with metal mecha soldiers with miniguns which, for me, felt unremarkable in comparison. The sprites are all well-designed, as are the characters you play and interact with, and the environments that you visit all look good. It’s such a shame that the rest of Sadame lets its commendable art design down.

Playing Sadame left me feeling consistently underwhelmed, confused and annoyed almost from the moment I hit “start”. Right at the beginning, the game presents you with blocks of text that I suppose tell the backstory, only the paragraphs fade in and out so quickly that I didn’t have time to read them, leaving me completely lost. Unfortunately, this continues to happen throughout the game every time there is some backstory or recap to tell.

There are way too many stats in Sadame – enough to make the Dark Souls series blush. Let’s say I wanted to add some stun resist and strength. Well, to begin with, there are two different “Stun%” stats: one that’s labelled “chance to inflict stun when dealing earth damage”, and another that says “rate at which the earth effect stun will occur”. It gets worse. There’s also “StunSTR”, “StunRES”, “StunRES%”, “StunRES+” and “StunSTR+”. Confused yet? StunRES is “resistance to stun. A higher value means a better chance to nullify stun”, StunRES% is, “boosts stun resistance”, and StunRES+ is, “increases stun resistance”. Why are there three separate stats that all do the same thing?! It’s the same with StunSTR and StunSTR+. Those different stat variants also appear for Knockback, Burn, Shock, Dull, Raze, Impair, Hex, and Poison, some also including DMG and DMG+ as well. Altogether, they make for an extremely baffling stats system; I look at all these numbers and wonder whether 33 StunSTR+ is good, or 68 stunRES+ is better – who knows? There are far too many stats shoved into Sadame for them to have any real meaning; it’s completely overwrought and unnecessarily confusing.

On top of the stats, the way gear and inventory is handled is convoluted, worsened by the amount of loot you acquire. Gear is split into your usual RPG rarity levels: Common, Uncommon, Epic and Legend (all helpfully color-coded into greys, greens, blues, and purples). Legends have the most added stats attached, a hodge-podge of random numbers. All of your collected loot is shared across all characters and the max inventory is a generous 500 slots, so if I picked up a nice piece of armour for another class then great, I could just switch over and put it on. The problem here is the inventory management is a giant pain: there’s no option to sort or filter by class, so with a potential 500 objects to go through, you have to sit there for a good hour working out what you want to sell and what you want to keep. As Sadame is likened to Diablo in terms of loot, you’ll fill up those 500 slots relatively quickly.

Away from its overly complex stat options and laborious inventory system, the actual gameplay of Sadame is surprisingly easy. Much of your time playing the game tends to be pressing one button over and over again. The first level is a bit of a breeze, which is fine as it gives you chance to get used to your character. The first boss fight you encounter is also easy, with simple tactics to follow, but it takes a good number of hits to go down. On the second level, I was doing barely any damage to the boss and died from one of his abilities. At that point, I thought I had a tough game on my hands here, and the boss fights would be difficult. However, on that run I got a new weapon, equipped it, one-hit-killed all the enemies leading up to the boss, and then killed the boss in about five hits. Perhaps I was just lucky in that I found a weapon with excellent stats, but considering this continued to happen throughout most of the game, it seems more like a design flaw; whether it be overpowered weapons or too weak enemies. It’s almost a shame to come face to face with a very well-designed boss, yet kill it in a matter of seconds. To make it even easier, you can bring along one of your other characters to assist, which meant I could just stand back and watch my computer-controlled companion obliterate everything in sight. Having my higher level character fight by my side meant that boss fights ended before the boss even had chance to take a swing at me.

For the majority of the game, the difficulty continues to be a non-existent challenge. Then there’s act 4-4; the last level. Suddenly everything is turned up to 11: enemies now hit like trucks, have mini-guns, take 80% of your health with one hit, and the screen is constantly invaded by them. Everything takes a good few hits now, and if the spawning of the next wave of enemies isn’t kind, you’re flat out dead. There are mobs that freeze you, rendering you unable to move whilst everyone else around you whacks you until you’re dead. It’s so jarring that Sadame suddenly becomes what feels like impossible, after breezing through the first three acts of the game. However, I eventually found an extremely good weapon which allowed me to one shot these enemies again. Ultimately, your success of the game is solely dependent on how lucky you are with random loot drops; the items you find will determine whether the game is too easy or soul-crushingly hard.

Aside from melee weapons, Sadame also offers magic damage in the form of spells, but I found these to be rather useless for the most part. Whenever I tried to use a spell, it either missed because it’s a guessing game where it will land, or it didn’t do enough damage to ever be worth using over melee attacks. However, the practicality of magic depends on what class of character you’re using: the Rogue class, for instance, has useful passive buffs that give extra chance of special effects and can raise defence against physical damage for all allies. There are also Karma spells that can either damage an entire wave of enemies at once, heal you, or make you briefly immune to damage. I tended to heal when I needed it and that was about it for Karma spells; they’re fun to try out, but for me, running in and meleeing was always the most efficient way of dealing with enemies.

After you complete Sadame, you can start again from the beginning to play through on a harder difficulty. This adds plenty of replayability to the game, but for me, I have absolutely no desire to jump back in. Sadame‘s brilliant art design is let down by the convoluted and confusing mess of its menus and inventory system. Not only that, but the randomness of its difficulty, the occasionally wonky translation and unintelligible story make it an overall tedious affair. If you get a big kick of out having pages of stats to micro-manage, or finding a lot of loot, then you may gleam some enjoyment out of of playing Sadame, but for me, I appreciate its art and its classes, and that’s unfortunately all I can commend.

Sadame is available on 3DS.