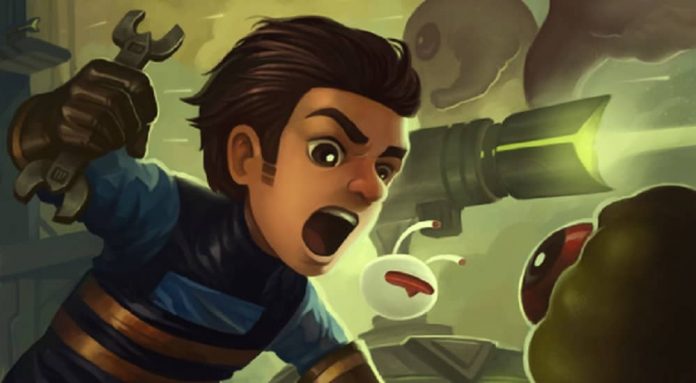 I knew I had to get my hands on Spacejacked when I saw that it was a pixel art tower-defence game.

The fact that it’s set in space was simply a plus. It won me over almost instantly with its funny tutorial, and kept me hooked for some time… that is, until it became so difficult I thought my head might explode.

Great Scott! Your ship is being attacked by aliens, aliens, and even more aliens! Even worse, the aliens have kidnapped your crew! Spacejacked is an interesting, funny, and unique take on the very popular tower-defence genre, with much more to it than meets the eye. Rather than protecting your base at point A from monsters at point B, like many tower-defense games, Spacejacked features game mechanics that have the player hopping all over their spaceship, creating a much more difficult experience.

In Spacejacked, you play as Dave, a new Spaceship Technician on an unnamed spaceship. Your job is to protect the ship’s three engine cores from any attacks. In order to do this, you are given metal which is used to build and upgrade turrets on specific spots in each room of the ship. During alien attacks, the player must teleport from room to room, building turrets and using Dave’s blaster gun to keep the cores safe from the aliens who will make a beeline towards them.

I found the beginning of Spacejacked very easy. The tutorial is fun and simple, introducing the player to the turret system as well as Dave’s blaster gun – which shoots fast at first, but loses power quickly and then slows down. It also shows the player how Dave’s gravity suit works. The suit changes the player’s centre of gravity, allowing Dave to walk along the ceiling. This lets Dave place turrets wherever he wants all around the room. After all, no place on the ship is safe from aliens, so you need to be able to get to those hard to reach places. 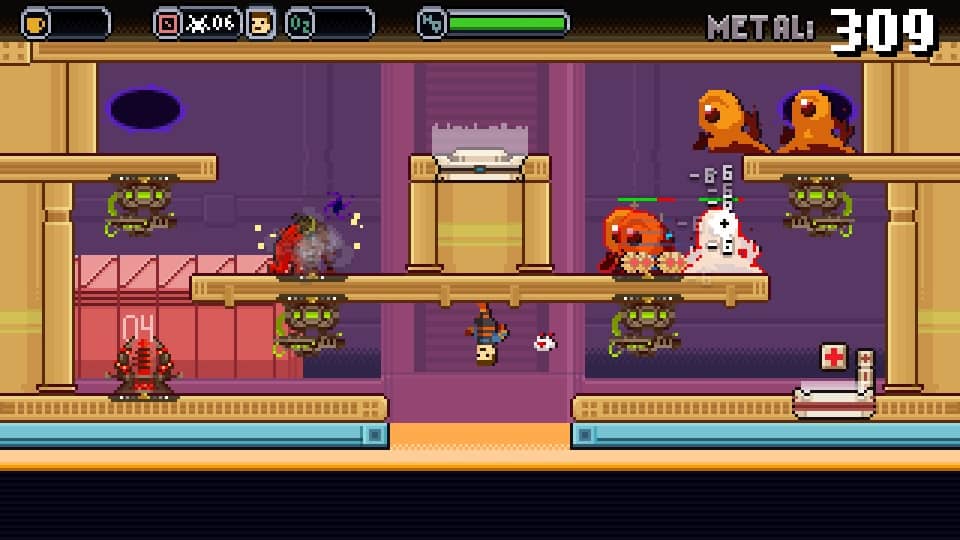 After the quick tutorial, Dave is introduced to the rest of the crew before going to bed and waking up for his second day on the job. On his second day, the ship is suddenly attacked by aliens and all of the crew members are kidnapped. Bother! It is then your job to not only protect the ship from alien attacks, but to find and rescue your crew members as well. This becomes Dave’s main goal of the game. Each day there is a new attack, each one harder than the next. You are allotted a certain amount of metal per day to start with, and you can use this to place your turrets throughout the three levels/rooms. You can also sell turrets that you built on previous days and use that metal in other rooms. Aliens will come into each room using purple portals that open up right before they start pouring out. The player is given only about 20 seconds to prepare between each wave, and these portals give an indication of where Dave’s turrets should be set up. At the end of the level once every alien is killed, you are able to rescue one of your crew members. I quickly learned the controls and strategies of Spacejacked and it felt much too easy.

That was before I got to day four.

On days one through three you have to defend a single core at a time. If the aliens are attacking the medical bay, then Dave is defending the medical bay. If they’re attacking the engine room, then you’re defending the engine room. You’re even allowed some time in between each wave to move turrets around and repair the cores if they were damaged. By day four, there can be two cores being attacked at the same time that you have to defend. You are only given a certain amount of metal, keep in mind, so this soon becomes extremely difficult. Strategy, quick thinking and patience are all key; unfortunately for me, all characteristics that I lack.

It wasn’t long before I realised how challenging Spacejacked is. I went into it thinking that it would be a lighthearted, fun, yet fast-paced game to play casually when I’m feeling like something easy. I never thought that in a matter of minutes it would become the one and only thing that fueled the hate fire within me. More than once, I found myself squeezing my controller a little too hard and inevitably giving myself early-onset carpal tunnel syndrome. I’d be lying if I said that I hadn’t looked up at the sky and prayed to the gods of the old world and new to kill me on the spot. This game is not kidding around. The only saving grace between these horribly difficult levels is the mini game that you can play to collect some extra metal. The player controls a tiny space pod and has to shoot aliens, reminiscent of the classic Galaga, but from right to left instead of the other way around. All of the metal you collect goes into your pack for you to use at the beginning of the next level. I absolutely loved this little feature, as it gives a nice, pleasant break from the ridiculous mayhem of the story mode. 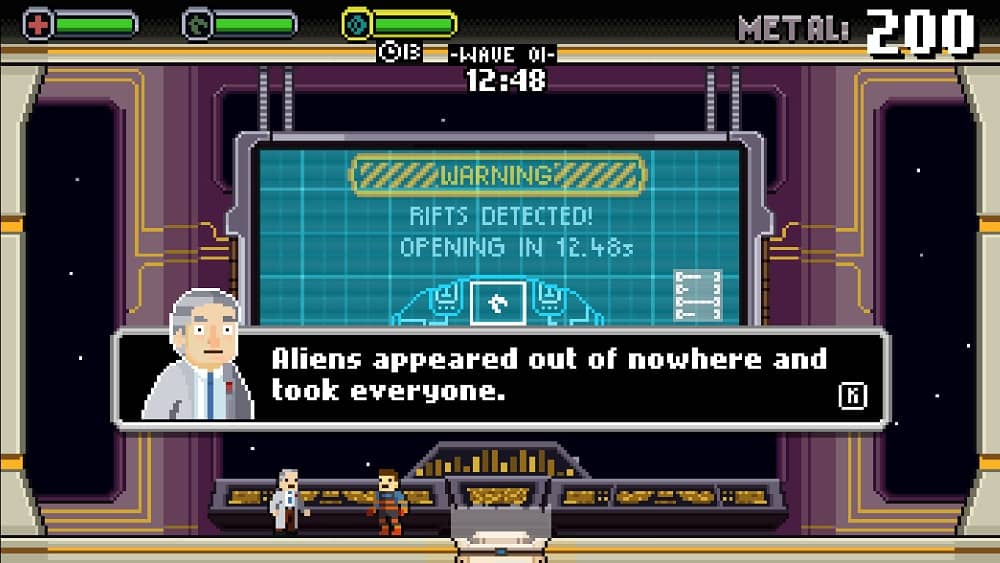 Spacejacked makes a very good first impression that lulls the player into a false sense of security. It doesn’t take long for Spacejacked to turn you into Gollum lying awake at night, crouched over your computer, because you’re convinced you can finally beat the level you’ve been stuck on. Who cares if you have work in the morning? Beating this precioussssss game is the only thing that matters, right? If you do happen to get stuck but don’t want to stop playing, the game also features unlockable endless and challenge modes. In endless mode, there is no time limit and endless waves of enemies with the goal of seeing how long you can last. In challenge mode, you’re given different challenges to try such as the “no blaster” level, where Dave is only allowed to use turrets to defend the ship from aliens.

Despite its cruel difficulty, Spacejacked is a really fun and entertaining game that will probably have me crawling back to it in shame again and again. Its hilarious dialogue had me in stitches on more than one occasion, and the gravity suit mechanic really adds a creative element that I’ve never seen before in the tower defence games that I’ve played. If you’re looking for a fast-paced and challenging game that will not only give you hours of entertainment, but will also make you question what you’re doing with your life, Spacejacked is probably the perfect fit for you.

Spacejacked is available on PC.