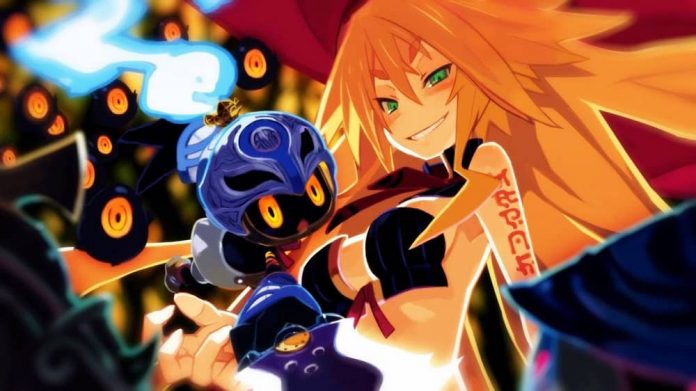 Fed up of always being the good guy in RPGs? Sometimes their over-enthusiasm to do “the right thing” leads to an overbearing sense of misplaced righteousness and ego-stroking, doesn’t it?

Well you’re in luck, because if you missed it when it was released on PS3 a couple of years ago, Nippon Ichi Software’s The Witch and the Hundred Knight allows you to be the bad guy for a change, and it’s now available all spruced up for the PS4.

Putting you in control of the titular Hundred Knight that has been summoned by the swamp witch Metallia, The Witch and the Hundred Knight: Revival Edition has you traversing a wide range of levels doing the nefarious witch’s bidding. Whilst the Hundred Knight is assuredly not on the right side of the tracks morally, gleefully carrying out any dark deed his master tells him too, it’s the swamp witch herself that is truly the monster of the game. Straight from the off Metallia is outed as a foul-mouthed, devious and cruel being, but for some reason it’s hard to not like her. If nothing else, Metallia’s crudeness and hostility adds a great deal of unique charm to the game, and also facilitates your ability to terrorise any townsfolk you encounter on your travels if you so wish, even going so far as to raid their homes. For all her bluster however, Metallia either can’t or won’t take a single step out of her beloved swampy domain, resulting in your main task of locating and beating up tree-like pillars until they bloom, spewing putrid swamp juice that increases Metallia’s influence and allows her to physically travel further afield. Of course, that’s not all you’ll be doing though, as there are countless other escapades along the way that require your personal violent touch, but you will be spending most of your time seeking pillars and their protectors to progress the story. 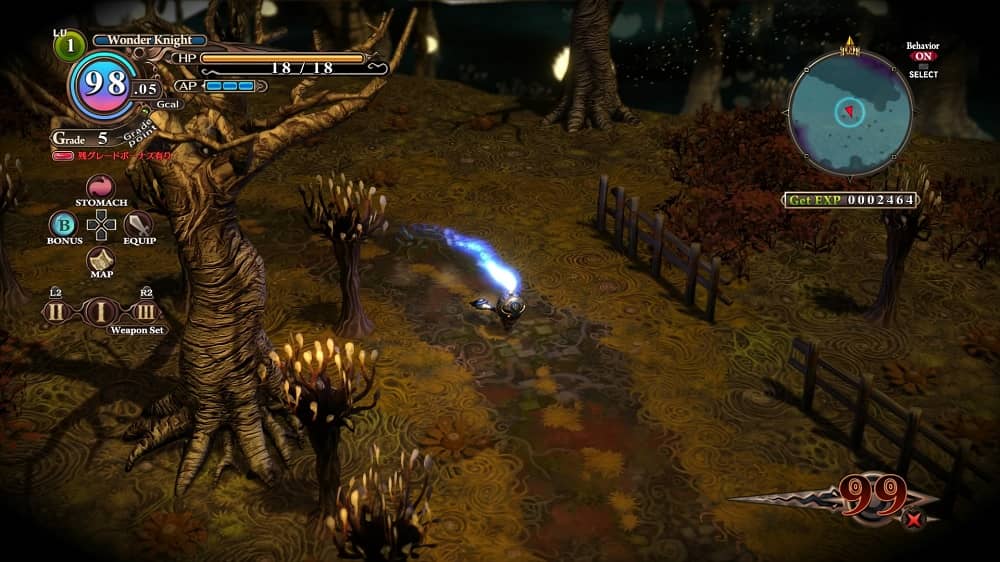 The Witch and the Hundred Knight is very much a linear game, but you are able to backtrack and visit previous levels in order to explore previously inaccessible areas or simply sightsee. Each level follows the typical template of exploration, combat, and light puzzle solving, with a boss thrown in at the end to punctuate proceedings. Whilst it follows a typical template however, The Witch and the Hundred Knight can hardly be described as generic or uninteresting due to its myriad of unique and quirky gameplay features. Combat for instance, has you attacking with up to five weapons in quick succession, the speed determined by weapon type and in which order they are equipped. To make matters even more complicated, you can have three sets of weapons equipped at the same time – that’s 15 weapons – and switch between them at the press of a button. You’ll need to do so too, as many enemies are impervious to certain weapon types while being highly susceptible to others, making how you choose to loadout your little knight a strategic affair. Do you go for a well-balanced main loadout capable of damaging all enemies to some degree with two lesser-used specialised loadouts in support for extreme circumstances? Or do you, like me, opt to have a loadout for each attack type – slash, blunt and magic – switching between each constantly for maximum efficiency?

When attacking with your equipped weapons isn’t enough you’ve also got an AP-consuming special attack and numerous skills called “Tochkas” to fall back upon, as well as the ability to change your facet which alters your base stats to boost certain characteristics of your knight, but to be honest I rarely found these features useful. Essential though, is learning to negate or avoid attacks by guarding or performing a dodge, the latter of which becoming a Mystical Dodge when timed correctly, slowing down time and giving you a period of invulnerability as a reward. In times of sheer desperation or need you also have access to “Chaos Revelation” mode, which greatly boosts your combat abilities but comes at a grave price – it’ll quickly burn through your energy reserves called “GigaCalories” (Gcals) and then begin depleting your health until you meet your demise.

Managing your Gcals plays a large role in The Witch and the Hundred Knight: Revival Edition, with everything you do out in the levels consuming them to some degree. Exploring uncharted territory is one of the biggest drains on the resource; every foray into the unknown requires you to carefully manage your Gcals as running out will result in your health steadily depleting. To restore Gcals on the go you can either consume specific food items or devour weakened enemies, although the latter option will fill your temporary stomach inventory with garbage, limiting the number of items you can potentially loot. Alternatively, by finding small pillars and making them bloom whilst out on your travels you can exchange Grade Points earned by defeating enemies for a minor Gcal refill, but that means forgoing the opportunity to exchange them for lucrative temporary boosts to your stats. If you just don’t feel like you have enough Gcals to go on or want to save your game however, your last option is to use one of the smaller Pillars as a checkpoint, warping you back to the witch’s house and banking any experience and items acquired whilst fully replenishing your Gcals for the next adventure. 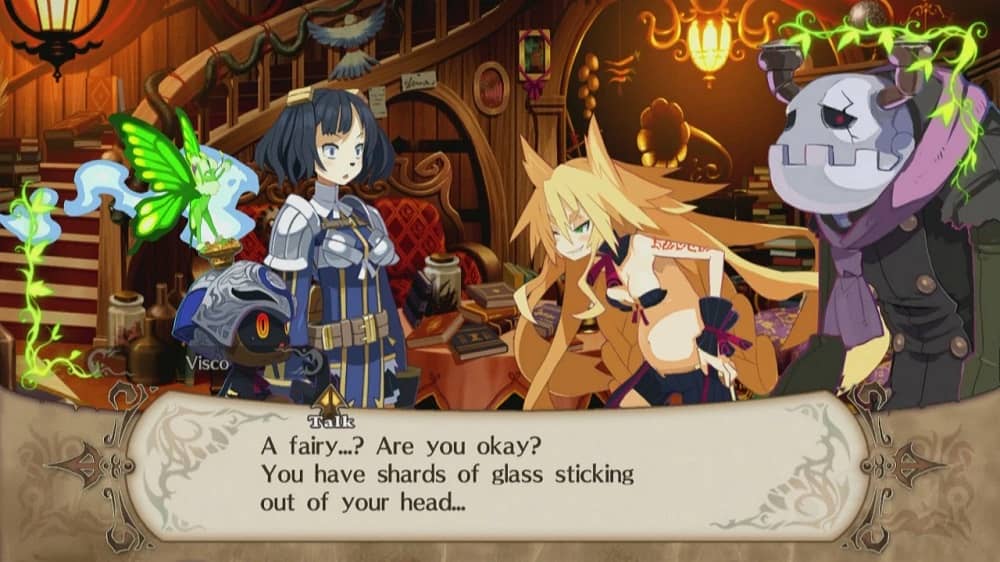 The Witch and the Hundred Knight’s system of only awarding experience points and items when you escape a level with your life intact makes for some interesting risk versus reward gameplay, with a Disgaea-like bonus gauge system that resets upon exiting the level rewarding extended bouts of exploration and combat. To be honest though, the risk just isn’t worth the reward in most cases, as missing out on your hard-earned experience points feels more crushing than not being awarded items that may or may not be that useful. Being thrown out of a level without any rewards is a fairly rare occasion too unless you’re really careless, as losing all of your health points when you have Gcals remaining will simply see you returning to your last activated checkpoint with the only penalty being the loss of some Gcals and maybe an item or two that you had looted. It’s only when you’ve ran out of Gcals with no prospect of recovering any that you need to worry, as losing all of your health under these circumstances will return you to the swamp witch’s house with no loot or experience earned, which of course isn’t ideal.

The combination of The Witch and the Hundred Knight‘s many gameplay features results in an experience with a considerable amount of depth that is also enjoyable to play, although it does have its issues. The graphics for example, whilst undoubtedly vastly improved over their PS3 counterpart, are still fairly lacklustre, and the camera is still very awkward at times, obscuring your view of the action no matter how you manipulate it. Perhaps The Witch and Hundred Knight: Revival Edition‘s biggest turn-off for many however will be its general lack of difficulty for the most part, although the addition of the seemingly never-ending Tower of Illusion which is new to this PS4 release is sure to keep avid players entertained and challenged for many hours after they’ve finished the main story. Likewise, the newly introduced Alchemy system which allows you to upgrade weapons to your heart’s content will also eat up a great deal of your time, but unfortunately the feature is not available until late into the game.

Overall then, The Witch and the Hundred Knight: Revival Edition is a great action-RPG with only a few issues that bring it down a peg or two. Whilst the large number of gameplay features it throws at you with little explanation is initially bewildering, with one or two missing the mark somewhat or being underplayed, they nonetheless allow for a deep and complex gaming experience that is quite unlike any other game in the genre. The game’s individuality is also bolstered by its premise of playing the villain for a change, although with him being mute except a few gestures and indecipherable squeaks, it’s left to the evil swamp witch Metallia to be the real star of the show, providing plenty of laughs with her dirty mouth and despicable deeds. For fans of action-RPGs, The Witch and the Hundred Knight: Revival Edition is an easy recommendation to make, and even those unfamiliar with the genre looking for something different may find it an engrossing experience if they don’t mind putting some effort in to fully comprehend all it has to offer.

The Witch and the Hundred Knight: Revival Edition is available on PS4.