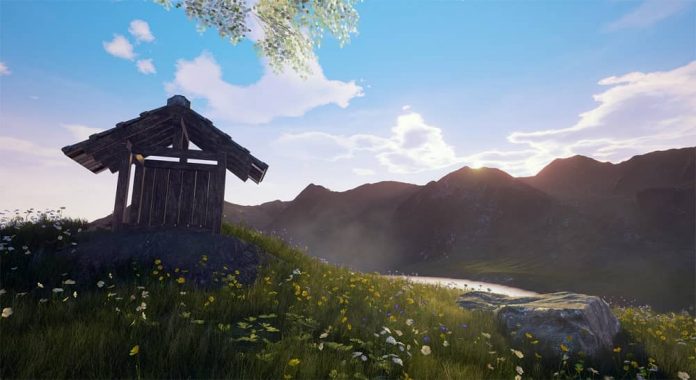 In the last few years, the rise of crowdfunded video games has been phenomenal.

It seems now almost every project, bar the very biggest AAA studio releases, is wanting a piece of the Kickstarter pie. For some developers, it’s a very easy process, and within mere hours of setting up their campaigns it’s clear their goals are going to be more than met. For others, however, their projects get overlooked by the mainstream, and regardless of how promising their games look, they’re unable to capture the attention of potential backers.

One such title recently caught my eye; Niten, an impressive-looking exploration game that is the work of Edinburgh-based Donald Macdonald. Whilst you couldn’t really get a more Scottish name even if you tried, Donald’s vision for Niten is far removed from his scotch roots and instead, he intends to take the player on a journey to a remote Japanese island. His Kickstarter lists Dear Esther and Gone Home as inspiration for his project; exploration will be key, and narrative will be revealed at the player’s own pace as they uncover more of the island. Donald has been single-handedly working on the game since June 2015, and as of yet, the premise seems something of an enigma, but one thing is for certain: this is one good-looking project. A single, minute-long trailer takes us on a journey through Donald’s recreation of a Japanese island and it really is a feast for the eyes. Impressive attention to detail and gorgeous, almost photo-realistic visuals are apparent in every scene; if these are in-game shots, then Niten really is something quite special.

It’s a shame, then, that with only 10 days left of its Kickstarter campaign, Niten has only reached a little over 20% of its goal – as of today, £3,500 has been pledged of the £15,000 that Donald has set for his project’s goal. It’s a bad sign; usually, if a campaign doesn’t gain traction in its first couple of days, it’s likely to sit fairly stagnant for the rest of its run time. For the sake of Donald, and for the sake of Niten though, I hope this isn’t the case in this instance. Niten clearly has a lot of potential; it just needs to be realised.

On speaking to Donald about Niten and his experience with Kickstarter so far, he explained to me that the biggest obstacle he’s faced has been converting traffic into backers. Before he’d launched the campaign, Niten had already received plenty of coverage on smaller sites – as well as a post by Unreal Engine on their own Facebook page – and people were starting to notice the game. Donald had a choice of waiting to continue building support via social media and external coverage – and potentially risk losing momentum – or strike whilst the kettle was hot and set up his campaign whilst Niten was being talked about. He chose the latter; people are viewing the campaign page every day, but not many are willing to pledge their support. Donald reckons this is largely due to the lack of experience on his part and the lack of gameplay demo he has to show off. It’s also a tricky game to successfully showcase due to its player-driven nature and focus on exploration. “Niten is anchored in a very niche genre,” he says, “so tapping into that fan base is tricky”. People are also more willing to place their money where there’s already a degree of trust – and since Donald is an entirely new face to the world of game development, potential backers are likely to be more sceptical about the outcome of the project. 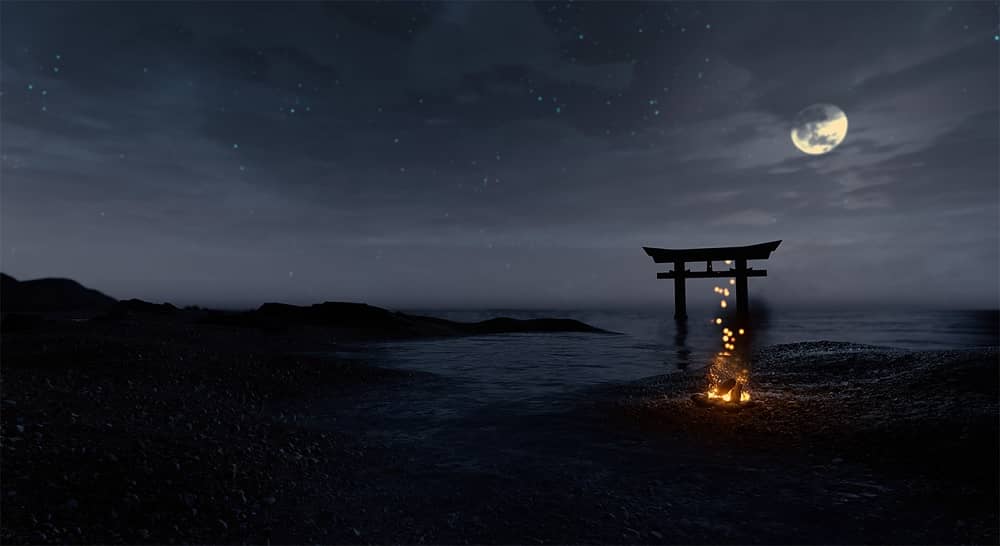 Personally though, I feel that Donald’s sole development of Niten is a fact to be lauded. With an incredible teaser trailer, I expected Donald to have an extensive list of development accolades under his belt, but was surprised when he told me this was not only predominantly a one-man show, but the first time he’s ever made a game. He’s contracted a couple other people along the way with some spare cash (he cited Will Whittaker, 3D asset creation and Paul Dipayan, programming), but largely, Niten has been entirely his own vision that’s dominated his spare time for the last nine months. “Making Niten was an accident,” Donald said. He went onto explain that he’s always enjoyed learning new skills, and a love of video games ever since his childhood spurred him onto messing around with game engines. For him, starting work on Niten was a natural progression: “I never set out to make a game; I just kind of fell into it.”

It’s not a project to be taken lightly though, and Donald himself is well aware of that. “I have gone into this project with my eyes open and with no misconceptions,” he cites on his Kickstarter page. “I have always understood that this was going to be incredibly hard work.” It’s his own experience with gaming that has spurred him on. “We all know the moment when you play a video game or watch a movie and you suddenly stop and think, ‘wow, that looks incredible’. That is the moment I am basing my game on.” If his trailer is anything to go on, I’d say Donald has already been successful in that regard.

Whilst Dear Esther and Gone Home might be the most obvious influence for his project, there’s plenty of other factors that have helped Donald shape Niten into what it’s becoming today. I asked him about his decision to set the game on a Japanese island – a location that couldn’t be any further away from his hometown of Edinburgh. He explained that Niten‘s setting is largely inspired by his love of old-school martial arts films; he loves the Japanese folklore that those films contained, and wanted to capture that on Niten‘s island. Incidentally, the island itself is entirely fictitious – Donald is using reference images to ensure that the setting is believable and in keeping with Japanese culture, but he’s more interested in focusing on romanticism than being completely geographically correct.

Some of Donald’s all-time favourite games have helped influence where he’s taken the project, too. He explained that immersion is a very important element to gameplay for him, and listed Fallout 3 and Grand Theft Auto 5 as two of his favourite experiences in this regard. “With Fallout 3, that wasteland is one of my favourite video game environments; it just sucks you right in”, Donald says. As for GTA5, he explained that he was never really into any previous games in the series, but “GTA5 is a masterpiece”. “Rockstar made a game where people can make their own game,” Donald says. “Couple that with the first-person mode and the huge level of detail they put into the environments and yeah, I can lose hours there. I love it”. Whilst Niten couldn’t be more different to Grand Theft Auto or Fallout in terms of tone and setting, it’s clear to see how Donald has applied the elements of these games that have impacted him most. Niten is a game that’s all about the player making their own experience; traversing the brilliant landscape in whichever way they want. Guns and high-action might be nowhere to be found, but Donald is keen to capture the feeling of freedom against an impressive backdrop. 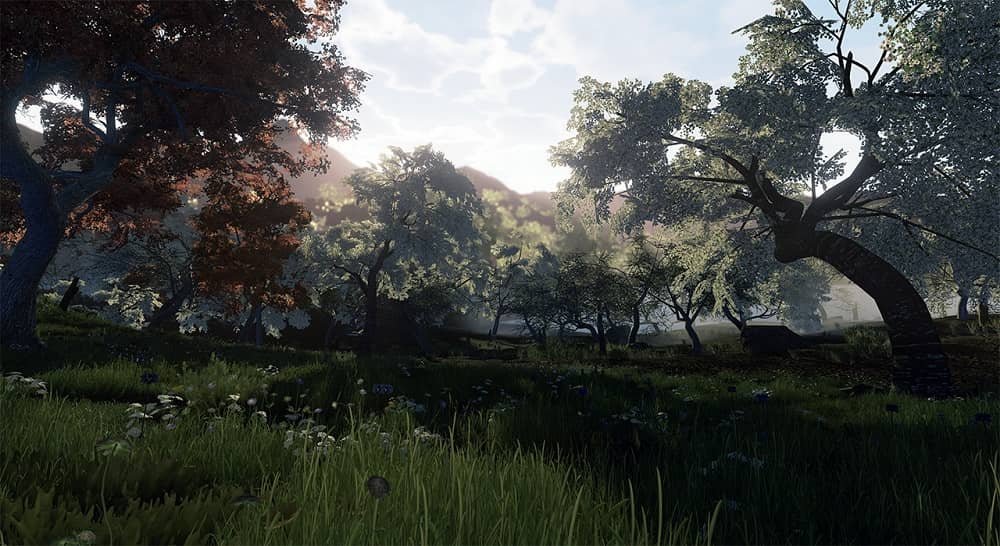 If his Kickstarter campaign is successful, Donald is hoping to have Niten released on PC by the end of the year. He’s also recently announced that a VR version will be developed. First person immersion is an important element to Donald’s vision, and so virtual reality seems like a logical direction to taken the game. Still, it’s a very bold undertaking – especially as Donald explains the VR experience will be entirely rebuilt: “I believe the best VR experiences are made exclusively for VR, so that’s why I’m rebuilding the game for that release.” Naturally, the VR version is set to release some months after the standard PC version. Perhaps he’s biting off more than he can chew – since Niten is his first ever project, some might think that Donald should be aiming a little lower – but this is a man with a very clear dream and his determination to see it through is plain to see.

With 10 days to go, there’s still time for Niten to get the backing it deserves to allow Donald to fulfil his visions and dreams. I remain hopeful for the project; the gorgeous location that Donald has created is one I’m very keen to explore, and going by the success of similar exploration games, there’s certainly an audience waiting to take Niten in with open arms.

Click here to visit Niten’s Kickstarter campaign, which remains active until 5 May.