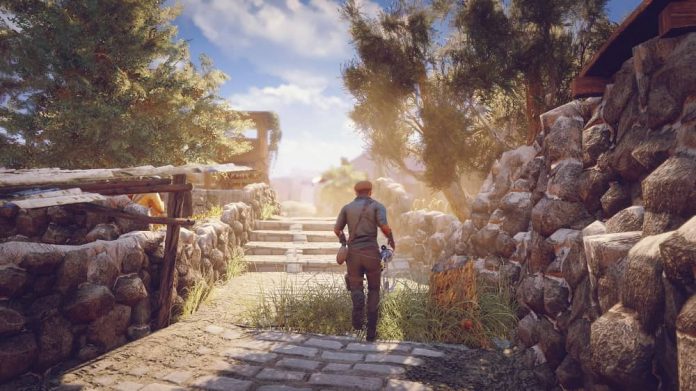 I wasn’t sure what to expect from Adam’s Venture: Origins when I first booted it up.

Images I’d seen from the game made it look like some kind of Uncharted wannabe, with plenty of edge-of-your-pants action. Other aspects made it seem more like I’d be delving into a Broken Sword-esque adventure, packed with puzzles and intrigue. Turns out it’s neither. Adam’s Venture: Origins tries to incorporate ideas from both of these masters of their genre but ultimately falls flat at almost every hurdle.

Set in the 1920s, Adam’s Venture: Origins sees you play as protagonist Adam Venture (see what they did there?), accompanied by his reluctant sidekick Evelyn. Spanning several locations including London, France and Jerusalem, the game tells the story of the mysterious religious corporation known as Clairveaux and Adam’s plight to stop their nefarious plans to take over the world. Despite being quite heavily story-driven, I’m rather hazy on the details; the game moved so quickly it was hard to take in what was happening, and frankly, it was all rather dull and cliché so failed to hold my attention. Something to do with the Garden of Eden, the Book of Genesis, and Templars (standard).

The most noticeable thing about Adam’s Venture: Origins is its incredibly horrendous dialogue and voice acting. It’s so bad that it almost goes full circle and becomes entertaining, but only in the most cringeworthy of ways. Adam’s character is one of the most irritating I’ve ever encountered in a video game; his alleged humour and what I assume is meant to be a “charming arrogance” comes off as being incredibly dim-witted. He’s constantly spouting one-liners that are not in keeping with the urgency the gameplay often tries to convey, and they’re unfortunately never funny. The delivery of the dialogue is equally as cringeworthy; voice talent clearly was not a concern of the developers here. 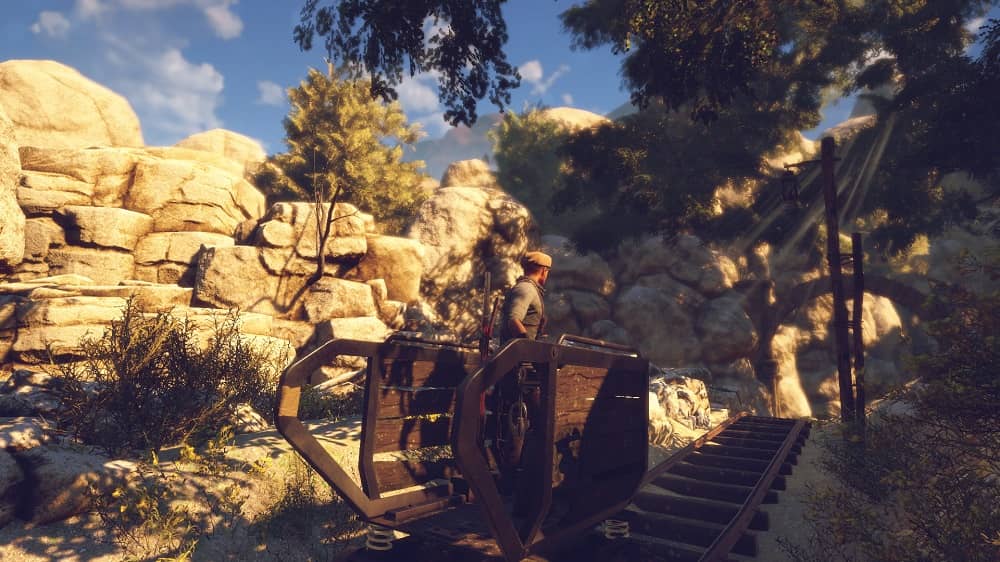 Graphically, the game is a bit of a letdown, too; saying it doesn’t push the power of the new generation of consoles very far would be something of an understatement. Besides a few nice textures in some areas of the game, the visuals are pretty average at best and easily mistaken for last-gen quality thanks to the constant popping and screen tearing. Coupled with the awful camera angles that often obscure your view, it makes for a pretty jarring experience. This can be almost forgiven considering that Adam’s Venture: Origins is pretty much a remaster of three individual Adam’s Venture titles, the first of which was released back in 2009. Developer Vertigo Games state this is much more than a simple port though, as each of the three chapters has been totally rebuilt on a new engine and reimagined to form one single, flowing story. Unfortunately, despite claiming that graphics, animations and character models have all been completely reworked, it still all feels rather janky. The character models in particular are of poor quality; facial animations are all but non-existent and Adam himself looks rather like he’s suffering from some chronic disease. The poor soul needs to pack in his intrepid adventures and get some serious bedrest, pronto.

Criticisms aside, the most important part of any game is of course its gameplay, and thankfully Adam’s Venture: Origins does manage to redeem some credibility in that department. Whilst it’s not going to set the world on fire for originality or innovation, the gameplay is basic but solid; an equal mixture of adventure and puzzles. Whilst you’ll likely see a few “game over” screens throughout your time with Adam – either by falling off the map or getting caught in a god-forsaken stealth section – there’s no grizzly deaths; Adam’s Venture: Origins is totally violence-free. That’s right, the guy’s going up against an evil corporation with not so much as a penknife in his pocket. If you need your fix of bullet-firing, bloodspurting action, you won’t find it here. What you will find is a very linear offering of adventure and puzzle solving; from riding mine carts to grappling through caverns and onto defusing bombs and solving mazes. The puzzles are plentiful, but they’re never particularly challenging; even the most taxing of them all can generally be solved by a few minutes’ worth of trial and error. There’s a varied selection, but you’ll end up playing the same type of each a few times over which can get a bit stale. As for the action sequences; they dip their toe into Uncharted water, but their full potential is far from realised. Upon jumping in a minecart, you’re heeded with a message of “Danger!”, expecting an absolutely thrilling ride. Instead, 20 seconds later you reach the end of a straight track, only needing to have pressed one button to keep yourself alive. Much of the “action” in the game follows in a similar way; it hints at excitement but never pushes the boundaries to make for really thrilling gameplay. 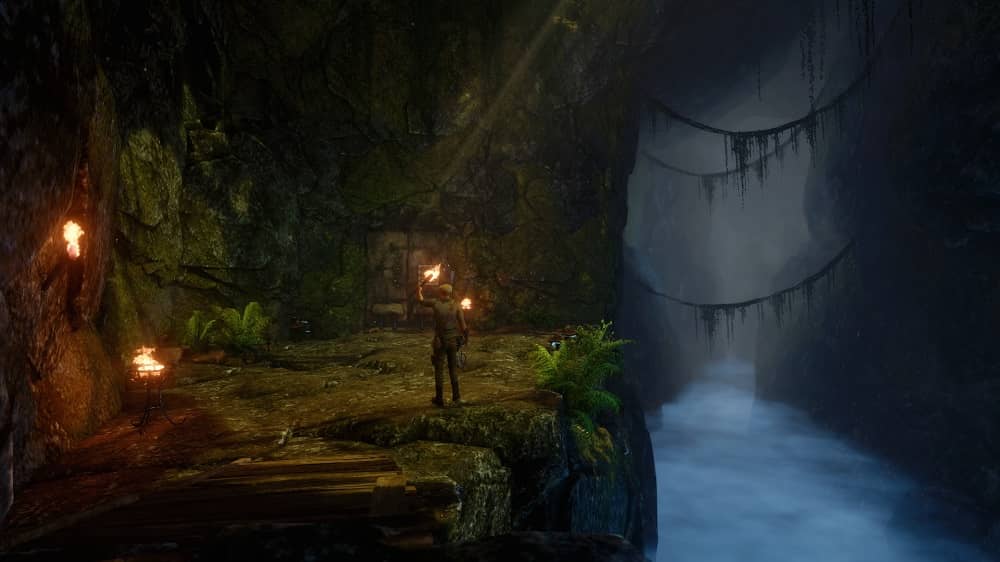 Adam’s Venture: Origins guides you pretty smoothly from one scene to the next, but the gameplay feels rather boxed in; there’s absolutely no room to wander off the beaten path, which feels like a missed opportunity. Some of the locations are actually quite well-designed, and the type of game this is should lend itself well to letting you step away from your preset destination and perhaps find an odd collectible or two. There’s none of that; you can’t even get mildly lost as you’ll only ever be able to travel in the direction of your next objective. This linearity makes for a very short experience – I completed the game in two sittings, which probably amounted to around five hours. Considering that Adam’s Venture: Origins started out life as three separate titles, its brevity is something of a surprise. Had the game’s narrative been paced better, or had we been given the freedom to do a little exploration, it would have felt like a more worthy experience. As it stands now, I unfortunately can’t recommend paying full price for such a short and markedly average game.

If you’re an ardent fan of puzzle games and don’t mind partaking in a bit of rudimentary action gameplay, then you may siphon some enjoyment from Adam’s Venture: Origins. Equally, if you happen to have a particularly awful sense of humour, then Adam might be worth spending some time with, but for the rest of us he’ll likely come across as an unfortunate lovechild of George Stobbart and Nathan Drake who was dropped on his head as a baby. It’s a shame; Adam’s Venture: Origins has some promising ideas, but never develops them far enough to make this a title worth investing in. Pick it up in a sale, but otherwise there are much more worthwhile adventure/puzzle titles out there.

Adam’s Venture: Origins is available on PC, Xbox One and PS4. We reviewed the Xbox One version. 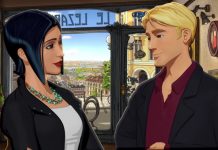