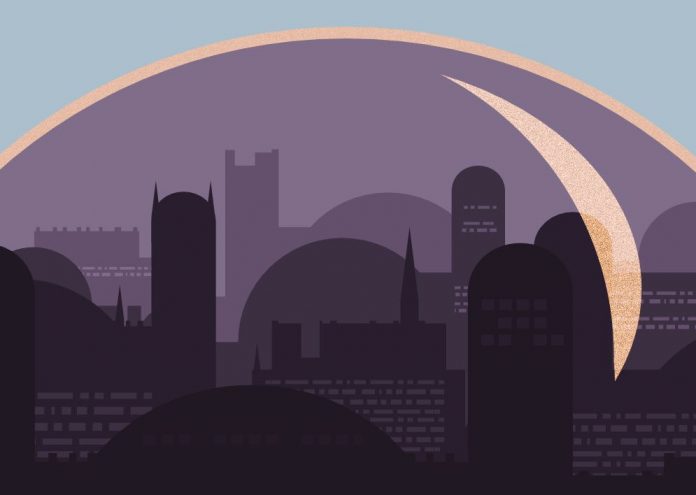 I first encountered City of the Shroud at EGX Rezzed 2016 in London. The poster art caught my eye: a looming, priestly figure with a hint of the plague-doctor about them. Overlaid with this medieval image was a sci-fi font that, within its lettering, hinted at a labyrinthine technological city. I was intrigued to say the least.

Going up to the stand, I was greeted by Chris Nairn who I’d later find out was their composer and audio producer. He was energetic and immensely friendly – taking the time to help a clueless soul like myself. He explained the premise behind City of the Shroud, an idea of a living world, set in a fantastical city, in which players determined the story based on their actions and which factions they support. He didn’t need to say any more after that, as I was already on board, but he went on to describe the tactical gameplay mechanics: the unique twist is that it’s real-time, not turn based, making the action tense and fraught. It also makes it bloody hard.

“…the premise behind City of the Shroud [is the] idea of a living world, set in a fantastical city, in which players determine the story based on their actions and which factions they support.”

So that was how I sat down to play City of the Shroud for the first time. I played a small section of the demo before handing over to another gentleman who’d been waiting. I was hooked already by that point. Since then I have played the free demo in full (downloadable from their Kickstarter page) and the initial story-mode demo (which can only be accessed with a special key).

From this I can tell you City of the Shroud has the potential to be something really special. I say “potential” purely because it is only in demo-form for now and it’s good not to get ahead of ourselves. Having said that, I’m an optimist and I believe Abyssal Arts are more than capable of pulling it off. The most important thing which they have gotten right is the feel of the game. Chris has nailed the music: from the guitar-shredding solo that plays when you win a fight, to the JRPG adventure-song which sets the tone of a light-hearted adventure that might just lead somewhere a little darker. There’s more than a little Final Fantasy influence in City of the Shroud but it also stands out as its own thing because of the unique combination of so many influences. Fans of Jack Vance’s The Dying Earth would do well to pay attention to this game; there is something of the crazy sorcerer-centric world, with hints of ancient technology, that comes to life again in City of the Shroud. Keaton White (Project Lead) evidently has a clearly-defined vision of what the game will be. His previous experience at Capcom puts him in good stead to deliver on a finished good. Having met him at EGX, I can also confirm he’s a great guy who’s passionate about video-games. You might think this is is an obvious trait for anyone working in this industry, but I’ve met so many devs who are ambivalent to video games it’s refreshing to meet one with such enthusiasm. 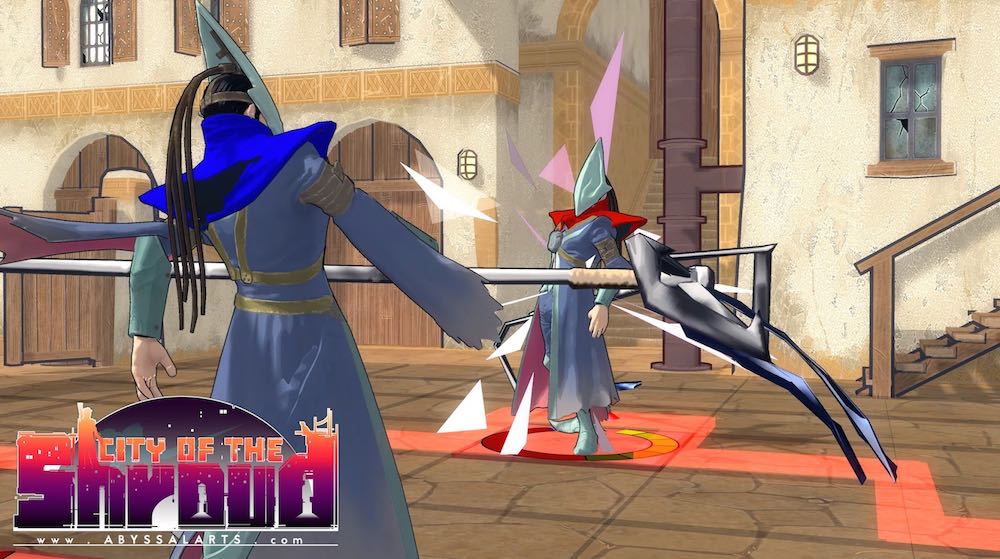 The dialogue is for the most part on point thanks to best-selling author Moira Katson, who is developing the narrative. It is witty, sometimes laugh-out-loud funny, and most importantly, gives us a real sense of character. When you are talking to Navid, the holier-than-thou priest (who may not, in fact, be as holy as we think) you do not feel the artificiality of most video games: that you are getting information about future levels or game-paths from them. Rather, you genuinely feel like you are discovering him as a person, and that the choice you are making between the factions’ leaders is a choice between different people.

Iskendrun, the fantastical city of the shroud itself, feels like a real place even though you actually never wander its streets. Without being bombarded by lore, it has a sense of history. You can visit different locations for quest objectives or simply to randomly battle the local thugs and guards, rather in the same way as you explore the mysterious world of Failbetter Games’ Fallen London. If there is something I want more of from City of the Shroud, it is those random side-quest encounters. The hooded man at the bar. The mysterious beggar. The sense that although there are these larger forces at work, the city has an underbelly that is deeply significant in its own way.

“The most important thing which they have gotten right is the feel of the game. Chris has nailed the music”

The combat system is fresh. Your characters (four in a party) each have a combo wheel which they can populate with Link Gems. Link Gems allow you to perform special abilities. To execute these abilities you need to complete the combo sequence in the correct timing (making it more interactive than turn-based strategy games in which you simply click which spell you want to use). Some of these abilities can be chained together for devastating damage. The strategy dynamic to the game is real too – even moving your characters costs valuable action points, so positioning is everything. You can also collect Stat Gems, which do what they say on the tin and allow you to upgrade your characters’ Stats. Like any true RPG the level of customisation is immense, even at this stage in the game’s development. The mechanics are simple and easy to grasp, yet executing them while in a real-time fight is difficult and engaging. The enemy often does not do what you expect, making your maniacal plans challenging to bring to fruition.

Overall, one gets the feeling of phenomenal video game in the making based on the previews I have played and seen. Of course, nothing is perfect, especially at demo stage. In my personal view, I would like a little more grittiness to the storytelling. I find the dialogue at times to be too meta and self-referential with its humour. I long for that moment where you realise there is something dark about the city beneath the buoyant humour. Maybe that’s my graphic horror roots talking, but I think a little darkness goes a long way to drawing people in. Another small criticism is that though aesthetically City of the Shroud is very beautiful, with a watercolour art-style rendering everything mystical, in the final game it would be great to see more character model variation. Currently there are only about four models. I’m sure expansion of this is planned. On the Abyssal Arts website, it says “players join alliances and battle for control of the city under the threat of the Shroud and its creatures” – that key last word is what I’m eagerly waiting for. Of course, many or all of these criticisms will be rendered irrelevant once the first episode of the game arrives in complete form. There are four episodes planned and as the website also says: “the story will only happen once”. How wonderfully ominous. 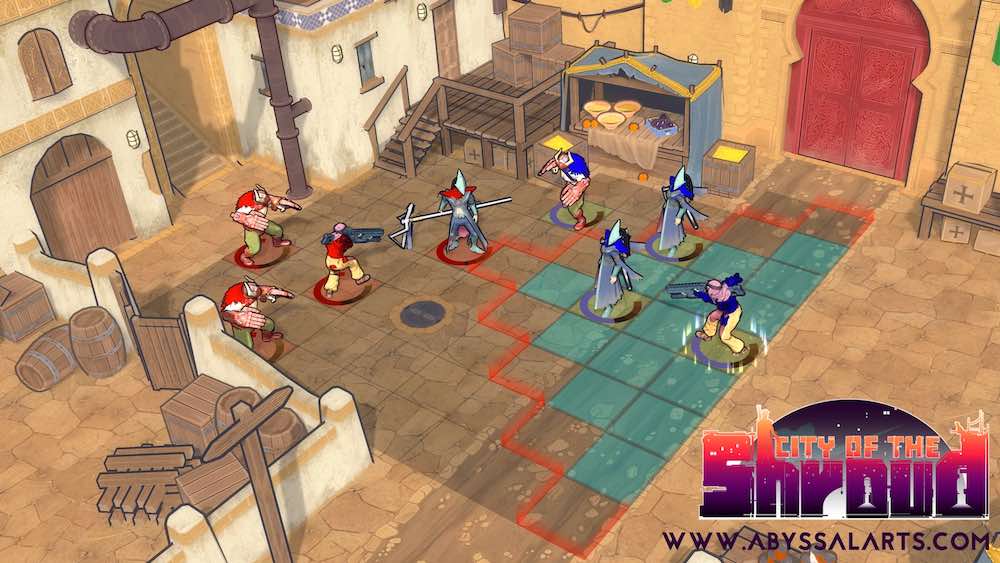 City of the Shroud got funded only eight days in to its campaign, and currently they are looking to smash the stretch goals. Support like this shows how innovative and exciting this project is and that it has captured people’s imaginations. There is something off-key about City of the Shroud, but I mean it in a good way. It is a curious mixture of so many elements but somehow pulls it off. It is fantastical, sci-fi and eerily historical, as though it could be our own forgotten past. It is rare to find a game so unique in this world of brands and franchises. Supporting City of the Shroud is an opportunity to get something different off the ground, to say yes to independent games developers, to innovation and to the new.

And while you’re at it, get a chance to play a freakin’ awesome game.