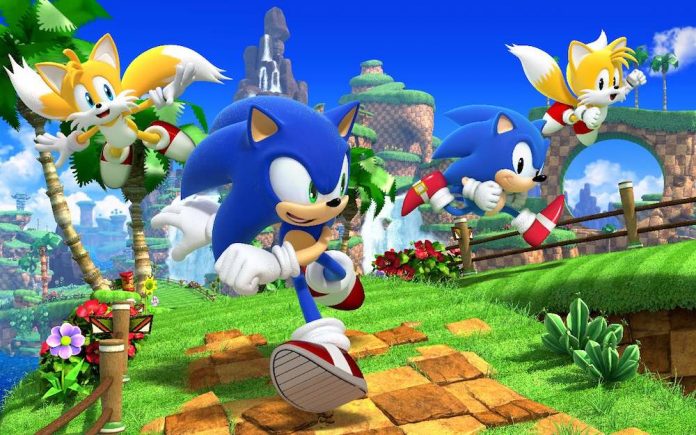 If you needed a mascot for your brand and your competitor had a podgy plumber with a noticeable nose and magnificent moustache, who or what would you choose as yours? It needs to be bright and cheerful with features that will immediately identify them as your property. Probably the last thing I’d think of would be a blue, super-sonic, anthropomorphic hedgehog with Michael Jackson’s shoes, a.k.a. Sonic The Hedgehog! But maybe that’s just me…?

Sonic’s debut appearance was in the eponymously titled Sonic The Hedgehog, released all the way back (25 years ago, at the point of writing!) in 1991. He went on to star in over 20 of his own games as well as multiple spin-offs with Nintendo’s Mario in their popular Olympic tie-ins. Together, all of which add up to almost 100 million sales. Sonic has also appeared in several comics, TV shows and movies, with his own theatrical feature due out sometime in 2018.

Pretty impressive for a Hedgehog.

“…he didn’t get there alone. Sonic has dozens of iconic friends that he’s encountered across the years, including Tails [and] Knuckles the Echidna.”

But he didn’t get there alone. Sonic has a roster of dozens of iconic and memorable friends (and foes) that he’s encountered across the years, including Miles “Tails” Prower (read: Miles Per-Hour), Knuckles the Echidna, Shadow the Hedgehog, and the confusingly/inconsistently named Dr. Ivo Robotnik/Dr. Eggman.* Some of these characters (like Shadow the Hedgehog) have enjoyed their own spin-offs over the years but nothing has been able the recapture the magic of the original Sonic the Hedgehog.

*Either one of these names is correct, though these days he just goes by Dr. Eggman. In the manual for the first game, he was titled Robotnik in western releases and Eggman in his native Japan. SEGA won’t commit to naming him, though he has been referred to as both of these, as well as Dr. Ivo “Eggman” Robotnik (named after his body shape) with Eggman becoming a more permanent moniker in recent releases after years of indecision. It’s especially confounding considering there was the enjoyable Dr. Robotnik’s Mean Bean Machine on the Mega Drive. 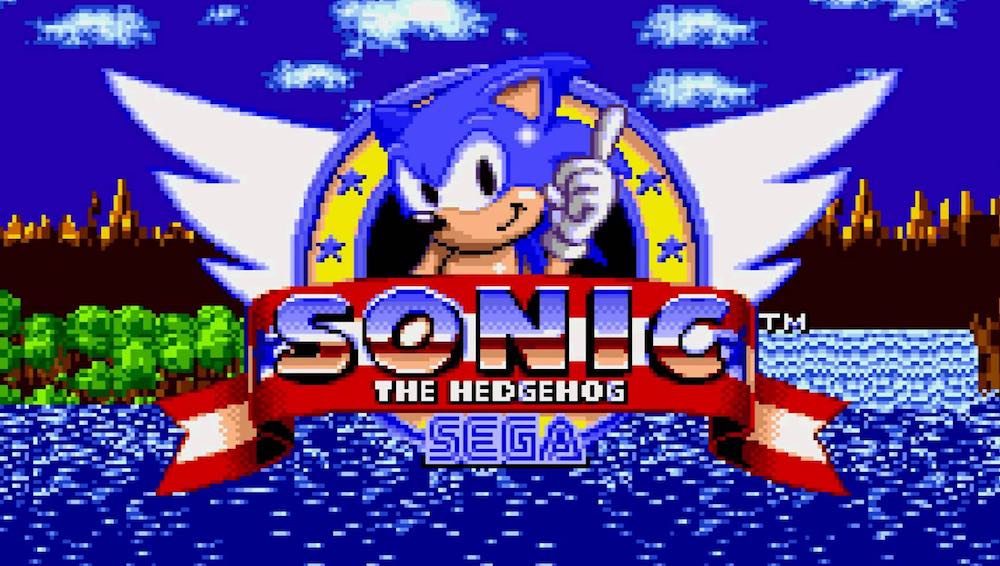 Sonic was a different type of game to what we had seen before. The bright colours, hectic sounds and the blistering speed was all hitherto unseen on a home console. Games until this point were like Super Mario, they were enjoyable in their own way, but nothing ground-breaking had come along for a while and Sonic was just what audiences needed to reinvigorate them.

The levels did have the odd, questionable design flaws. For instance, if you’re hurtling forward so fast you can’t see the path in front of you as it’s just a blur of colour, how are you supposed to see a set of steely spikes or a mischievous, mechanical moth waiting to stun you?

This is where the now infamous ring collecting came in handy.

“…nothing ground-breaking had come along for a while and Sonic was just what audiences needed to reinvigorate them.”

Until this point in games, if there was a rogue robot who happened to clatter into your character, you’d either die, or lose your power-up. But no more! Sonic could now grab gold rings that were strewn across each level. Once he collected 100 of these bad boys, he’d get a 1up! (An extra life) What this also meant was, if you had zero rings and you were injured, it was back to the last checkpoint for you. Have one or more rings and the injury would instead send your entire collection flying across the screen for you to collect again (if you were fast enough).

Fresh ideas like this reinvigorated the genre and kept Sonic feeling relevant for most of the first four years of Sonic’s life. This is what I think of as the golden age of Sonic. 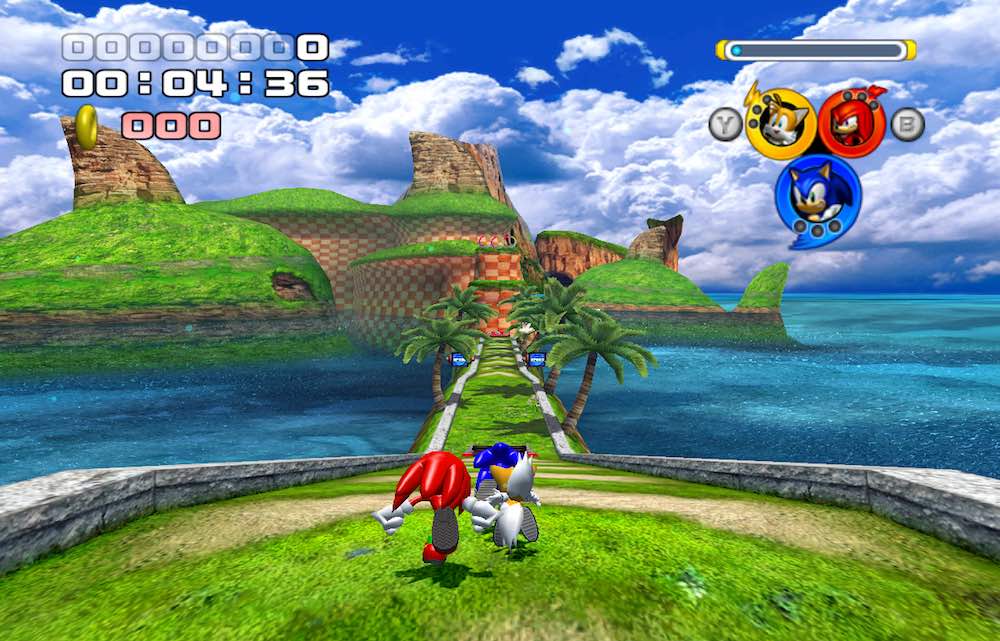 The first title was followed up by, perhaps unsurprisingly, Sonic the Hedgehog 2 in which two friends could play together at the same time. The screen was split horizontally as is fairly common these days and one player assumed the role of Sonic, the other controlled his buddy Tails. This often lead to arguments of who would play as who because each character had a specific skill-set that was fun to play with; Sonic was Sonic (obviously) and he could use the power-ups, but Tails was new and could fly!

Sonic the Hedgehog 3, released in 1994, featured more of the same (which is sometimes exactly what you want) colourful levels, fun characters and exciting gameplay as well as the ridiculously useless (unless you had a second player) Tails, bumbling around behind you getting spiked and squashed or falling off ledges or into lava and generally spending more time re-spawning than he does anything else. This was then followed up by Sonic Spinball, a well-made pinball game featuring Sonic as the ball. It sounds pretty out-of-left field, but it’s a solid entry that’s well worth a play.

“…one player assumed the role of Sonic, the other controlled his buddy Tails. This often lead to arguments of who would play as who…”

Finally, Sonic & Knuckles (S&K) ushered in the end of the golden age. While it featured its own story and levels, the big news was the new “Lock On” system, where the cartridge (yeah, that’s how long ago this was) for Sonic 2 or 3 could be inserted into the S&K cartridge and it would allow you to play as Knuckles in either of those previous games, as well as unlocking Tails as a playable character in S&K. This also unlocked different variations of each level across all three games, offering greater replayability.

Sonic’s later forays into three-dimensional worlds never worked quite as well as his 2D adventures.  The Sonic Adventure titles were well-received, as they not only accepted the move to 3D but they made attempts to create new gameplay ideas and innovate when they could, but as the series wore on, there was a clear desire to return to the 2D world.

Sonic Heroes fell victim to this yearning and suffered from poor level design as it attempted to recreate the feeling of the blistering speed of the originals from a new, third person perspective. But with objects and enemies flying at you at such a pace, it became disorienting for some, especially as the in-game camera control was pretty terrible. Despite this, Heroes did still try to innovate in its own way; you could now choose a team of three characters to play as at any one time. 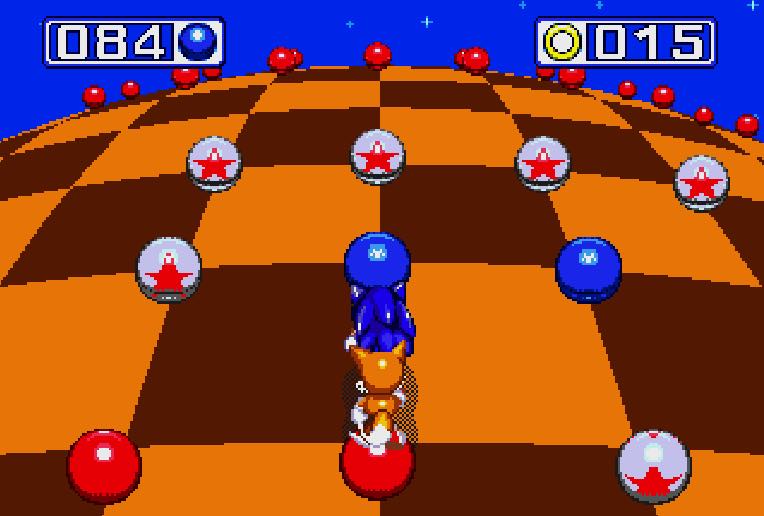 Each team member had a specific ability of either Speed, Flight or Power. You could choose Team Sonic with its three classic heroes (Sonic, Tails and Knuckles), Team Rose with the somewhat obsessed, eternal Sonic-devotee, Amy Rose, her friends Cream (the rabbit) and Cheese (Cream’s Chao friend) and their pal, Big the Cat. There was also Team Dark with Shadow the Hedgehog and Team Chaotix with Vector the Crocodile.

Eventually, the changes in direction led to the series becoming a mixture of mid to low quality games for the Wii (or occasionally PC) with the high points being spin-off titles like Sonic & SEGA All-Stars Racing and his Olympic crossovers with Mario for the Wii.

“…Sonic Generations was an interesting blend of
classic side-scrolling, mixed with more modern gameplay via a time-travel storyline”

A brief (almost) return to form materialised in 2010 with the release of Sonic the Hedgehog 4: Episode I,  before Episode II spoiled things a little with tacked-on sections like snowboarding instead of the focus on platforming which Episode I had done so well. Between these two titles we also enjoyed Sonic Generations which was an interesting blend of classic side-scrolling, mixed with more modern gameplay via a time-travel storyline. Overall, this little spate of quality titles whet gamer’s collective appetites for another decent Sonic game. Will that be Sonic Boom: Fire & Ice or perhaps the rumoured follow-up to Generations (suggested to tie in with the series’ 25th anniversary (feel old yet?) in 2016) or something released alongside that film I mentioned which is due in 2018? I don’t know.

What I do know is that without Sonic the Hedgehog and its tremendous impact and influence over the last quarter of a century, the gaming landscape would look very different. The bright and breezy environments with lots of hidden details and areas to explore, a story that actually ties up fairly well despite its length (*cough* Metal Gear Solid *cough*) and constant attempts to add something new to each iteration makes Sonic the Hedgehog yet another Game That Changed Our Lives.