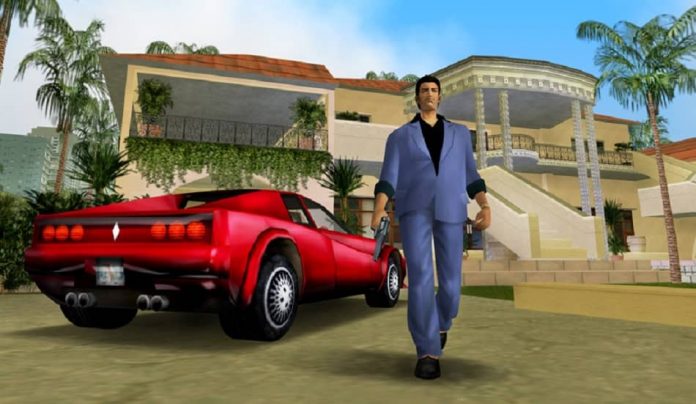 With the first title released in 1997, the Grand Theft Auto series began its (so far) 18-year journey as a top-down, 2D action title and from that point on, both the series and its creator, Rockstar Games (or DMA Design at the time), became powerhouses in the gaming industry. Even since those early days, both have been constantly courting controversy and court cases, with neither one seemingly putting a foot wrong in the eyes of the fans.

Grand Theft Auto (GTA) started out as a somewhat different title called Race’n’Chase. The basic idea was similar to that of GTA, but instead of playing as a criminal, you could choose between that or being a cop. Of course the game was play-tested, but it wasn’t being enjoyed. Fortuitously, an unrelated patch affected the code of the cops so that when you were playing as a criminal, they would hunt you down fiercely and without mercy. The new (accidental) dynamic made the game much more fun, it was re-titled to Grand Theft Auto and released on a relatively unsuspecting public. Since then, almost every entry in the series has shaped the industry in a way that has changed our lives and for that we should be very grateful.

We’ve all heard that any publicity is good publicity and GTA has certainly had its fair share of publicity. When the original title first launched in ’97, several countries banned it completely whilst others, like the UK, allowed it to be sold but condemned it, officially. As we all know, if the government doesn’t like something it only tends to drive interest in whatever that thing is. Rockstar even paid some newspapers to print scandalous articles about the game to drive sales.

Once the first few copies had sold, word of mouth quickly spread and inevitably those who were under 18 also got to play it; whether on a friend’s or relative’s console or PC or if, like me, someone managed to sneak it onto the IT system in your school (bravo, whoever you were. Bravo.), and it quickly became a badge of honour among friends to have played it or, even better, to own it.

The worlds handed to us by Rockstar have been such perfectly crafted realms that each title, despite the gameplay remaining pretty much the same even after the move into 3D, feels like a completely new experience. The early titles in the classic top-down style lacked the same level of cynicism you might see today as there was no space for movie posters or advertising billboards and the world of  social networking, so readily lampooned in GTAV, didn’t even exist. We still got place names like “Hackenslash”, “Gonad” and character names like “Hung Well” and “No Chin” to raise a smile, but it was the gameplay that created the really funny moments.

Little things like the sound effects when innocent pedestrians would be splattered by an inexplicably insane taxi driver, leaving a trail of blood and a corpse for a police car to simply drive over. Or should you attract enough attention from one of the assorted police departments, you could lead them on a merry chase, causing untold destruction before tricking them with a nifty bit of braking and then watch them all pile into the sea.

Things still weren’t quite perfect; there was a lack of enthusiasm for the actual story or characters, and for the most part, players would simply get their enjoyment by causing mayhem. With the game being single player only, it was easy enough for friends to get together and play a simple “one life” rule, before switching control between you, hoping that one of you didn’t decide to try and “drive like the traffic” but it always felt like there could have been a split screen mode to compete in the “Kill Frenzy” mini-games.

Once the series had evolved through its earliest iterations (including, astonishingly, a heavily censored but otherwise like-for-like version for the GameBoy Color) which had featured the familiar territories of Liberty City, Vice City and San Andreas as well as London in either 1969 or ’61 respectively, we were whisked to “Anywhere, USA” and its regions of Downtown, Residential and Industrial for some upgraded, 2.5D action in GTA2. Some preferred the simplicity of the original but many were pleased with the visual boost and the fact that if your car was about to turn into an explosion, it actually gave you a chance to jump out, rather than join it in its flamey death. 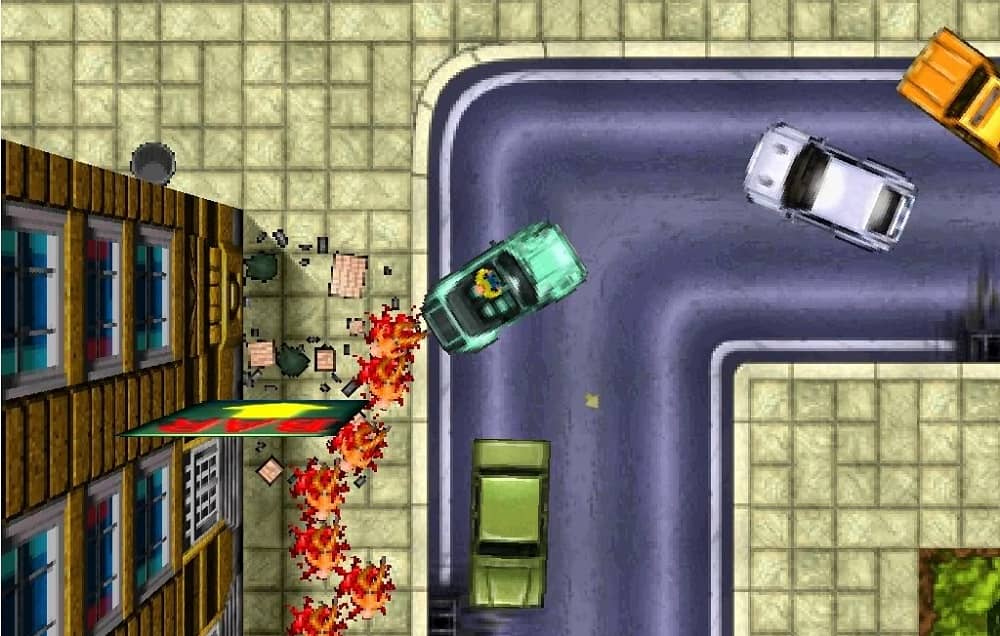 Eventually, we made the jump to 3D (and to roman numerals) for the first PS2-era title, GTA III. Set in a completely open-world Liberty City, you could continue your rampages while looking your victims in the eye as you toss Molotov cocktails at them and their bags of shopping, super-glued to their hands.

The sense of fun and humour that is present within all GTA games is what separates it from the pack (and from copycats like The Getaway or later entries in the Driver series). From the first game where you could become the leader of a string of Hare Krishna, to GTA III where you were introduced to the radio stations like Chatterbox (more on those later) and eventually (currently) to GTA V and to the antics of Trevor, this has always been a highly amusing series with many laugh-out-loud moments as well as layered humour, cynicism and satire.

In later iterations, beginning with GTA III, the larger-than-life characters provided much of the comedy, too. You’d have characters like mob boss Tony Cipriani calling in to Chatterbox for advice, as he felt he didn’t make his mother proud. Then move along to Vice City (my personal favourite in the series so far) and we meet the sarcastic and acerbic lead Tommy Vercetti and his supporting cast of Ricardo Diaz, Phil Cassidy and Ken Rosenberg. Each entry refined and humanised the characters until GTA V presented us with the new dynamic of three playable characters which you could switch out on-the-fly, each one central to the plot and providing their own sense of humour and different view of the world, but I digress.

The new three-dimensional world was a real joy to explore, even if it is mostly grey and drab compared to later entries (Vice City, GTA V). At the times, the variety of cars you could jack, weapons you could use and areas you could explore was a real novelty. There were other games out there doing similar things, but if you stick (the newly remastered) GTA III in front of anyone who enjoyed it when it launched in 2001, they’ll instinctively know where things are in the city, because most likely they played it for most of their young lives.

When things moved on, just one year later Vice City arrived and brought with it a whole lot of pastel and neon colour which was welcome after the previous entry’s fairly dull, urban environment. Now there was a clear, beautiful blue ocean to sail a luxury yacht across, or a pink and orange hazy sunset to enjoy on South Beach with Ocean Drive’s Art Deco clubs, bars and hotels behind you, providing the most 80’s backdrop imaginable.

The overall tone of the game just seemed funnier, too. As amusing as GTA III had been (for me, Chatterbox especially) Vice City now offered the characters I mentioned earlier as fully fleshed-out people, as opposed to the silent “Fido” (the playable character in III). These interactions between these characters were not only linchpins in the story, but also good opportunities for Rockstar to flex their comedic muscles. Tommy Vercetti generally berating everyone, Ricardo Diaz shooting his VCR because it wasn’t plugged in or Steve Scott, the shark obsessed movie director irritating our protagonist. 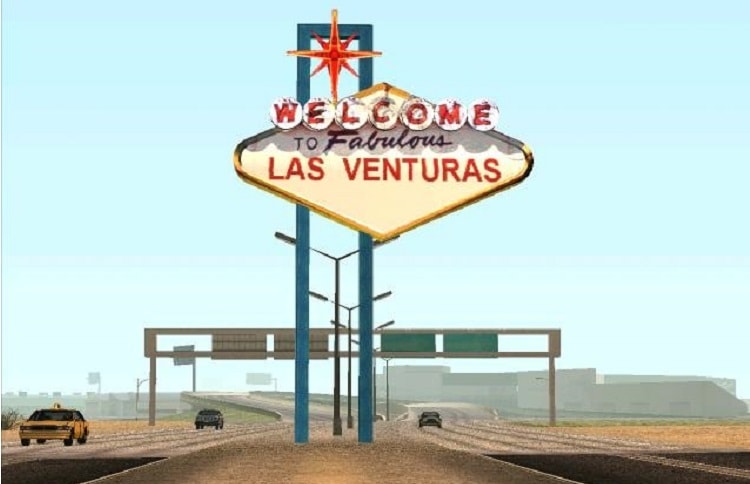 Not only the characters but also the pedestrians, posters, radio announcers and even the AI provided plenty of laughs. Whether it was the sound of VCPR host Maurice Chavez trying to diffuse the tension between a psychotic pastor, a confused and possibly murderous orphan and an overly enthusiastic naturist or the full force of the VCPD struggling to catch you as you wheelied down the beach on your Faggio scooter listening to LoveFist, there was always something to make you chuckle.

There was then a two year wait until arguably the most popular entry in the franchise appeared: GTA: San Andreas. Now this was, quite literally, a game-changer. The map of San Andreas was gargantuan, and for most GTA players it was the biggest map they’d ever played. It featured three huge cities, each one massively detailed and based on the real-world locations of either Los Angeles (renamed Los Santos), San Francisco (San Fierro) or Las Vegas (Las Venturas). In between these urban sprawls was miles and miles of forest or desert and even a mountain, Mt. Chilliad (based on northern California’s Mount Diablo) that you could climb to the top of. All this with only one loading screen, which was an incredible achievement. Sure there was a little bit of pop-in here and some texture issues there, but to have three cities and all of the extra towns and villages dotted around available in an instant was a fantastic achievement.

The narrative that took you to these cities was a classic homecoming tale with double crosses and tragedy laced throughout. It felt more grounded than Vice City as where Tommy Vercetti (eventually) lived in the splendour and excess of Diaz’s mansion, new protagonist Carl “CJ” Johnson was returning to a down-trodden cul-de-sac in a slum neighbourhood on the outskirts of Los Santos; a world away from the golden beaches and clear waters of Vice City. It was yet another display of Rockstar’s ability to pair fantastically detailed worlds with believable and likable characters and stories; something we still benefit from today with series like Mafia, Sleeping Dogs and their own Red Dead Redemption all taking cues from the success of GTA.

San Andreas also featured some RPG elements in an attempt to add something fresh to the game. Abilities generally upgraded the more you used them; running improved your speed, swimming improved your lung capacity and working out made you stronger. Unfortunately, the system was maybe too in-depth; if you didn’t eat anything, you’d waste away which made you slower and weaker but eat too much and you pile on the pounds, which made you slower, too. It was a good idea, just not perfectly implemented. It lead to players getting frustrated by having to make sure their character ate just the right amount, worked out enough and stayed in good shape. Fortunately, for each misstep like this, there was a counter point, like the new “burglary” mini-games or the gang control system where the Grove Street Families would take over land from rivals like the Ballers, thereby growing in number, but they’d come under attack, forcing CJ to help out.

These PS2 games (and to a lesser extent, the PSP ports Liberty City and later Vice City Stories) were looked upon as an iconic trilogy. They offered real freedom, great music, fantastic (for the time) visuals and timeless gameplay. It was a good thing people enjoyed them too, as they wouldn’t get a “proper” sequel for San Andreas for another four years, which at the time seemed like an eternity, but would it live up to the hype?