“Ever draw a spell when you really needed a minion? Never again! Your deck will be 30 Raven Idols, so you’ll be able to discover whatever you need!” It’s the Tavern Brawl for 20-25 April: Idols of Azeroth!

I think it’s fair to say it’s a very entertaining Tavern Brawl this week. The Raven Idol card makes this Tavern Brawl descend almost into a bizarre episode of Countdown – “Hmm… I think I’ll have a minion please Carol”. I love Tavern Brawls where you are essentially building your deck and trying to counter your opponent at the same time, and Idols of Azeroth is pretty much the definition of that. Raven Idol allows you to discover either a minion or a spell depending on which you choose; then you get a choice of three minions or spells. It seems that the pool you get your discoveries from are locked to your class, but that helps you build a more effective deck throughout the match. It’s also a good week for new players given the random nature of the Raven Idol card. I understand they might not really know what to pick out of what they get, but they get to try out a whole array of cards this week. 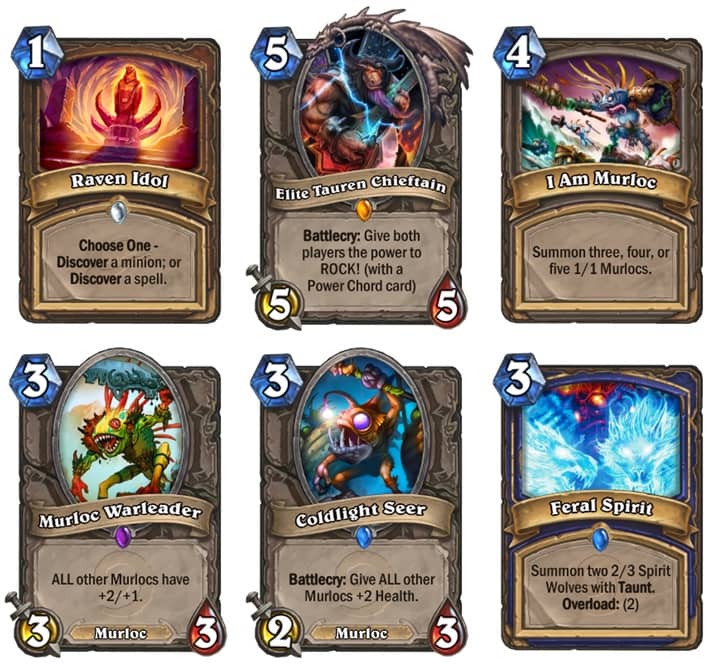 My deck eventually turned into a really good Murloc deck towards the end of the match thanks to pulling the Murloc power chord from the Elite Tauren Chieftain. I wanted to use a class with spells fit for stopping any sense of board control from my opposition, and at the same time having many forms of synergy I could build to create a deck from the class pool, so I went with Warrior. In the match I played I came across a Shaman which to be honest I would never have chosen. The Shaman’s problem was that so many of that classes spells are overload cards. Overload cards will hinder you the following turn as they lock one or more mana for you next turn. When discovering spells, the Shaman was extremely likely to discover overload cards, and they did plenty of times. So for example, at turn nine the Shaman I faced had only left themselves with two mana to spend.

Considering my continual war with luck, I was surprised that I had a fair bit of good fortune with this Tavern Brawl. Though my card pack was still rubbish, the choices I had from Raven Idol had me stumped as it presented me with three good cards more often than not; it was also giving me spells that I needed to gain control of the board against my opponent. The first three turns were just the two of us using Raven Idols to start building something.

It was the Shaman who made the first real move, however, using their coin to play 1-3 card. Thankfully, by this point, I’d already acquired a Twilight Drake so had a decent card for turn four, and the Drake ultimately turned into a 4-7. The Shaman spent a lot of the match delaying the inevitable like using two Feral Spirit cards; though I took some early pressure I was only ever put down to 24 health. It all came down to the Murloc synergy I managed to create, my Elite Tauren Chieftain gave me I Am Murloc; after that, I’d also managed to acquire a Murloc Warleader and a Coldlight Seer. My turn 10 was a pretty good turn as I played all of my Murloc cards at which point I pretty much won the game as I had lethal.

All in all, Idols of Azeroth is a very enjoyable Tavern Brawl as it takes full advantage of the discover mechanic that was introduced with The League of Explorers. It was a Tavern Brawl where my opponent would take their turn and I would perhaps have to adapt by using a Raven Idol card for a decent spell this time to try and counter their turn, and luckily for me, good spells are what I got. This is a Tavern Brawl that I think I could play more of over the weekend for a quick game of Countdown… I mean Hearthstone. I think I’ll have a spell this time please Carol.

What kind of deck did you manage to pull off with the Raven Idol card this week? Let us know in the comments below.