“The master mages of Dalaran have gone too far this time, opening up hundreds of portals! Choose a class and use a few spells and a WHOLE lot of portals to defeat your rivals!” It’s the Tavern Brawl for 6-11 April, Too Many Portals!

Too Many Portals makes its third appearance in the Tavern Brawl having appeared for the first time way back in August. As a pre-built deck week, it’s a Tavern Brawl that new players can enjoy just as much as veterans. This week, players’ decks are filled with Unstable Portals; it adds a random minion to your hand and it’ll cost three less than usual to play. The deck is also filled with random spells, so naturally with my luck, the random spells I got lost me the game. You can actually watch the match this week, so you can witness my terrible plays.

I decided to play my first game this week as a Paladin; I was hoping to get good spells pulled to give minions divine shield or be able to buff them up. You’ll see from the video or read further down that I didn’t quite get the spells I was hoping for. On hindsight perhaps Paladin wasn’t the best class to go for considering that spells they have only really synergise well with their cards, and Unstable Portals summon any random minion from any class.

I lost. What I got from the portals at the start (Felguard) was great for early board control, but my terrible luck led me to get bad minions and spells; none more so than getting two Anyfin Can Happen in two turns which is literally useless, and lost me any chance of board control. So after a relatively good start with some nice control my opponent, a priest, was able to gain control and do quite a lot of damage to my face. My opponent started pulling much better cards than I was like Chillwind Yeti and Bomb Lobber which ultimately led to my inevitable demise.

In principle, Too Many Portals is pretty entertaining, and as much as I don’t think pulling two Anyfin Can Happen is hilarious I’m sure that you do. I like and dislike Too Many Portals – mainly because of my distinct lack of luck. Again this is a Tavern Brawl that can favour Mages as they have the best spells in Hearthstone; something that I believe the development team should be looking at, and it does look like they are with the upcoming set, Whispers of the Old Gods. 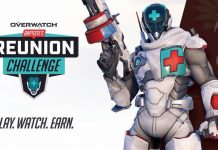 Get New Baptiste Cosmetics with the Overwatch Baptiste Reunion Challenge