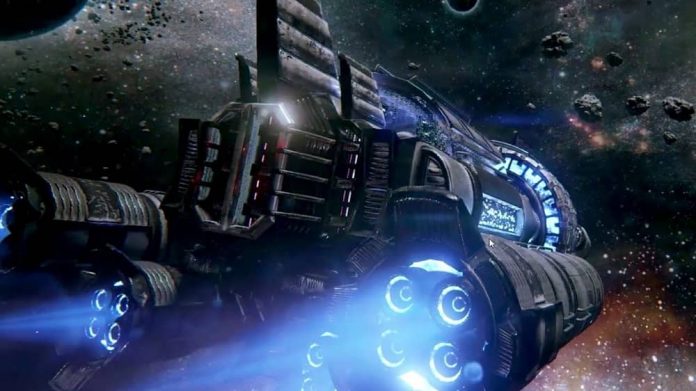 It’s not often that a game can present itself, at first blush, as an aggressive abortion of undercooked, slapdash design elements that barely manages to drag its mutilated carcass off a freshman developer’s sketchpad and onto Steam’s notoriously permissive and unregulated wasteland of a storefront then, against all odds, over a series of increasingly tolerable playthroughs, manage to almost entirely change my mind on the whole subject.

Welcome to Into The Stars. If your only experience with it was to be the screenshots and feature bullet points that developer Fugitive Games put up on their website you would be forgiven for believing it looks great. I am also certain that your immediate experience with the actual game would disabuse you of that notion entirely because Into The Stars is a goddamn mess. There seems to be a core of beauty and polish that exists in some of its more prominent elements, such as the incredible beauty of the universe you explore, the massive ship you captain, or the oddly fantastic voiceover work on display, but all of it is offset by the horrendous UI, complicated and poorly explained systems, choppy animations, laughable character design, and the oppressive, indifferent randomness of it all.

But I’m getting ahead of myself. Into The Stars is essentially a video game version of Battlestar Galactica. You are the captain of a massive interstellar ship called Ark 13 carrying a living city and a civilian population of 10,000 fleeing Earth after an encounter with an aggressive alien force known as the Skorn. You are following in the tracks of the 12 other Arks that came before you and have since lost contact while looking for a habitable world in the same region of space where they all went dark. You are on the run, poorly defended, outnumbered by your pursuers, low on supplies, and running on a skeleton crew. Your job is to navigate these desperate stragglers across this unfamiliar galaxy whilst collecting resources, encountering alien races, defending yourself from the Skorn, and managing the quality of life of humanity’s last hope to rebuild.

You begin your journey by selecting a crew with various aptitudes across five fields used to improve your chances of passing certain checks for events and combat. You’ll also choose a loadout for your ship, or customise it to suit your specific playstyle. I personally found my crew selection and loadout had little bearing on the outcome of any particular play session; the random nature of the events you’ll run up against almost entirely eliminate the ability to plan effectively. Your best bet is to go as balanced as you possibly can and pray that RNGesus is on your side. 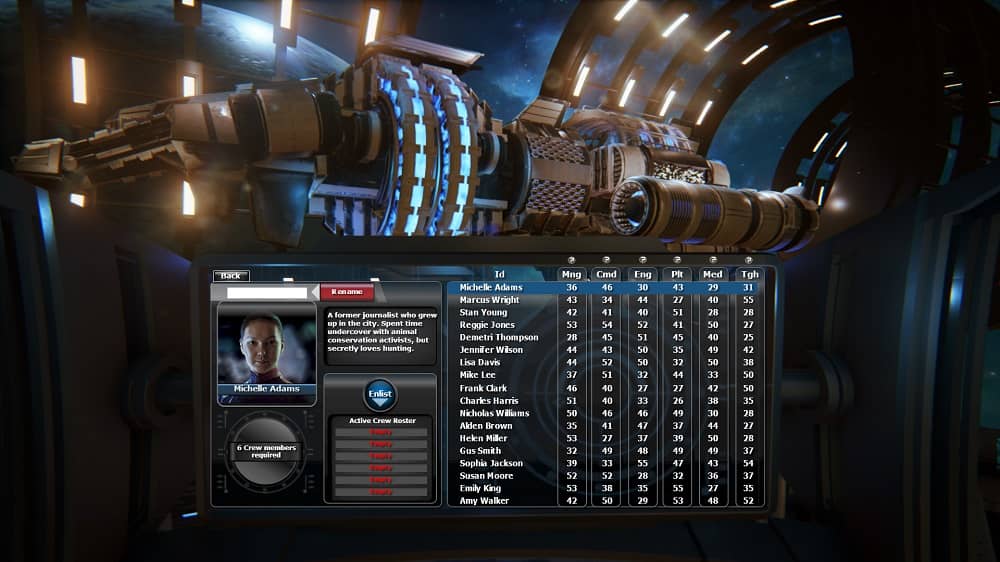 Once you’ve gotten crew and ship selection out of the way, you’re dropped at one side of the galaxy with a little introductory voice over and a couple quick tooltips before you slowly begin to haul your Ark and its population from sector to sector and planet to planet in the hopes that you might reach a habitable planet before you all die of starvation, asphyxiation, or outright destruction. You almost certainly will fail. Into The Stars is one of those games that is meant to beat you more than you beat it, and its random events and unpredictable supply chain will deject and dishearten far more often than they push you on to the next planetary body in hopes that the grass will be greener this time.

All the systems aboard the ark are powered by five key resources that must be collected from the atmosphere and soil of the various planets you travel to. Once you’re in orbit you can send down a shuttle team to explore the surface, drop a mining rig to collect elements from the ground through a simple minigame that gives you some control over your yield, or deploy a drone to automatically collect a smaller supply of resources that you have no control over. Everything outside of the mining minigame is randomised and could yield you anything from a new module that will increase your survivability, to the death of every crew member you sent planetside. The latter certainly seems to come more often than the former. You’re never offered a carrot if you start to fall behind unless the RNG condescends to give you one but the stick comes heavy and often.

Spend too much time in any one space sector and the Skorn will catch on to your presence and either move to intercept or call for reinforcements. Hope for the first because combating a singular Skorn vessel is a relatively trivial task as long as you have the crew members left to fully man your battle stations, but fighting a team of three becomes a game of multitasking and split second timing that the interface isn’t up for.

Combat plays out from a view of the bridge with the Skorn fighter craft looming large on the main screen. To effectively combat them you must watch for the colour of their incoming beam attacks or raised shields and match the color of your own deflectors, lasers, or torpedoes. It’s a system that could be very engaging but fails on almost every conceivable level by falling into dull, repetitive predictability that begins to require more reflex than thought once you get used to it. The whole thing also looks like an early 90’s computerised FMV sequence which is less than thrilling when the Unreal 4 Engine bona fides are taken into consideration. 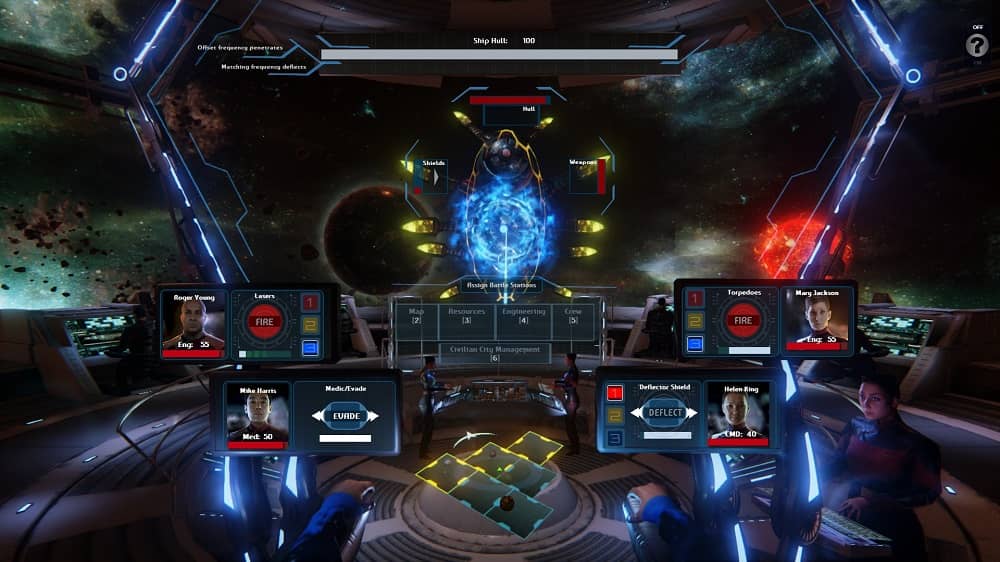 In fact, the ship’s interior design, UI, and all of the in-game cutscenes look uniformly terrible. At any time you can switch from an exterior view of your ship to the crew deck where you will be greeted by a control panel with unimpressive and stylistically inconsistent fonts, terrible 2D art assets, ridiculous and nonsensical load times, Windows scroll bars flashing on the side of the screen, and lazy 3D modeling. Oh, and the in-game cursor is just your regular old mouse cursor and isn’t even hidden when you’re in the exterior ship view. Crew members stand about with blank stares on their waxy faces, poking about at control panels like virgin eunuchs in a dark room blindly groping about for a woman’s g-spot. When your mining rig lands on a planet’s surface you’re treated to three seconds of brown gas gliding by the shuttle’s window without any sense of the literal and figurative atmosphere of the foreign and untamed landscape you’re traveling to.

It’s all so dull and lifeless that it feels like beta assets were left in without any effort at improvement by a design lead whose constant refrain must have been “that’s good enough”.

Even the gameplay feels like an internal effort that wasn’t adequately tested by parties unrelated to the design team. Too much is left unexplained and up to the player’s efforts to decipher. Too much is left to chance or circumstance. Too much is put forth as a functional grain of sand that a little time and polish could have made into a real pearl.

That’s it! There’s my metaphor! Into The Stars is a grain of sand that is constantly reminding me of its desire to be that pearl. I know I’ve spent the majority of this review dumping all over it but I wouldn’t be so harsh if I hadn’t begun to see its potential and, at times, really enjoyed myself.

Alas, in the end, I cannot be expected to make that grain of sand into a pearl myself as my every effort to do so serves to continually irritate my palate instead of stimulate my senses. Into the Stars is a subpar and incomplete product but if you’re the kind of player who has the will to put in a steady investment of time and effort to probe its every nuance and deeper subtlety you might just get that pearl.

Good luck, commander. It’s all you have.

Into the Stars is available on PC.