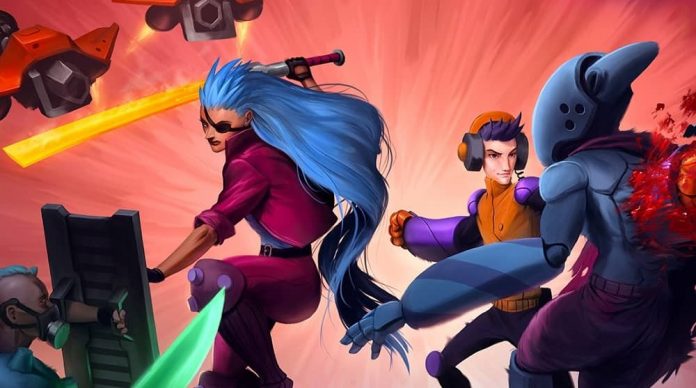 “Oh, boy!” I thought to myself as I perused the description of Pieces Interactive’s brand new overhead arena brawler, Kill To Collect.

“It has 1-4 player co-op! I sure can’t wait to sit down on the couch with my friends and relive those halcyon days of playing smash TV with my friends!” I even had friends to play with this time! Can you imagine?! I was so excited.

Set in a 1980’s style cyberpunk dystopia with a pleasing neon aesthetic and a fantastic synth-pop soundtrack, Kill To Collect makes a great first impression. The basic idea is that you accept a bounty, enter a multi-level, rogue-lite dungeon and progress through each area by battling rooms full of baddies with special abilities, area effect attacks, shields, and other modifiers that you have to strategise to defeat. There’s also a MOBA-style leveling system that allows you to upgrade at special terminals scattered throughout each dungeon, but there’s no persistent progression to speak of outside of a few unlockables that you don’t even select yourself. This all held my attention for the first few bounties before the issues began presenting themselves and from there things went slowly but surely off the rails.

First of all, let’s a have a look at Kill To Collect‘s system requirements: “Microsoft Xbox Controller for Windows (or equivalent) is strongly recommended”. Yeah, I never got any of my controllers working and a keyboard and mouse makes for a lousy experience with a twin stick shooter designed for a controller – but that’s what I was left with.

This deficiency in proper input may have fed directly into my second problem with Kill to Collect: it’s… You know what? Let’s just take a look at that game description again: “GIT GUD AND DIE TRYING”. Yes, Kill To Collect on anything over easy is a brutal, punishing, controller smashing experience. But that’s a game feature now, right? We all like being perpetually frustrated with our entertainment, yeah? In the 15 multiplayer story games I attempted, my teams were never able to get more than a few rooms into each level before getting totally wiped out. This is partially because Kill To Collect ramps up the difficulty in multiplayer, partially because playing at this increased difficulty requires a skill and precision that a bunch of randoms can’t manage on their own, and partially because the kind of players that would seek out a game that advertises itself, unironically, with the asinine phrase “GIT GUD” are the kind of players that refuse to attempt a run on anything other than the highest difficulty. 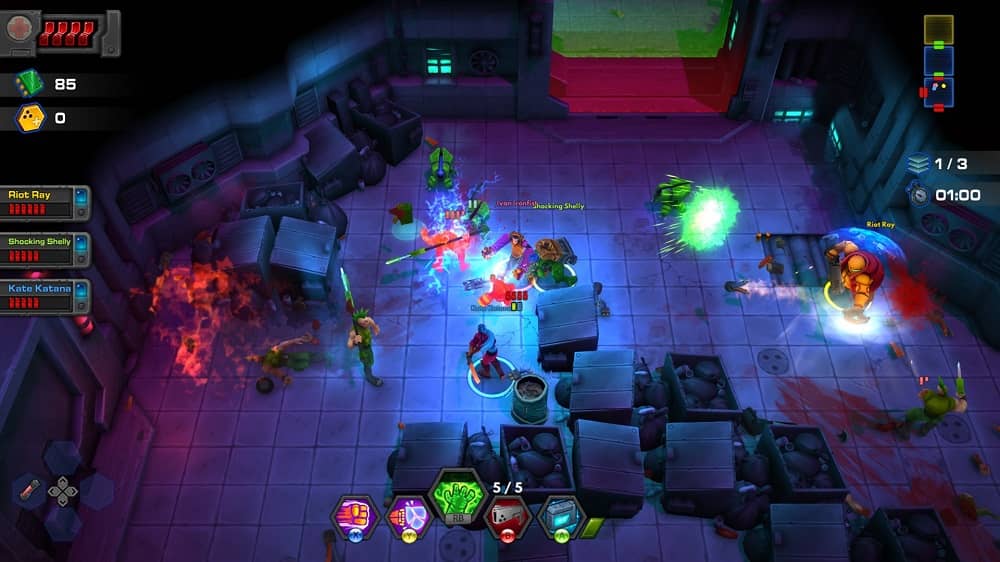 In addition to that, I found the four playable characters you have to choose from to be something less than balanced. In single player Kate Katana made the early levels a cake walk, while using Ivan Ironfist, Riot Ray, or Shocking Shelly made those same levels a slow, grinding battle of attrition that required constant dodging and positioning to get a single shot in on your enemies.

The thing is, I could see all of this being mostly mitigated by allowing a team of friends to play together on a couch, talking out their strategies and working together in real time. This is a single-screen arena brawler, after all, and the exclusion of this feature in favor of online only co-op absolutely baffles me, especially when the mechanics make a well-coordinated team absolutely essential. I’m afraid four copies of this game, a solid internet connection, and independent voice chat is a tall order when I’m just trying to have a good time with my friends.

Assuming you make it through the seven story missions and you have an appetite for more, your only other option (except for repeating those same seven bounties ad nauseam) are the daily one-time and repeatable challenges. The one-time can be attempted only once per day before it goes away and affords you a spot on the ranking board when completed, while the repeatable can be attempted as many times as you want. These challenges both involve a random bounty that has you completing specific objectives against advanced opponents with completely random modifiers on them that can make some rooms literal impossibilities to complete. I honestly don’t believe any thought was given to balance here. Or maybe they just require a full team of incredibly skilled and co-ordinated players to complete, but I wouldn’t know because I was never able to find a multiplayer match with the daily challenges and was instead forced to attempt them on my own. 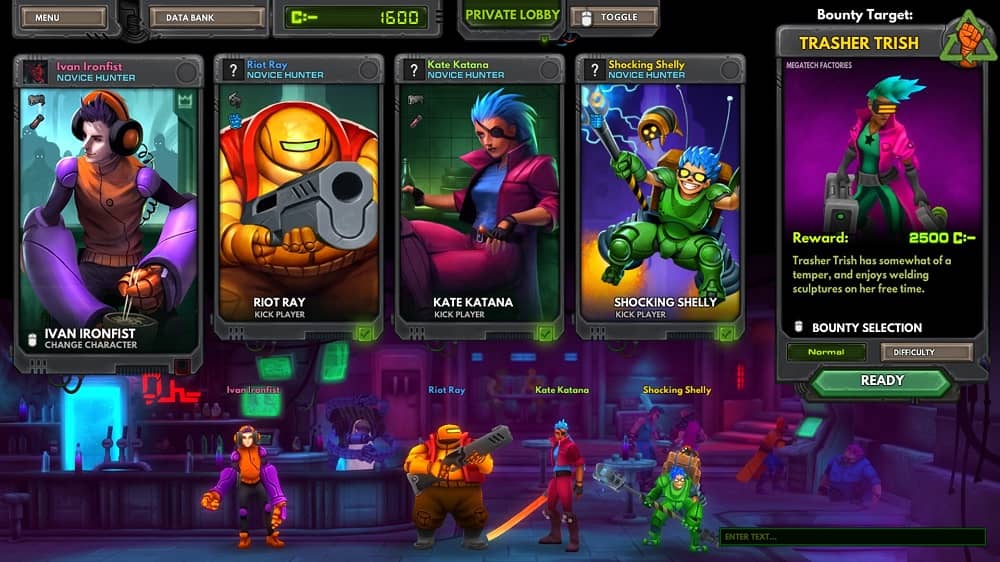 An free update to Kill to Collect called “Warzones” landed on 21 April which claims to offer some more replayability through randomised and remixed versions of the seven core missions, but I’m not sure I can even be bothered. Pieces Interactive wanted their game to beat me and it has. I give up. Good work, guys.

For those of you out there who have friends across the country who are looking for a brutal throwback to the likes of Smash TV and Gauntlet to waste a few hours in, I suppose you could do worse. Just don’t expect too much from Kill To Collect as it’s certain to not deliver.

Kill to Collect is available on PC.