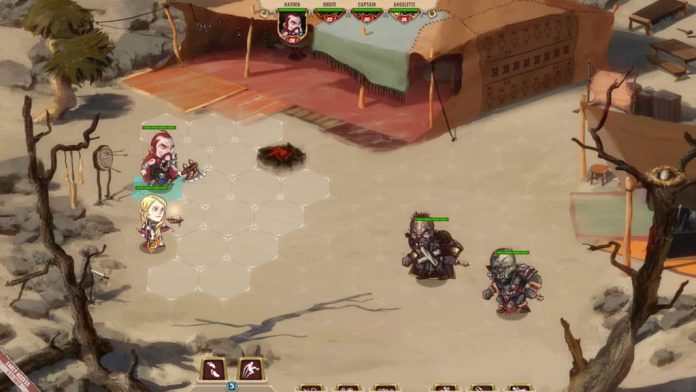 I’m going to come right out and say it: I don’t like roguelikes.

Having to start all over again every time you bite the big one is not something that appeals to me. I’m not the most skillful gamer either, so I tend not to get too far in any roguelike I play. Overfall is a roguelike. I have not completed it. It’s not my favourite game ever. But I just can’t help going back to it…

In my last playthrough, I lasted a little over an hour. I must have sailed to about 50 of Overfall‘s tiny, procedurally generated islands across the world of Dys, encountering friendly and hostile people from this strange world’s warring nations – humans, hollows, elves, dwarves, goblins and forsaken, to name a few. I’ve boarded other people’s ships, I’ve bartered in bazaars, I’ve helped a band of minstrels remember the words to John Lennon’s “Imagine”. I’ve had so many encounters of such variety in story, depth, character, tone and terminal wounding that you’d be forgiven for thinking that developers Pera Games had plundered a whole bookstore’s worth of short story compilations to fill their game with. Then I died when I went up against a group of Everguard that I never stood a chance against. I raged. I quit. Then I went back in, about ten minutes later, for another go.

Overfall is an RPG roguelike, successfully crowdfunded through Kickstarter and now available in Steam Early Access. You start the game with a party of two recent returnees to your homeworld of Dys – a homeworld that has changed considerably in the 300 years since you left through a mysterious portal to another world – and are tasked with finding the Everking who has, inevitably, gone missing. You’re going to need to lead your crew across the vast oceans of Dys, visiting countless little islands, playing through hundreds of individual encounters and either battling or problem-solving your way across the world to find him. You choose the path you want to take and the allies and enemies you want to make – adding members to your crew, building a reputation for yourself and having so much fun you’ll completely forget why you’re doing what you’re doing.

As you’d expect from a roguelike, each playthrough is totally different but, while some roguelikes just change up the dungeon layout or mob placement, Pera Games have managed to fill Overfall with more stories than you can conceivably experience in a single playthrough. Aside from bazaars, taverns and certain ships (where you can level up your skills), each encounter that you come across will present a totally different story – I think, in all my time of playing, I only played through one or two of the same encounters twice. 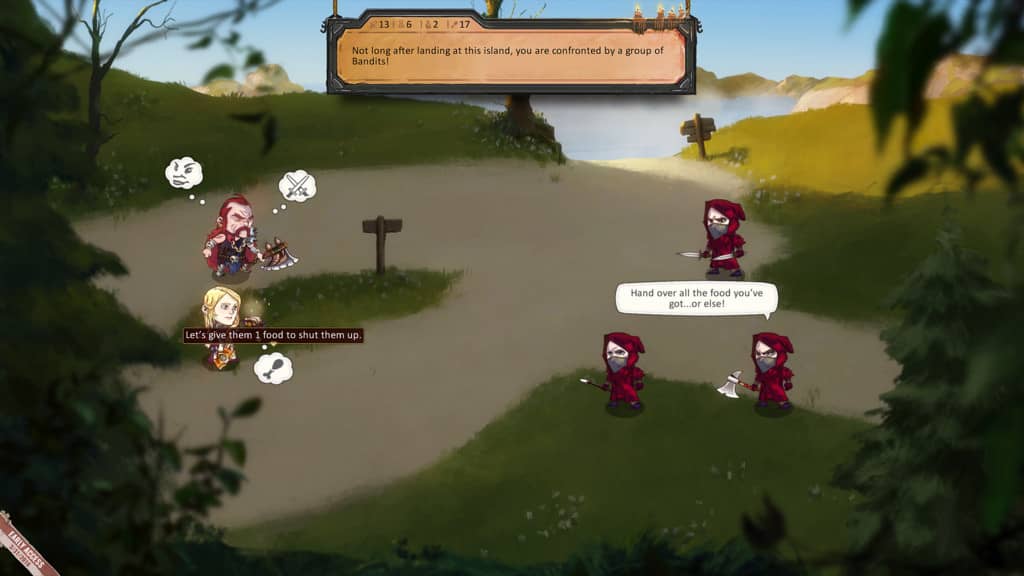 The encounters range from the predictably simple to the ineffably deep to the bizarrely comedic – I wasn’t joking about the John Lennon song. Each encounter is split up into various parts storytelling, dialogue choices, decision making and, if necessary, fighting – though whipping out the blades and offensive spells always feels like the last resort. You often have the ability to use each of your party’s characters to carry on the dialogue with whatever NPCs you find on a particular island or ship and there’s almost always more than just one option available to you.

When it does come down to fighting, though, Overfall doesn’t disappoint. We’re firmly in turn-based territory here, but the three phases each character must go through on their turn – moving, utility/support and attack – coupled with ability cooldowns and the random nature of turn order means that Overfall‘s combat is often rather tactical and you’ll find yourself trying to plan moves and devise strategies several turns in advance. That there are a healthy number of buffs, debuffs, status effects and inherent character attributes to juggle, too, only adds to the depth of strategy in Overfall‘s fighting mechanics.

Completing encounters will, most of the time, net you some loot. This generally takes the form of frags (the universal currency of Dys), dust (which you’ll use for upgrading your skills), runes (for convincing others to join your party) and food (which you use to heal your party members out of combat). Sometimes, though, you’ll have to give up a few items in order to attain a peaceful resolution to a particular encounter. This can often be problematic as the game doesn’t clue you in on just how much of your food that hungry hollow needs or how many frags you’re going to have to give the poor man who wants to impress his new missus.

Unfortunately, that’s not the only problem. Being blissfully unaware of the kind of enemies you’re going to be facing at any given time makes it all too easy to step up and agree to protect the elven merchant caravan, only to be slaughtered when about 30 goblins rock up to kick bottom and make off with the goodies. It’s this reluctance to inform the player that led to most of my misfortunes with Overfall; at one point, I’d given practically all of my food away to some beggar woman (because the game didn’t tell me that she was the one who had been banned from the Pizza Hut all-you-can-eat lunch buffet for clearing them right out of stuffed crust and bacon bits) only to later find that I didn’t have enough food left to heal my cleric, so the next fight saw both of my characters swiftly face down in a puddle of their own blood. Balancing seems to be an issue too: some enemies, who you’d be forgiven for thinking were on their first day of bandit camp, managed to have incredibly powerful attacks and stack debuffs on my guys like nobody’s business while enemy healers often seemed to have the power of Christ at their beck and call, where all I could do was heal a measly 2 HP per turn for 2 turns. 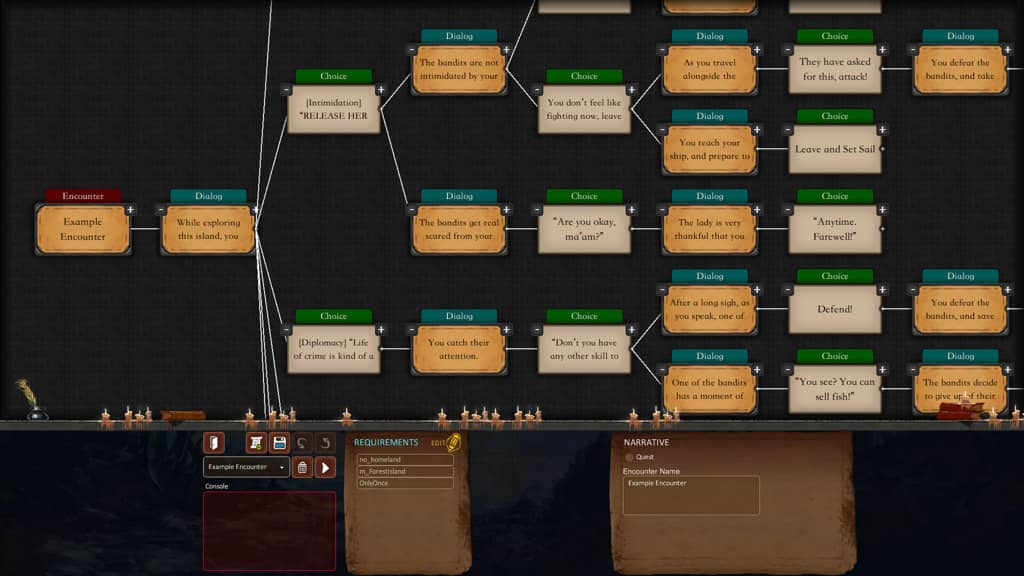 Problems aside, Overfall is great fun to play. There’s something weirdly compelling and moreish about the combination of elements at work. The 2D, cartoony graphics are fun to look at and there’s a great variety of character, NPC, enemy and island models so you won’t often get bored of looking at them. The audio is quite nice and some of the music works well. The stories are where Overfall really shines, though, but I’m not sure why it works. There are pop- (and not so pop-) culture references all over the place – some encounters rely entirely on them (like a Team Rocket encounter that had me laughing my head off and pulling my hair out by turns), for example – and their influences are many and varied. There are stories of great levity and humour, insightful and occasionally moralistic stories, stories that cling to classic fantasy tropes and stories that completely eschew them.

Certainly, if you play for long enough, you’ll start to see the stories come around again but, helpfully, Pera Games and Overfall have you covered there, thanks to their rather wonderful Story Builder. This toolkit, that will probably be nothing at all new to modders or those of us who have ever messed about with RPGMaker or similar, lets you create Overfall-ian encounters of your very own and upload them to the Steam Workshop to share with other players. The kit itself is remarkably extensive and, while easy to use on the surface, could prove to be incredibly deep. It comes complete with a tutorial encounter so that you can see how everything fits together and, after about 10 minutes at it, I was happily toiling away, creating my own bizarre encounter about a man who couldn’t find his shoes and the mischievous goblin who had hidden them (“tee hee!”) at the bottom of an ancient ghoul-filled temple. I wouldn’t be surprised if, days after Overfall‘s release, we get several rambling, epic encounters that rival some early Final Fantasy games – then someone will probably try to remake Dark Souls with it. Oh, and you can bet your bottom there will be zombie encounters, too – and probably a couple from Game of Thrones.

“Overfall is great fun to play. There’s something weirdly compelling and moreish about the combination of elements at work”

While it’s not perfect (it is a roguelike, after all and, if you just don’t like them, it’s unlikely that Overfall will change your mind), Overfall gets many things right. The combat is interesting and tactical, the graphics are fun to look at and it sounds pretty good, the world never gets old and the encounters are always interesting. For me, the best part is the fact that you often have an alternative to fighting – there’s generally some way to resolve situations peacefully and still get rewarded (even if, at the end of it, you get rewarded with another engaging round of combat): it’s a little bit Undertale and that’s always a little bit great. If you’re even a little bit into roguelikes and are fond of fantasy RPGs, you probably won’t go wrong dropping a few quid on Overfall: even in Early Access it feels quite polished and practically complete, so expect to see the full release relatively soon.

For myself, I’m off to see about getting this goblin to give me back my shoes…

Overfall is currently in Early Access and is available on PC.