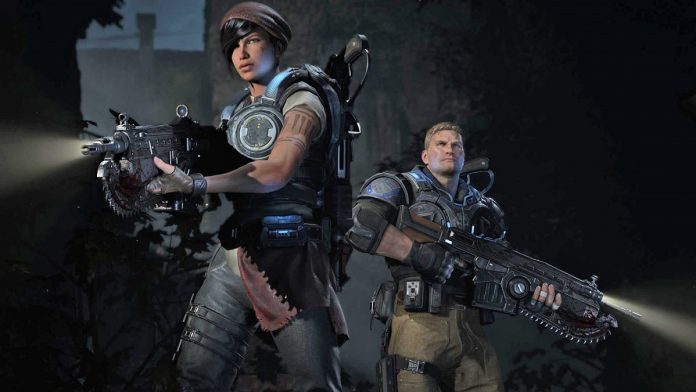 To Disturbed’s rendition of ‘The Sound of Silence’, main protagonist JD Fenix runs for his life as he’s pursued by a terrifying new threat.

Set 25 years after the events of Gears of War 3 and the defeat of the Locust, Sera finds itself overrun with a completely new enemy. The Gears franchise has been synonymous with emotional teasers and the first saw Marcus Fenix running blindly to the haunting Mad World by Gary Jules. So it’s no surprise that the latest Gears of War 4 trailer adopts a similar theme, hitting us with goose bumps in one swift cinematic.

The trailer immediately plunges us into a much darker universe as we see JD Fenix scrambling his way through a densely packed forest. He’s being hunted by new enemies that belong to The Swarm as he quickly snaps round and fires off some rounds. The Lancer’s familiar clatter rattles off into the distance as we witness flashbacks to Marcus and Anya living a much quieter life. They’re planting a tree as their son, a little JD Fenix, playfully runs towards his father in a shot that mirrors JD’s present dash for survival. It was at this point when it became so emotionally charged that my eyes started watering of their own accord, as Marcus is seen carving the initials JD into the tree having planted it. Quickly flashing back to JD, it shows him breaking into the same clearing that he once spent time in many years ago with his mother and father. He hops over and slumps against a fallen tree to catch his breath momentarily, before he’s suddenly attacked from above by another enemy. As he raises his Lancer and fires off some shots in retaliation, the flashes of light reveal the initials JDF carved into the tree he’s just used as cover. The trailer then fades to black and the slogan, ‘The Nightmare Reborn’ surfaces and disappears.

Why did I react so strongly to Marcus carving the initials JD into the tree? It was the fact he was using his friend Dom’s knife to do so. If you’ve played through the franchise you’ll know.

The trailer is also named ‘Tomorrow’, which is apt, considering that Gears of War 3 ended with the theme song, ‘Finally a Tomorrow’ by Steve Jablonsky. Whilst Anya and Marcus rebuilt their lives on a homestead, little did they know what tomorrow would bring.

Ultimately, as a huge fan of the franchise, I’m beginning to shed my scepticism. Before this trailer and before all the growing coverage, I couldn’t convince myself that Gears of War had anything left. Having come to a conclusion in Gears of War 3, the beloved franchise was then desecrated by Gears of War Judgement and marred by its sloppy execution and glaringly obvious money-grabbing agenda. It wasn’t what fans had hoped for, and it effectively rang the death knell for the series. So when Gears of War 4‘s announcement and gameplay came along, I didn’t really buy it. “Please just stop” and “Stop” kept springing to mind as I yawned my way through the E3 set pieces. But less than a year later, with all these little details, screenshots and a trailer that goes back to its roots; Rod Fergusson’s Coalition have definitely brought my interest bubbling back up to the surface, and my goose bumps still haven’t subsided.