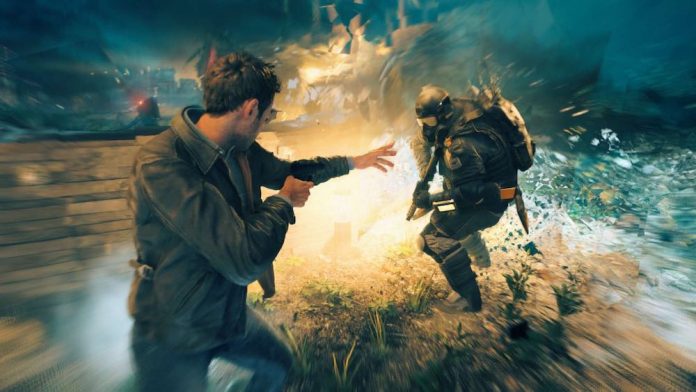 With Max Payne and Alan Wake, Finnish developer Remedy Entertainment proved that by marrying a gripping story with stylish third-person gunplay they could craft something very special indeed.

It helps that as technical pioneers and founders of what would eventually become one of the most popular PC benchmarking utilities ever, 3DMark, they push themselves to fully realise their creative vision, ensuring that their games don’t only play well but also raise the bar as to what we should expect from in-game visuals and effects. Now, after being teased just shy of three years ago at the Xbox One reveal event, Remedy are set to wow gamers with their ability to craft tangible worlds with a strong narrative force and thrilling gameplay yet again. Yup, Quantum Break is finally here. And it was definitely worth the wait.

Unless you’ve been hiding in a shell or blindfolded for the last three years, you’ll be fully aware that ever since we caught a glimpse of Quantum Break it’s been touted as the title to really show what the Xbox One is capable of. A technical “tour de force” if you will. It’s kind of ironic then, that initially, you’ll possibly be quite underwhelmed, or dare I say, even disappointed, with Quantum Break’s visual presentation. You see, being rendered at 720p before a fancy technique called Temporal Reconstruction takes the image and adds all manner of extra detail and high quality multi-sampling anti-aliasing into the equation, the image during gameplay can appear a little soft and blurry. Not only that, but in bright scenes, a small amount of ghosting is evident as you pan the camera around the main character, and throughout the whole game the shadows are rather edgy. You may wonder then, when most high profile games on the Xbox One run at 900p at least, why Remedy have opted for their unique approach to render the game, although the answer to such question is simple: even with these issues taken into account, Quantum Break is still the best looking game on Xbox One.

Whilst the visuals are undoubtedly softer than what they would have been with a native 1080p output, Remedy’s Temporal Reconstruction technique creates an image that is more detailed and crisper than a standard 720p display, and in motion, it’s hard to tell the difference. The real benefit though, is that it allows Quantum Break’s gameplay to remain smooth from beginning to end, which is no mean feat considering the special effects employed and the dynamism of the environments. For a start, the quality of the animation is superb, especially with regards to characters’ faces; their mouths move and muscles work to express feelings even during gameplay unlike any other game I’ve played. Nothing will prepare you for the sheer joy however that is your ability to manipulate time; not only because it’s a great gameplay tool, but also because of the gorgeous visual effects that it brings to the table and how it enables you to affect the game’s world. 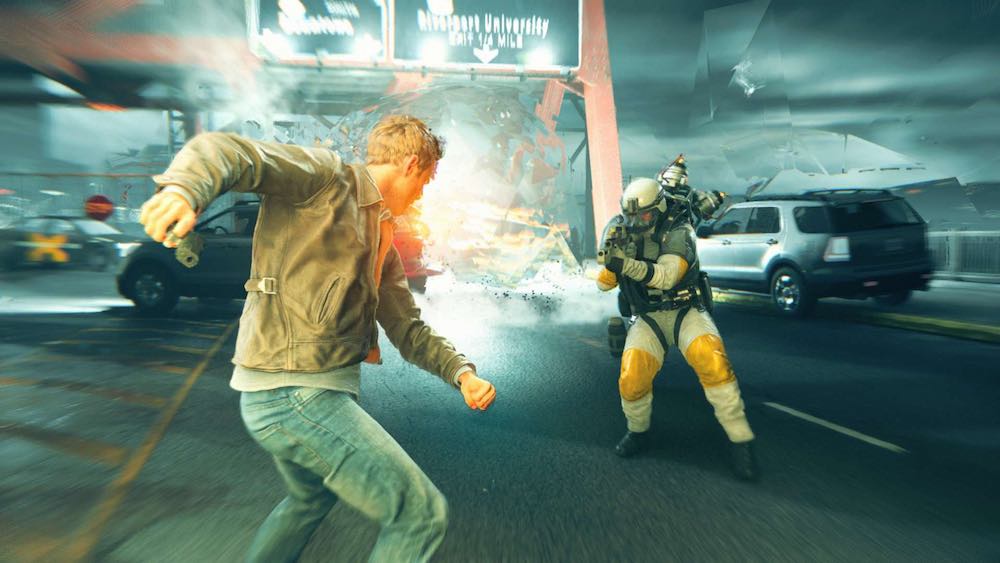 Mainly of use in battle, Quantum Break’s time control powers bolster what is already solid third-person shooter gameplay to create an experience that is genuinely unique. Playing as Jack Joyce (The Following’s Shawn Ashmore), just a regular guy drawn into a literal race against time after agreeing to help out his old friend Paul Serene (Game of Thrones’ Little Finger), Quantum Break drip feeds its pool of time control abilities to you, enabling you to get to grips with each of them piecemeal to ensure you know when is best to use them and how. The abilities on offer include delights such as the capability to temporarily freeze enemies in place, allowing you to take them out of the fight for a few seconds while you deal with a more prominent threat or pile up a barrage of bullets to assault them when time resumes. If that doesn’t float your boat then there’s the ability to run at super speed, ending your sprint with a punch bolstered by the power of time itself.

Overall six time control powers are available in the game including the two I’ve mentioned, and whilst mastering their use is not only fun but essential to you surviving in combat, the special effects that accompany them will often make your jaw drop. Environments bend and warp before your eyes, trails from bullets light up like orange neon signs, and particles from debris caught in the crossfire litter the air. Quantum Break isn’t just satisfied with pleasing your mind with its absorbing gunplay and clever enemy AI that actively takes cover and flanks you when necessary; it also revels in pleasing your eyes whilst it’s doing it.

As satisfying as the combat is with its assortment of time control abilities, meaty sounding guns and ample variety of enemies, if that’s all Quantum Break had to throw at you during its running time it would burn out pretty fast. It’s a good job then that the game is excellently paced, with periods of storytelling and exploration to pad out the experience and add some much-needed variety to the gameplay. The environments of Quantum Break are what you could typically describe as being as dull as dishwater for the most part – a university campus, an office complex and a disused swimming centre, to name a few – but surprisingly, they never are. The sheer detail in every locale brings them to life, and with time fracturing around you, you’re often in situations where the environment is as hostile as the enemies are, requiring you to use your time control abilities to ensure safe passage or access new areas. There are also other occasions where stutters in time will result in some spectacular looking events and views, making ordinary locations extraordinary.  With a large number of collectibles to find throughout the game you’ll want to explore every nook and cranny of Quantum Break’s environments too, even if only to expand upon the engrossing story by reading the many memos and emails that give you a glimpse into each character’s motives. The collectible finding doesn’t simply boil down to just finding documents to read either; you’ll also find videos, intel items, and more importantly chronon particles that allow you to upgrade your time control abilities to give you the upper hand in combat. 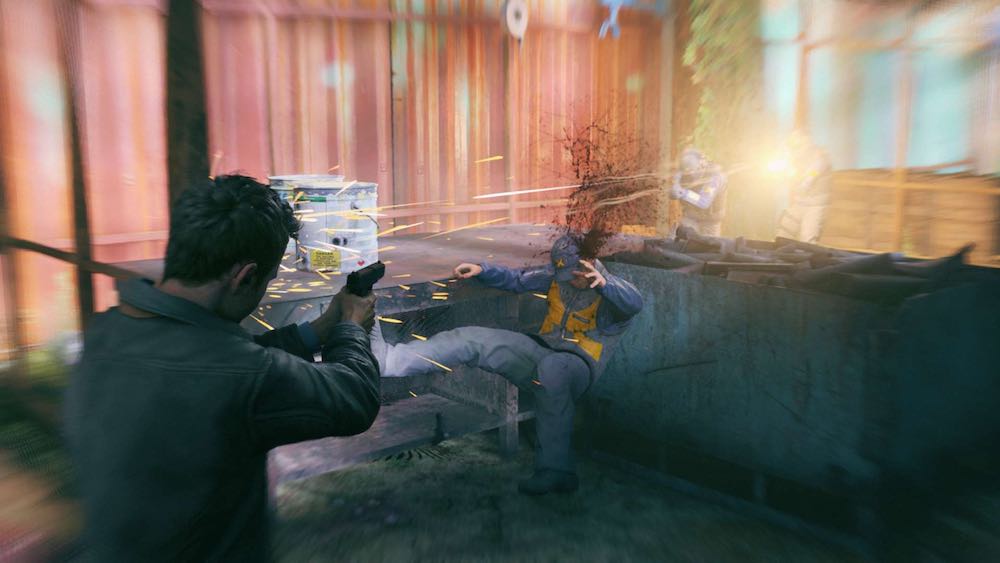 Perhaps the most ambitious and revolutionary aspect of Quantum Break however, is not its time control abilities or technically impressive visual effects, but is in fact its story, or rather how it blends a live action video series into the game. Spread over five episodes each consisting of three acts, the story of Quantum Break is not set in stone; you are able to affect it somewhat by the decisions you make at junction points. Putting you in control of the villain, Paul Serene, these points shape how he runs the Monarch Corporation, in turn changing certain in-game events as well as heavily altering the video sequences between each episode that focus on the organisation and its notable employees. With hours of high quality video footage however comes a huge amount of data – 75gb of it in fact – meaning that the unless you have the required bandwidth to adequately stream each sequence as you watch, you’ll have to download them all in one go. Obviously if you’ve got an internet connection so bad that you can’t reliably stream, downloading 75gb is possibly going to be equally troublesome, but it is worth the effort as the videos are well directed and add a lot to the game’s story. If you can’t or won’t download them for some reason, fear not; you can complete Quantum Break without ever watching a minute of them and still get a good enough grasp of the overall story for it to be enjoyable.

Being a stickler for finding collectibles, my first thorough play through of Quantum Break including watching all the video sequences  took around 15 hours on normal difficulty, which to be honest wasn’t very challenging. When you consider the hard difficulty as well as all the possible junction options and how they affect the game however, there’s still plenty to see and do after you’ve completed it for the first time. My only gripe is the absence of some kind of instant action mode, allowing you to quickly engage in battle with your upgraded time control abilities when you just want that quick rush of excitement.

If I was being nit-picky, I could state that the ending is perhaps a bit of an anti-climax that leaves the gate wide open for either a sequel or DLC, or that the load times are rather long should you choose to skip an in-game cutscene, but being sensible, it’s hard to find any real faults with Quantum Break. Sure, its unique approach to achieving its stunning visuals results in some minor graphical issues, and streaming or downloading a huge amount of video data may not be an option for all, but they don’t diminish what is otherwise an assuredly ambitious game with exceptional pacing and gameplay. With Quantum Break, Remedy proves that they truly are the masters of the story-driven third person shooter genre, and you’d be a fool to pass on the chance to relish its remarkable time control abilities and engaging variable storyline. This is the game that Xbox One owners have been waiting for, and there’s little chance that they will be left disappointed.

Quantum Break is available for Xbox One and PC. We reviewed the Xbox One version. 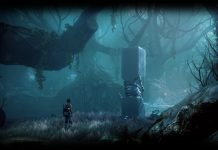