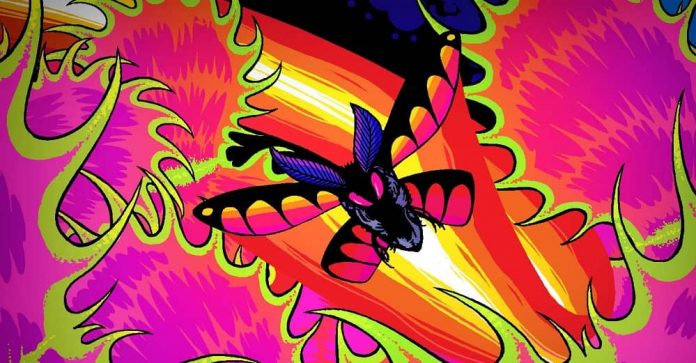 The independent game scene has seen a lot of nostalgic throwbacks as of late.

It’s not a stretch to call them a cliché at this point. However, the recent Steam Greenlight success Space Moth DX proves that imitation is the sincerest form of flattery. A surprisingly earnest throwback to the vertical scrolling bullet hells of yesteryear, you fight all sorts of insects in your journey traveling to… the moon?

It would be disingenuous to call this game anything but bizarre. A visually explosive and hyper stylized shooter, Space Moth DX feels like a classic game from Treasure that somehow smashed into a 30-year-old arcade machine. The game’s outlandish premise plays itself completely straight, distancing itself from itself from its quirky themes. You find yourself placed into the role of the titular Space Moth as you fight wave after wave of incoming insect armadas. The 30 plus enemies range in size and capability as you go up against everything from butterflies to giant beetles. The plot, as it should be, is paper thin. No scrawling text of exposition slows you down by trying to explain the already odd circumstances. The game simply drops you directly into the action on the word “go”.

The mechanics are simplistic, shying away from the more adventurous bullet-hells that have paved the way since the genre’s inception. It sticks to the early roots by being immediately understandable. With the game’s feverish difficulty, Space Moth DX isn’t worried of scaring any players off and takes a “get good or die” approach to its design. A constant assault of enemies forces you to focus on your own position instead of your enemies, similar to many other games of the genre. 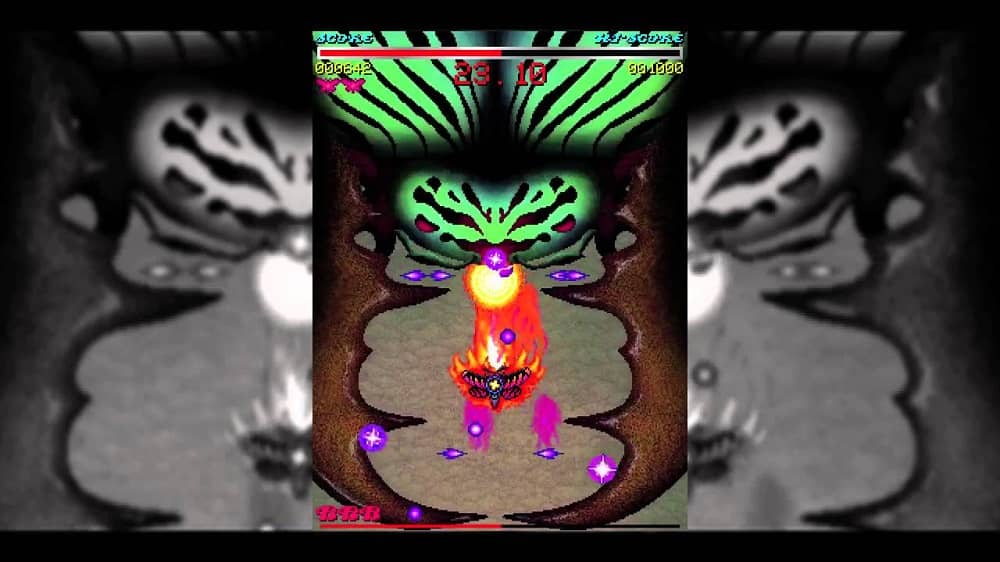 The difference with Space Moth DX  however is that it narrows your hitbox to a small point in the centre of your moth, designated by a sparkling sprite as opposed to the entire moth itself. This means you can let bullets graze your wings without worry, as long as the shining centre is left untouched. It’s an interesting twist on the core of most bullet-hell games which will take some time to get adjusted to; yet without any power-ups in the entire game there isn’t any sense of progression. There are only three weapons available to you from the onset of the game: a laser, a rapid shot, and a bomb attack, leaving little variation. Instead of providing multiple upgrades to help give you the edge, it uses save states at the beginning of each level as a concession, reloading everything you had at the beginning of the level if you are caught in a fail state. In the early moments of the game it feels fair, giving rise to tension the further in a level you get. However later in the game when enemy attacks begin to get far more complicated it feels more like a way to arbitrarily extend the playtime.

That’s not to say there isn’t any depth to the game’s design. Space Moth DX presents a classic high-score system which on its own seems fairly pejorative, yet thanks to the ability to “soul drain” enemies it creates a clever system of balancing risk and reward as you play. By “soul draining” an enemy, you force them to be more aggressive and upon destroying them they yield higher points. It’s a great system for returning players to use as they chase a higher and higher score count. With two difficulty modes packed in the game offers a solid amount of variety for being a simple scrolling shooter, yet falls short of being anything substantially satisfying.

While the mechanics of the game don’t offer anything particularly original, the style and tone however seem wholly unique. Visually surreal, it feels like the cover art of an Atari 2600 game brought to life. The pixel art on display feels more genuine to the era, directly emulating sprites of the time. The effect is an art-style ripped right out of the 80’s. There is even a setting to add scanlines for the ultimate nostalgia chasers out there. It however makes it all the more frustrating as you fly through these gorgeously drawn levels only to be fixated on the massive amount of purple colored orbs on screen like some sort of kaleidoscope of horror. 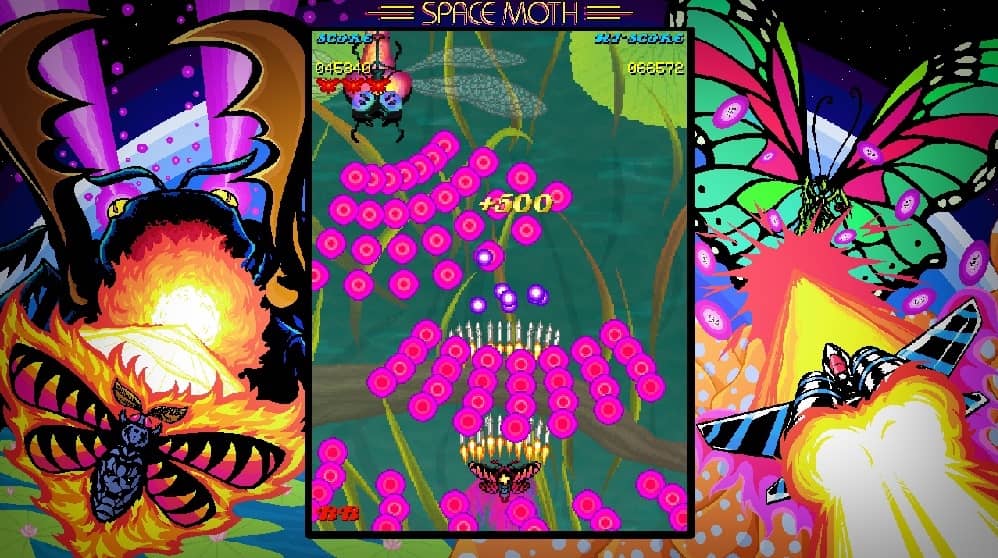 The music in the game is another awkwardly dim note. While it’s admirable that the game continues to be unique by implementing a prog-rock inspired soundtrack, the slow tunes feel out of place in a game that’s as brutal and fast paced as this. With so many things on screen to pay attention to the music is joltingly contradictory. Where a kinetic and up-beat accompaniment would be fitting, it instead sounds like a stoner’s garage band demo tape. Couple this with almost non-existent sound effects and the game winds up losing any momentum quickly, which is the last thing you’d expect from a game about a laser-shooting insects.

While Space Moth DX fails at being a memorable experience, it is undoubtedly an earnest love letter to the genre from two people that truly have a passion for it. 1CC’s commitment to their vision often rivals that of larger titles, even on occasion out performing them. A unique art style and notable attention to detail prove that this is a project with a lot of love behind it. However, due to confusing design decisions and a lack of pulse-pounding action it loses control fast. Depressingly the game is never able to grow out of the cocoon it lingers in, instead feeling more like a Space Larvae than a Space Moth. It is a showcase of what could have been inside a lacklustre and ultimately disappointing shooter.