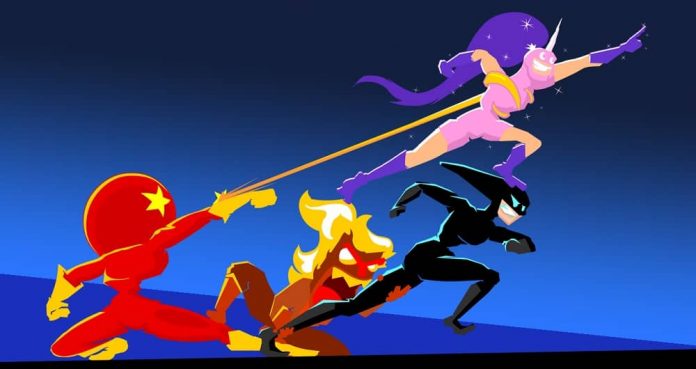 After three years of being in beta, the platform-runner from DoubleDutch Games, Speedrunners has finally been fully released. And it was worth the wait!

Initially released in August of 2013 onto Steam’s Early Access program, Speedrunners showed promise in offering a unique multiplayer style of having to force your opponents off-screen to win. It was simple, of course: pick one of the characters, run around a map, dodge traps, use powerups and win. No fancy bells and whistles.

When the first of the four runners hits the far edge of the screen, they’re eliminated and a “countdown” takes effect; the screen slowly gets smaller and smaller until it’s a mere few inches wide, increasing the chances of being left behind and eliminated until only one remains. Forcing the screen to shrink causes a much more intense game as it urges people lagging behind to catch up while those ahead may get complacent and slip up.

A big change from the Early Access version to the full release of Speedrunners is a focus on single player content, which has been done by adding a story mode. Now, I know what you’re thinking; a “story” mode in a simple, racing platformer? What could the story be? Well, I’ll tell you. You’re the eponymous Speedrunner character and the story simply comprises of you coming across the different characters, challenging you to battles of speed. Reward? You get a short little “comic book” detailing the challenger’s motives and how they seek you out. The main focus of the game remains in the multiplayer racing, but it adds a nice distraction and is a solid introduction to the game for those who haven’t played before. 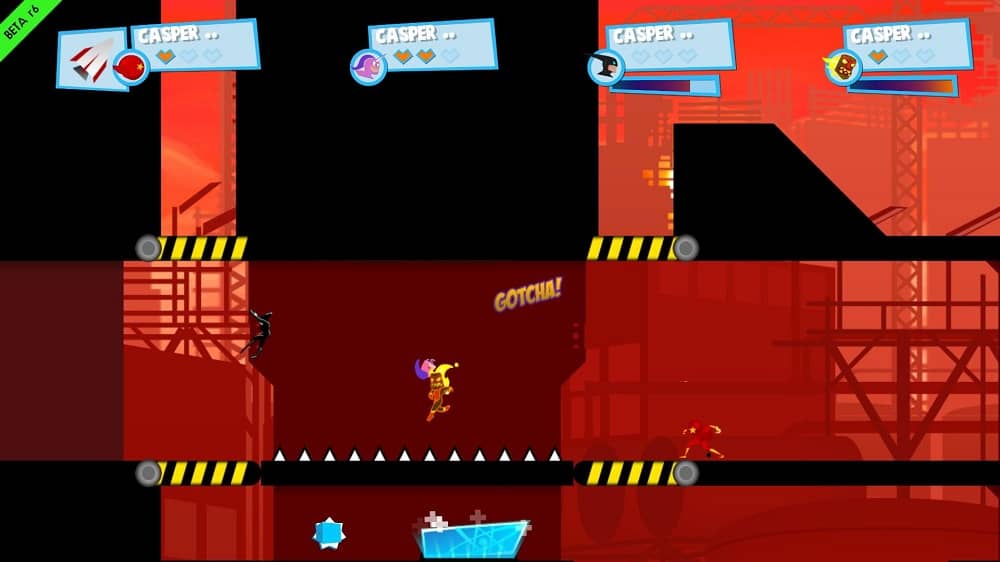 Understandably after three years in public development, Speedrunners has undergone a lot of changes and improvements throughout its various versions. More characters were released, including avatars from famous YouTubers, such as like Dodger, UberHaxorNova, Markiplier, PewDiePie and several others. The Steam Workshop has expanded as DoubleDutch have allowed the creation of your own levels and maps to challenge your friends and others online. As expected of any game that allows user-created levels, there’s a mixture of brilliantly-designed levels and levels that looks like they were designed by someone who prefers red wax crayons as their primary medium. I, personally, am dreadful at it, but for the more creative types, the level editor is a nice addition and could potentially provide hours of fun.

Another thing that you can create in Speedrunners is “trails”.  Trails are generated when you activate a speed buff. Some are simple colourful trails, some have been designed to encompass the entire body – like a long dragon. Being able to adjust this is a brilliant way to allow players to add their own personality and stand out in a race – a unique marker.

Now, imagine taking Mario Kart’s power-up system and incorporating it into a high-speed platform game. That’s what you get with SpeedRunners. As you run, you get the opportunity to pick up various weapons and traps in order to ruin your opponents’ chances at winning. This cut-throat collection of toys to use against your fellows is a blessing and a curse – they’re fun to use and help yourself win, but they can also hinder you if you use them at the wrong times. I, myself, have accidentally blown myself up with my own missile on more than one occasion. 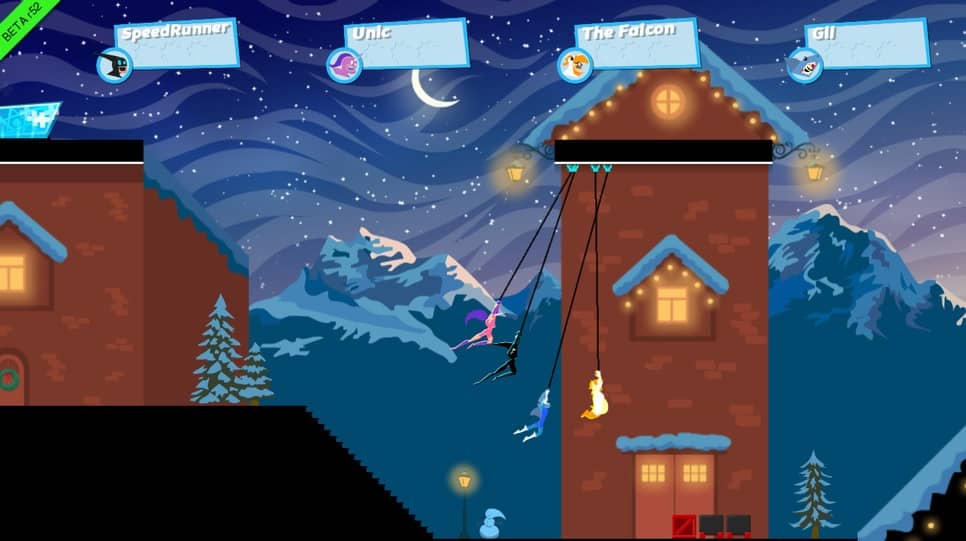 Playing with others can be both local and online, or even against bots if you prefer a solo experience – though the game is most fun when playing against others. Let it be known, though, that this game is extremely competitive and, as I have experienced, some friends will take it too seriously and may come to resent you if you continually beat them! Oh well, that’s what’s online play is for; nothing’s more entertaining than beating down strangers on the internet!

The music in Speedrunners is peppy, upbeat and very suited to the fast-paced action. As mentioned previously, when the first person to hit the screen edge it starts a countdown and slowly shrinks the screen, forcing the game to end sooner. At this point, the music changes and becomes much more dramatic, fittingly adding to the nerve-wracking countdown. The graphics, though 2D, are stylised in a way that make the game more visually attractive than other platformers who try and force 3D graphics. The advantage of this, of course, means content is easily created by both the developers and users. The graphics tie in well with the animation and the controls as both are very smooth and responsive. Speedrunners, of course, has full controller support, so those who prefer the handheld over the desktop can have an easier time with the game.

There’s very little negative to say about Speedrunners. It may be simple, but it has plenty to offer thanks to its addictive gameplay, and its welcome addition of level creation makes for nearly endless replayability. Speedrunners is definitely a must-have game if you want something light-hearted to play with friends, or even make friends with online matches. Three years in beta, DoubleDutch Games have done a good job!

Speedrunners is available on PC.