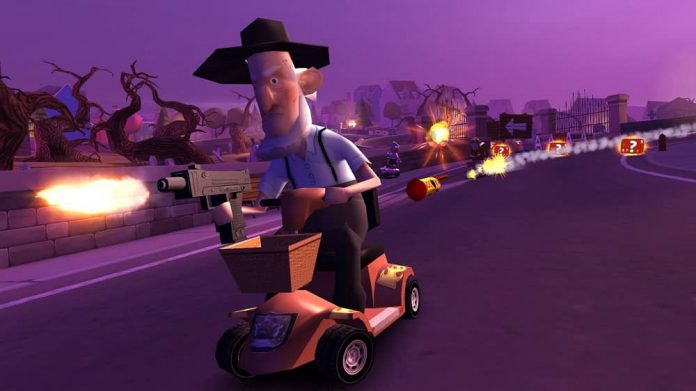 It’s a shame, because there’s nothing quite like the light-hearted yet highly competitive nature of an addictive, simple racer. MilkyTea Studios have attempted to rectify that with Coffin Dodgers, a humorous take on the kart racing genre with a geriatric twist. Unfortunately, there’s still a distinct lack of decent karting games on current gen consoles.

I’m just going to lay it out on the table: Coffin Dodgers is not a good game. From its graphics to its audio; from the gameplay to the story, Coffin Dodgers misses the mark in almost every way. Despite that, however, it is still somehow kind of fun to play.

When you first launch Coffin Dodgers, you’ll be met with an opening cutscene that explains the premise of the game. A group of pensioners are being stalked by the Grim Reaper, who thinks it’s about time they began their descent into the underworld. However, these old folks aren’t going to give up without a fight, and so together they come up with the idea of facing off against Grim himself in a series of karting events. I mean, how else are you meant to fend off Death? With the winner getting to hang onto their mortal coil whilst the losers have their souls reaped right out of their old, frail bodies, off to their garages they go to pimp their mobility scooters.

It’s immediate from the get-go that Coffin Dodgers doesn’t take itself too seriously, and it’s that tongue-in cheek humour that allows you to overlook the glaring technical issues that plague the game. Coffin Dodgers puts silliness before everything else, and whilst it makes for an enjoyable few hours, unfortunately this reliance on silliness alone isn’t enough to make a game “good”. 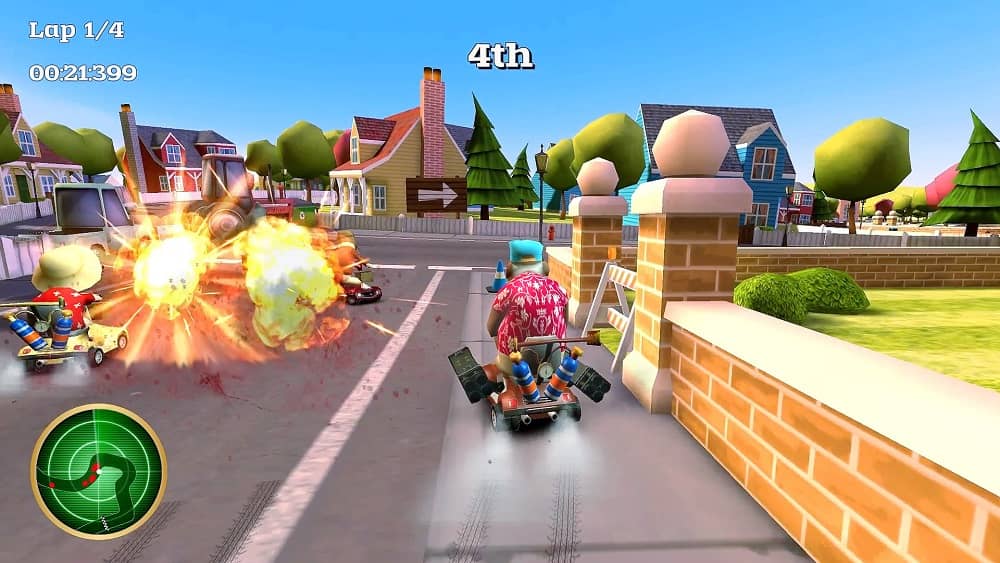 The graphics, you’ll quickly realise, are rather awful. The art style itself is a somewhat pleasant 3D cartoon, with vivid colours and bold, blocky textures. Unfortunately, the overall presentation looks like something from the early archives of your Xbox 360, not a current gen title. The locations on offer are bland and repetitive. The area that the game takes place in is fairly compact, and as a result most tracks tend to be a variation of the same few routes.

The main substance of Coffin Dodgers comes in the form of the single player story mode which takes you through four different tournaments, each comprising three races, culminating in a final showdown. Each race pits you against seven other racers (your geriatric companions and Grim Reaper). You don’t have to win each race to progress; qualifying in the top three will do it – but you will have to win the last race in order to win the game. It’s worth noting that after each race you get the chance to retry, but should you continue onto the next, you can’t go back to improve your performance without starting the whole game over again.

In true karting game style, there are various weapon and boost pick-ups to collect as you make your way around the track. You also have a melee attack to ward off your rivals with (a walking stick to do some literal granny-bashing with, of course). After completing each race in the story mode, you’ll be awarded coins which can be spent on upgrading your mobility scooter and improving your melee attack. The ability to upgrade adds some much-needed depth to the game, but unfortunately the upgrades on offer are rather basic, such as the usual speed and acceleration improvements, and a few choices of paint jobs. You’ll not really feel much benefit after upgrading either, as the boosts in speed never feel noticeable. 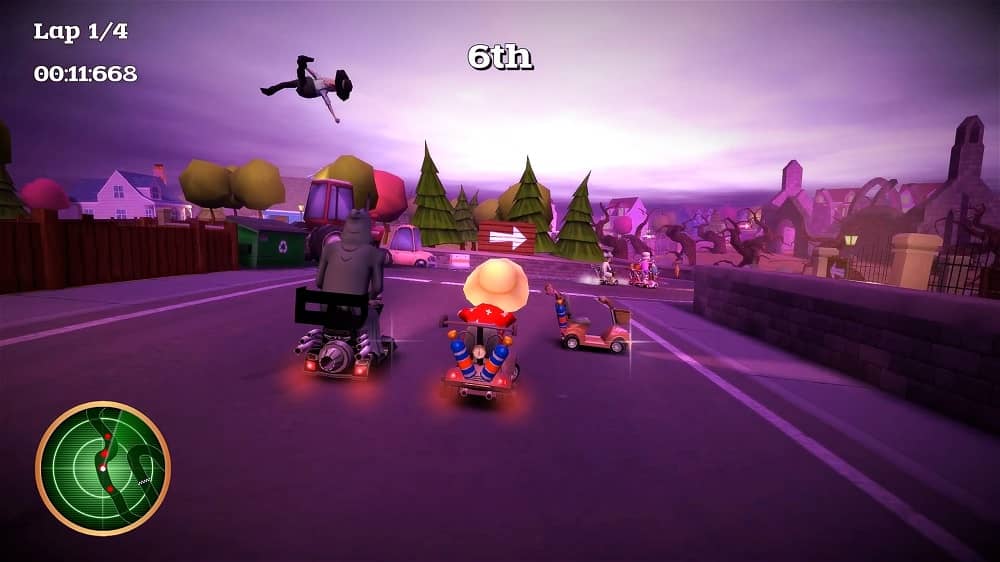 Perhaps the biggest problem with Coffin Dodgers’ gameplay is its brevity. It will take you no more than 90 minutes to complete the main story mode (likely much less if you’re pretty skilled at racers), and outside of that, there isn’t much else to do. Completing the campaign will unlock the ability to play as the Grim Reaper, so if trophies/achievements are your thing, then you might be inclined to play through again with a new character, but outside of that you’ll likely find yourself at a loss. If you’ve got friends over, you can give the up to four-player split screen multiplayer a go, but the few tracks and lack of variety on offer will mean that your fun is limited there, too. “Crazy Granddad” mode attempts to offer something unique: the goal here is to whizz around an open world map to collect various items before the time runs out. It’s a fun idea, but you’ll likely have had more than enough of this after five minutes.

It’s hard to recommend Coffin Dodgers to anybody but the most ardent karting game fan who’s desperate for a new title. The poor graphical presentation coupled with the lack of content and replay value means that it isn’t worth the £10 asking price, but if you catch it on sale then you’ll probably get a couple hours of light entertainment out of it. For everyone else, it’s best to leave this one to the Grim Reaper whilst we wait patiently for a better karting game to come along.

Coffin Dodgers is available on PC, PS4 and Xbox One. This review is based on the Xbox One version.