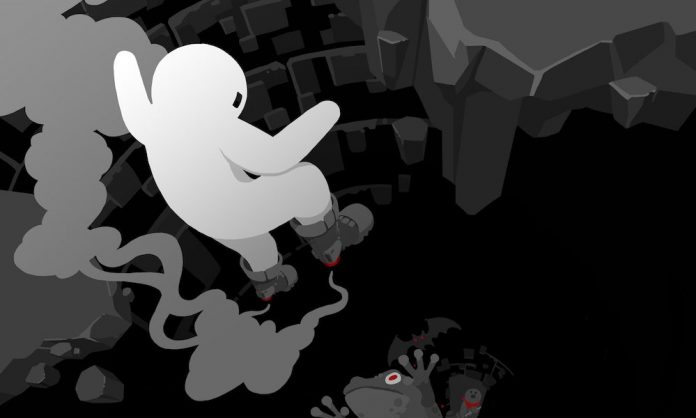 The year is 1989. Nintendo have just released their flagship handheld device, the Game Boy in all its monochrome glory.

Downwell, a game about falling down a well, has just been released to critical accl-… wait, what? You’re telling me it’s not 1989? Are you sure? Then why does Downwell have no colours? Where’s the multi-layered soundtrack, complicated overarching narrative and 3D graphics?

No, apparently it’s not 1989. There’s no need to adjust your TV sets or your calendars; it’s still 2016, but Downwell is well and truly a throwback to the age of monochromatic video gaming. Originally released in 2015 on mobile and PC, it’s now available on PS4 and it’s here to remind us that a game doesn’t need to feature any fancy modern technology in order to be good. Sometimes solid, enjoyable gameplay is all that matters and Downwell sings that tune loud and proud; as the old adage goes, we should never judge a book by its cover.

I’ll admit that when I first laid eyes on Downwell, my heart dropped a little. Maybe I’m shallow; maybe I’m a little too quick to make assumptions based on appearances, but I’ve never been a big fan of  retro revival games. There’s all too many games stylised to look like some 16-bit pixellated throwback to the early 90s. I’m a woman of the times, and I’d rather see my console be pushed to its limits with some groundbreaking graphical advancement of the 21st century. And Downwell is probably the most retro-looking game that’s been released this side of the turn of the century. But you know what? It doesn’t matter that it’s not coated in a 1080p hyper-colourful veneer. It doesn’t matter that the character you control isn’t a realistic looking 3D character rendered with motion capture. It doesn’t matter about any of that for one simple reason: Downwell doesn’t need any modern touches or any fancy gimmicks; it’s still addictive as all fiery hell. 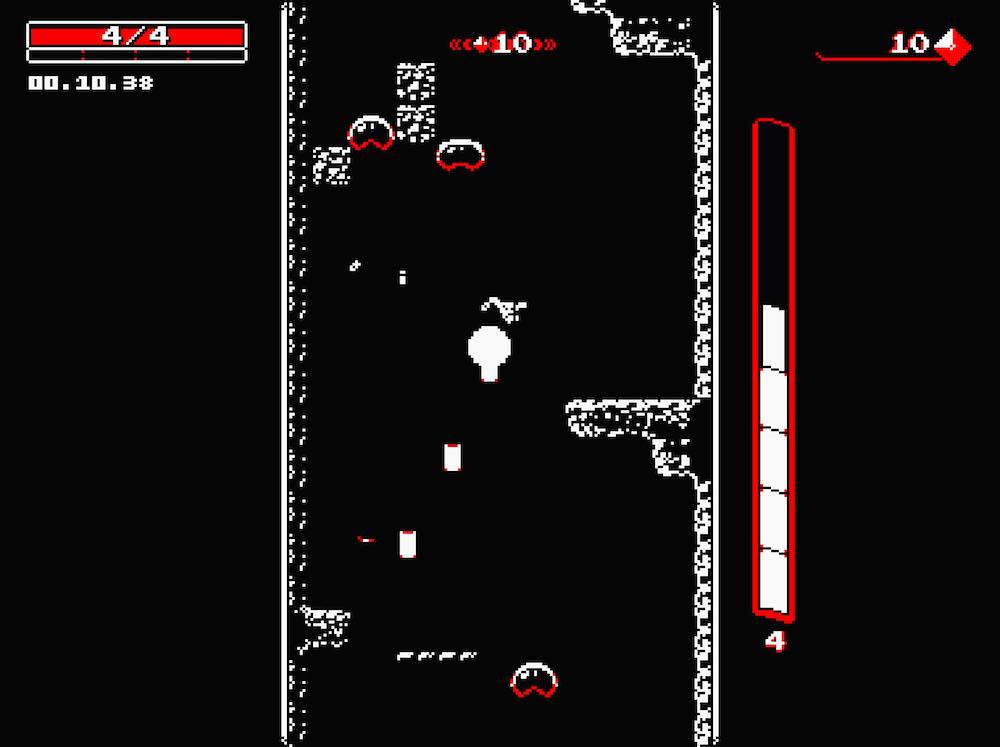 The clue is in the name really: surprisingly enough, Downwell is a game in which you travel down a well. Part endless runner, part rogue-like, the aim of the game is to travel as far down as you can, killing monsters and collecting gems as you go. Just like any typical rogue-like, once you die, it’s game over and back to the start. As you make your way further down into the depths, you’ll come across various caves that you can enter (marked with large “bubbles” on screen). Some of these caves contain shops, others contain stashes of gems or an upgrade to your weapon. Your journey down is broken up into levels, with the end of each level presenting you with an upgrade choice to hopefully make the next leg of your adventure a little easier. These upgrades can be anything from a replenishment of your health, a drone to help you shoot enemies, to a time stasis that appears every time you take damage.

There isn’t much in the way of overarching progression, however. As you play, your total gem count is amalgamated into a grand total and as you reach certain milestones you’ll unlock new skins for the game and new game styles. The skins are merely cosmetic, and change the default black and red colour palette of the game to a wealth of others (including the authentic hues of the Game Boy for the true nostalgic experience, should you wish). The unlockable “styles” are permanent modes allowing you to tweak your experience somewhat, making it easier or harder depending on your preferred playstyles. The rather random “Arm Spin” style for instance, the first you collect, causes your arms to inexplicably flail uncontrollably and makes it so the only pick-ups you find are gun parts. Another, “Boulder”, makes you fall down the well at a faster speed and grants you a higher starting HP.

Other than those, though, all weapon and character upgrades you collect during your run will be lost as soon as you die. There’s no sense of character upgrade or progression; any improvements made are strictly to your own skill. And if you want to get far in Downwell, then you’ll need to practice your skill a lot. Downwell is no walk in the park (well, it started out that way until you fell down a well…). It takes a lot of patience and perseverance to feel like you’re starting to make any progress. Your first several playthroughs of the game will likely last you the best part of 30 seconds; maybe two minutes if you’re really lucky. The game doesn’t tell you anything as you begin; you’re left to figure out everything yourself, from what damages you to how the hell you fire your weapon (hold the jump button, obviously; your gun is your boots). Luckily, everything comes together fairly quickly as you plunge deeper into the well and soon it becomes just a case of honing your skill.

The problem is, you’ll quickly realise there’s not a whole lot to gain by repeating the same fall over and over again. The skins aren’t worth unlocking, and the styles offer only a slight variation in the same gameplay. Sure, Downwell is addictive and enjoyable enough for you to overlook its circa 1980’s graphics, but not enough to keep you hooked more than a couple of hours. It serves as a great example of substance over style, but Downwell is perhaps just too one-dimensional to offer the same degree of longevity that other similar titles may offer.

Downwell is available on PC, mobile, PS4 and PS Vita. We reviewed the PS4 version.