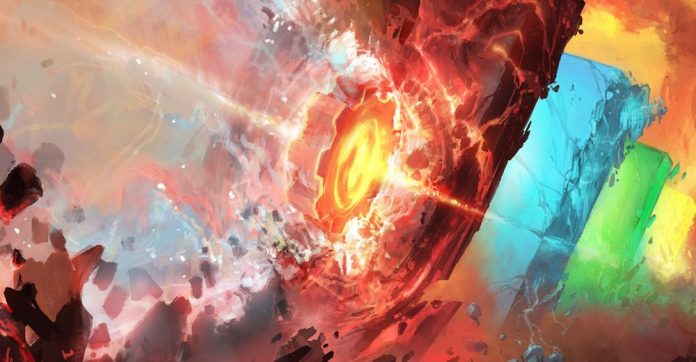 Gear Gauntlet by Nottingham-based Drop Dead Interactive is a no-frills puzzler combining destructible coloured blocks, buzz saws and a spinning gear that glides across a variety of 2D levels.

Promotional material bills the game: “No Heroes Needed, No Villains to Defeat and No World to Save”. This is an honest description but they should have added that you’ll need the patience of a saint to beat it.

Gears of War fans would be wrong to assume it’s only the Chainsaw Bayonet that can carve things up because the gear you pilot shreds blocks like no other. However, the trick is that in order to do so, players will have to quickly press the correct button to colour match the upcoming obstacle. To add to the menace, the screen chases you meaning instadeath is only ever a few seconds away. Your ultimate objective is to complete each level with the highest possible score, and to help you there are bronze, silver and gold cogs hidden through the stages which provide points boosts to those brave enough to look for them.

Gear Gauntlet is an old-school recipe of infuriation, with a sprinkle of elation. To me it feels like a mash up of Tetris, Puzzle Bobble and those morph ball sections of SNES classic Super Metroid. Dying frequently is really frustrating – and you will die loads, especially as the difficulty level ramps up. In fairness to the developers they have mitigated the soul-crushing pain of endless frustration by providing level checkpoints and infinite continues. Ultimately though it’s still really challenging and it’s up to you to decide whether you enjoy this type of punishing, repetitive, retro gameplay experience. 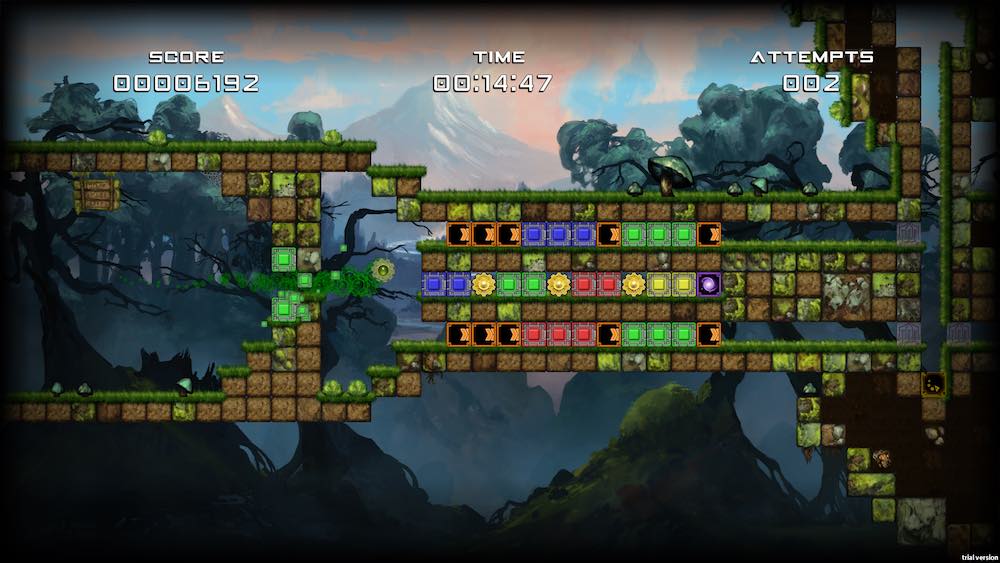 Needless to say there are no in-game cinematics or Quantum Break style TV shows here to give you a break if it all gets too much. In addition, it’s a bit of a slap in the face to labour to the end of a level having died multiple times only to be greeted by a giant “F” score ranking. Imagine spending a lifetime working on the theory of relativity only to have Einstein come back in a time machine and tell you you’d have done more good watching Back to the Future on repeat instead of ever having started. The highest ranking is “S” but you won’t see that often; Gear Gauntlet will flunk you for fun.

The game has some similarities with Guitar Hero because both titles require top reaction speeds and colour matching abilities. The similarity continues in that Gear Gauntlet has a pulsing rock soundtrack to keep you speeding through the levels. There are multiple routes through each but some paths are tougher than others featuring more blocks, additional twists and extra buzz saws. The buzz saws, by the way, will kill you instantly if you hit them. In total there are four worlds to grind your gears on, each with 10 separate levels. The worlds provide a theme for the game’s backdrops and range from woodlands to frozen wastes.

Of course, the big payoff with a game this difficult is the joy of everything going right. You zoom through the stage with lightning fast, accurate, colour matching block busting and you successfully evade each and every deadly buzz saw. A huge “S” (the highest ranking) lights up the screen and you fist pump in the direction of a crowd of adoring fans screaming your name.  Okay so I might have exaggerated a bit, but you do feel good when everything goes to plan – and ultimately that feeling of hard-won success is what makes Gear Gauntlet fun to play.

There is a trend at the moment celebrating really tough games. Well, Dark Souls 3 has a story and Dirt Rally sees you race on the globe’s finest rally tracks. Gear Gauntlet laughs in the face of such pleasantries and can offer Xbox One owners pain that even Game of Thrones‘ Ramsay Bolton would be proud of, served with nothing but a gear, some coloured blocks and a few moving buzz saws.

Gear Gauntlet is available on Xbox One.