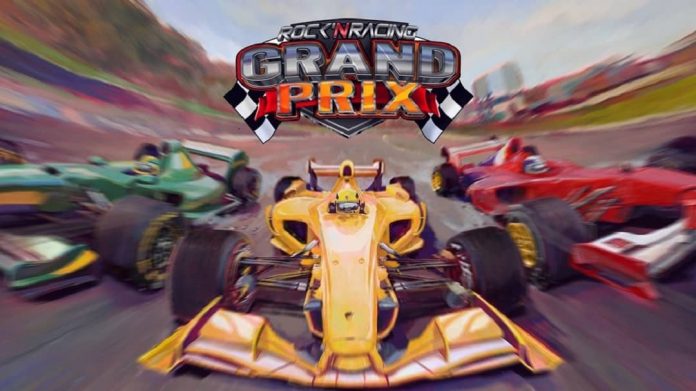 It’s rare I play a game so bad in every way that it makes me want to tear out my own eyeballs just to make it stop. Yet that’s exactly where I find myself with Grand Prix Rock ‘N Racing. It’s not grand, it’s certainly not rocking, and I’d barely even call it racing.

That may sound a little harsh, but I’m not going to beat around the bush: Grand Prix Rock ‘N Racing is a terrible game in almost every way. If you are hankering for a new racing game and see this pop up in the store, save your money and go find some snails to race in your back garden instead. Trust me, you’ll get a hell of a lot more excitement and much less frustration out of it.

First off, let’s start with some positivity. the presentation of Grand Prix isn’t all bad. It looks like something from the late nineties, sure, but its innate simplicity has a certain undeniable charm. Thanks to the top-down viewing angle, the track dominates most of your screen, and the sidelines are decorated with pixellated spectators and blocky trees, coaches and aeroplanes. The vehicles themselves are typical Formula 1 style – it’s a shame they’re only about a centimetre long so we can’t actually make out any details on them. 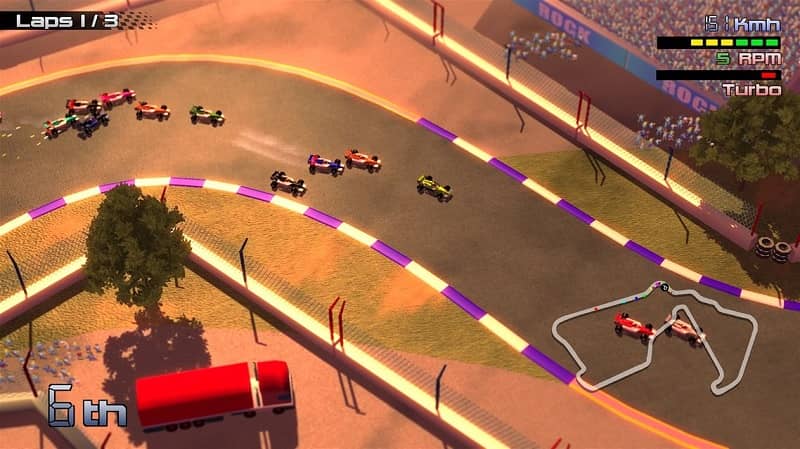 The actual gameplay is where things very quickly and very drastically go downhill. From the very moment you begin a race and hold down the accelerate button only for your car to take around five seconds to actually begin moving anywhere, you know you’re not going to have a good time. When you finally gain some momentum and reach your first corner, the awful control scheme will more than likely see to it that you crash and grind to a halt – leaving you with another dreadfully slow start off the mark. For a very simple top-down racer, you’d expect very simple controls to match, but unfortunately Grand Prix Rock ‘N Racing seems to have something of an identity crisis. It seemingly wants you to play as if it’s Gran Turismo; slowing to a halt before turning corners and selecting careful racing lines around the track. Unfortunately its viewing angle means that playing as such is nigh on impossible; couple this with the other 19 cars that whizz around you in Championship mode, running you off the road or skidding and blocking your path – it all makes for an incredibly frustrating and mind-numbing experience.

The Championship mode is where the main substance of the game lies. There are 10 races to compete in, with an overarching leaderboard to climb your way up – or at least attempt to. After completing every race, you’ll be granted an upgrade to apply to your car – the typical options apply: speed, acceleration (or, er, “aceletation” as the game shamefully spells it), brakes turbo and tyres (“tires”). (A spelling check clearly was not high priority with the development team.) These upgrades are necessary in your chance of success, although you’ll have had to grit your teeth through several abysmal races before gathering enough tokens for your upgrades to become noticeable. The chances are you’ll have given up with the game way before then.

Grand Prix Rock ‘N Racing also offers up a time trial and multiplayer mode. Time trial lets you loose on each of the tracks playable within Championship, but this time you have the road to yourself and your only opponent is a timer. Multiplayer can be played either on your own (go figure) or with up to three other friends on a tailor-made race. You can tinker with free upgrades here and choose whether to play by yourselves or with AI opponents in the mix too. The Championship mode can also be played split screen with one other player if you feel like punishing a friend. 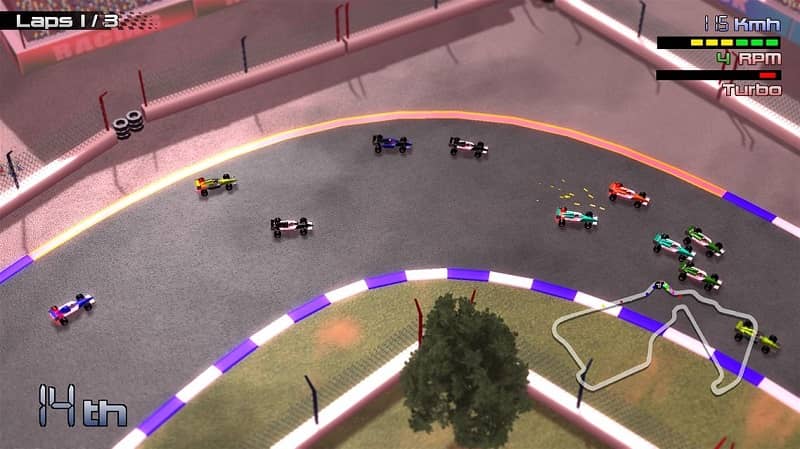 Probably the most grating thing about Grand Prix – aside from its awful gameplay and awful controls, that is – is its absolutely terrible audio commentary. As soon as you start, you’re subjected to an excitable narration constantly repeating the same lines: “This is just amazing!” and “This race is on fire!”. Maybe if it was on fire it would at least be a little more entertaining.

With several upgrades applied to your car, Grand Prix Rock ‘N Racing can become bearable to play – but that’s just it; bearable. And for it to reach that “bearable” point, you’ve got to put in far more time than your wits can probably handle, so it’s just not worth it. Had the control scheme matched the casual arcade nature of the game it may have been slightly more enjoyable, but as it stands, there’s nothing to gain from playing Grand Prix Rock ‘N Racing. Do yourself a favour and keep a wide berth from this title. For the love of God, stick to Forza. Or snails.

Grand Prix Rock ‘N Racing is available on Xbox One.