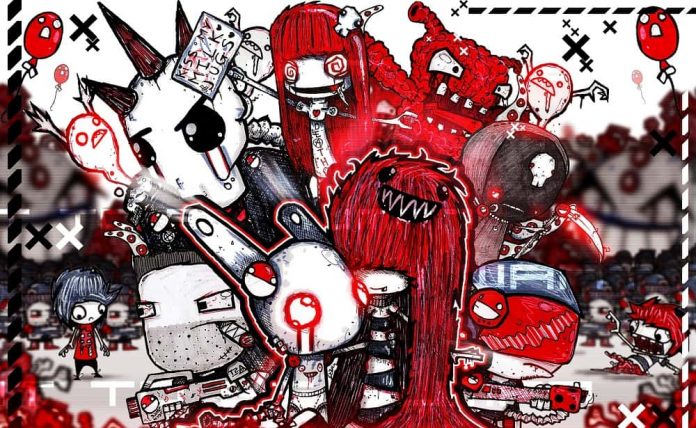 I blast a prison officer with my shotgun and his body erupts, forming a shower of limbs and dismembered bits that fly into the air and abruptly land with a squelch by my feet.

A boy meets a girl, they fall in love and an evil corporation wishing to take over the world turns the girl’s boyfriend into a hat, and the girl into a vampire – you know, that old chestnut. In a quest to restore their humanity, she grabs her shotgun (naturally) and embarks on a bloodthirsty rampage of death and destruction. I Want to Be Human‘s story is presented in a comic book style dominated by illustrations that look like they’ve been jotted down by a kid who’s not been listening in class. Exchanges between characters are scrawled in black and white, with light hearted exchanges playing along with the rebellious nature that underpins I Want To Be Human. There’s a tongue-in-cheek attitude to the way the story pokes fun at video game tropes, aware that it’s not taking itself too seriously. And unfortunately it’s cringeworthy, at least for me. I’m all for silly dialogue, but it has to be done right otherwise it can come off as childish. As I blasted through enemies, my character hurled insults that would probably roll off the tongue of a 10-year old who’d just discovered some naughty words, mashing them together to form some incoherent spiel.

Diving into the story mode, I Want To Be Human’s art-style instantly reflects the teen punk feel, as everything is illustrated in black, white and red. It stays in tune with the cutesy yet gory theme and actually comes across as rather unique. You start in a hub area where you can warp between five different worlds that unlock as you progress. Each world has several levels that you can battle your way through, and in the end you’ll gain a ranking that reflects your performance. It’s pretty staple stuff, but the levels are varied enough to keep you interested. Some might have you side scrolling through a simple level of jumps and platforms, whilst others might have you dashing to stay on screen as ceilings collapse and enemies knock you backwards.

Armed with a shotgun you can shoot at a short distance, encouraging you to get up close and personal. You can jump and with another button press (or controller button press) you can double jump. When you climb higher, your hat – who happens to be your boyfriend – flaps his ear covers, functioning as makeshift wings that slow your descent. Sliding down walls is also essential, as is dashing forwards to avoid lasers or enemy attacks. For the most part, platforming felt dynamic, and combined with a shotgun, blasting enemies was satisfying and ultimately pretty enjoyable. 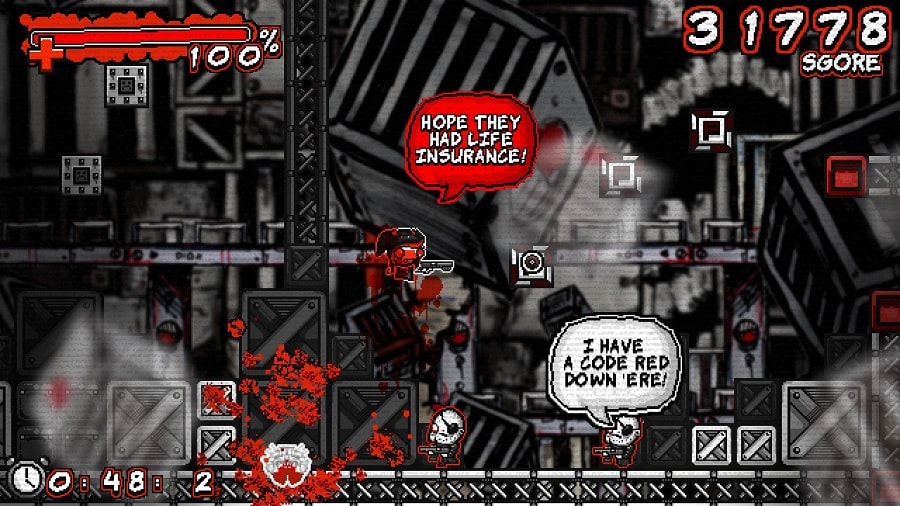 The tight environments have a part to play in this, making sure you’re weaving in and out of tunnels or hopping on open platforms, dodging missiles and tiptoeing around spikes. I found them to be well designed, with elements that often caught me by surprise. Bouncy cubes sent me skywards so I could scale a large wall and – if timed correctly – avoid the missiles flying across the screen. Platforms might be ticking time bombs, and switches can be hopped on to reveal a hidden area that holds a shiny key. Keys unlock certain cubes that you might’ve encountered earlier on, so you’ll have to backtrack through that tricky section again in order to get there.

The most exciting levels involved less shooting and a greater focus on precise platforming. I distinctly recall one scenario where I had to double jump and float my way past spiked protrusions and missile launchers. I then had to sidle left and deal with a couple of enemies blocking my way, before hopping between walls and lasers that were far too close for comfort. Reaching the top, I had to dash forwards and time my landings on three small columns, separated by menacing, rotating saw-blades. Each column also had a laser beam running through it that would turn on and off at certain intervals. Making my way through required some nerve, and it didn’t even end there. In the rare instance I made it through, I’d have to plummet from my short-lived ascent through – yet more – spike-walled columns and hairy tunnels that barely accommodated my torso as I slipped downwards.

At its most frustrating, I Want To Be Human is at its best. There isn’t a huge variety of enemies and bosses weren’t exceptionally thrilling; but the intense, demanding platforming was superb. But at its best – it’s also at its worst.

Enemies often act as cannon fodder and only require a couple of shots to kill, whilst stronger enemies follow a strict routine that’s effortlessly exploitable. Splattering their entrails across the screen also means they’ll splat on the floor, and picking them up regenerates your health. They might not be challenging, but they’re useful for regaining lost HP and making you feel cool as you stylishly dispatch them during some tough sections. The toughest enemy happened to be the environment, but also the jarring movements of my character. Although the platforming is fantastic, it’s hindered by I Want To Be Human‘s inability to register the subtlety of my button presses. Sometimes little hops morph into monster leaps, and frantic presses of the dash button just don’t seem to register. Perhaps the most frustrating mechanic is the way your character yells “oww!” as he gets hit, knocking him backwards ever so slightly. In this small snippet of time, you lose control of your shotgun toting, punk child. It’s bearable in certain scenarios, but when you’re attempting to navigate through a series of laser beams (or other tricky scenarios), one slip up could fling you backwards into the beam – or assortment of painful machinery –  you’d just cleared. You’re then subjected to a horrific cycle of “oww!” and a constant loss of health as you want to dash forwards out of harms way – but can’t because it’s suddenly decided to become unresponsive in the thick of anguish. 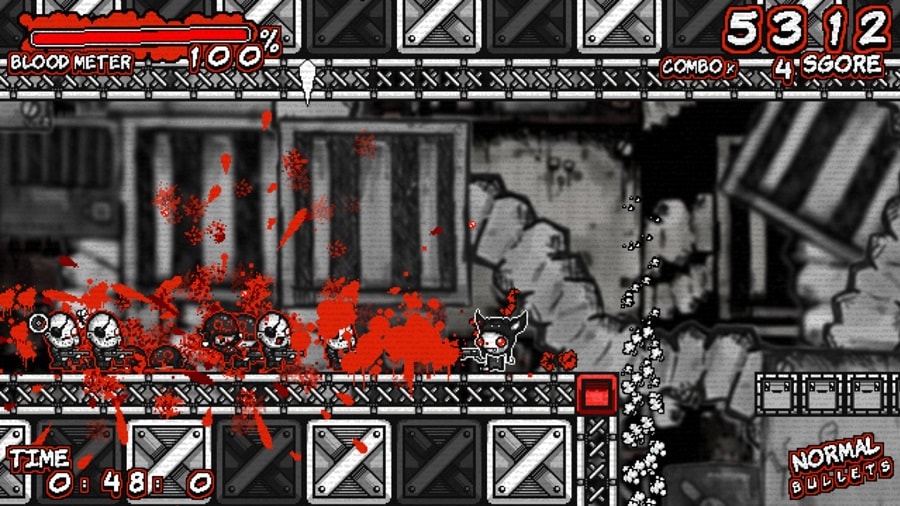 Looking past the crude, childish humour I’d say there’s a decent experience to be had with I Want To Be Human. Sometimes you’ll become frustrated with the controls, especially if you’re playing with a keyboard and mouse – the WASD option didn’t seem to register. Sometimes you’ll be on the verge of a rage-quit, and other times you’ll cringe yourself off the face of the earth. However, if you peer through your fingers that’ve smushed into a face-palm, you’ll begin to appreciate a fast-paced, bloody platformer that’s got a neat aesthetic and pretty entertaining gameplay to boot.

I Want To Be Human is available on PC.