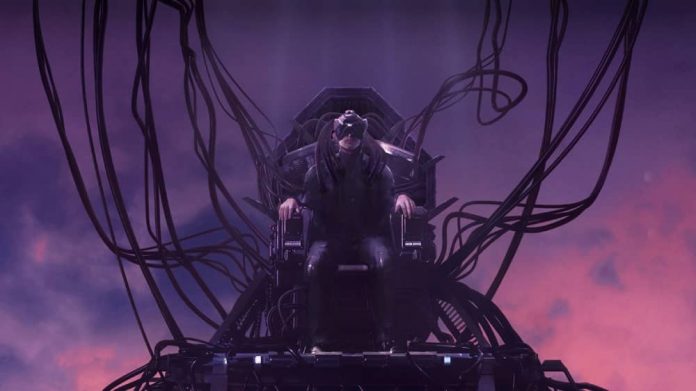 If you want to understand Neon Chrome, then forget everything you know about top-down shooters. Well, maybe not everything, but most of it. Death isn’t the end of the game anymore; it’s actually the start.

Neon Chrome, brought to us by developers 10tons, claims to be a “ruthless top-down cyberpunk shooter” which is a very exciting mix of words. Few games would go so far as to call themselves difficult, let alone ruthless, and given the current trend of first-person shooters where sticking the iron-sights up your nose is all part of the realism, a top-down 2D shooter may draw a few sniggers from those at the back. As you’d come to expect, the game has the usual flavours of guns, and a few classic sci-fi additions like laser rifles and Ion weapons. You can upgrade the damage inflicted, the magazine size and everything else a shooting game has done before.

Neon Chrome gives you a “loyalty” system for using the same weapon, adding to your own upgrades. And I don’t mean using the same type of weapon; I mean the exact one – which is tricky because when you die, you lose it for good. You can increase the damage in general, but you get unique upgrades in the levels. Along with your chosen death dealer, you can upgrade your character stats to reap better rewards, discover new cybernetic enhancements to give you the edge when the going gets gritty and build up your health and energy so you can survive for longer. Neon Chrome offers over four dozen cybernetic enhancements from health and protection improvements to defence and assault systems. You can spend just as long tweaking your stats and layout than you do actually playing the game. Until you die. 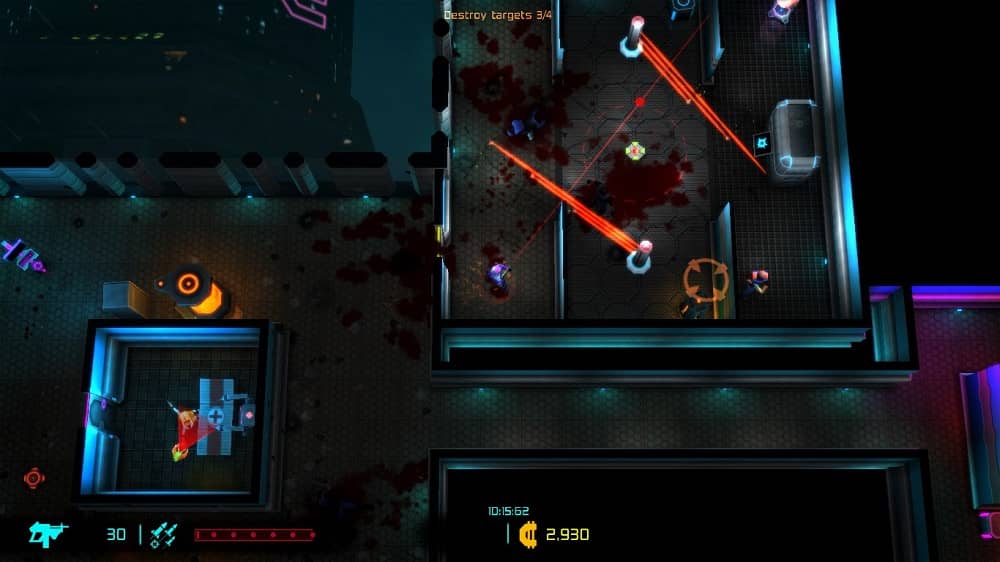 Dying isn’t the end of everything in Neon Chrome though. Yes, you’ll lose your level progression and whatever weapon you were blasting said level to bits with, but each death is a start of an entirely new game. Those enhancements you’ve spent your money on? They carry through to every character, but for a set amount you can alter the stats of the next random person you’ll become via neurological link. Your actual playable character doesn’t go into battle, but takes controls of those in Cryogenic sleep who do it for them. Imagine The Matrix where death doesn’t matter. Each start gives you three class choices which are chosen at random, but each character will be unique. There is a set mix of classes, from “Hacker” to “Cyber Psycho”, each with their unique traits. The Hacker, for example, has a flying drone that kills enemies with you, and the “Corporate Soldier” has a riot shield that can soak up bullets. I’ll admit that starting from the beginning every time you die can get frustrating, especially during a boss fight or just after one.

The size of the game is impressive in its own right, but the levels themselves are procedurally generated which results in larger amounts of content in relation to the size of the file (this game is only 256MB), and the levels themselves are generated at random in terms of layout/terrain/enemies/objectives/etc. It pretty much means no two levels will be identical. For the most part, this did live up true to form, although there were instances of where the game seemed to generate nothing but “Destroy X objectives” for several consecutive levels; my personal record of which was three in a row. That aside, the levels vary from small and frantic to large and tactical, with bonus levels thrown in every so often marked by a purple checkpoint. These could range from mini-games such as running the gauntlet to just giving you a load of bonus items and weapons. The inclusion of these optional games helped break up gameplay – and the rewards were always welcome! If you find yourself getting bored during the solo campaign, there’s also the option to do four-player coop and really bring the pain. One person destroying the scenery against the AI is bad enough, but four powered-up cybernetic humans doing it is something you really have to see to understand. And once you do, you’ll want to dive right in! 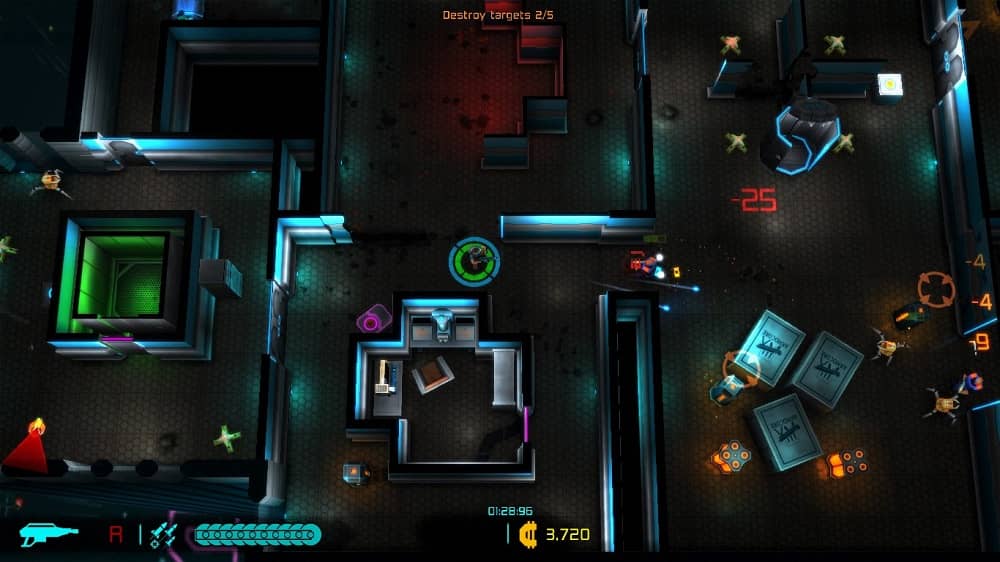 A lot of games will boast “fully destructible environments” but Neon Chrome really does follow through. Everything bar the level limitations can be destroyed in the crossfire, whether to create a new route or just because. There’s an impressive amount of detail that’s gone into the scenery, and even more so when it fragments into little pieces, leaving burn and scorch marks behind and rubble that looks the part. Can’t get round a door? Shoot through the wall! Make your own path and reap the rewards, as some lootable items can only be obtained through breaking the scenery, and most breakable things will reward you with money and energy. Even the bodies of your human counterparts can disintegrate or slump to the floor in a way familiar to anyone who’s seen any action film. Some top-down games are limited by what they can offer as you are only ever able to move in the 2D plane, but Neon Chrome solves this by making sure you never disappear from view when behind a wall/object. Your health bar rotates around your feet, so you’re easily seen against the background, and thanks to the laser sight acting as your crosshair and direction indicator, you always know which direction you’re pointing. It’s frantic and it’s really tense at times when you get swarms coming from all angles or trying to fight off a boss, but it’s never impossible. You’ll die plenty of times playing Neon Chrome, but each death is a new chapter. And it’d be a shame to keep all those characters waiting around forever.

I can’t recommend Neon Chrome highly enough; largely because it’s so different and isn’t afraid to be so. Sure, the need to constantly restart after dying can get frustrating, as can the lack of save points, but if anything, this just spurs you on to keep on trying and perform better next time. It’s fast, it’s frantic and it’s hairy, but Neon Chrome will undoubtedly keep you coming back for more!

Neon Chrome is available on PC, PS4 and Xbox One. This review is based on the PC version.