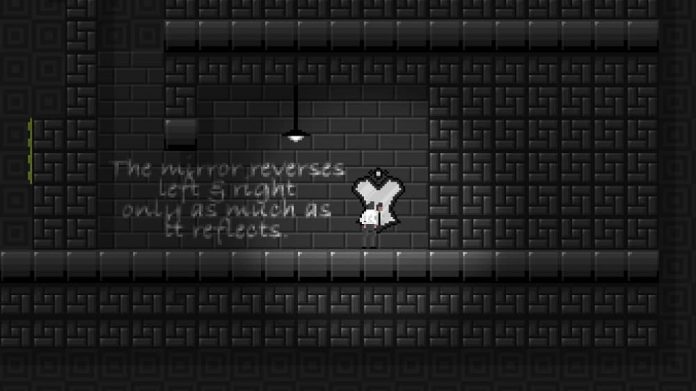 (How disorientating is it reading these words? Chances are that you can’t read them. If you can, you may well enjoy the challenge but if not, I doubt this has been much fun for you. That, my friends, is the issue with RETSNOM.)

RETSNOM‘s gameplay is straightforward, if nothing else. What we’re dealing with here is a dimension-shifting dad, desperate to save his little girl from being a zombie for the rest of her days. Knowing there must be a cure, he sets out on a mission to the future to find it. Also he can use a mirror to move the environment for some reason. Perhaps you’re starting to see where the wheels fall off this one.

On your travels you discover a mirror which grants you the ability to flip a 9×9 section of your world from right to left. You get a preview of the section you can flip by holding circle, which helps to prevent issues like removing the floor upon which you stand. This mirroring can move walls out of your way or create a bridge across a gap in the floor. You can even use the mechanic to smoosh (that’s a word) zombies behind a wall, if the gun you find a few levels in just isn’t doing it for you. To begin with, this is interesting and enjoyable as you swap your way through the levels, collecting stuffed pink bunnies (bonus items) for your daughter along the way. After a while though, the novelty wears a little thin. Eventually, you’ll reach a new world and a new mechanic is introduced, like instead of flipping your world from side to side, you can flip it up and down. The first of these mechanics, fogging, is a result of the rain in the new world; flipped objects will now fade away into obscurity over time. This can be useful for removing obstacles – just flip and wait for them to fade – but also causes problems for traversal, whereby if you used some flipped blocks as a bridge, that same bridge is now rapidly disappearing under your feet which adds much needed urgency and panic into an otherwise sluggish game. 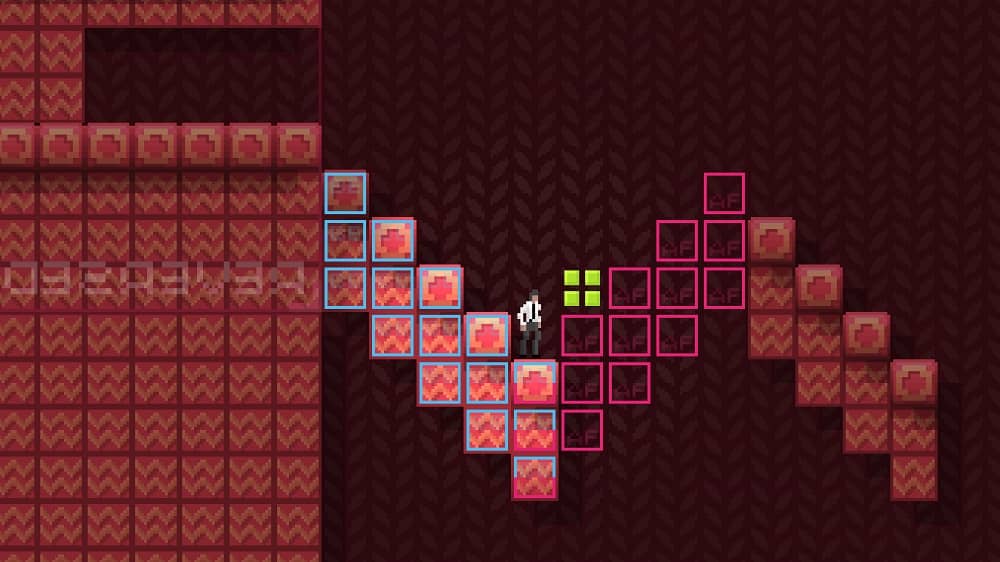 The trouble with this new need for speed, is that the stodgy controls and limited camera options make any movement that isn’t left, right or using a ladder awkward and usually fatal, as your slight misjudgement sees you plummet into the abyss below the level. Sometimes you’ll need to mirror a section while jumping or falling and this is challenging, too. The minimal camera adjustments allow you to preview the level slightly above and below you, but once you let go of the right-stick, the camera snaps back to a small area surrounding your character. You can also preview the whole of a level you have previously completed with a click of R3, but again, move and the camera snaps back to normal. You’ll need to collect the pieces of a (usually hidden) door as well as its key, before you can move on to the next level and the camera is handy for locating those, if nothing else. Don’t get me wrong, I don’t need my hand held during games and I appreciate RETSNOM‘s hands-off approach to a tutorial in this game as the story and controls are explained well without one. It’s just the nagging sense of “I know what to do, I just can’t do it” as you wrestle both the controls and your own sense of co-ordination in a way that should be fun, surely, but isn’t. And don’t call me Shirley.

This fairly unenjoyable and unremarkable side-scroller takes place in several bland, two-dimensional worlds of around 12 levels a piece, populated by a number of zombies who stumble around until they see you, at which point they’ll pelt towards you and need to be either avoided, smooshed (there’s that word again), dropped into oblivion by removing the floor or shot in the face. They don’t really present too much of a challenge in this respect and seem only to serve as a distraction from the central puzzling. At some points, RETSNOM doesn’t seem to know if it’s a puzzler or a platformer and the confusion is handed to the player as your level of control over the on-screen character simply doesn’t match up with what you need him to do.

Once you flip your first frame, the game is immediately reminiscent of the far superior and frankly fantastic Fez, where you rotate the world to solve puzzles. The difference being that the world of Fez, despite also being 2D (sort of), contained so much detail and vibrancy that simply looking at it was a pleasure. The dim and bland world of RETSNOM is the total opposite of this; oppressive, depressing and boring. Sure, some of this works in its favour; after all, the first level is set in a dystopian, zombie-filled science lab, so for it to be empty, quiet and made of blackish grey blocks makes sense. It’s when you move on to the next singularly-coloured world of greenish blocks that it feels lazy. The last time I saw this few colours on-screen at once, I was playing Space Invaders on the Atari 2600. Even Frogger had more life to it and I’d definitely rather play that. The same problem persists in the wearisome story which is both fairly intelligent and yet predictable at the same time. After the first “twist” you’ll likely see where it’s going and it offers only feeble attempts to intrigue you or to tempt you to play on. I think it says something that one of the most interesting parts of the game is the ability to tap L1 to repeatedly smash your head on the ground until dead, should you become stuck or otherwise wish to reset to a checkpoint and at times, the option to do this in real-life becomes preferable to playing on. 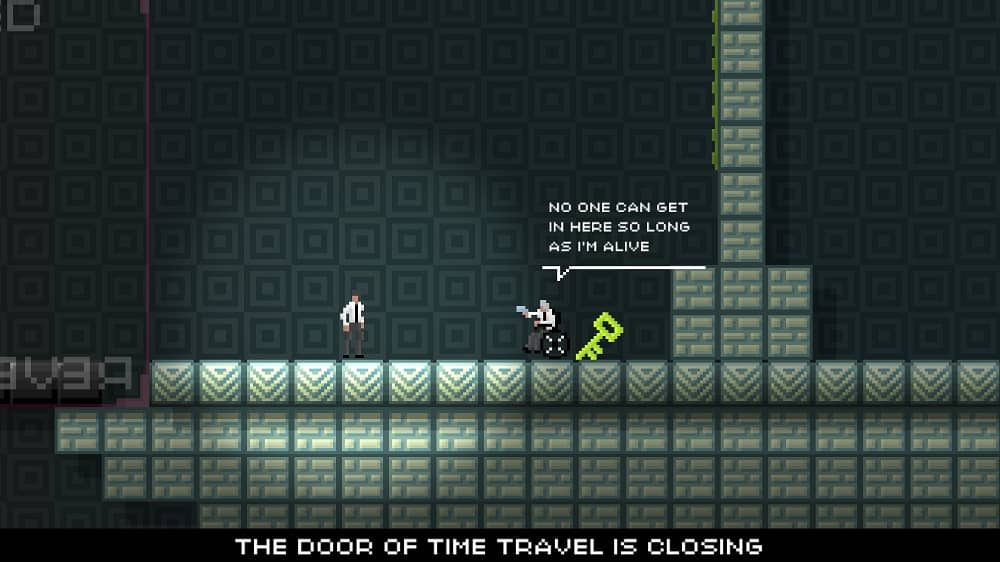 The music does little to lighten the tone, either. Yes, it helps tell the story with sombre sounds to accompany the characters sense of loss with a mixture of hopeful flurries and melancholy later on, but it’s mind-numbingly dull. A lot of your time will be spent just standing around, examining your options and considering your next move, so to hear the same short track repeated or (perhaps worse) to hear it stop entirely, leaving you in a vapid vacuous volume vacuum to listen to nothing but your own frenzied footsteps, feels like a sentence passed to you for the developer who’s found you guilty of stupidity. For its faults, even Not A Hero has a chiptune soundtrack to keep your spirits up whilst simultaneously stabbing you in the pride centre of your brain with its difficulty spikes.

On the flip side of all of this, there’s a quality feel to the game and I didn’t notice any bugs or technical issues while playing. You can also feel the developer’s genuine dedication to his work and that does take the sting out of some of the more painfully frustrating patches. Developer SOMI‘s history is a short and mixed bag and I think RETSNOM is a step in the right direction. It offers a story, of sorts, and some genuinely interesting and intelligent gameplay mechanics which are well implemented, but it’s the crucial fun element that’s missing.

There are some good ideas in RETSNOM, but unfortunately they fall by the wayside as the tiresome visuals and dreary soundtrack wear you down to the point where you just wish it would end. “I wouldn’t waste a wish on that,” you say. You would. After an hour or so of mindless running, clumsy jumping and confusing and disorientating mirroring, you definitely would as while RETSNOM may offer fun for some, it’s predominately a largely repetitive slog that isn’t worth your time, especially with the sheer number of indie titles now flooding the market.

RETSNOM is available for PC and PS4. We reviewed the PS4 version.